Last week Jamin and I jumped on the Mad Men bandwagon. They had me at headboard.

Let it be documented that I am probably amongst the five trillionth person to say I am absolutely obsessed with that headboard… and the blue in their foyer (I’m pretty sure it’s Benjamin Moore’s Wythe Blue) and the wall paper in their dining room…and there’s some deep dark secret part of me that wants to wear fluffy nighties with ten fluffy layers and perfect hair and smoke in bed. (Not really… But they make it look so glam.) I would settle for some of those un-pc candy ciggies I played with in the 80’s that they’ve now deemed bad for children. Those were so fun. Right alongside those hot wheels they painted with lead.

My version of rebellion. I really push my own envelope sometimes. 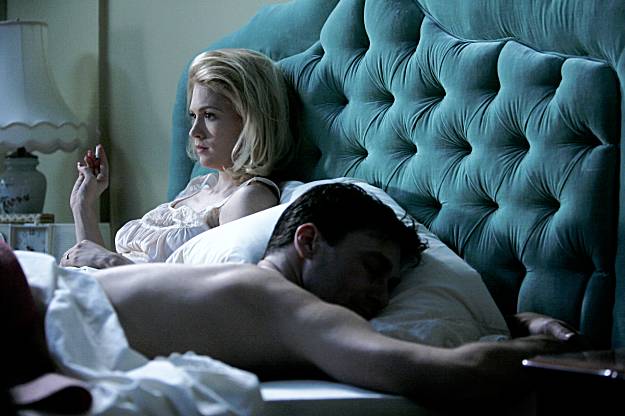 I know we’re like, 6 seasons behind… but Don is kind of a skeez. And I’m all about flawed characters, but this is like top level skeezdom. One moment he has this totally likable character and you find yourself going all gaga over what great potential he has. And the next, you want to throw some of their perfect mid century china at his head and be all, “Sheesh Don. Grow up. You are not in college. Pick a life.” We’re about eight epi’s in, and debating staying with it… (no spoilers, please) Because I kind of want to see Betty’s character bloom a little more beyond perfectly cooked roasts and petty slaps at a grocery store. And Peggy needs to get some self respect and become a writer… and Peewee Herman whiney butt guy has GOT to go. As in, I wouldn’t be sad if they wrote him off by having him step in front of a bus. Jerkface.

But in the meantime, there’s no denying the eye candy that is the fashion and setting, along with the outbursts of laughter in blatant disbelief at the ridic sexist/racist attitudes of the day. And then the realization sets in that this is our grandparent’s generation. And it kind of makes you think. Surely they’re exaggerating a little, right? I sit back and wonder what three generations more will be a riot for them… about us? I think that’s why we’re still watching. It makes you think. And laugh in blatant disbelief when you realize that the mom just took their dog for a walk, and you’re all, where are the kids? And then she mentions that she left the baby sleeping down the block… probably next to a smoking ashtray. I’m not trying to be judgy or anything, but can’t you get arrested for that kinda stuff today? Stellar.

They’re going to make a show (based on the book) about blogger parents written by their children… but that’s a hilarious (somewhat terrifying) topic for another day. If that’s the case, January Jones (or her cloned great granddaughter) can definitely play yours truly. But all things scandal and ridiculous ideas aside, there’s just something about that mid century mod look that I’ve always been in love with that I keep coming back to.

And a touch of this. (You’ll love this fun company-be sure to check out their site)

All-the-way vintage mod certainly isn’t our style. But there’s something you have to love about the mix of it all.

I keep coming back, after all these years, to Amy Butler’s home. I think that saving files and drooling over them all over again is a great way to know if you really love a style or if it’s just a passing trend in your life. (Hello, Pinterest.) And there’s something about that house and how they took reclaimed floors and threw in touches of classic, and eclectic and beautiful colors and her own creations… that I adore.

It’s the idea of taking something from the past, and making it our own… making it relevant for today. I love that about the pieces we choose in the process of making a home. I also love the idea of throwing the rules out the window.

And that’s why I’m still so in love with truck furniture.

So as a nod to the wonderful eye candy that is Mad Men, we rounded up a few of our fave mid century finds. 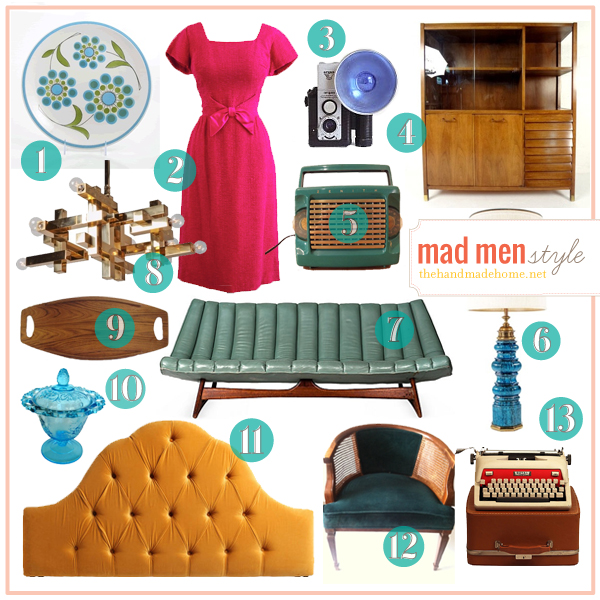 So now it’s your turn: What are some of your fave mid century things that you own? Everything I see reminds me of my grandmother’s house. She was stylin’. What would you like to add to your collection? And more importantly along the lines of all things couch potato…should we keep watching, or quit while we’re ahead? (No spoilers, please!)