You are here: Home / confessions / the story of a tree

This is the story of a tree.

Almost five years ago, we were searching for a house. It was an event we thought might never happen, since it had taken over a year for our first house to sell in a bad market. I was exhausted and hangry when we took a break from searching that day in Franklin. I was ready to quit, feeling overwhelmed with small yards and outrageous pricing differences. Our future felt so unsure. But there was something about this tree in the yard of a little white house in a simple listing I’d saved. It had these two swings hanging from it. Something about its nostalgic charm pulled us in.

We decided to give it a look. And we fell in love. 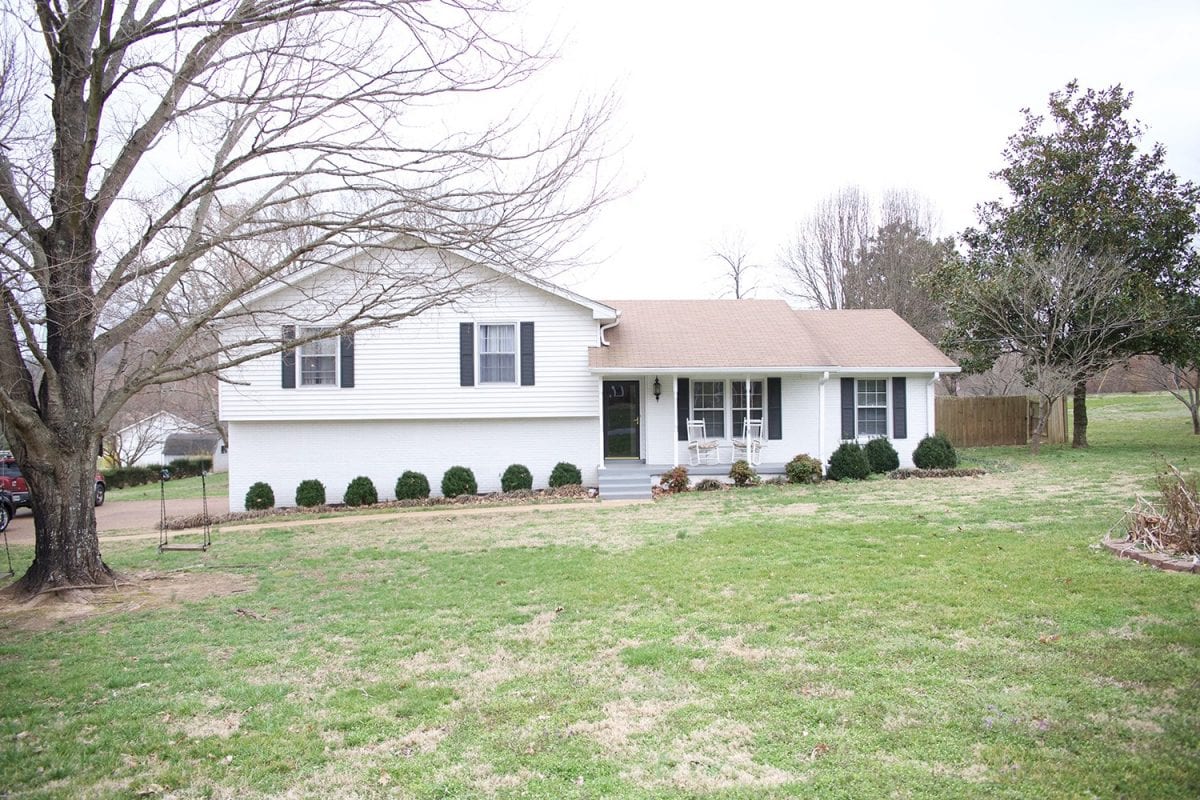 It didn’t make any sense, really. The house was too small for our needs and it needed a lot of work. A complete overhaul. But we saw potential, and we knew that we wanted a big yard to build memories and a life with our children. 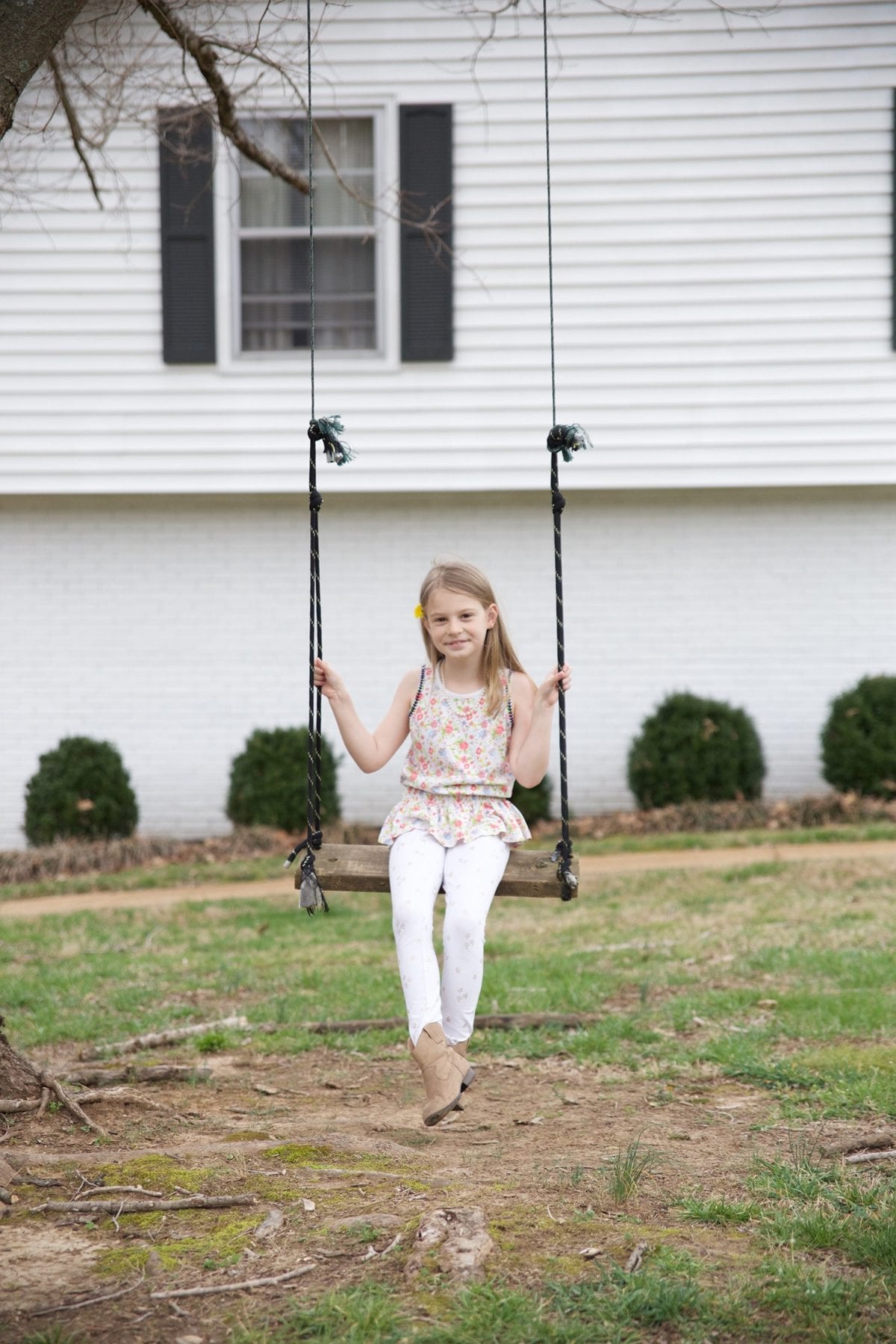 When I look back of those first days, these moments are the ones I remember. How much the kids loved playing in the yard while we talked with high hopes and big dreams for our future. It was a scary leap for us, when we moved our entire business and changed the trajectory of our family.

But then we had these visions of our kids, playing in a yard. Swinging on a big tree. 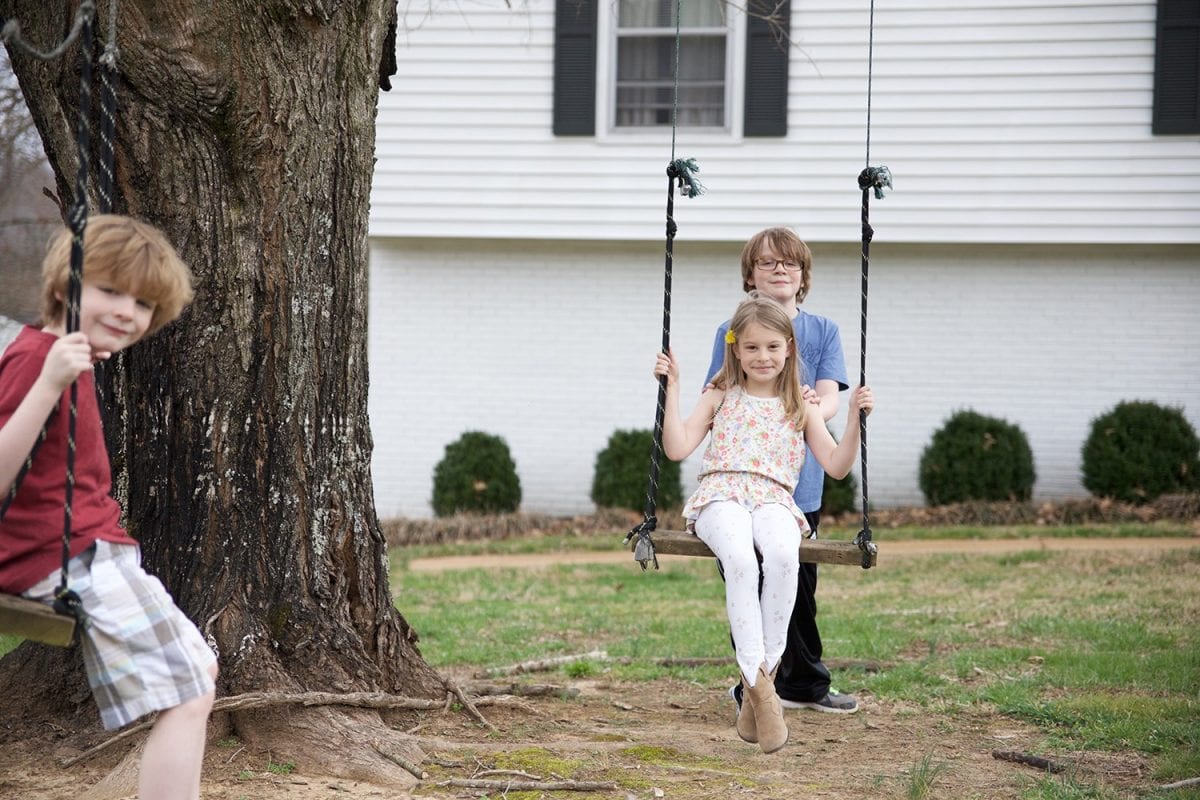 When my parents saw the house, my dad proclaimed it to be a great climbing tree, and promptly did just that.

I snapped a photo quickly in between fits of laughter, and it became a running joke that we chose the entire house because of this silly tree. 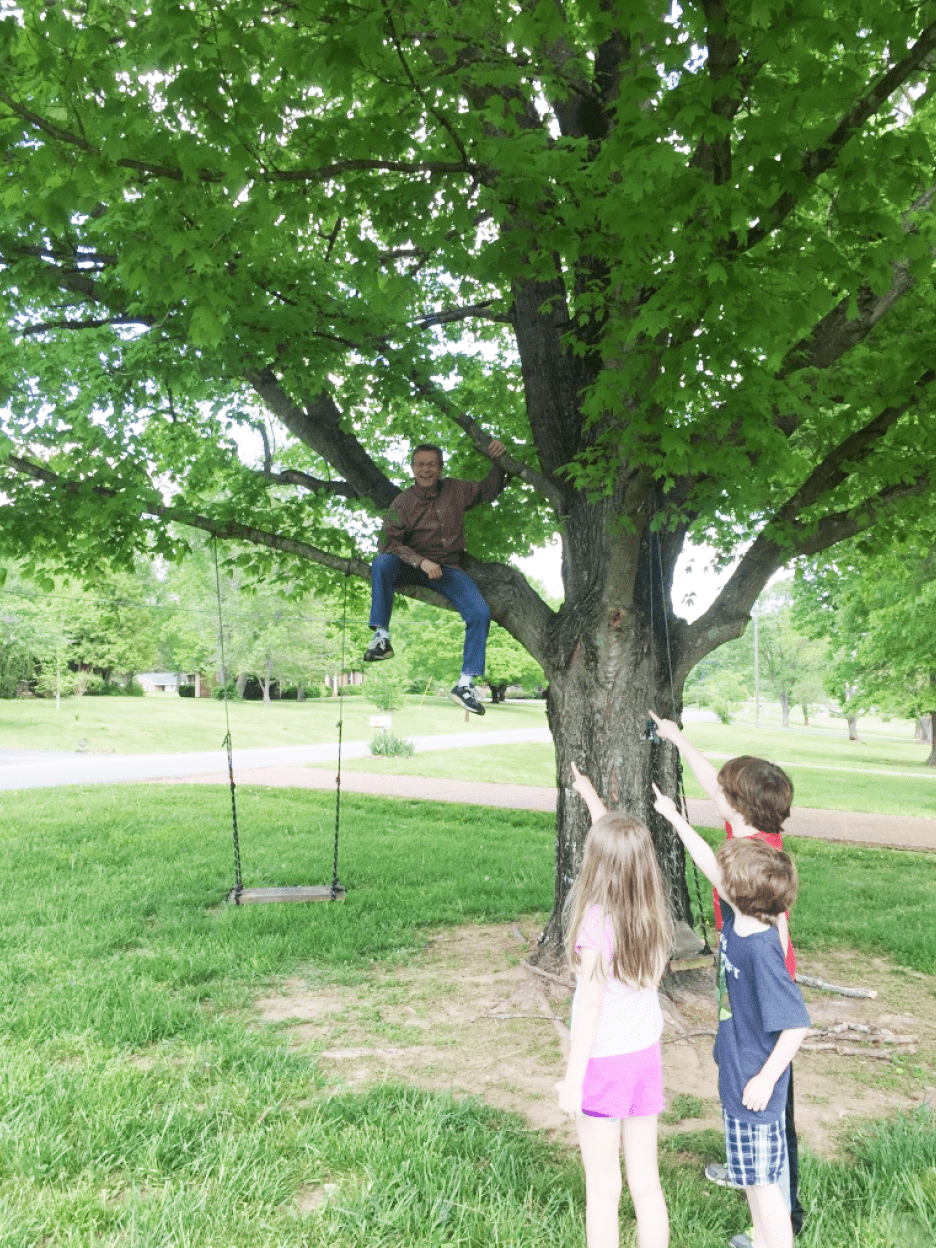 So we took the leap. We started building a life here.

And as it so often does, that life really became a blur. 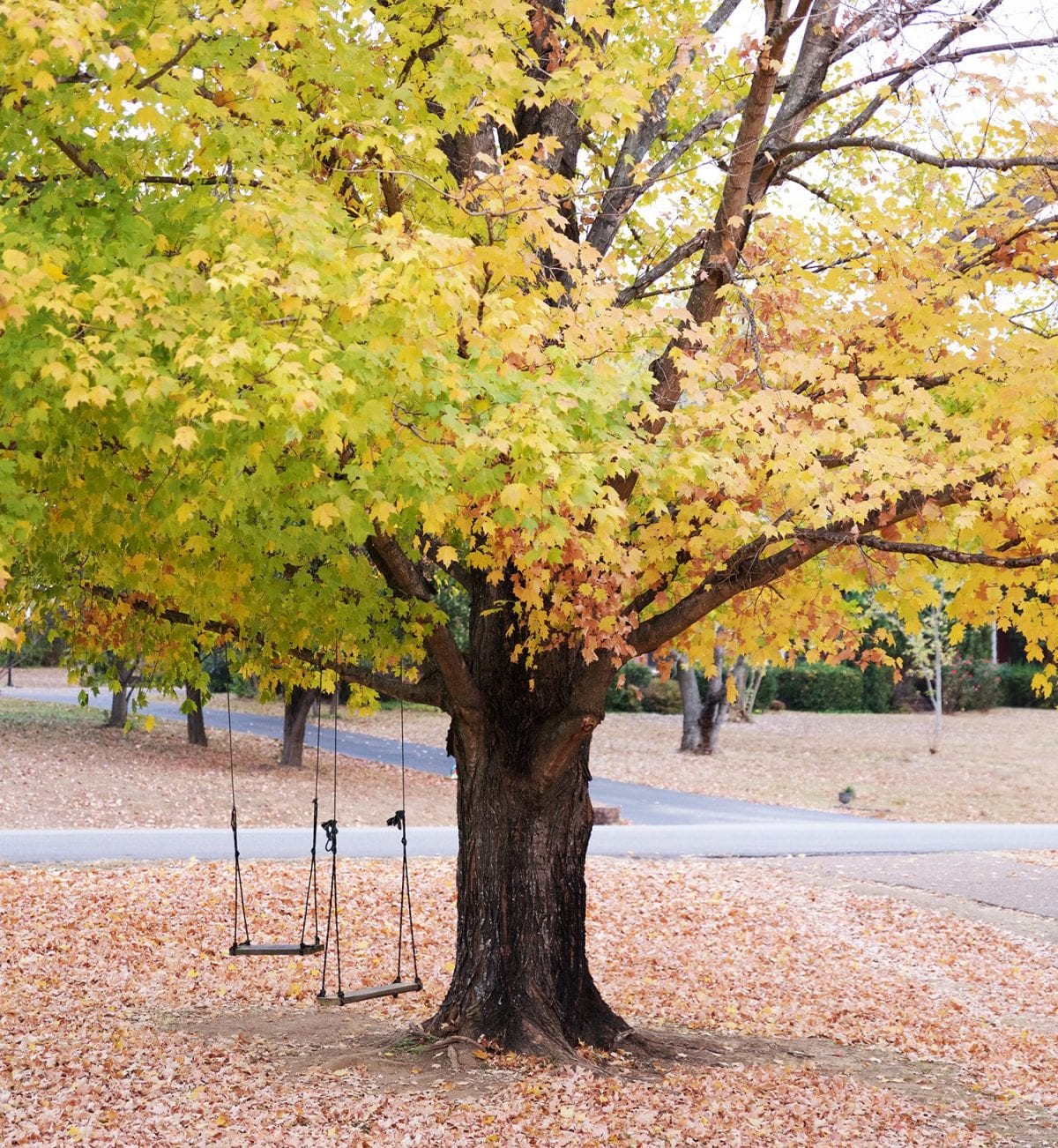 Call it divine intervention if you will, call it trusting your instincts. Call it delusion. But I believe we found this house for a reason. And the following four years became shaped by our choices. The new friends we made, the community we became a part of… It’s crazy to think it all started with a tree. 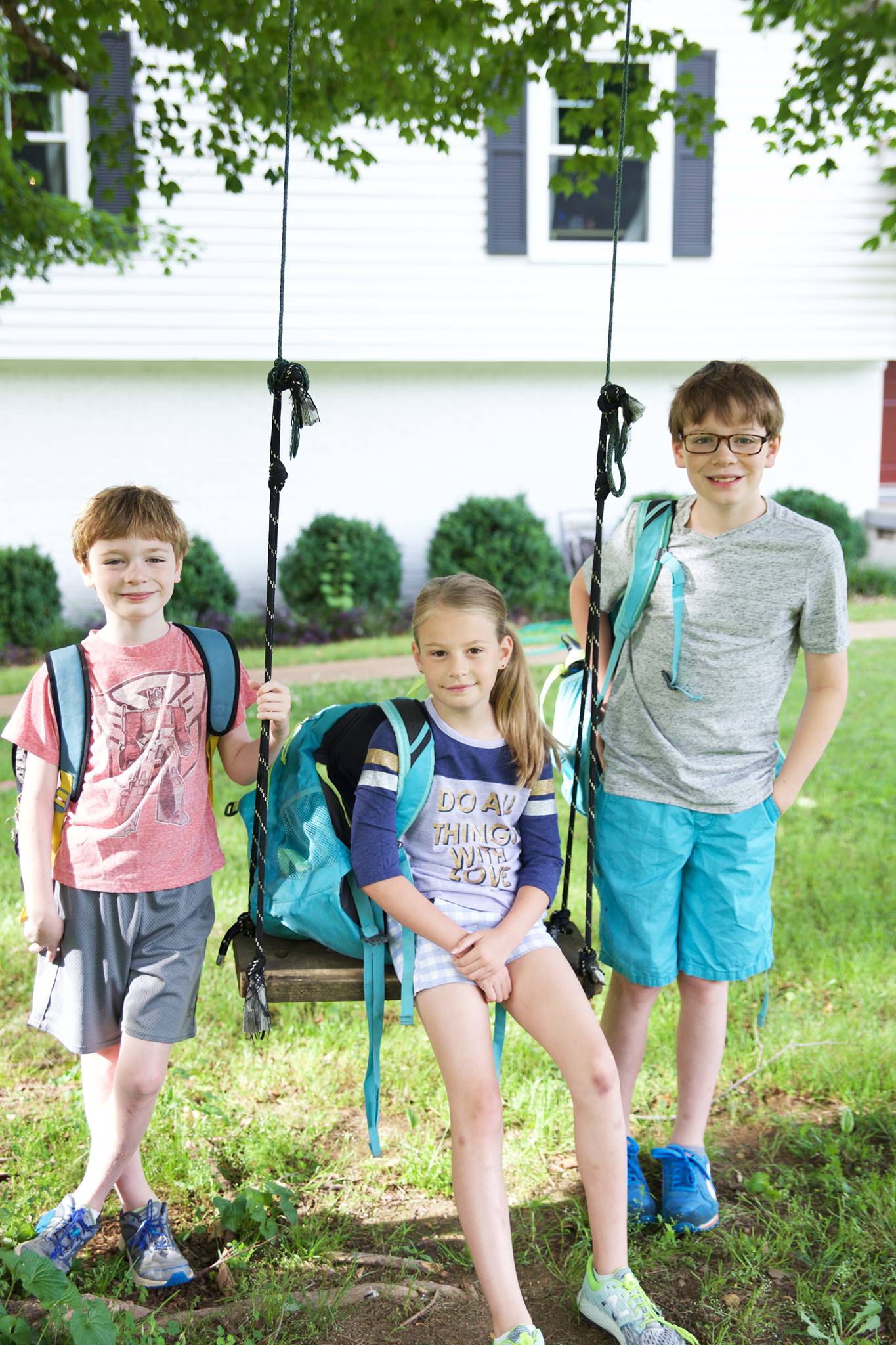 Under this tree, is where we took so many photos of so many first days of school. 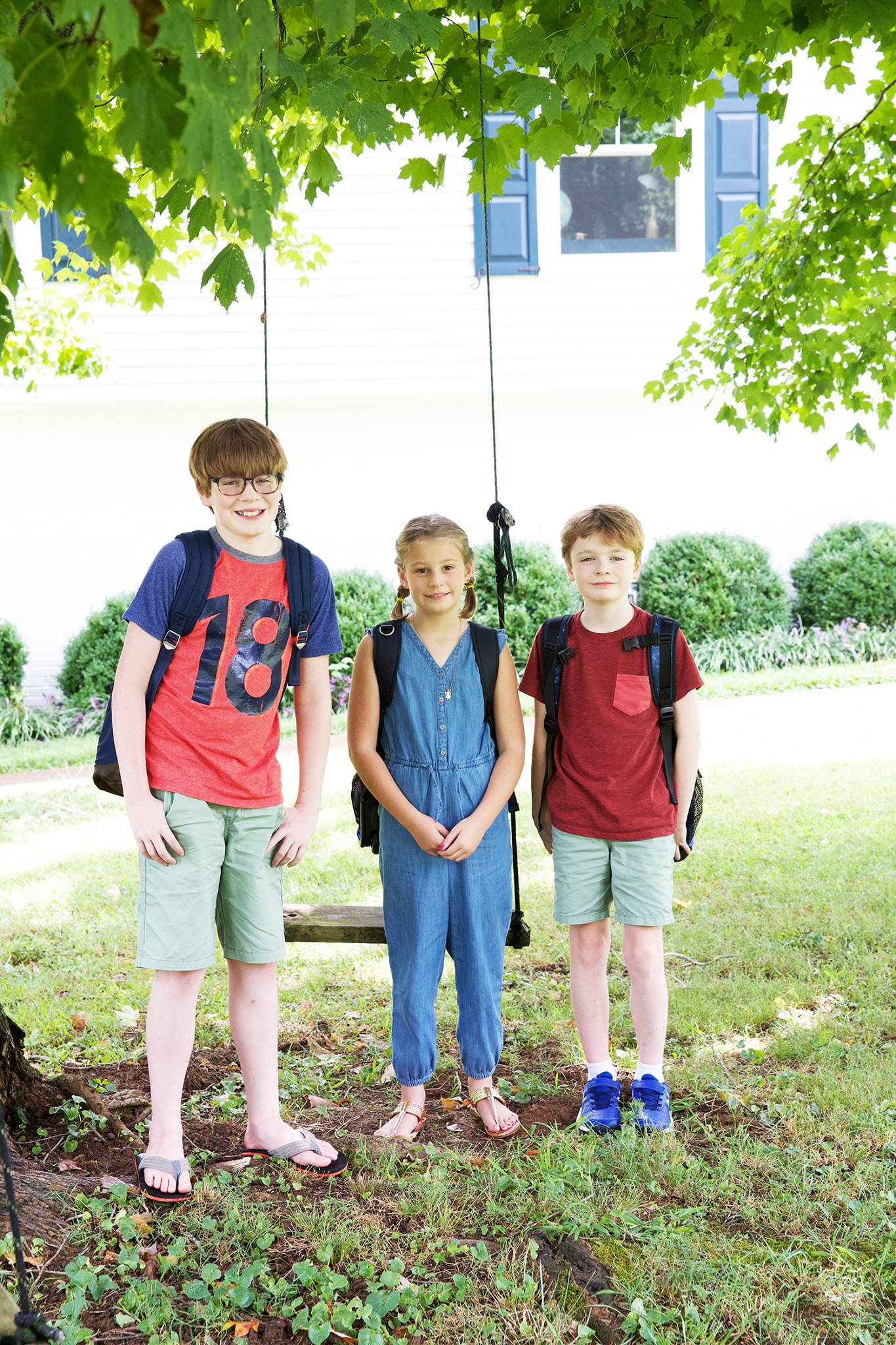 And so many last days, too. 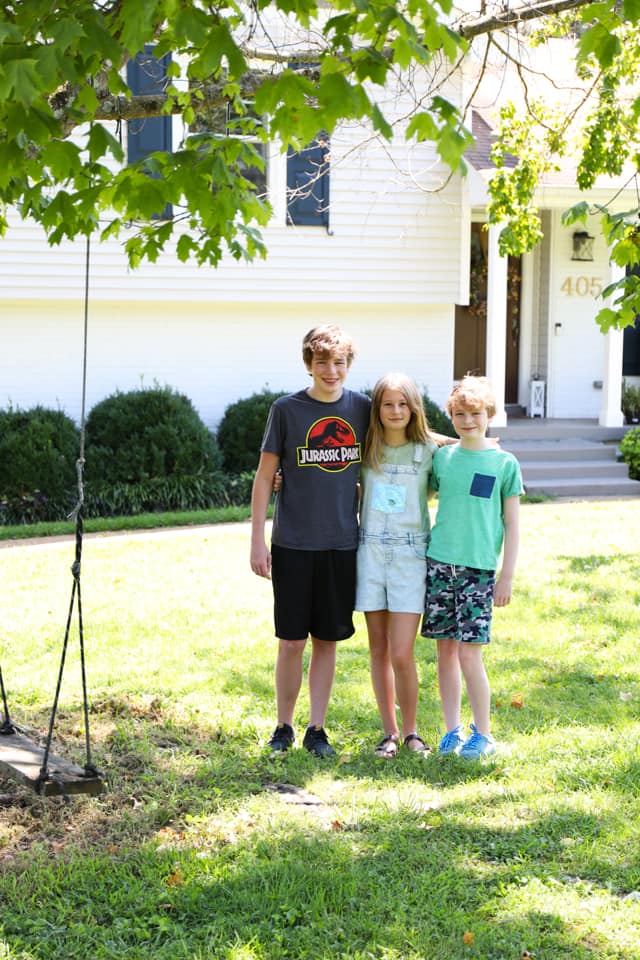 Under this tree, is where they posed on our first real live snow day.

I think this southern-born Alabama girl was happier about it than they were. 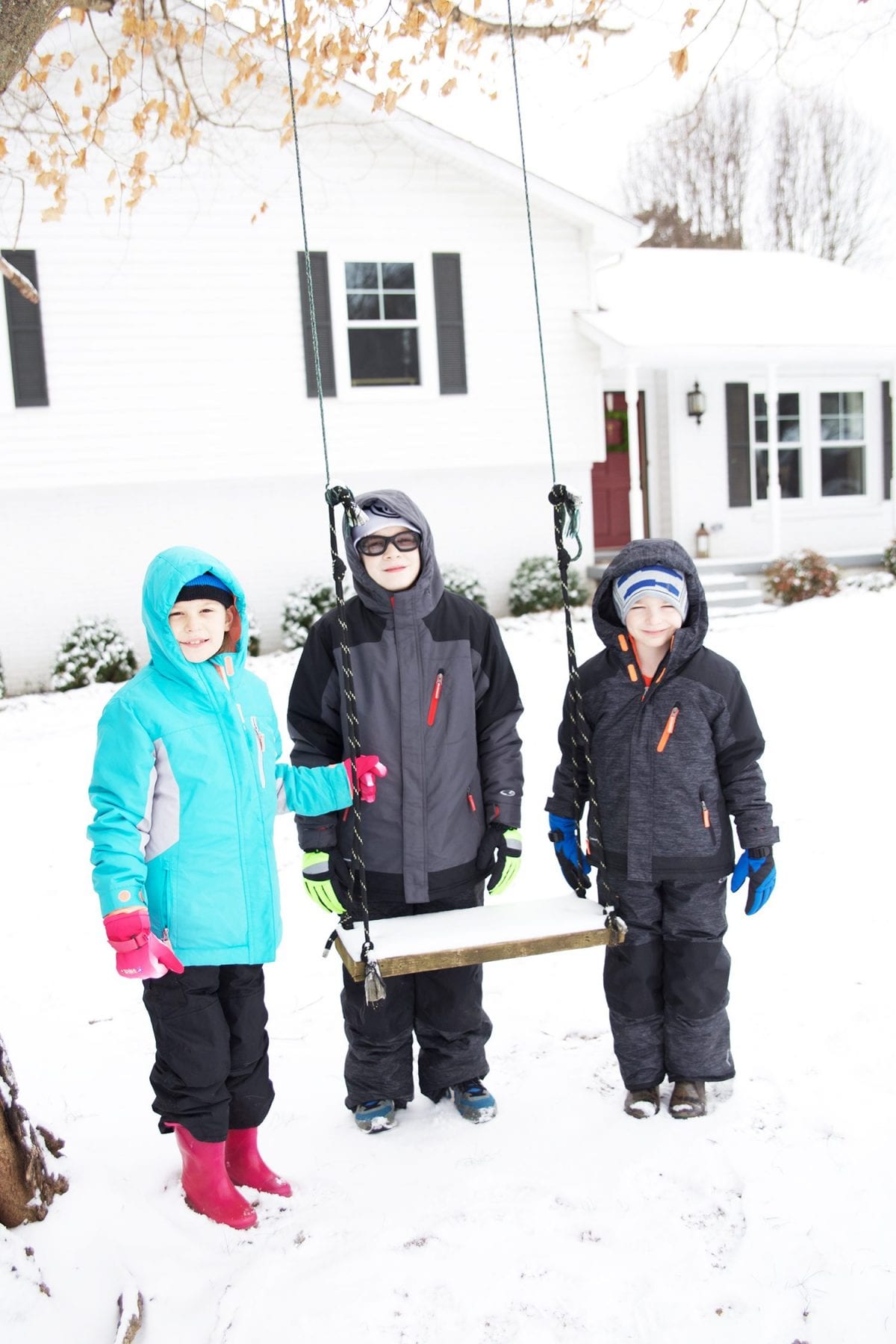 Under this tree, we had a few bike riding lessons and lemonade stands beneath its cool branches.

We caught fireflies in the evenings and shot fireworks in July.

We sat on the front porch and made memories and laughter in sweet, fleeting moments with family and friends. 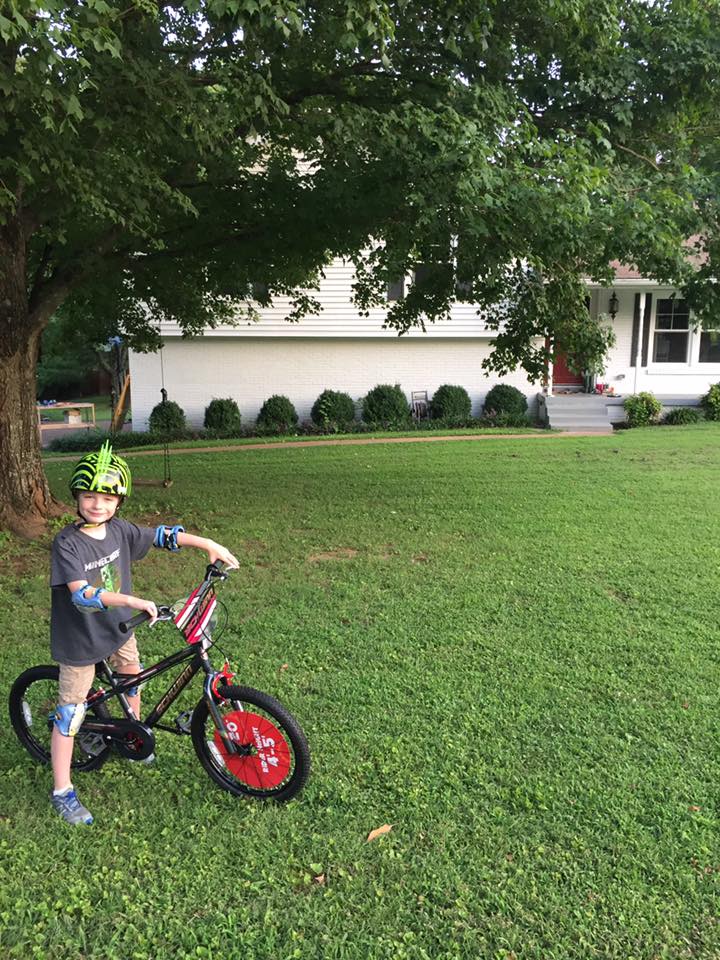 And then we learned the tree was sick.

We worked so hard to save it.

We called in an arborist and took drastic measures. We received mixed advice and multiple opinions. But it was a game of wait and see. And unfortunately, it was too far gone by the time we had a definite answer. 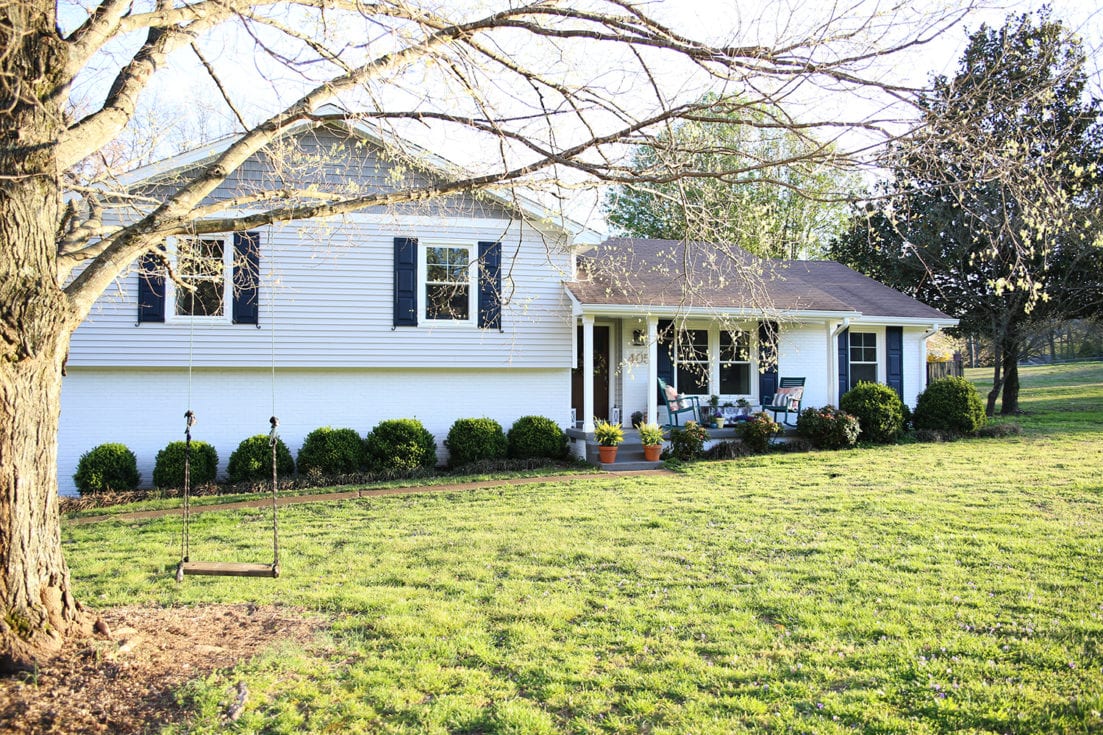 To say there was a bit of a mourning process that we went through with losing it, would be an understatement. 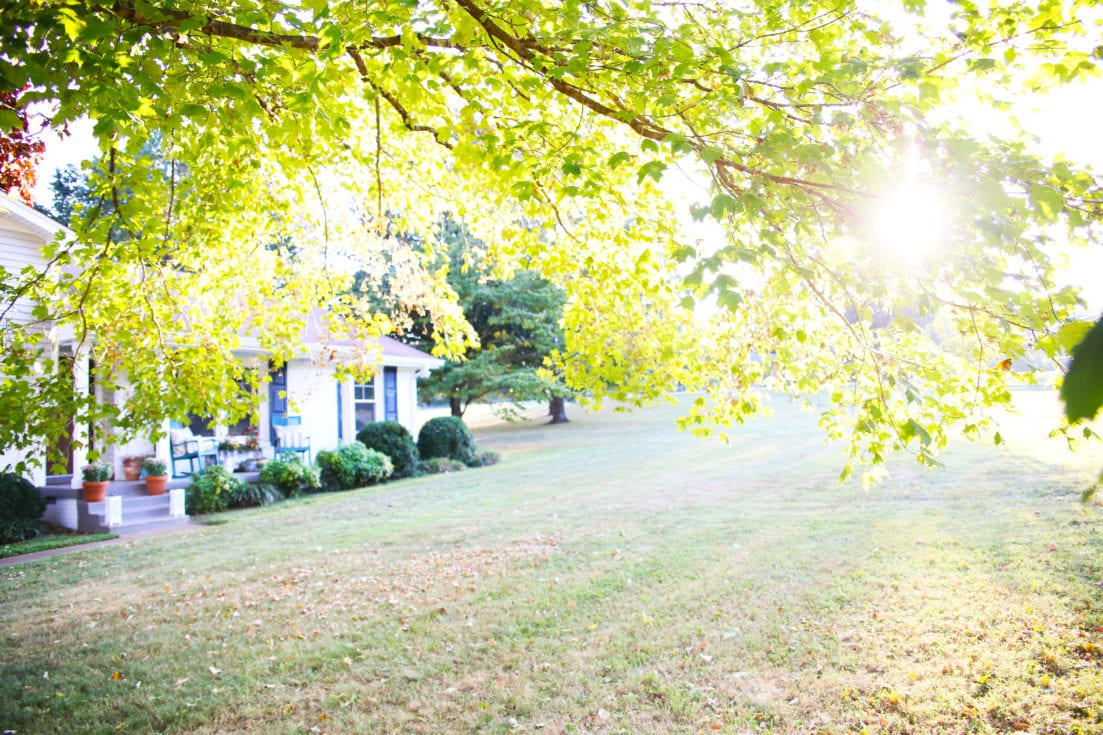 We really loved that tree. 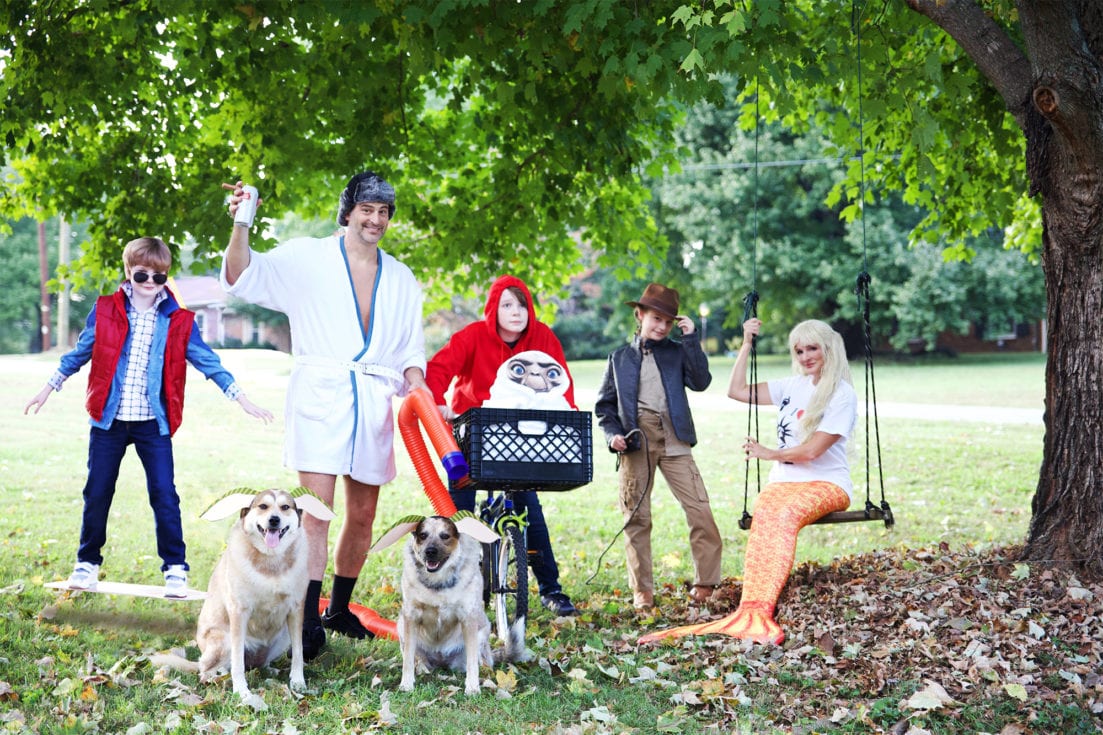 When our tree didn’t come back last spring, we knew we’d have to cut it down, but we waited. And waited. Branches started to fall. I think I was in denial, believing it could come back, and didn’t want to do anything too soon. But it became a bit of a safety issue. Jamin even mentioned removing it himself. To which I objected because of the time and energy something like this takes.

So we had one final snow a few days ago, and I went outside to take a photo.

Little did we know it would be the last. 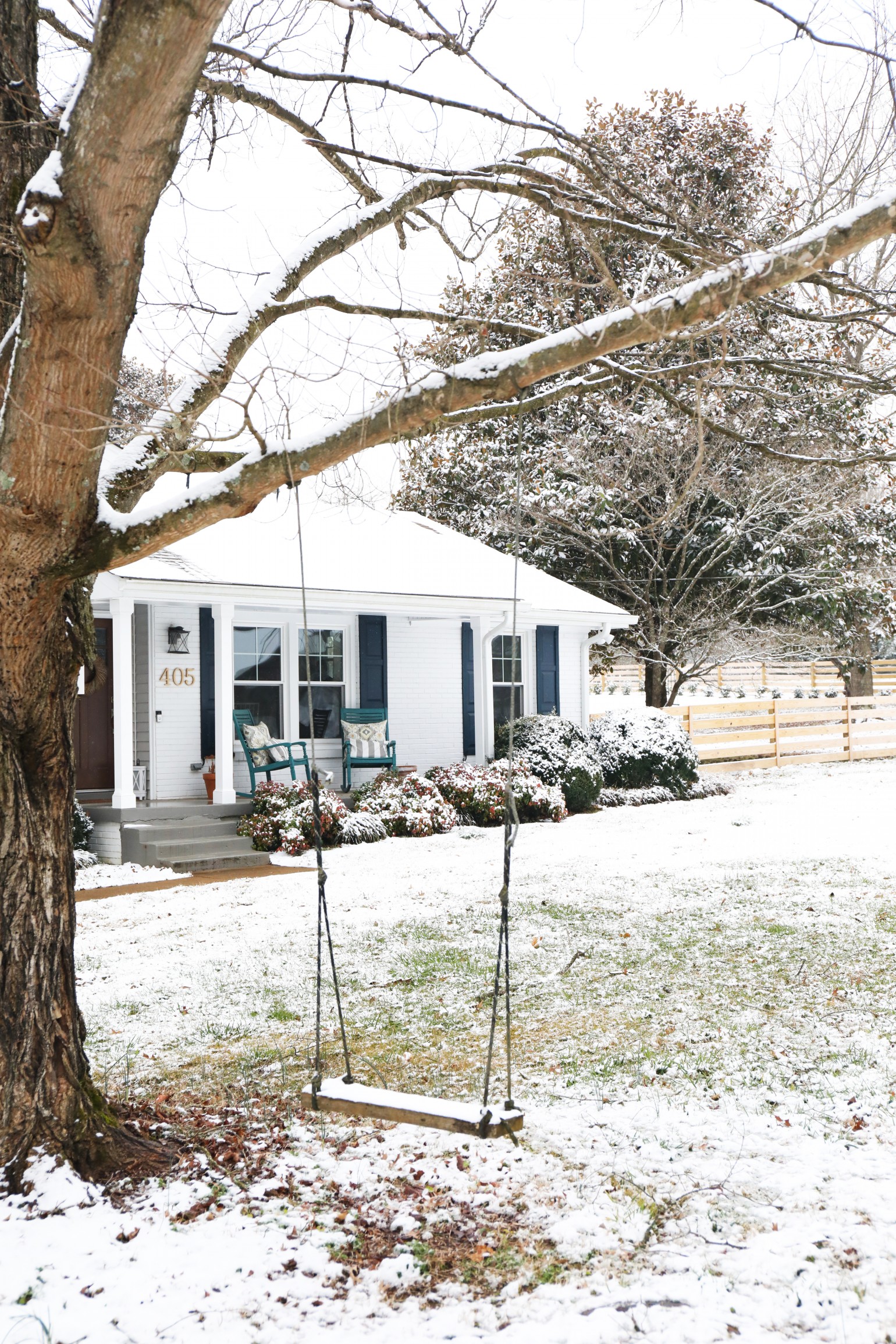 Then yesterday, when we woke up, a team of people were cutting down a dead tree in our neighbor’s yard across the street. We reluctantly seized the moment, and paid them to take ours down, as well.

It was so sudden, but I knew I’d never be ready.

So before school with a crew of men waiting behind us, we grabbed one last, quick photo. 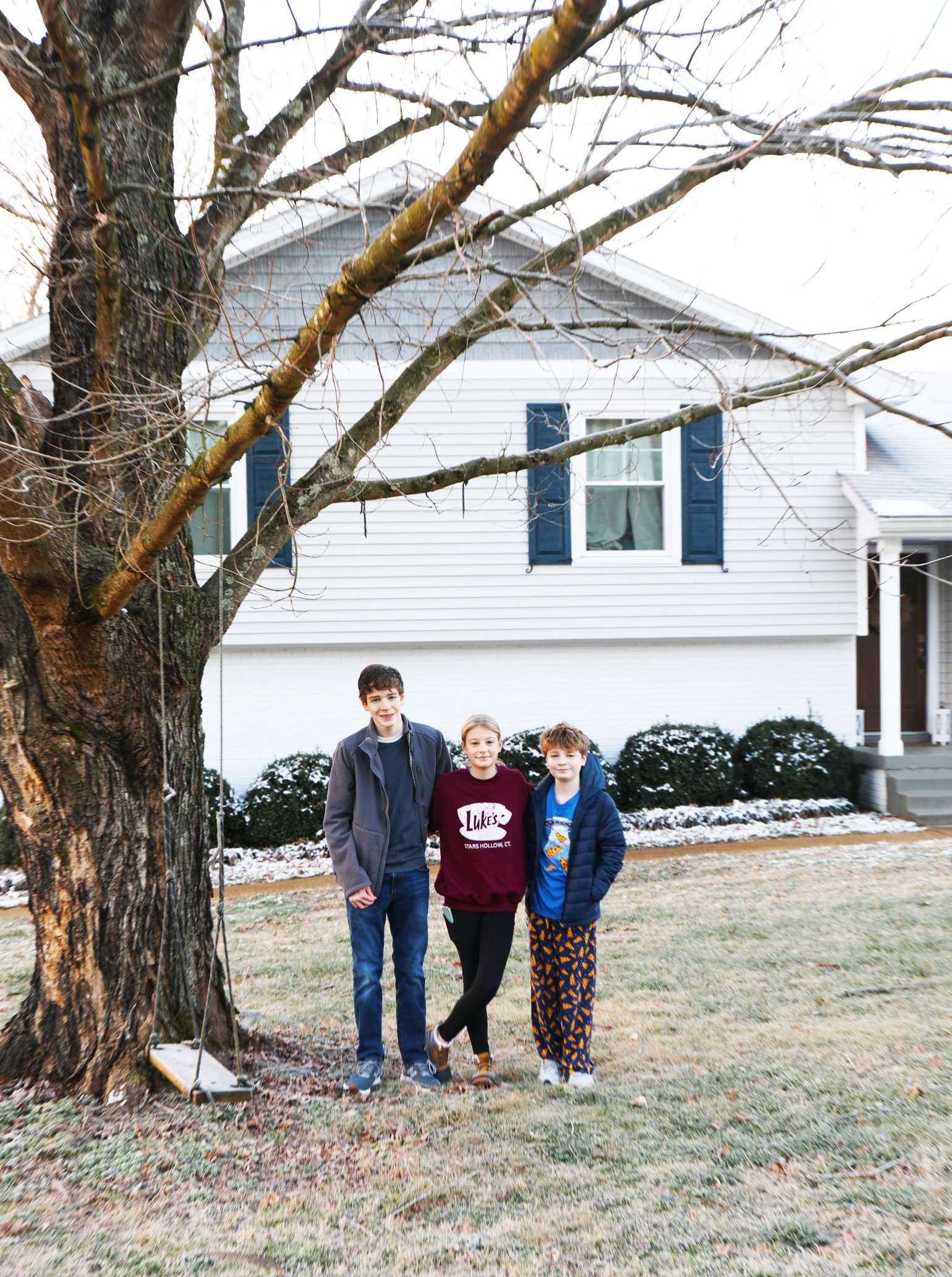 We were so sad about that tree.

But I guess it’s never really about the tree.

Or the baby clothes they’ll never wear again.
Or a new school year.
Or that collection of old drawings.
Or a sentimental Christmas ornament you stumble across each year, made carefully by little hands.

I woke up in the middle of the night this fall, with this realization: We’ve been here four years.

And then: We have four years left.

Four years until our oldest graduates.

I know when they leave, it’s not like parenting stops. But it changes. Kids grow. If you’re doing a good job, {and we know we’re imperfect in so many ways} they thrive.

It’s like teaching your own heart to survive outside your body with an underdeveloped frontal cortex, and is it just me, or is that kind of terrifying at times? Wings and prayers and good preparation with a side of occasional panicked meltdowns, with all the good stuff in between. We’ve been so busy trying to guide and parent, and sometimes we’re so in the thick of it, we forget to take a step back. 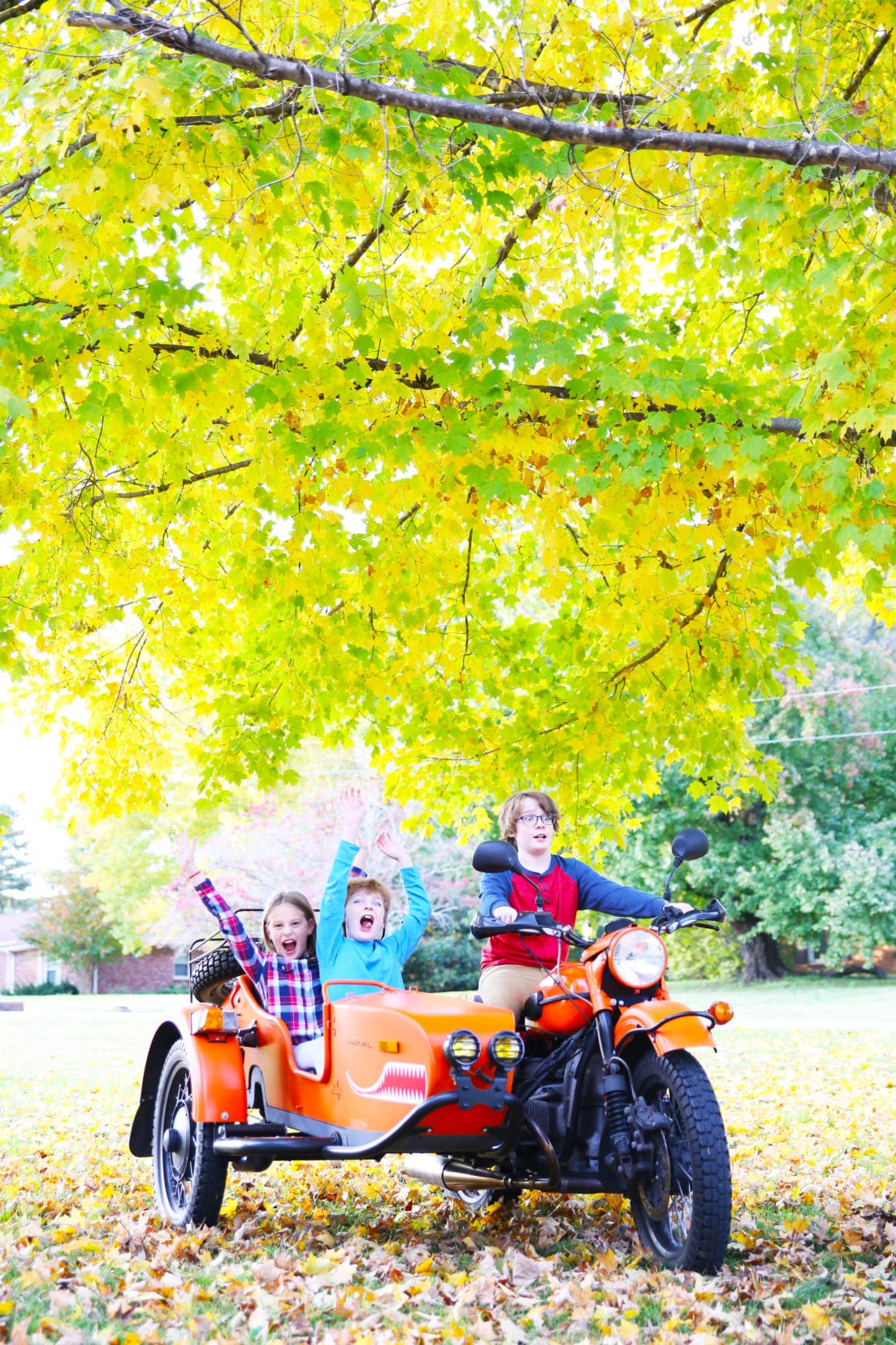 He goes to get his driver’s permit on Friday.

And the youngest just doesn’t seem to need me so much anymore.

It’s a bittersweet hurt. An ache, really. One that will put a real lump in the middle of your throat if you dwell for too long. It’s beautiful and difficult and humbling and life changing, this thing we call parenting.

I want nothing more than for Emerson to beg me to swing with her again.

Instead, she wants advice on dealing with friends. She’s taller than me and asked for mascara before school this morning.

But it only gets better. The deeper conversations and thoughts and real amazing moments we get to see, because of all the hard work we’ve put in on the front end.

I don’t want to forget to live. To embrace. To cherish. To soak it all in. Because it’s really just all too fast. 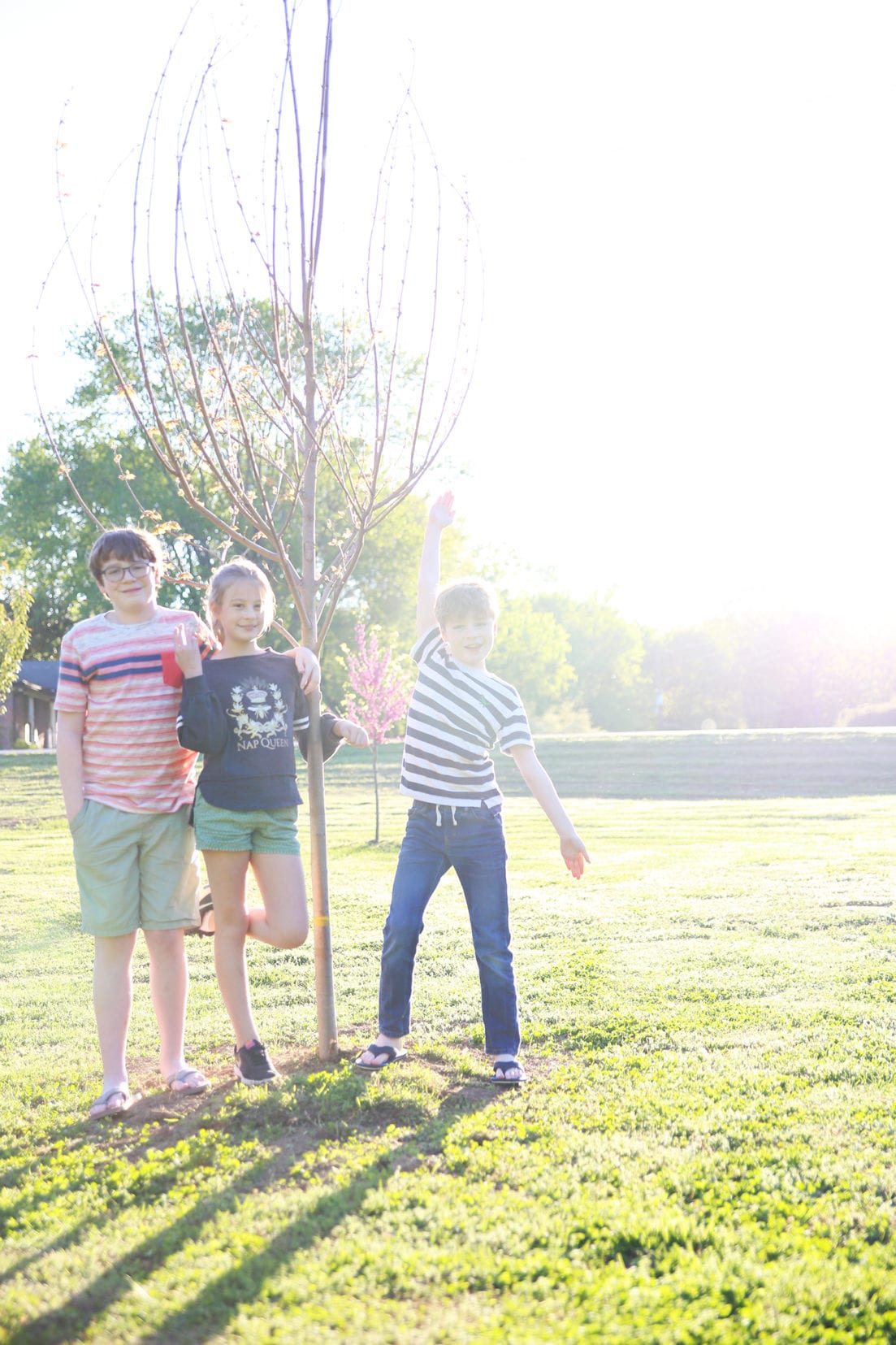 So in a way, the loss of our favorite tree, felt like a final, fitting end to a rough year.

And a reminder of the fresh beginnings in a new chapter that optimistically lies ahead.

With hope in our hearts, we’ll plant more as soon as the ground defrosts a little. It won’t be the same. But it’s something new.

I asked Jamin to grab a slice of what was left, lying on the ground. God bless my patient husband and the fact that he spent over an hour procuring it for this stupidly sentimental enneagram 4. He had a numb back and aching hands when he was finished, to show for it. It’s such a beautiful shape. I love the idea of holding on to a little bit of a souvenir from the past four years. 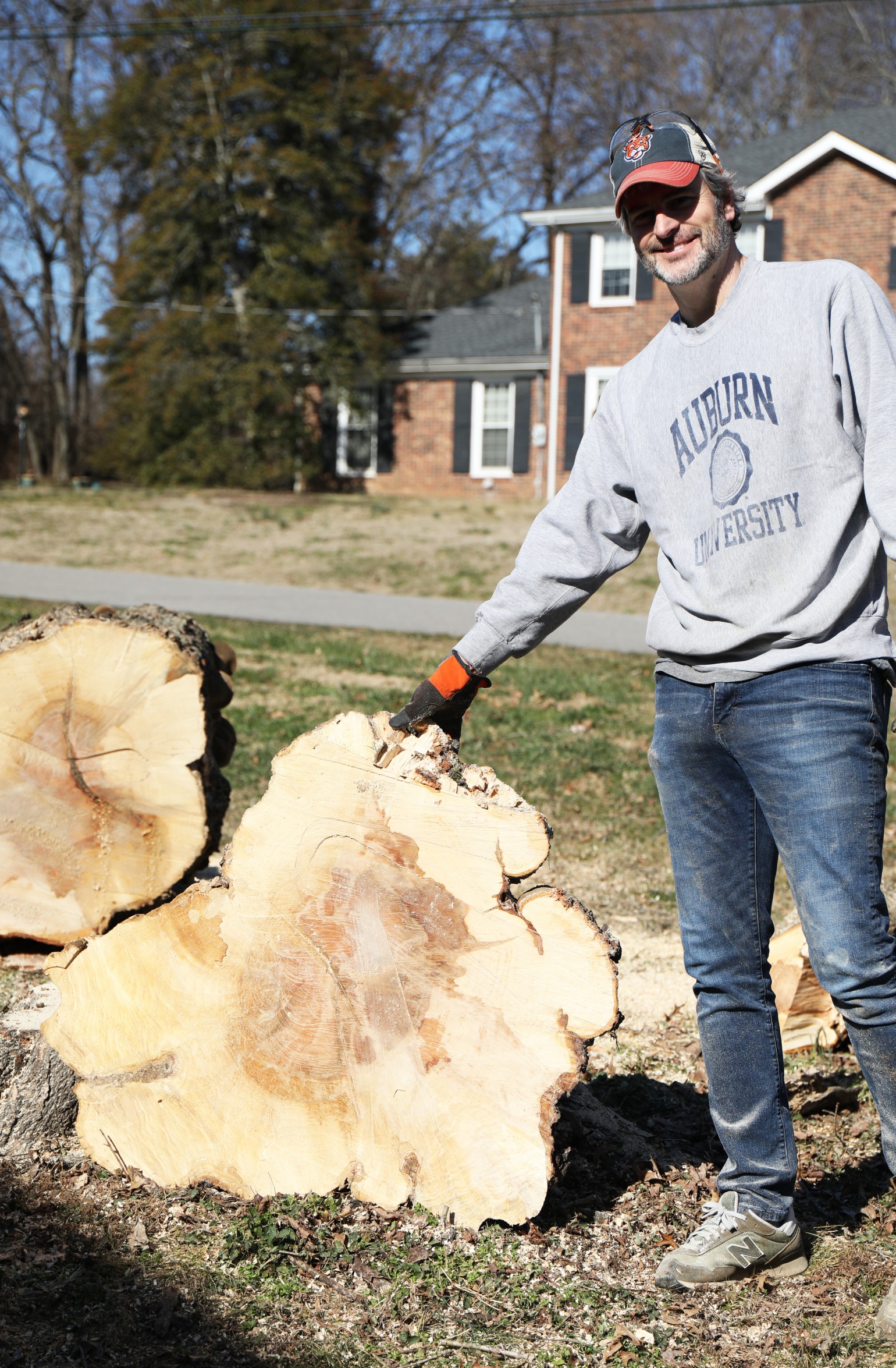 This is about so much more than a tree.

It’s about the passing of time.

Of taking a moment to appreciate what has been and what is to come.

Just relishing in those little moments.

And hopes for the sweeter moments with new sprigs of life, in the future. 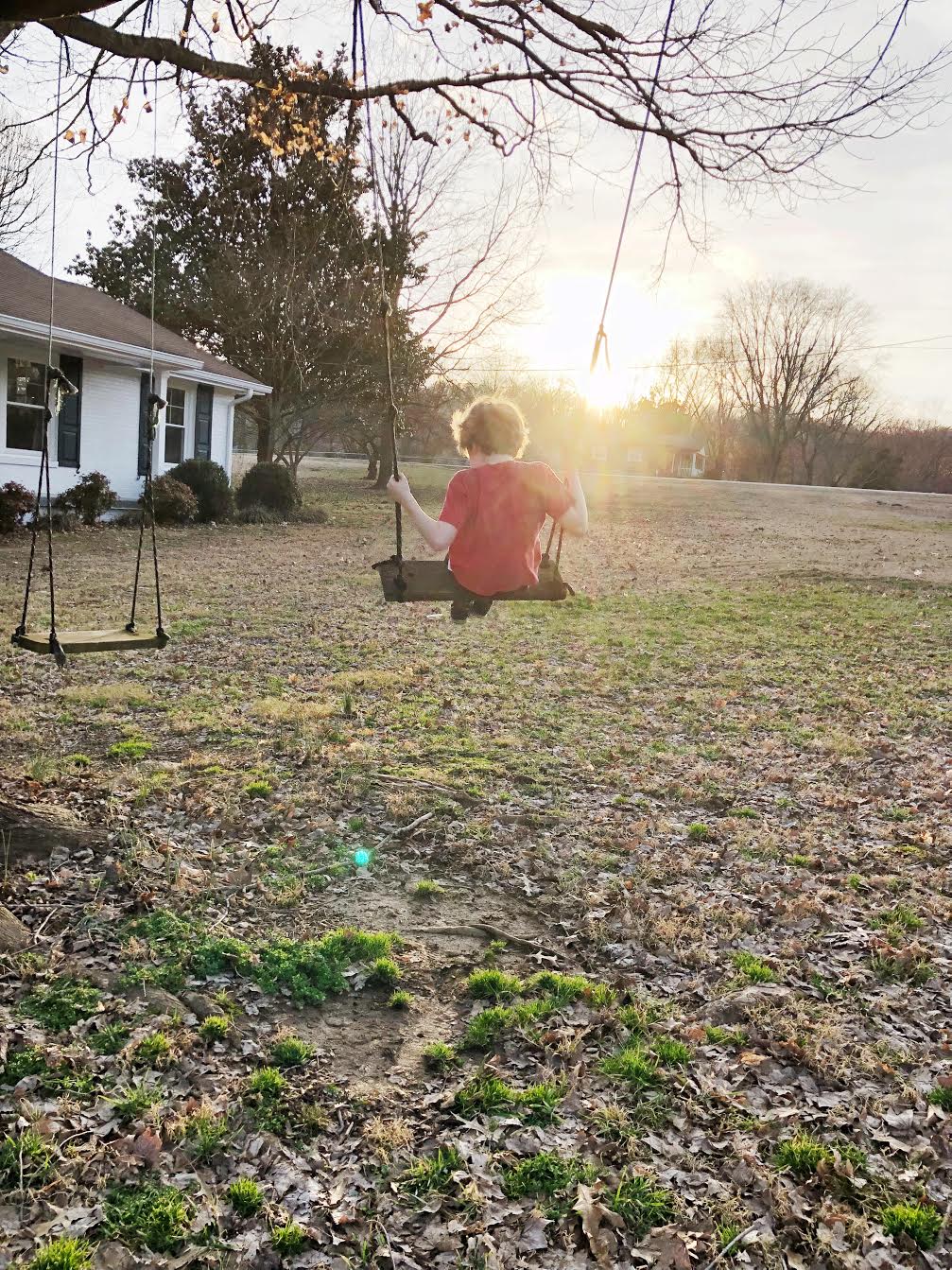 And the next time I see a tree with an old swing hanging from it, I just may have to sit down for a moment, and swing.

This, is the story of a tree.