You are here: Home / confessions / Tuttle: an impromptu lesson in death.

Last Thursday I had quite the conundrum on my hands.

I’d come home from a play date after a day of fun to put 3 exhausted children to bed for their naps. It was already 2:30. I was 2 down, one to go, and Aiden was with me while I waited, as we routinely do, for Malone to drift into oblivion before I added him (Aiden) to the mix for ample napping in the man-cave. Otherwise they’re all, “let’s stay up and play and throw poo at each other!” like little orangutans on display at the central park zoo.

I walked into the playroom to feed the turtles, and noticed Emerson’s didn’t look so spiffy. I’d noted the night before that he’d looked a bit sluggish, and he was usually quite skiddish in the tank. But I figured that he was sunning. I mean, come on. He’s a turtle. Can’t expect much. What am I supposed to do? Train them to put on their top hats and do a little jig for me for roll call purposes every time I check on them? But that particular Thursday it was bad. I mean, really bad. As in, suddenly Tuttle’s condition had gone from slightly shady behavior to I’ve-given-up-all-hope-let-me-lag-my-head-out-of-my-shell-for-added-drama…bad. 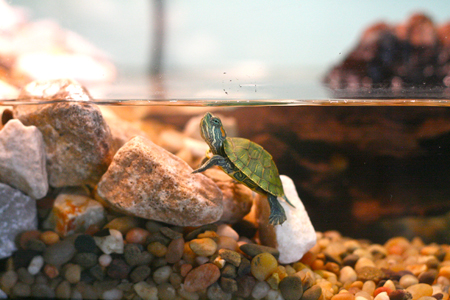 He was struggling. It was sad. And I didn’t know why. This little guy was suddenly fighting just to breathe. Each gulp of air was painfully drawn out. As if it took every single bit of energy in his body to produce oxygen. I needed to think. Aiden kept rambling about not wanting to take a nap until finally a shusshed him by calling his attention to our little patient.

“Why is he not feeling good? What’s wrong with him? Is he sick? He needs to get better! IS HE GONNA DIE? MOMMY TAKE HIM TO THE DOCTOR! WHY IS HE SICK!? WHAT does this mean in regards to my very existence here on earth and my relationship to all of mankind in direct correlation to my healthy and innermost development as a child?! FOR THE LOVE OF ALL THINGS HOLY, SAVE THE TUTTLE!!!”

Some of you may wonder, why the death question? Why is your 4 y.o. kid such a raving pessimist? SHEESH WHAT ARE YOU TEACHING HIM??? But you see, my dear tens of readers, we live by a graveyard. So nearly every single time we drive by, every funeral is noted by my children (classy digs, btw. I told Jamin he could totes bury me there) Aiden (and now Emerson) have questions. And they’re getting harder to answer.

“Is that where you go when you die? But why don’t you live there? Why don’t you need your body? Why doesn’t your body go to heaven? What is a soul? Do they bury you in the ground? Why do they put you in the ground? Why do you have to go there?” One day it even ended with an “I don’t like God. I don’t want to go to heaven” as my child had come to the (actually natural, and quite brilliant) conclusion that God is in control, God makes us die, and God causes us to go live in the ground, and therefore God=not cool.

That took more explaining. Oh. The joys. Of parenting. (I know its only just beginning.)

As I may have mentioned before, I’m a big animal person. SO after I put Aiden down for his nap, (filled with promises to do my best to make the turtle better, even though he wanted DIRECT GUARANTEES sealed with a written and notarized contract. OR ELSE I was pretty much fired as his mother for failing to make things better)

This brought no real answers. Just stupid assumptions by uneducated people. I needed a professional.

And then I called my dad. I get my animal “issues” honestly. Dad to the rescue. He dutifully dropped everything he was doing at that very moment and came to save his teary eyed, currently husbandless daughter. It was hurting me to watch him suffer. Yes, I got a little emotional. Tuttle needed to go to the vet.

My dad sat in with the kids while I loaded tuttle up and drove with the hazard lights on to the animal doc. Okay. I’m kidding. I’m not that dramatic. But I did feel a bit like the Turtle-lance on my way. Our ten dollar purchase. YEP. I was taking him to the vet. And spent 45. I figured it was worth 45 if they could make him better, right?

At this point, you’re all: “freaking psycho.” But at THIS POINT, we had already invested a good 200 dollars in our tuttle purchases for proper living spaces. I’d done my homework to give said tuttles a proper home. I’m not a deadbeat turtle owner who wishes to harvest salmonella in the plenty so my children can handle said turtles and then lick their hands clean. You can prevent situations like this by giving them a proper living space. And this particular tuttle had two more siblings residing with him in said tank. I needed to know what I was doing wrong in the event that sickness struck again…and again…and broke my poor children’s hearts. So, I was naturally, taking preventative measures.

When I arrived at the vet, they pretty much looked at me like I was crazy, and made some remark about letting it go in the pond. Really? Because that’s responsible. Let’s just put him on the edge for some predators to come scoop him up and eat him alive while I continue on in blissful oblivion. HE’S NOT MOVING. Not to mention this was Emerson’s personal “tuttle” and both children would be heartbroken. {Malone, on the other hand, would simply scoop said turtle up and place him in his mouth.} I was trying to be fair, here.

They asked me the turtle’s name.

Tuttle was diagnosed with a vitamin a deficiency, and I was handed papers on how to properly care for my pets, along with the statement that many owners are “ignorant” and therefore unwittingly cause deaths in the tuttles. Thanks. That’s heaps of help, seeing as how I ALREADY KNEW WHAT I WAS DOING. His diagnosis really made no sense, seeing as how I was giving him the proper dosages already. I get the obligatory informational paperwork, but these people really need to learn how to discern the smarties from the dummies.

They then told me they would give him an injection, but they were currently out of vitamin A. (OF COURSE, MONTGOMERY) is all I could think. “Feed him carrots” was their response. REALLY? You want me to force feed my non eating, dying turtle? I paid 45 dollars for you to tell me he has a vit. a deficiency, and you can currently do nothing for him? SWELL. STELLAR. Why don’t we go ahead and call in turtle hospice.

“Pray over him. That’s what I did for my goldfish” the vet said.

“Did your goldfish live?”

“No.” she replied with a laugh. Really? You killed your goldfish and you’re a vet? Dear incompetents: refund please. Isn’t there something wrong with that, on the basis of all things right and well in the universe? That’s a swell record you have there. MAYBE I’m NOT BRINGING MY DOG BACK HERE.

I searched high and low with my parents for vitamin A that night, with hopes that he could actually get better soon. Tuttle would have nothing to do with his carrots or cabbage. NO. ONE. HAD. ANY. VITAMIN A.

The next morning the inevitable had occured. My parents had discovered some type of spray someone recommended online, and they were heading to our house with it. But I found Tuttle that morning. He had turned belly up. My only consolation for the kids (who made me cry because they were crying) was that tuttle was no longer suffering. When we buried him that morning with my parents, Aiden asked if Tuttle had gone to heaven.

{WHICH REALLY leads to a whole different subject matter, but my child, at that moment, was looking for comfort. And while some “scholars” think otherwise, I personally believe there will be animals in heaven. Which leads to the argument that they have no soul, which my rebuttal comes with the answer of, who said God only brings SOULS into heaven? Who says God has to be bound by our limited understandings and legalistic upbringings??? Can of worms? Doesn’t have to be. JUST. SAYIN. I think my dog will be in heaven one day. And I think that’s personally okay to believe. Don’t burn me at the stake.}

Yes. I am defensive.

SO, teaching your children about death isn’t easy. It’s probably one of the hardest things I will do with them. I can’t imagine the passing of Chloe, or what some of my friends have actually had to deal with, and the passing of a loved one. In the meantime, I snapped pics in the backyard and sent them to Jamin.

It was just a turtle. But for my children, he was much more.

It was only later that I realized how truly redneck we looked, gathered around a headstone, Aiden in his underwear and Emerson in a diaper. (Malone sleeping in sheer bliss, in a dirty diaper in his crib.) My dad placed a dog toy on top, in the shape of a star to mark the grave. Jamin said it was my Mississippi roots coming out. Chloe had also, unbeknownst to me, popped a squat and left me a big juicy gift on the floor that morning.

Dead turtle. Check. Sobbing children. Check. Dog poo on carpet to be scrubbed. Check. Surely my day could only get better from here.

That afternoon, the vet called Jamin to check on Tuttle. Jamin said he died because they had no vitamin a. Our children were sad, and their manager might want to look into that. Take that, pang of guilt, incompetents.

Ten minutes later, Aiden was asking when we could get another one.

Guess he’s over it.

After 👉🏻 Before! If you tuned in last week,

According to social media, fall is here but I’m

Sneak Peek! I'm giving away this free pattern for

While we love creating spaces for our awesome clie

After 👉🏼 before My one regret? Not capturin

After 👉🏼 Before Once upon a time, this swee