You are here: Home / the money pit / sword in the stone, cops and robbers, and indiana jones

I think when we left you last with our little money pit project, we had insulation, and it was in. {Cue glorious angel choir…} It’s like that moment in the sword in the stone when we cautiously grasp the sword handle, and the lights and sparkles and voices come down. We step back, timidly because we’re afraid of what’s next. On the verge of really moving forward. Is this actually happening?!

Alas. Hark. Whilst. {And other medievalish phrases here.}

Because then that ball of momentum slowed to yet another stop.

Jamin and I have decided when all of this is said and done, our site will be a great way to remember what happened. To look back fondly. With lots of laughter and remember-whens. There are some things we won’t write about #wejustwanttofinish But for posterity’s sake, we kind of want to keep our own little list going. So we can look back one day and laugh and laugh… Because it will all be worth it. 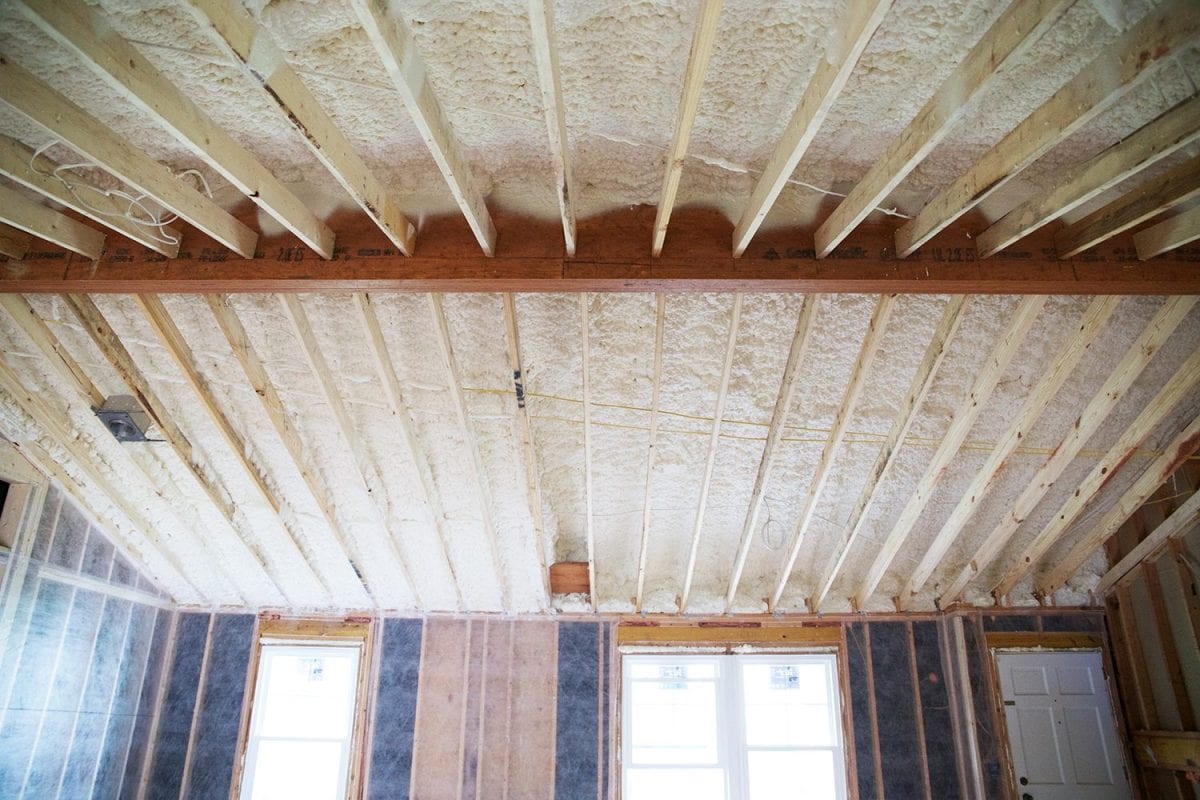 But this week, we got that ball rolling again.

A-la Indiana Jones, when he’s officially running from the giant boulder And we kind of wonder if we can keep up. Or not be crushed. And I’m sucking down some coffee tonight, just to conjure a little energy. Because we realized we were way overdue for a really fun update. My arms hurt in places I didn’t know they could. I have bruises and I have no idea where they came from. Never in my life have I been so happy to see bruises and sore arms.

I mean, at least I’m getting my workout.

If you’ve been following on the insta, then you probably know that we have drywall. Finally. 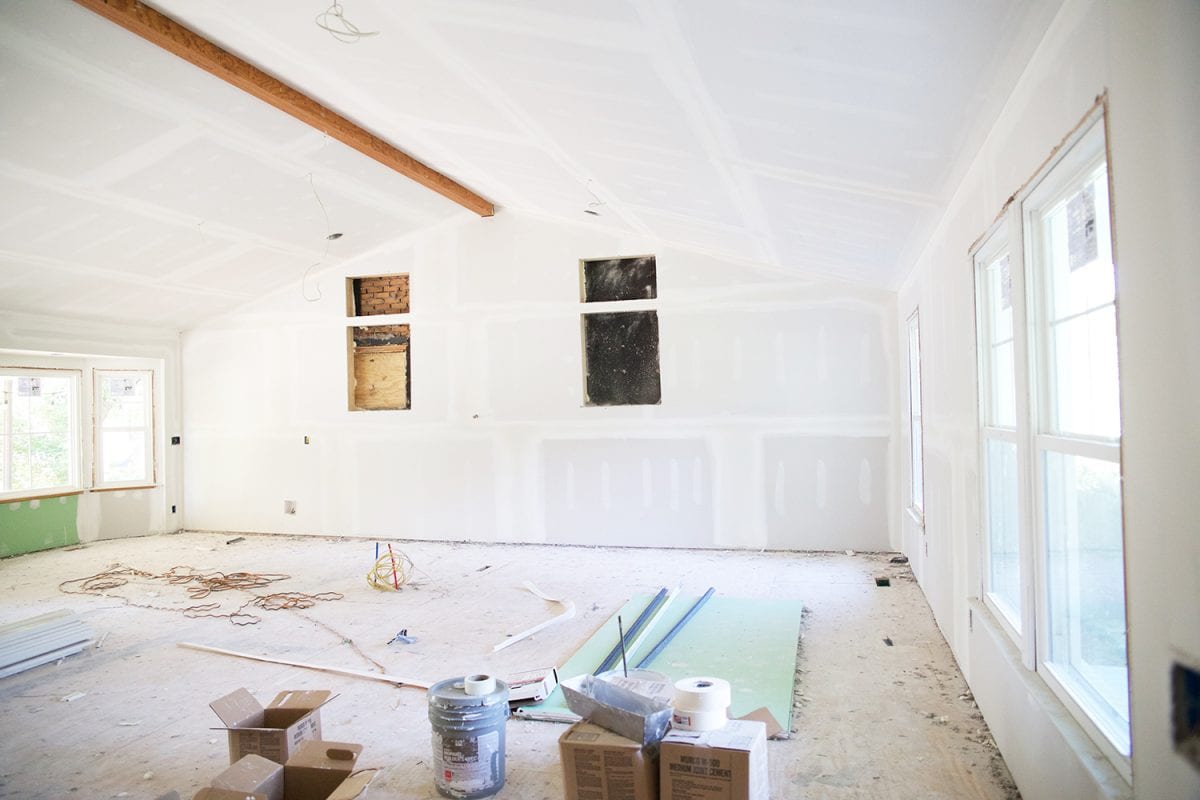 It’s been one parade of ridiculosity after the next, because after going through three crews who wanted more moolah, after an initial quote {there’s like some kind of drywall cartel/mafia/secret society illuminati in Williamson County… they’re all in cahoots-probably with septic}

And the next night, we were robbed. By someone who had our code, nonetheless. Because the door was wide open, and our key obtained with said code. Many things we were using for our renovation were taken. A lot. Three steps forward, two steps back. It’s the principle and we were livid. Murphy’s Law is basically our best friend right now.

But what started out as a big downer, was actually a little bright spot in our day. 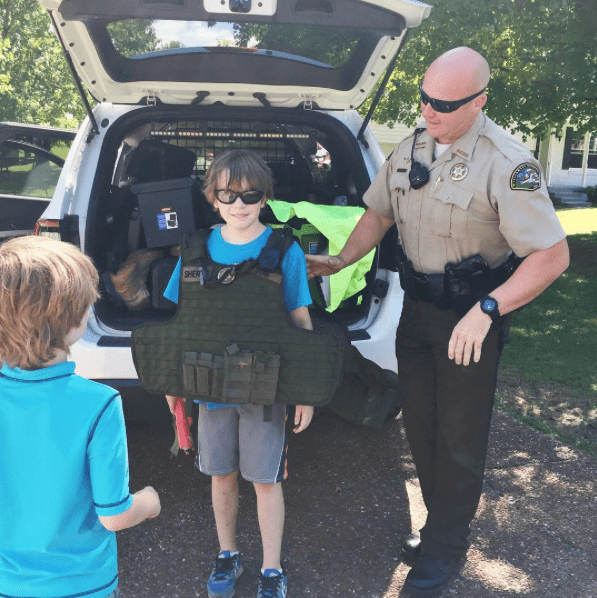 Because after filing the report and doing his thing, this sweet sherif took the time out of his busy day to assure us that Franklin is one of the very best places to live- That this was construction related. He then let the kiddos check out his car, and his awesome gear and vests and we had to step back and just appreciate the moment. It was a sobering reminder of the things we really take for granted. That it could always be worse. And we’re just grateful for the brave men and women who serve and work to protect us. It’s also refreshing to see such good people doing good things. Clearly, the world needs more of this.

And most importantly? Our children were inspired to see such an awesome person in action. Malone says he wants to be a policeman. ;} 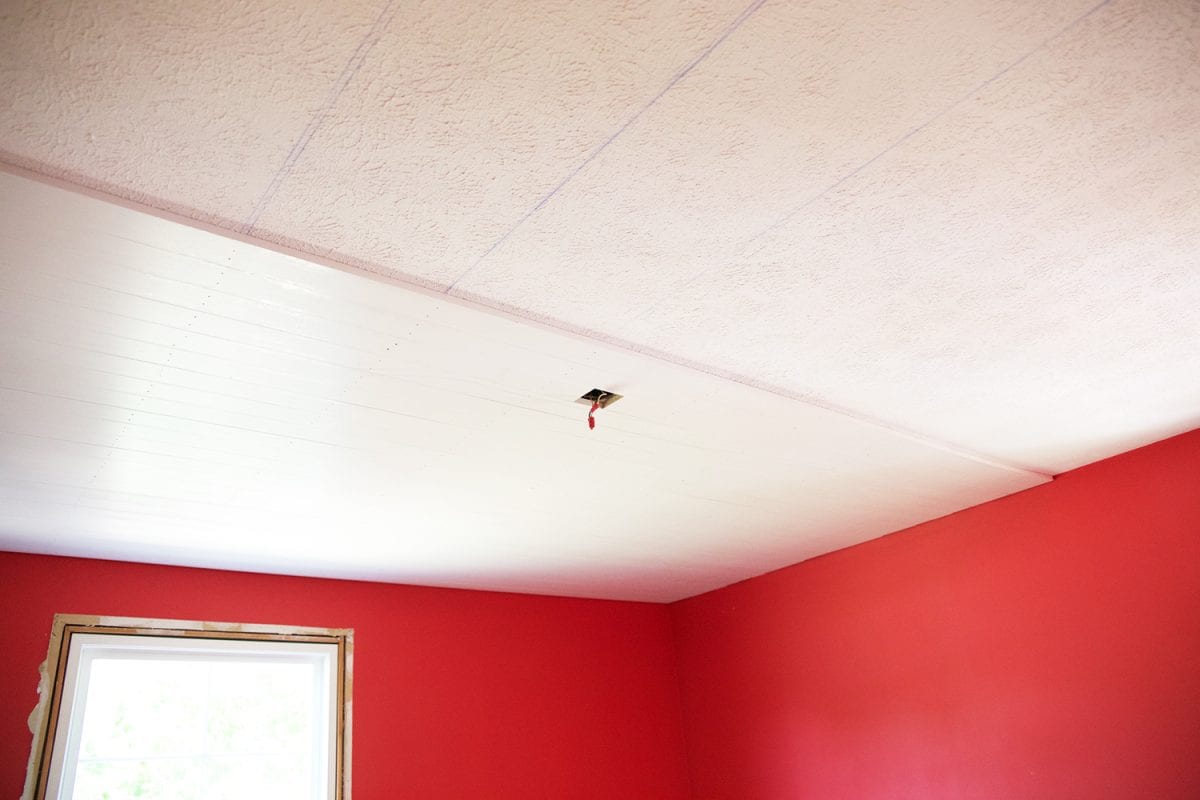 So after that, there was lots of planking. Because we weren’t going to let a bunch of dirty rotten thieves get us down.

We’re about 2.5 weeks out from cabinets, with countertops and ceiling beams on their way.

{We have more on this coming up} 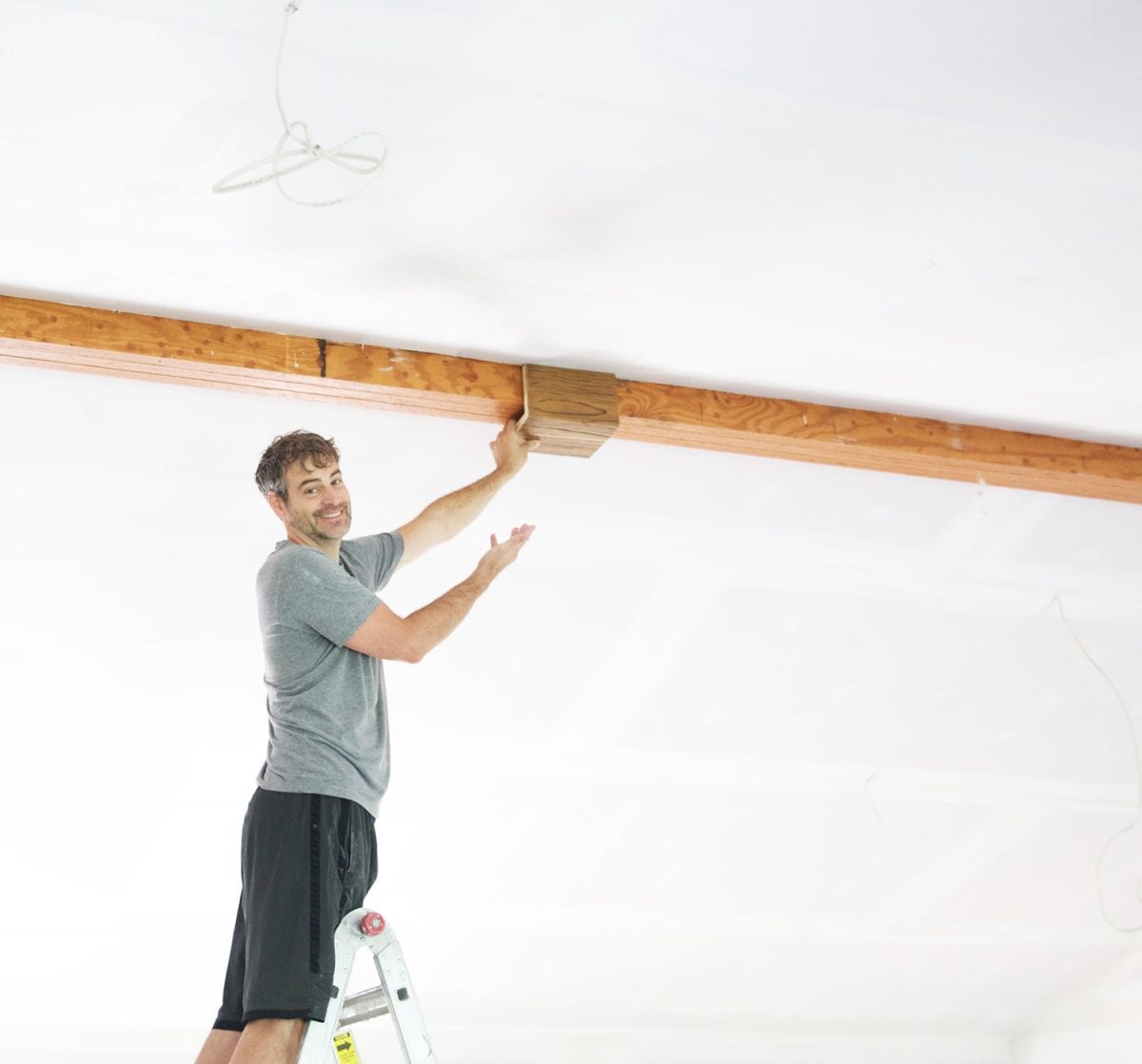 And to save about 20k, we’ve decided to take on our own ceiling adornments {a-la shiplap}, installing the hardwood floors, and painting.

All of the painting.

Yes, we’re still waiting on the septic. We wanted to play it safe with a little elbow grease of our own, since this unexpected cost could add up to about 25k extra. We’re expecting something next week. Which means five months from now. Because the basement still looks like this: 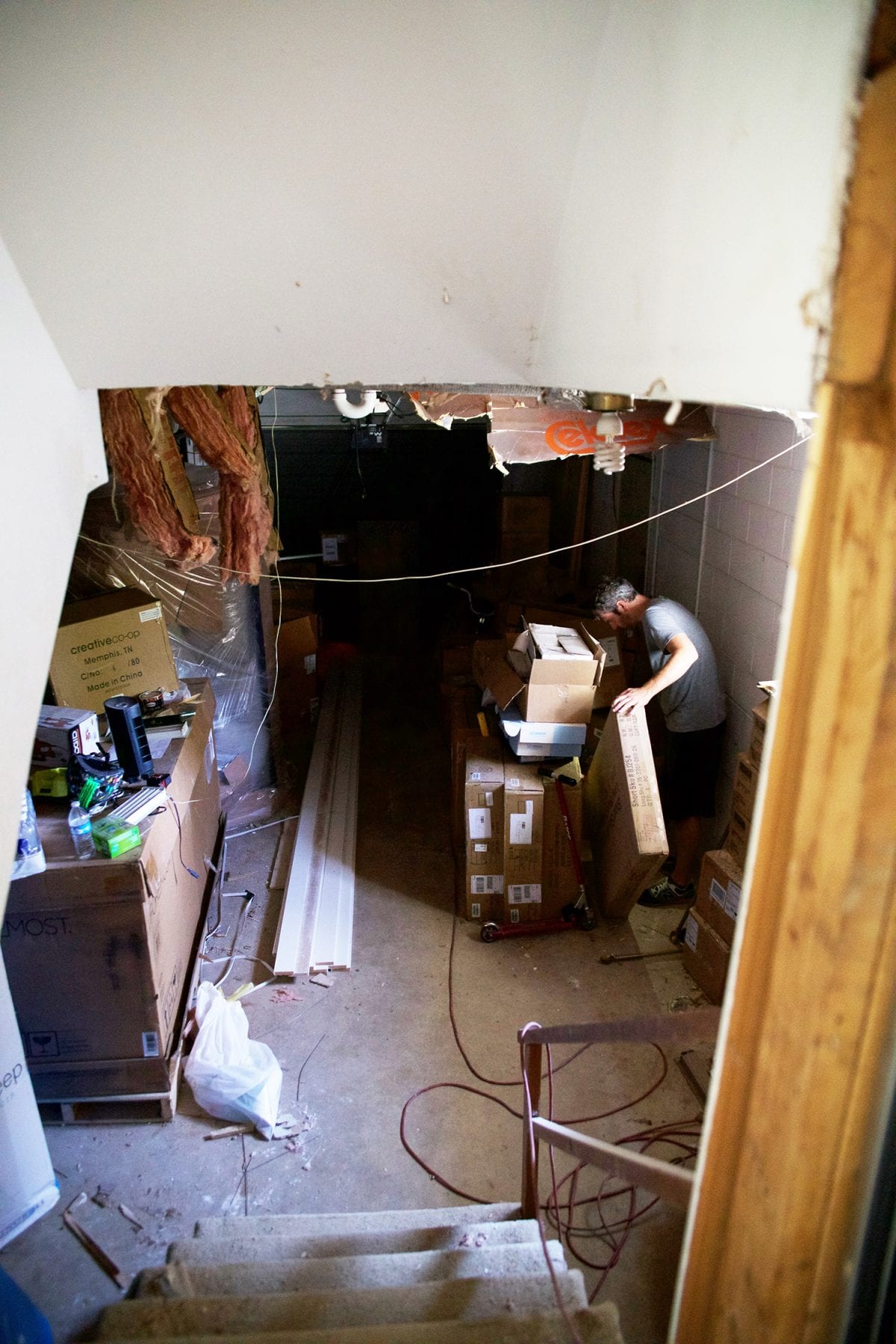 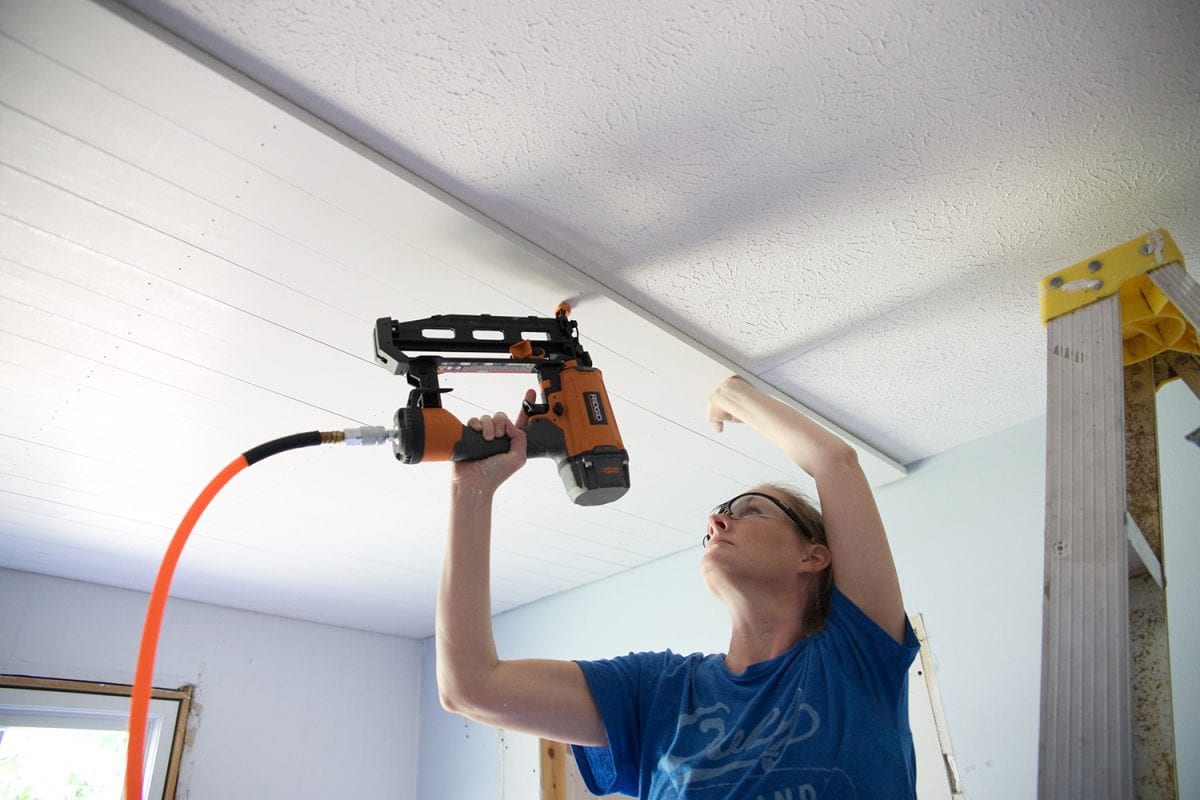 Uh, I mean that’s not on my running mix where I pretend like I’m in a movie. Shhhhh. 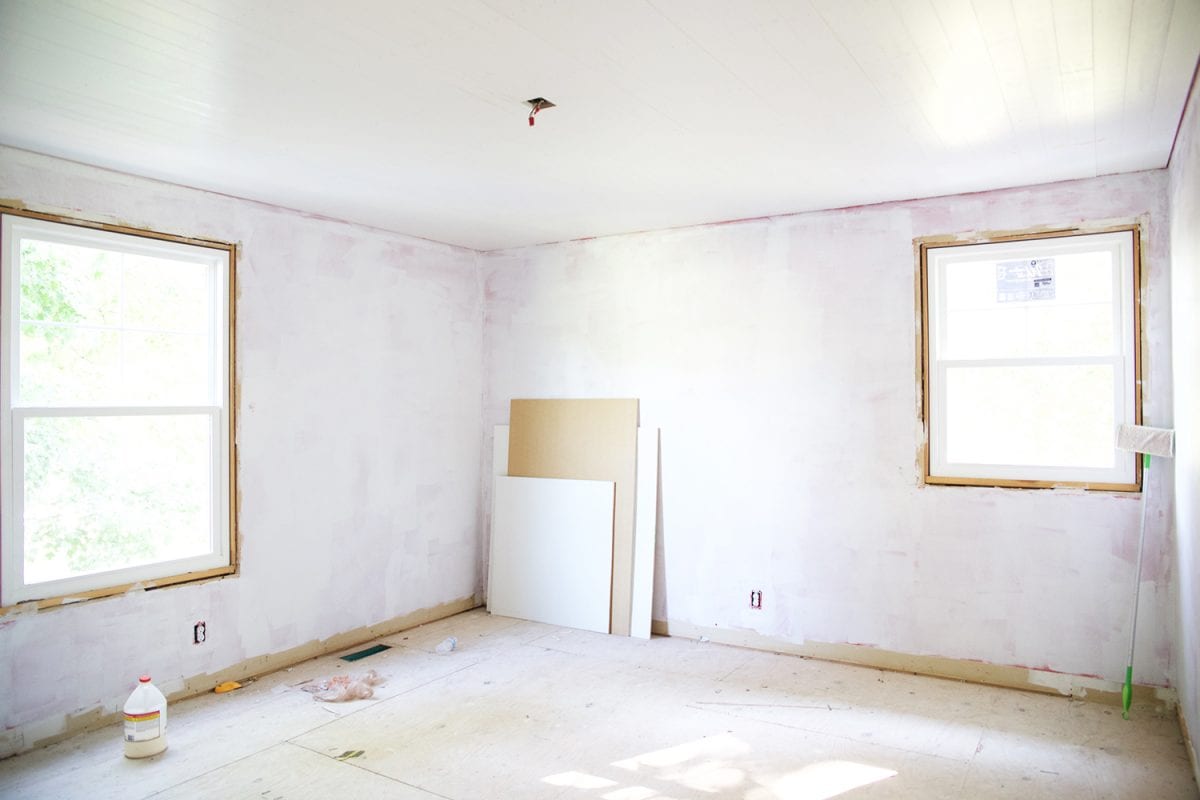 Followed by The Dixie Chick’s ‘Earl’, because that red had to die. I literally went on a rampage. It’s amazing how gratifying painting really can be. 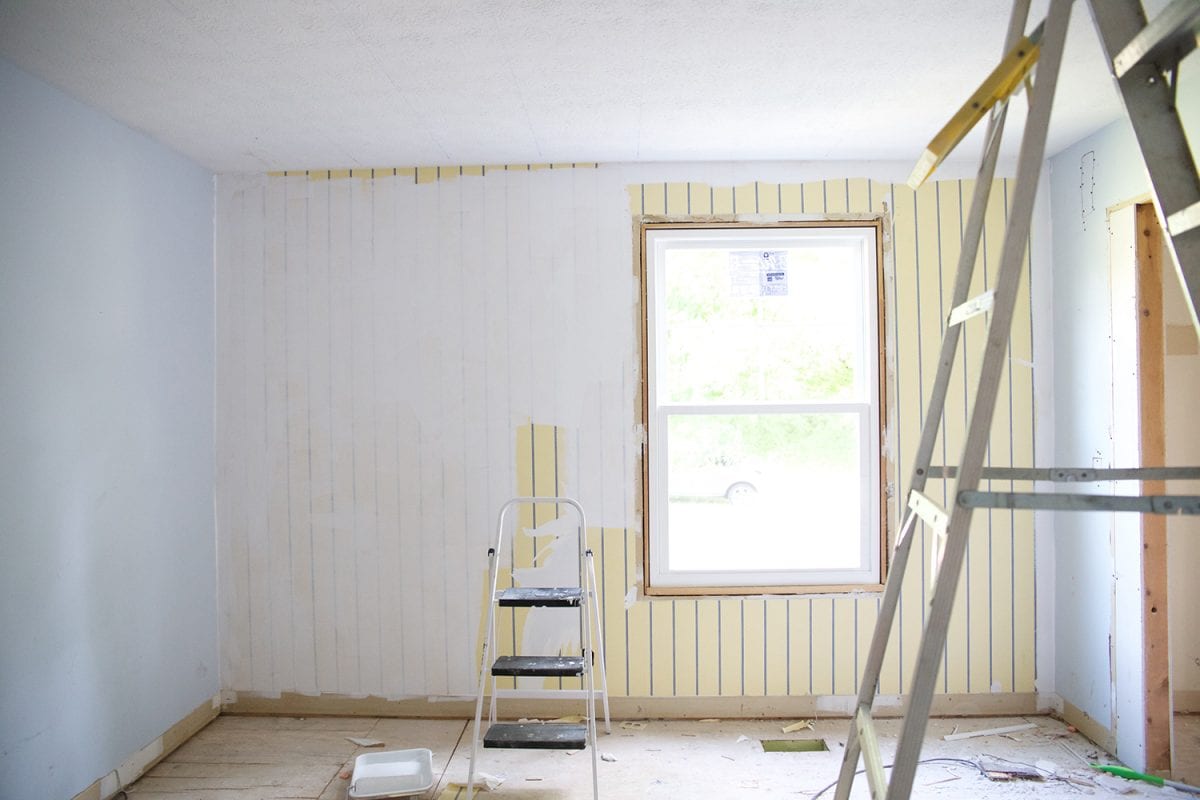 As did the wallpaper. Which we’ll have a great solution of getting rid of it, soon. 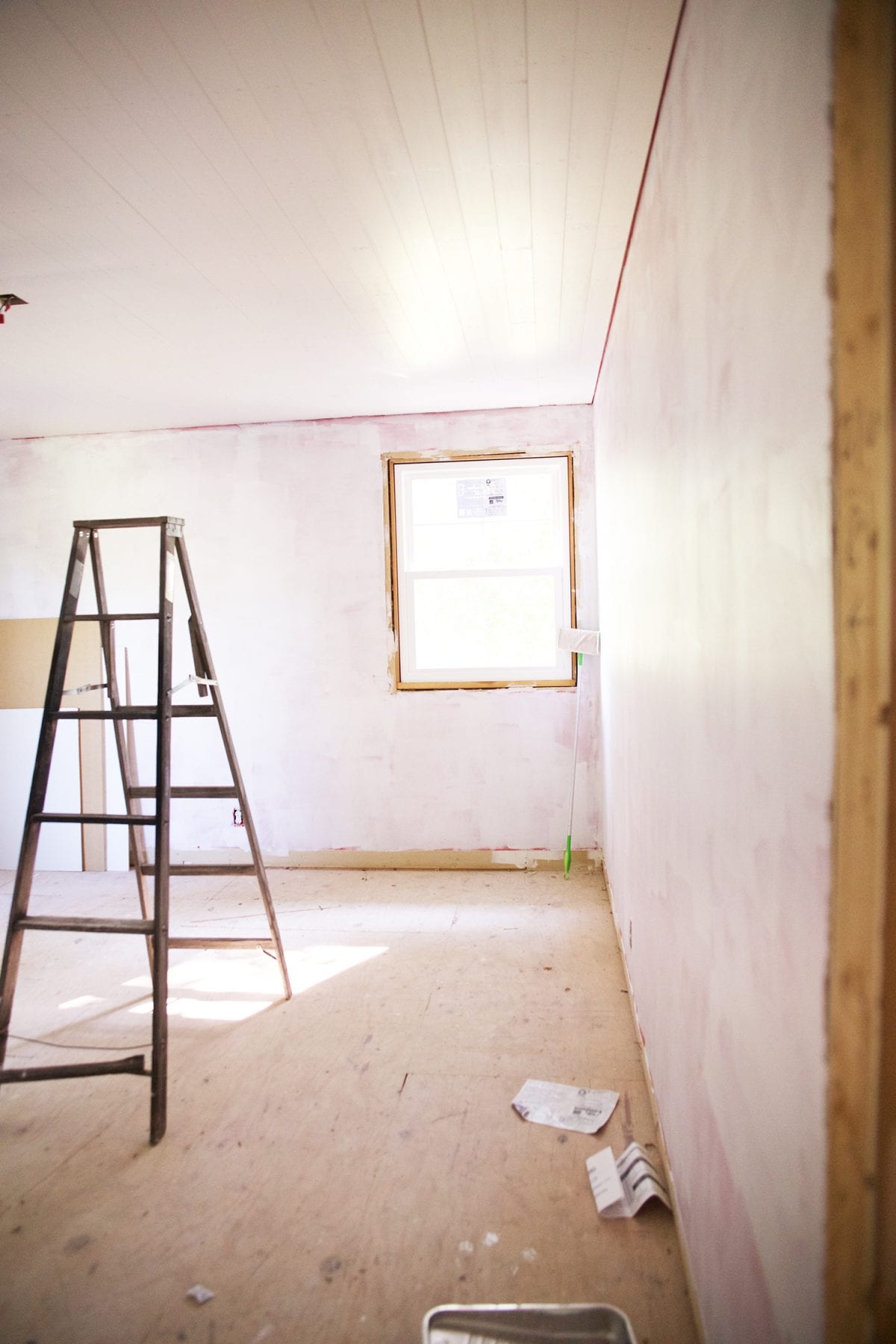 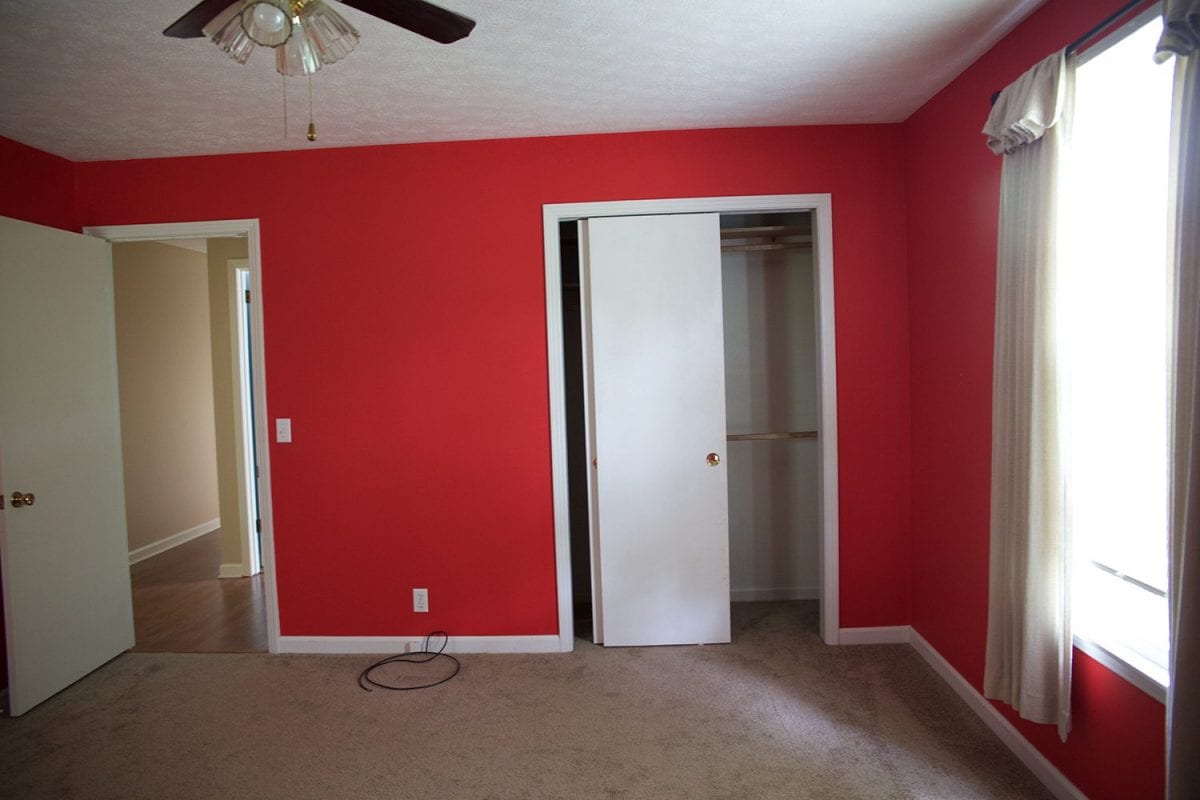 We widened these closets, and bumped out the separating wall for much more space. 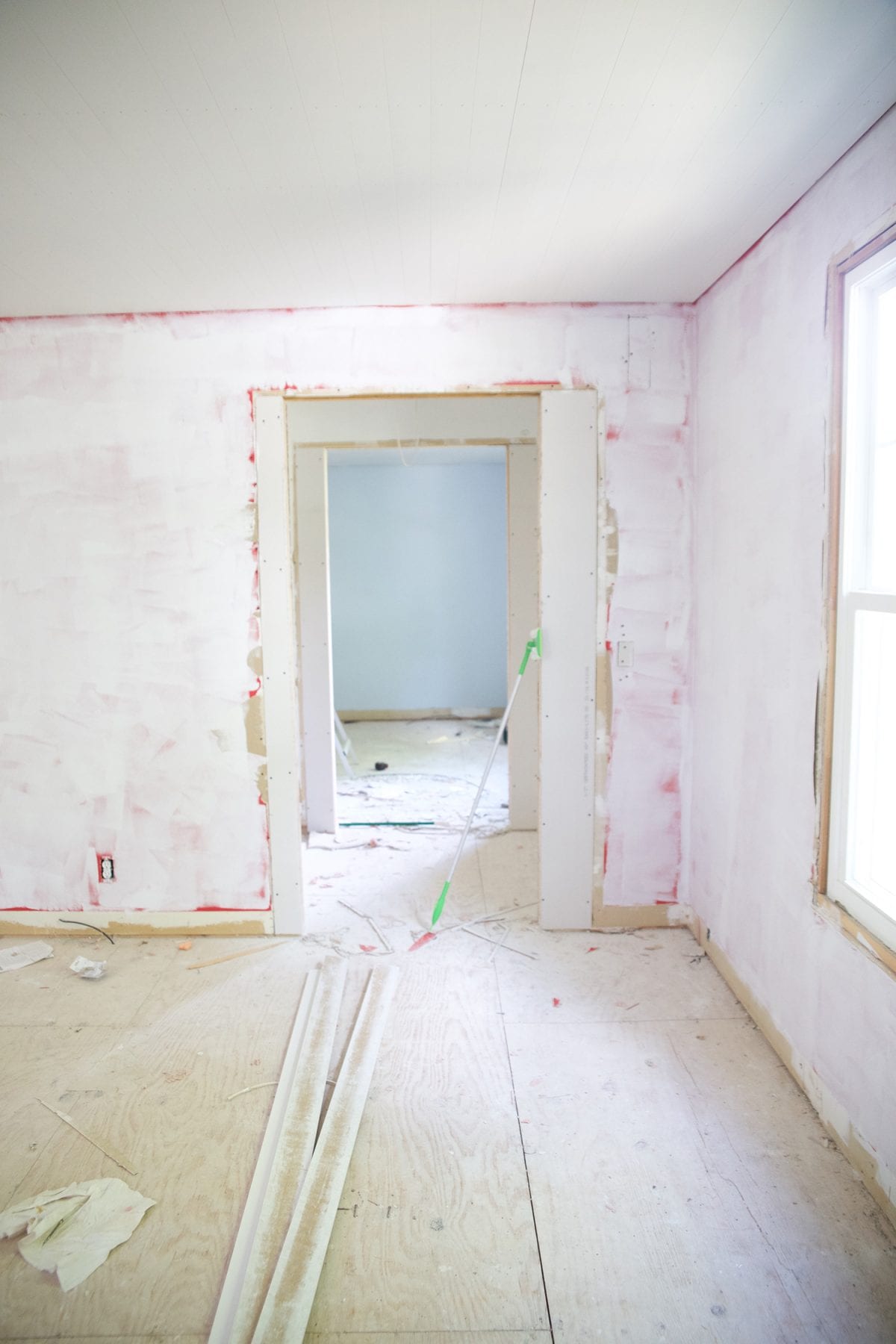 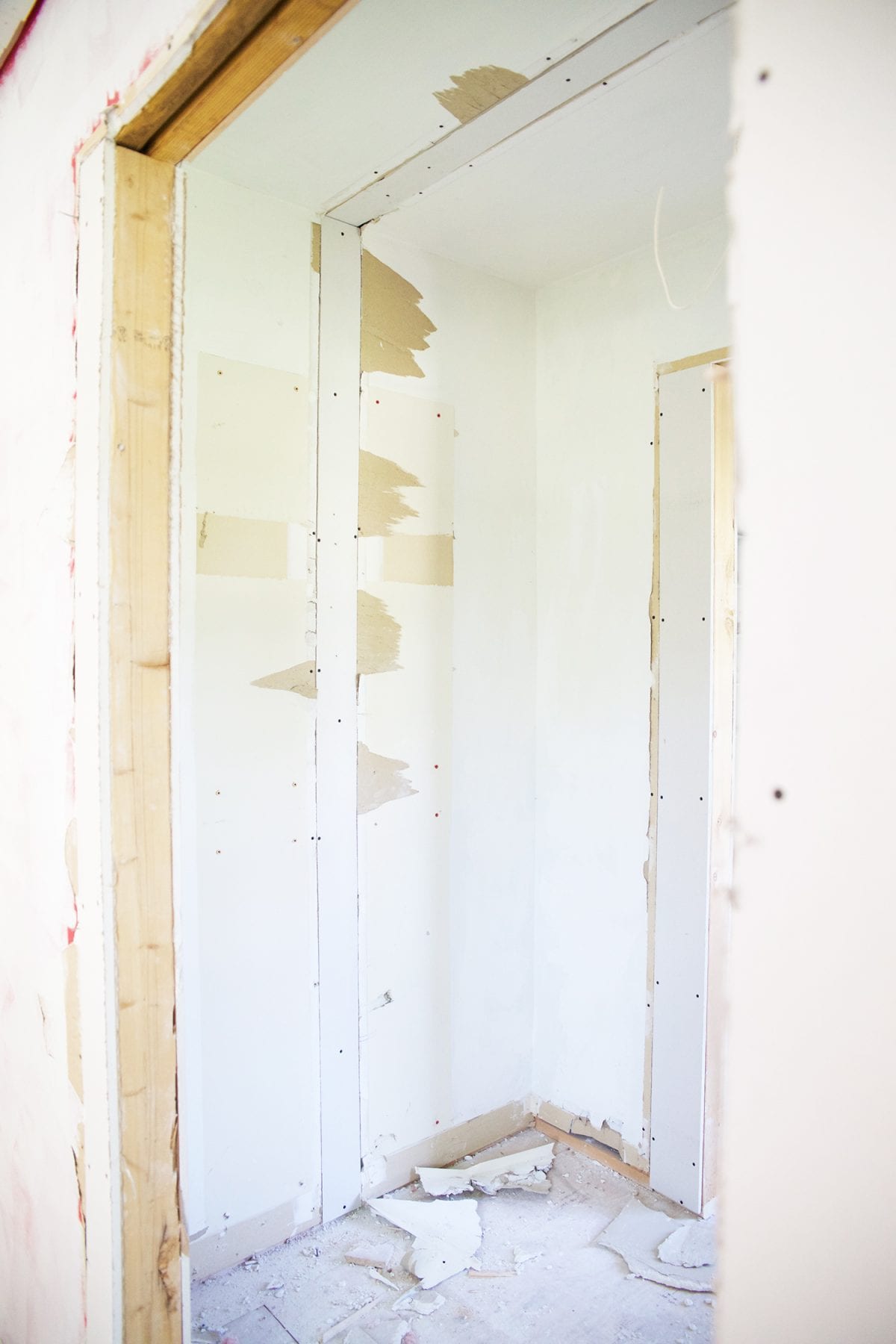 I swear, it’s one of our favorite changes we’ve made.

But in the meantime, we’re so excited to see so. Much. Progress.

It’s fun to see little tweaks and details like this, begin to come into play.

We also had a lot of fun chunking the remaining defunct ceiling fans and plastic hardware out the window. Therapy. 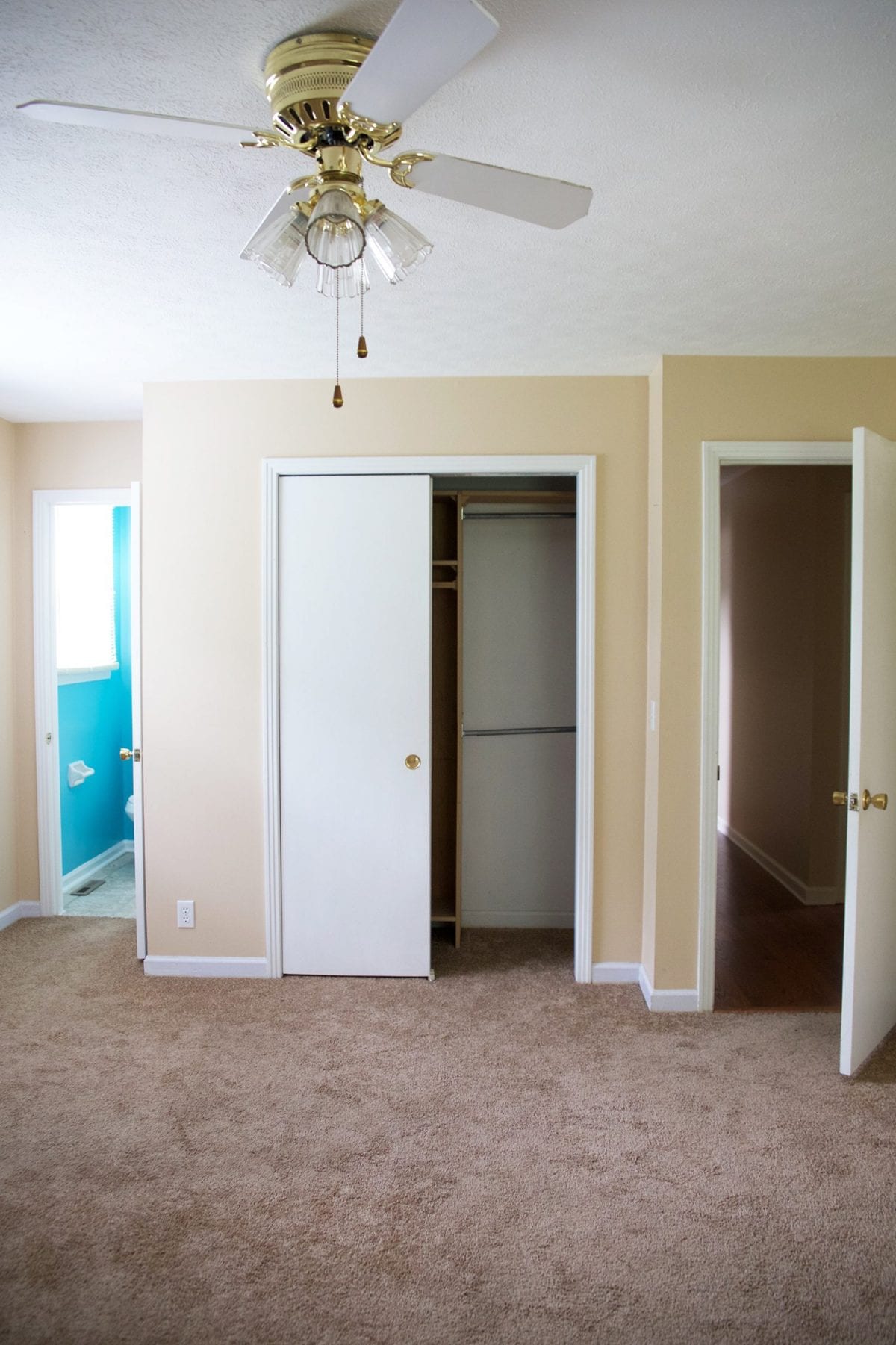 Remember this closet? I think we’ve probably been the most vague about this little bathroom space, and we’ll be sharing more on it, as well.

But it will be ours at first, and then Emerson’s space after the phase 2 addition.

We bumped the wall out, and changed the configuration, so we have a walk through closet, into the bathroom. Which practically doubled the closet space, and gave the bathroom just a few inches more of space, as well.

It may not seem like it, but this has made a huge difference. 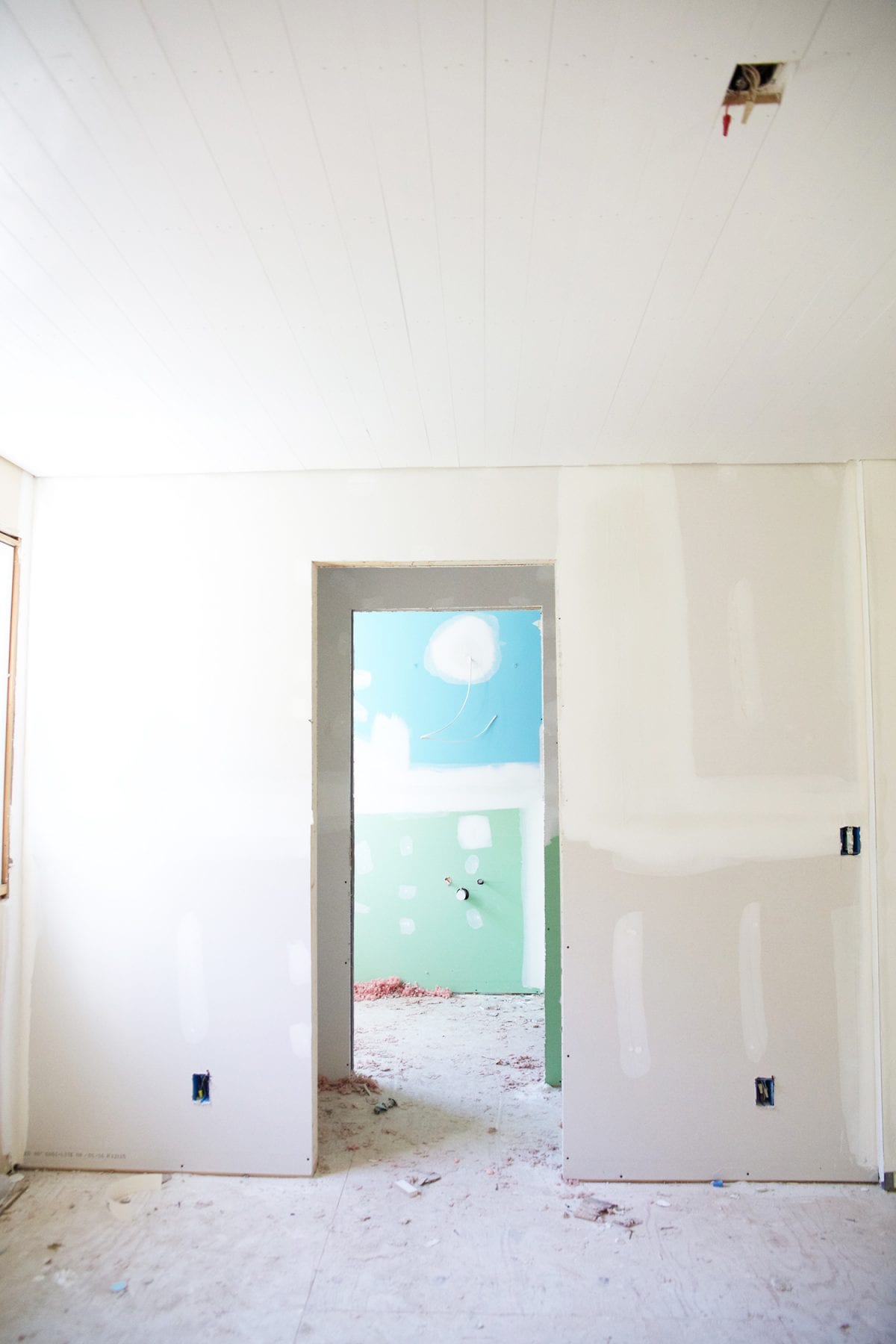 And so the mudding began, as well. It’s a little of a slow going process, because it has to dry. But it’s pretty satisfying to see all the little crevices, nooks and crannies all smoothed out. 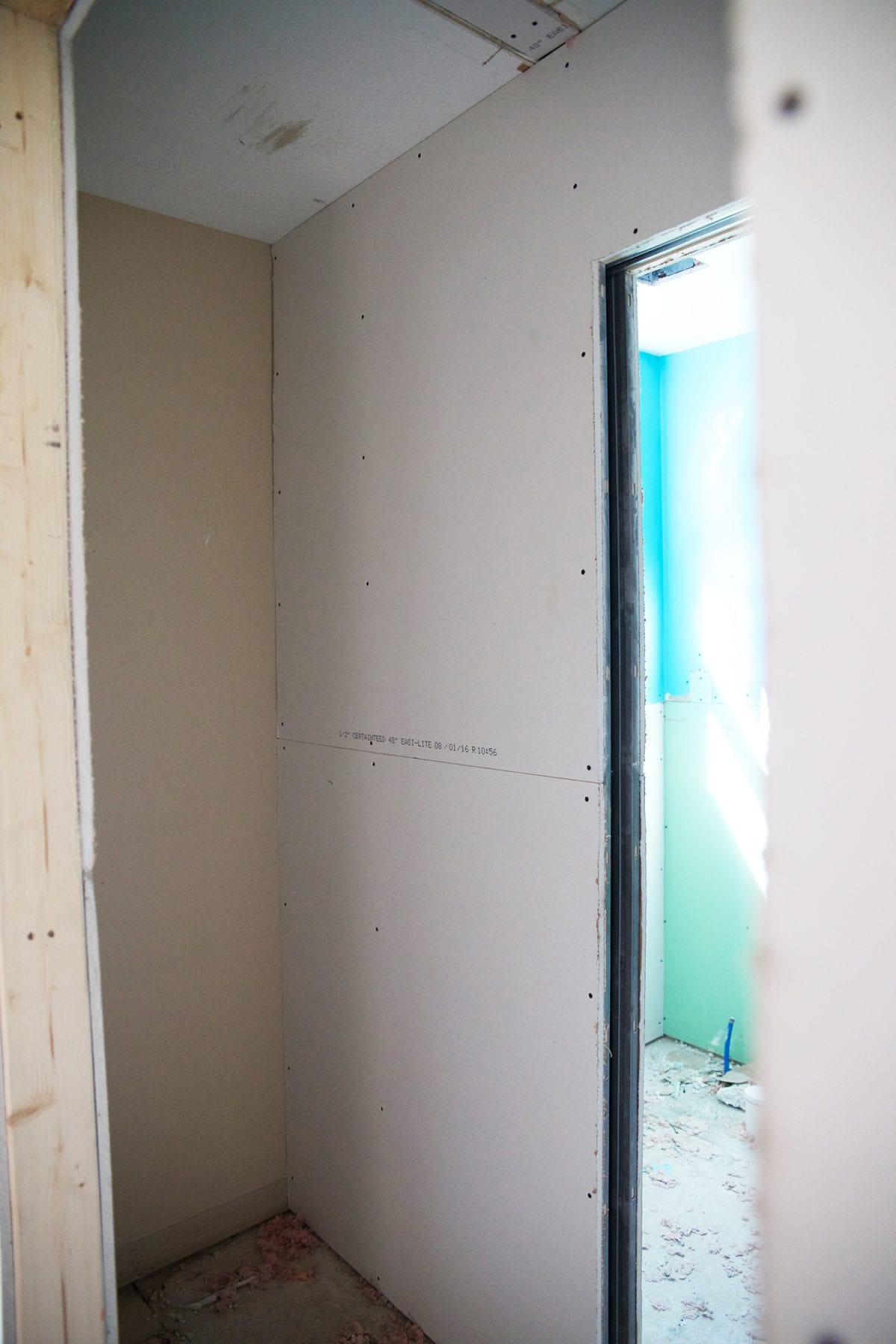 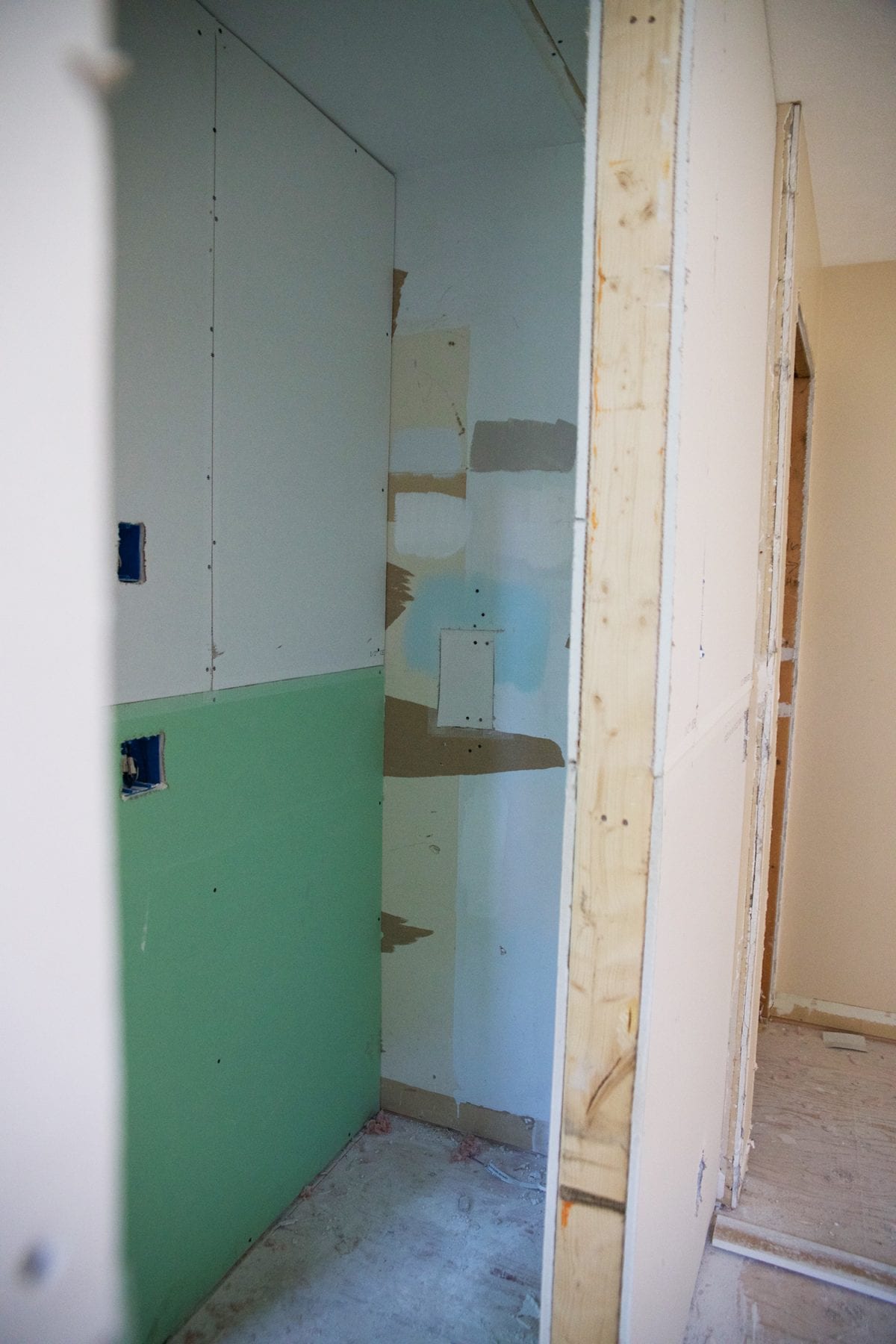 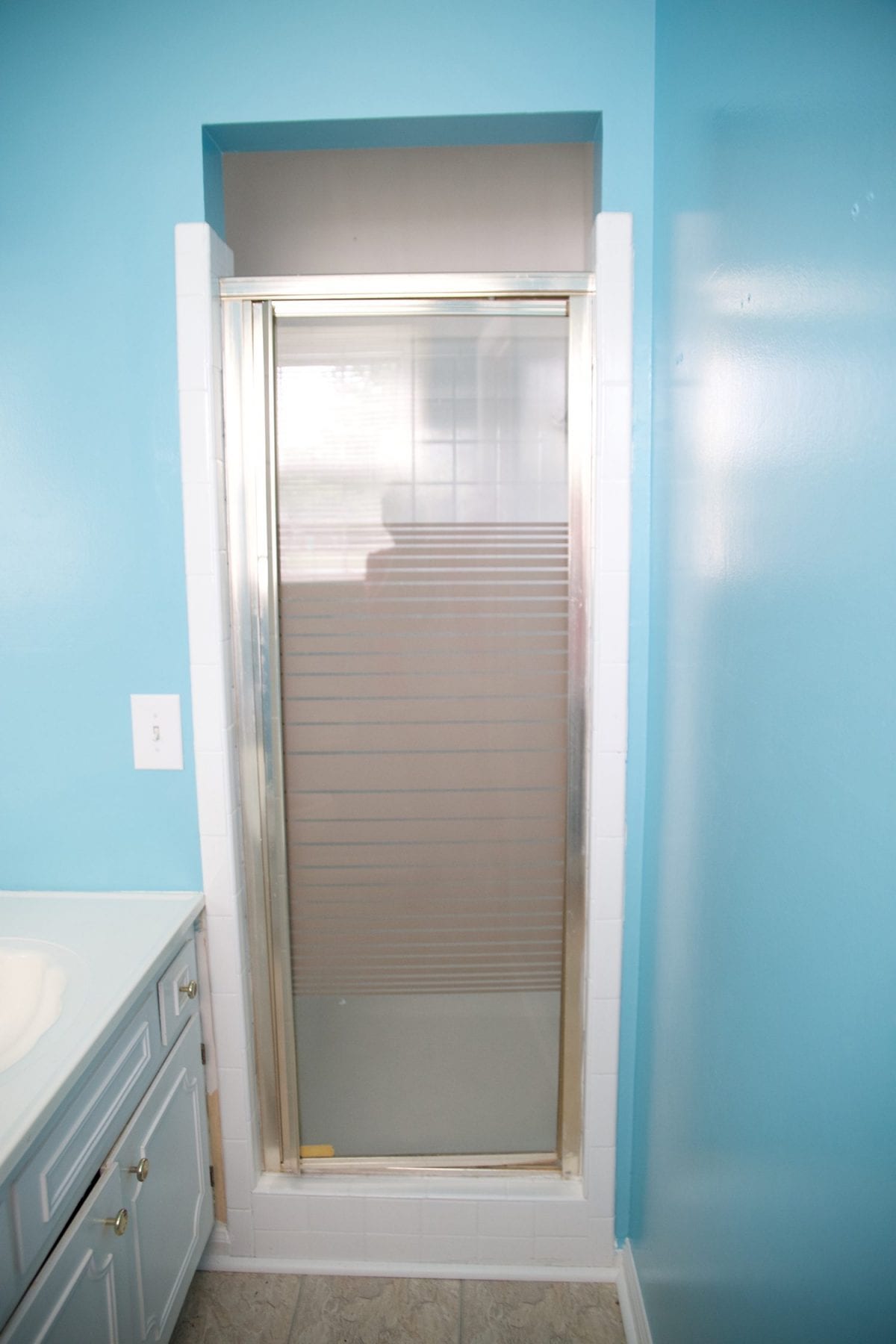 The shower area was opened up, whereas before it was a tight little door, this will be frameless glass and a bit larger of a shower. It’s a little less claustrophobic. 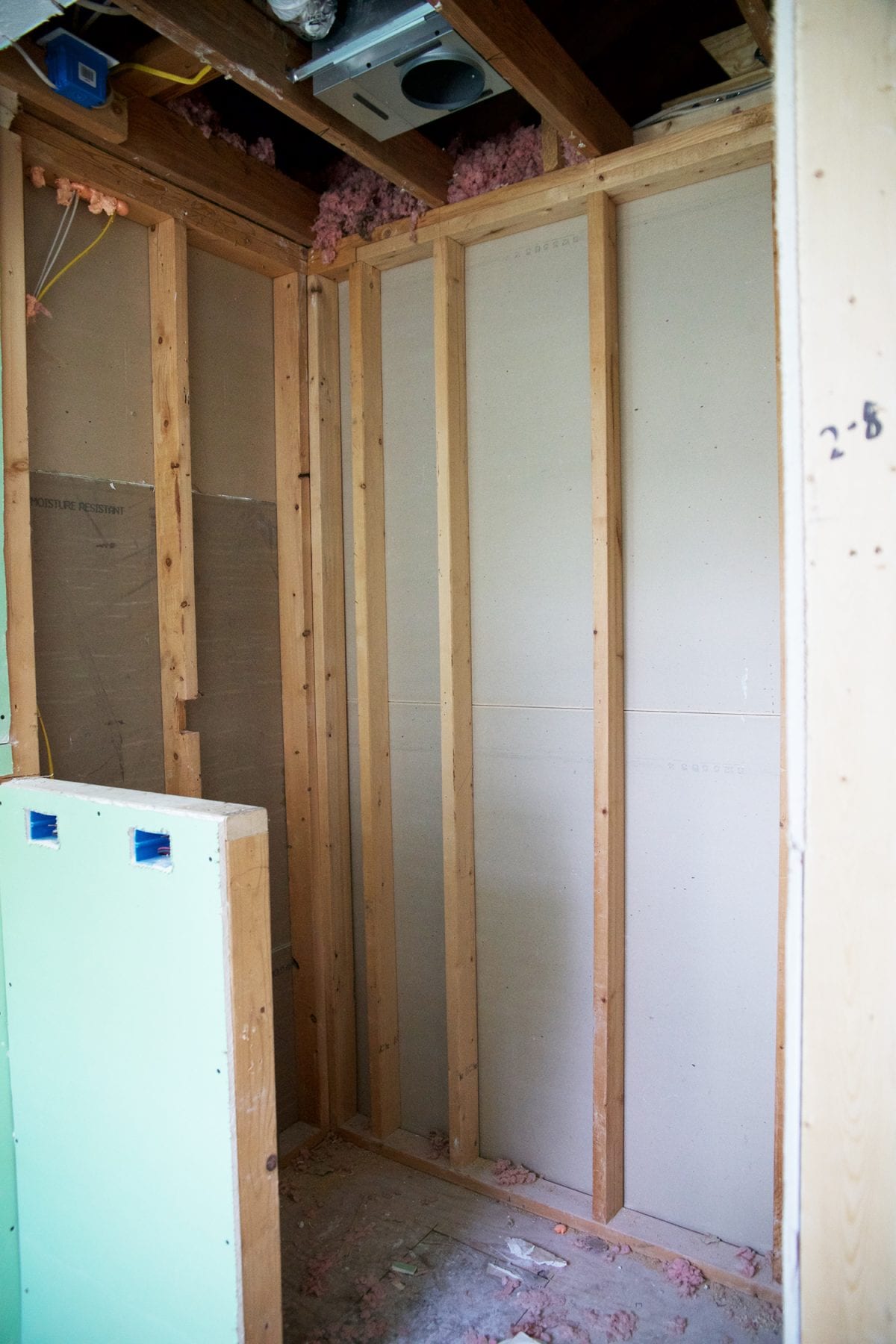 Tiling will begin soon {next week}, too. 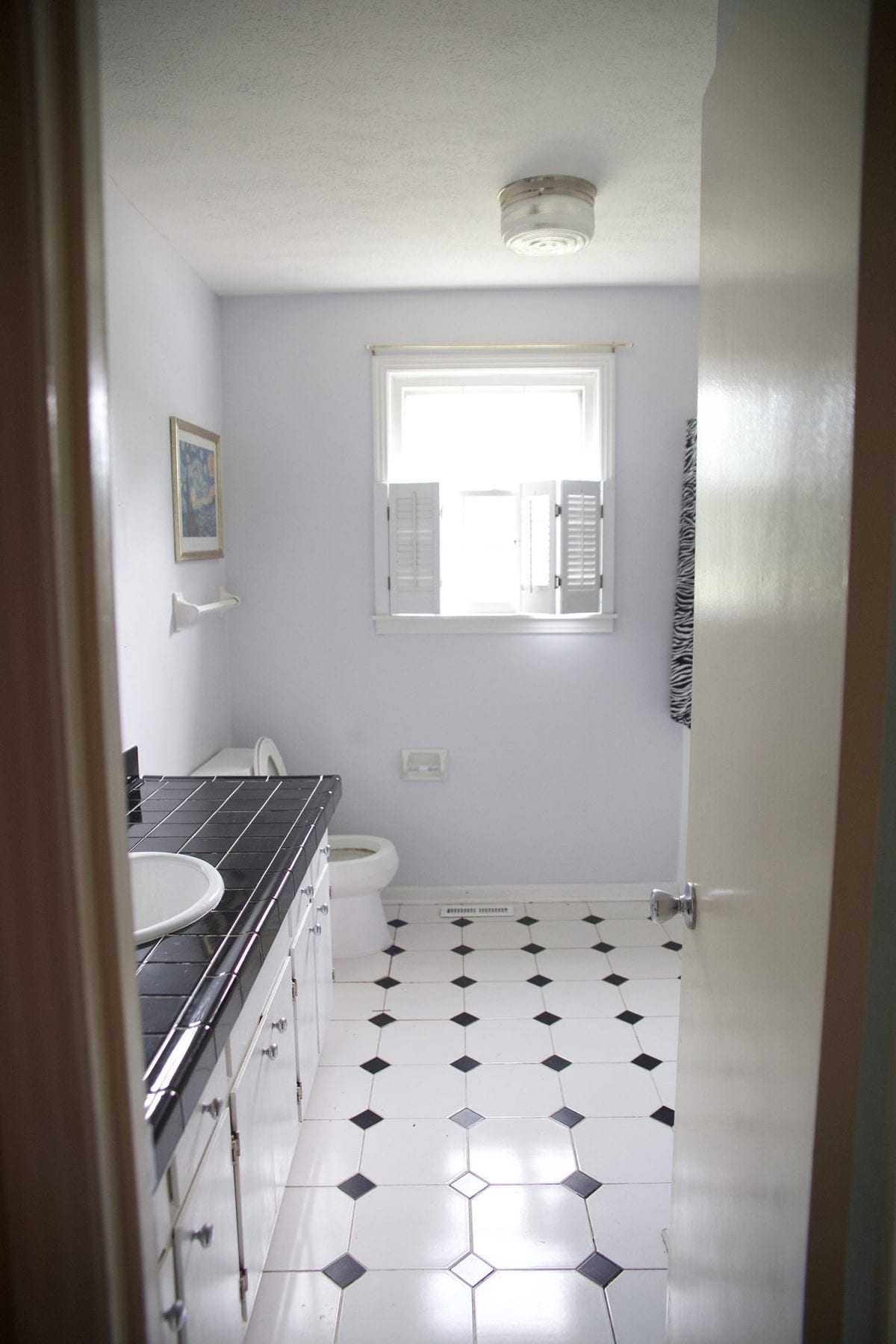 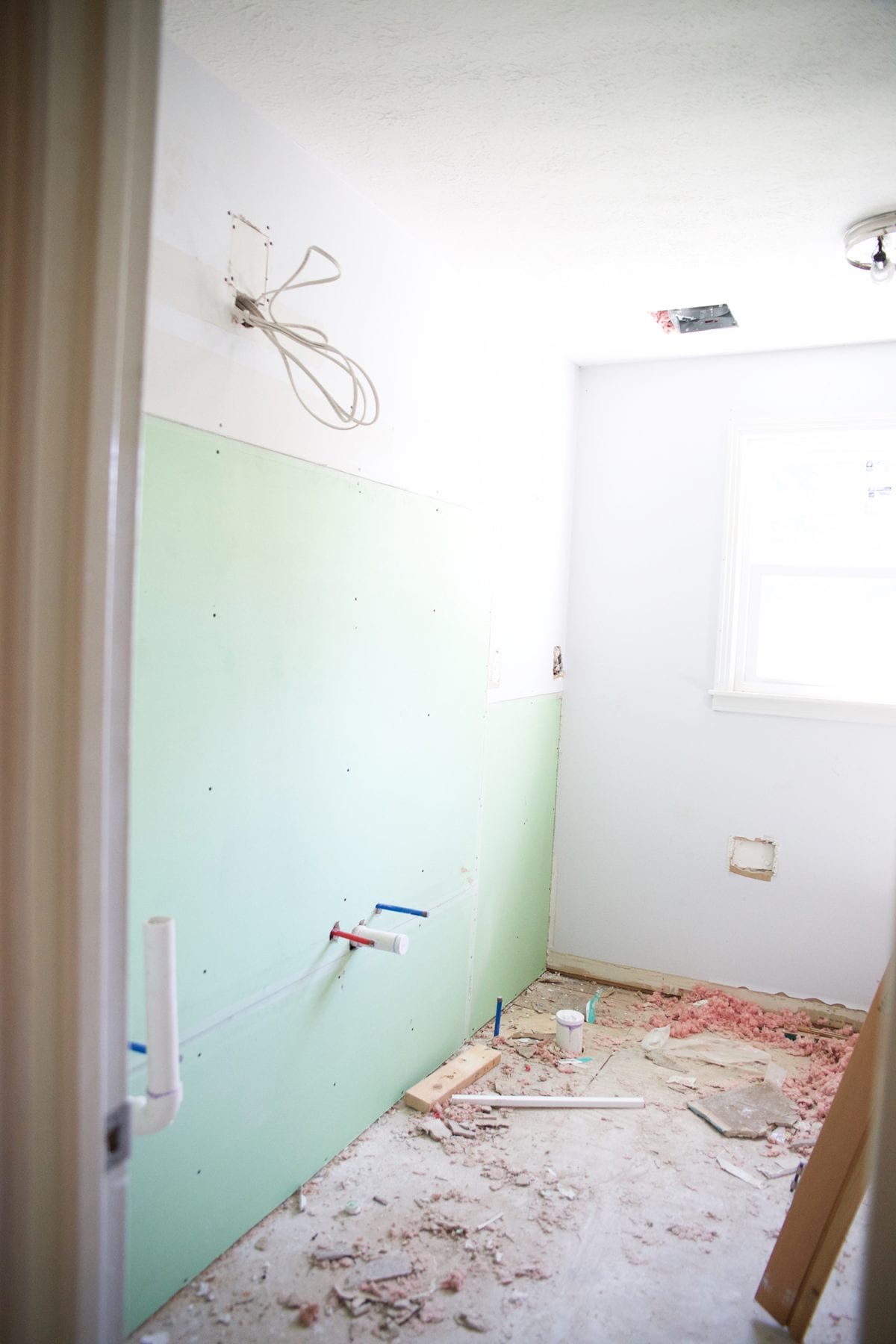 Smaller shiplap upstairs… and larger shiplap below on the ceilings.

{The vertical seams you see will be where the other beams hit, running perpendicular on the ceiling with the main beam} 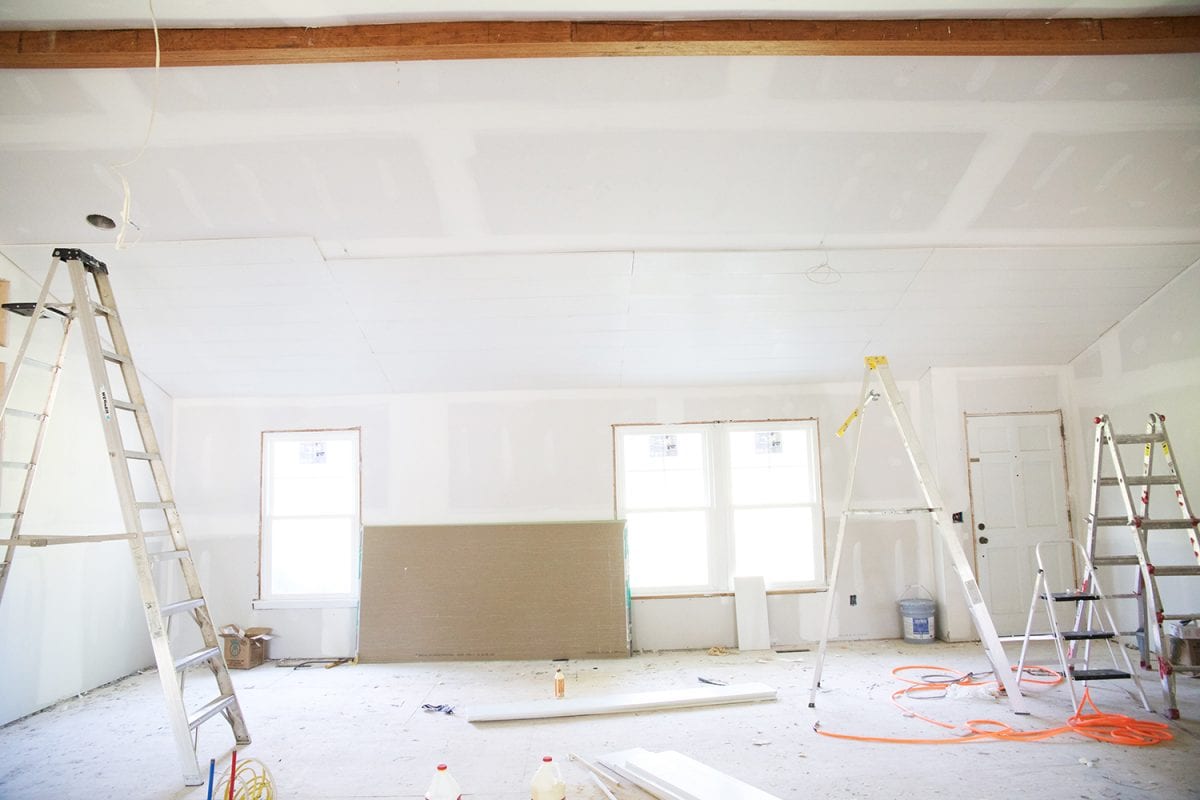 And trim and doors are next as well!

More details on all of it… coming your way.

Apologies in advance if you’re over the house posts. ;} 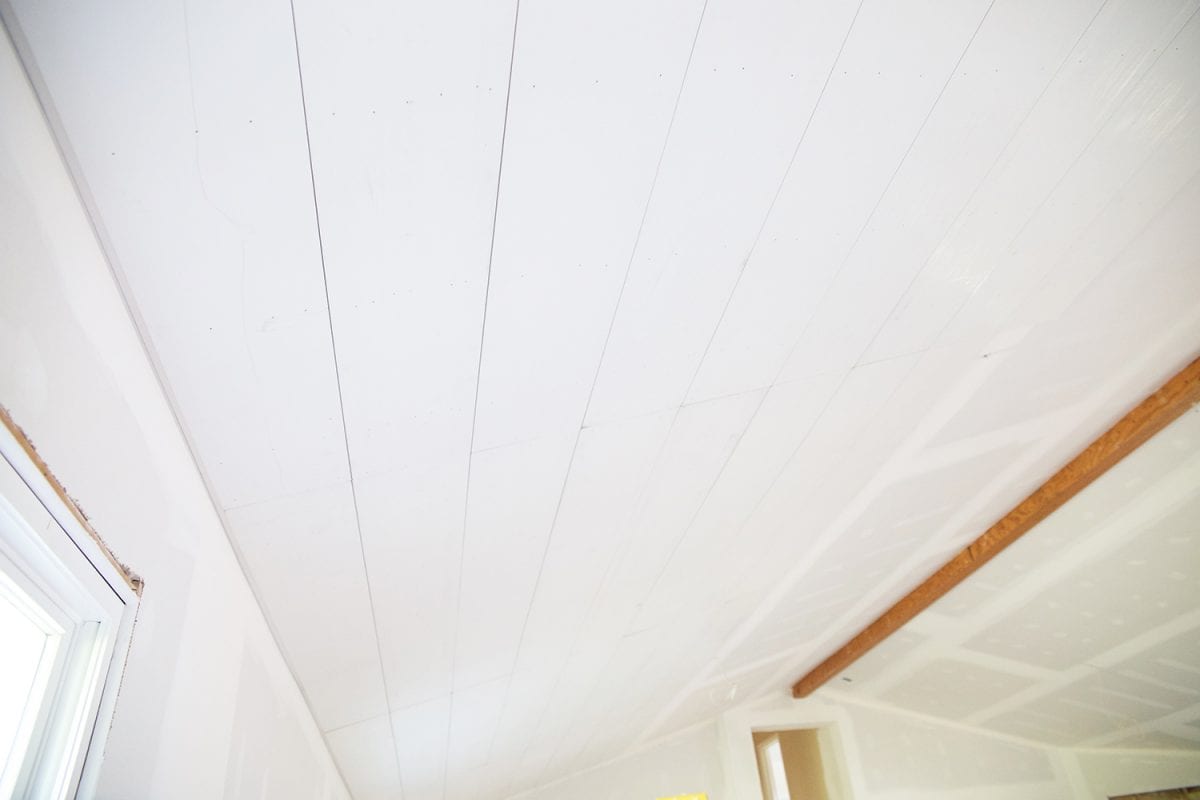