You are here: Home / confessions / beauty and the bees

We had our annual fall festival at our church last night. The kids had a blast. They went as bees. Emerson was the queen bee, and my sweet little men were honeybees. 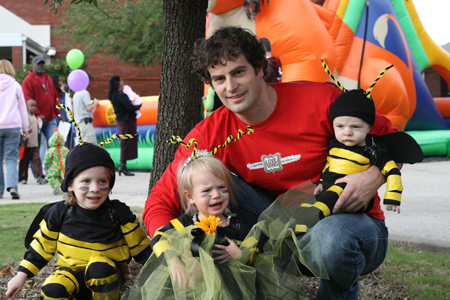 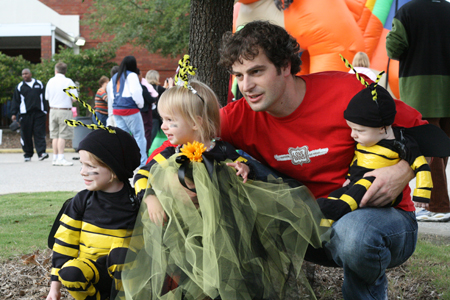 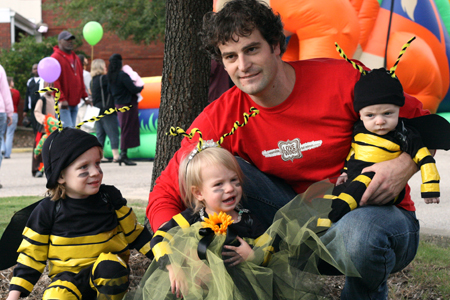 Too bad Emmy was acting the part, or I could have scored a great shot of all of them. Her tiara made her all moody. Guess it wasn’t big enough. 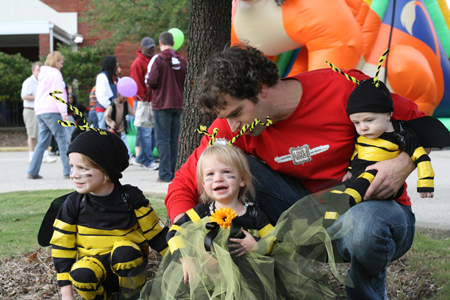 I made their costumes again this year, so we showed up just so we could snap a few pics, and then I disrobed them again. These puppies have to make it through to Halloween and a school party as well, and the kiddos were itching to do some major damage in the bouncy house and giant 22 ft drop slides. The idea of tearing these things up after all that hard work nearly leaves me hyperventilating. If I’d nabbed a cheapy at Target, that would be fine. But babes just wanna have fun, so jeans and tees it was for the fall festival hooplah. 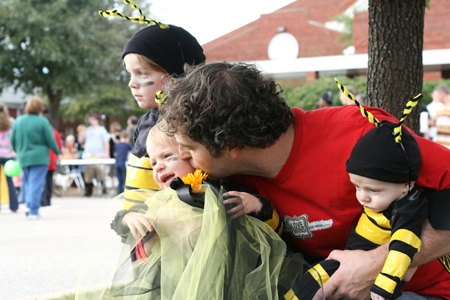 Maybe the whole go-to-all-that-trouble for a homemade costume seems ridic to some. But its important to me to take the time for my children. One day they will look back at these ever so fondly and laugh. Not to mention, sweet little keepsakes for their own kids one day. I’m holding on to all their costumes, and storing them in a fun wardrobe later on, so they can play dressup. Okay who am I fooling? They’ll just grow up all resentful that I didn’t buy the mass produced costumes. You can’t win em all. But I won’t be able to do this forever. So for now, I’m truly eating it up. I love being done with birthin these babies. From the bathroom to Halloween costumes, its so much fun to do little things for them.

That, and aren’t they just the cutest ever?
I’m not a gusher. But I just can’t help myself. They were definitely the cutest little bees there. I could eat Malone. 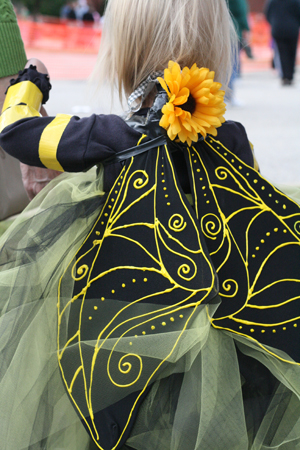 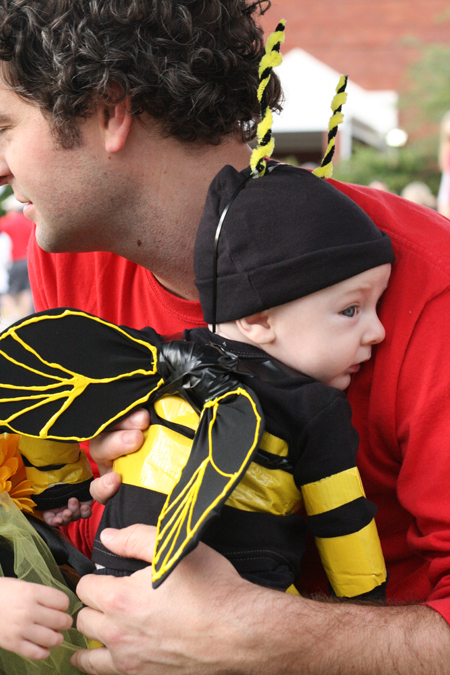 I’ll try and score a better group pic on Halloween night. I want a framed one…

Aiden and Emmy showing off their wingspans… 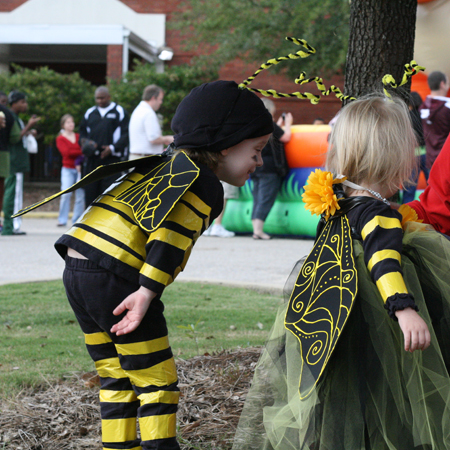 It’s absolutely insane to think that this time last year, Emerson wasn’t even walking yet. I was also pregs and had NO CLUE. My how lives change. My how time flies.

These costumes were simple to make. No sew at all! I ordered some clothing from Dharma and dyed them. I then took strips of tape for the stripes. Their wings are coat hangers with tights stretched over them, and yellow puff paint for the design. Aiden wore high tops and Emerson wore crocks with flowers on top. I made Emmy’s tutu with some tulle knotted over Elastic. Malone’s wings are smaller, so they were made from one coat hanger. They were all secured on their backs with electrical tape, and their antennae are pipe cleaners on headbands. Emerson’s is garnished with little acrylic jewels. Viola. Bees. 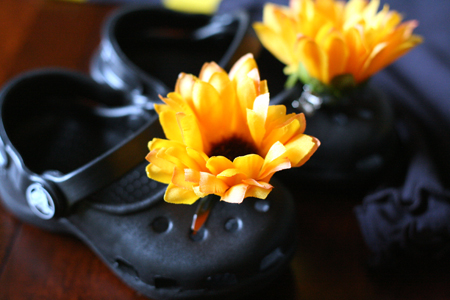 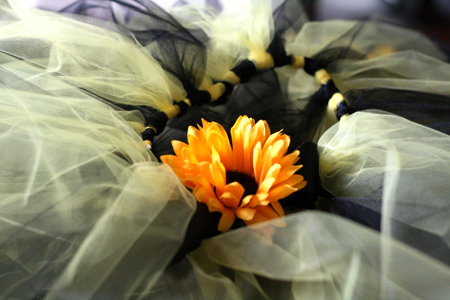 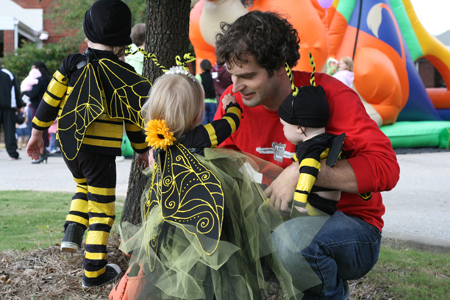 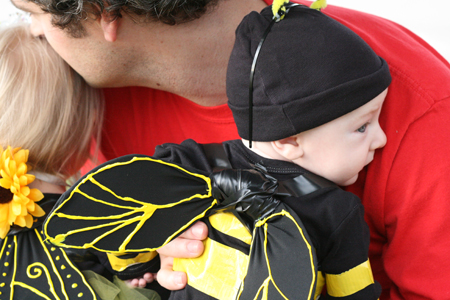 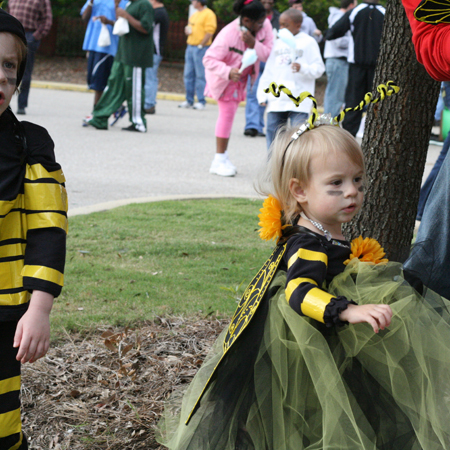 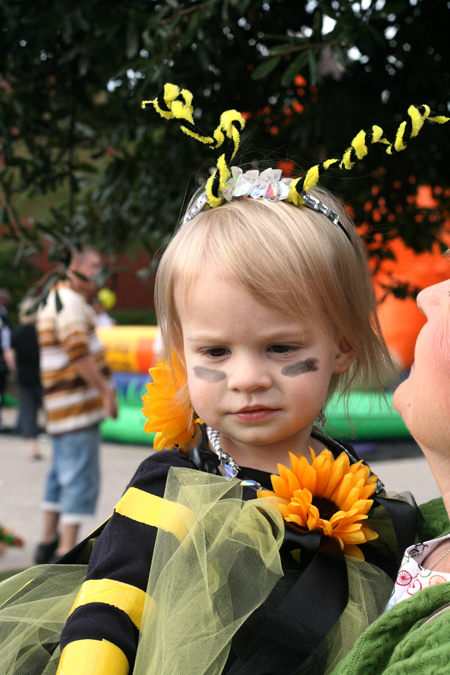 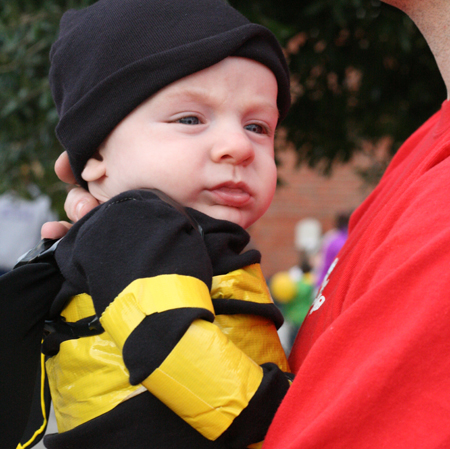 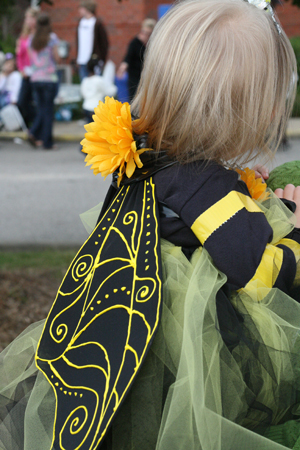 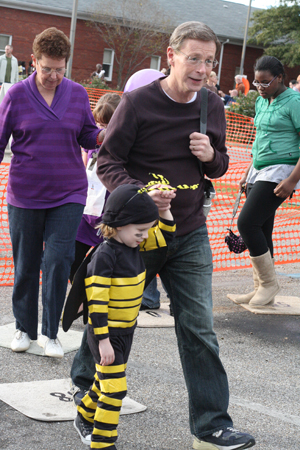 Papa & Aiden doing the cake walk: My parents were super sweet to show up and have fun with the kids. They all had a blast. 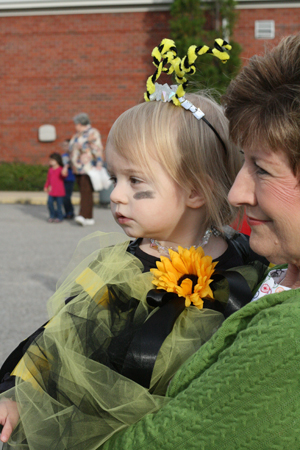 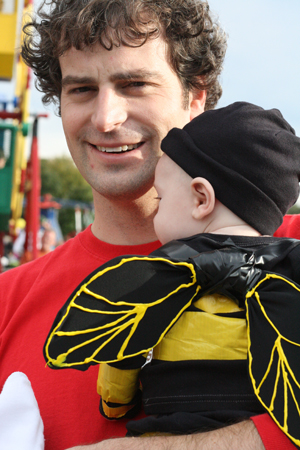 Honeybee Highness looking on as my mom holds her. Malone snuggling with Jamin. 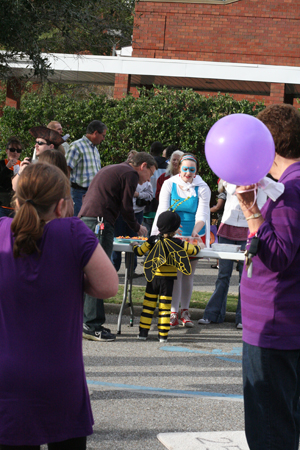 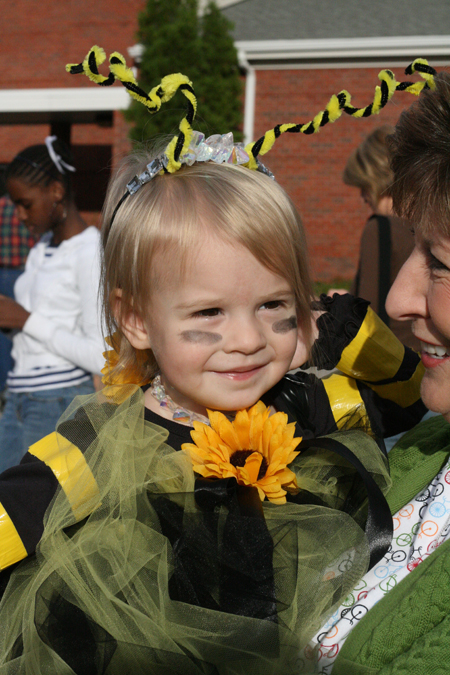 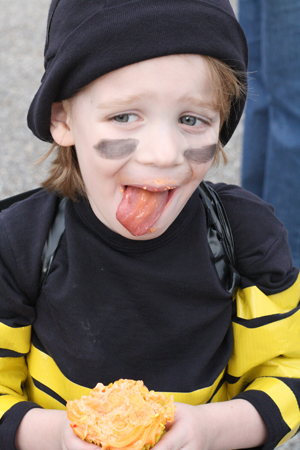 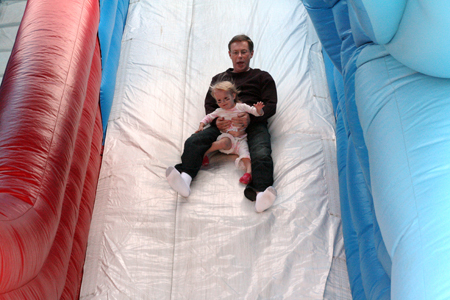 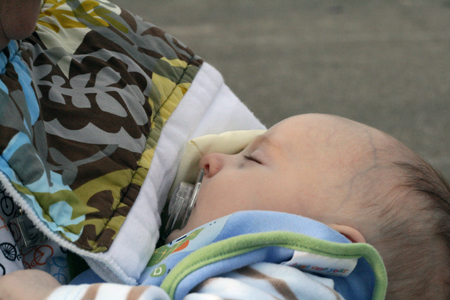 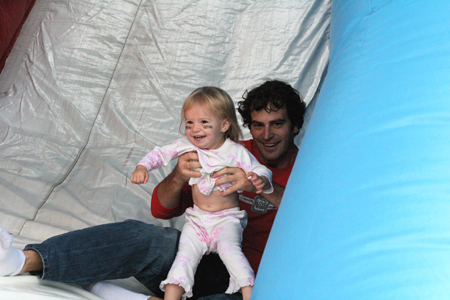 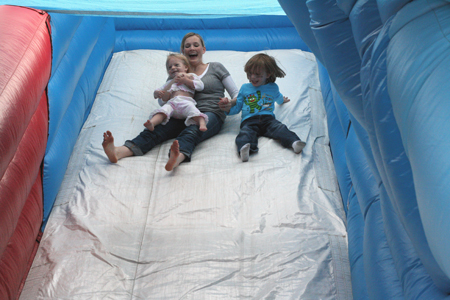 Oh LOOK! I WAS there! There is actually a photo documentation of my presence! Dude. Check out my Walmart feet. 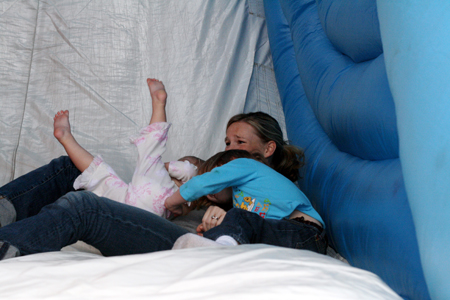 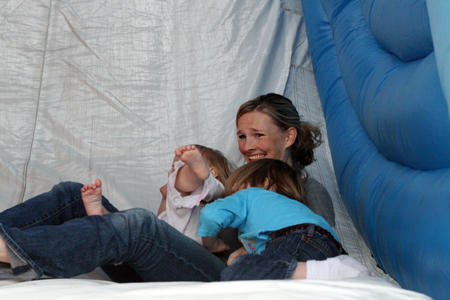 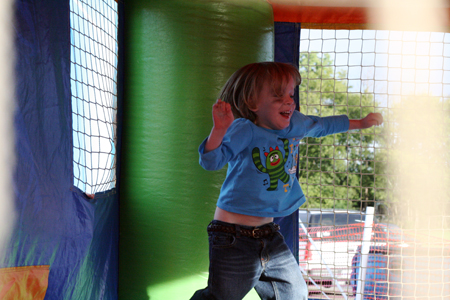 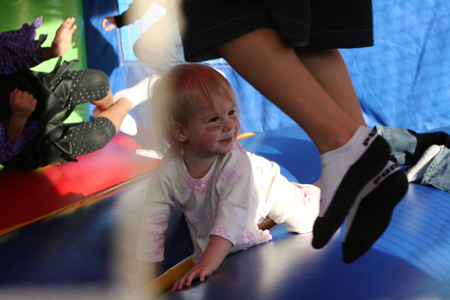 Emmy was holding her own in the bouncy house with the big kids. This was right before she totally got smacked in the head. She laid there for a moment, poked out her lip, fought back the tears, and got right back up. When it was time for everyone to come out, she wouldn’t. She was all, come and get me, suckas!

I totally had flashbacks of field day in the fourth grade. A friend and I were bouncing, and thought we would hide when it was time to get out behind one of the big fat collumns. Only this other girl came and hid with us. She was a bit on the hefty side. We kept motioning for her to get lost, as she was a dead giveaway to our location. But she bounced happily over to our spot anyway. The entire moonwalk fell over. We tilted the entire thing. It wasn’t anchored down. And we couldn’t get out. I remember the teacher yelling at us while we were swallowed with giant swells of netting and smelly, rubbery plastic. Drama.

And that, my friends, brings a grand conclusion to fall festival 2009.

the beauty of contrast