SO, I know Halloween was last night. But I decided to take some pics of a boat building process in case any of you are ever interested. I will store these away on my external hard drive, and forget, I am sure. But this time next year when someone says, “you know that pirate ship you guys were crazy enough to build last year? How did you do that???” I can send em this way! View some more of our halloween pics here. 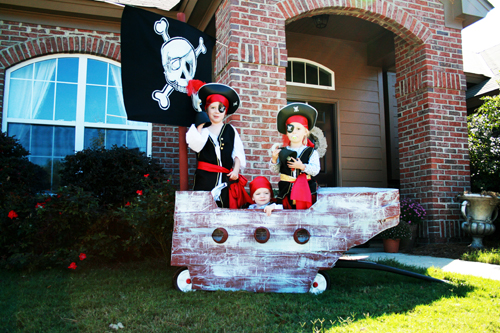 I mean, you don’t even necessarily have to have one of these puppies for halloween. Who doesn’t want a stinkin ship to be pulled around in? I know I do. I want to scream random comments at people like, AVAST, YE HOSTS! Get me some LOOT for my BOOTY! And other weird combinations that won’t make any sense, until someone cranes their head in the general direction of my voice in the local ghetto walmart parking lot, to see me standing there, decked out in pirate garb atop a children’s wagon. Then they’ll understand. 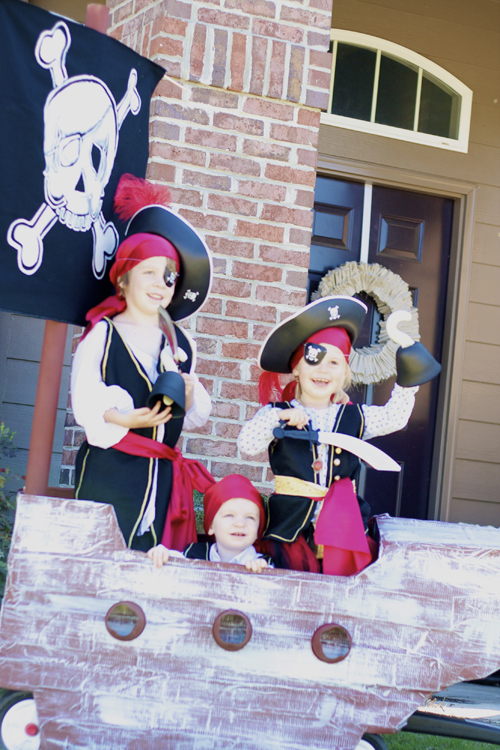 It will all make sense. Want to visit the zoo? Pirate ship. Have a wedding to attend? I think that totally calls for a pirate ship. And there is international talk like a pirate day, after all. Hurray for pirate ships!

SO, Here’s how to make your 25 dollar pirate ship spooktacularly piratelicious. (we spent 25, and if you don’t have some things, like a wagon, or paint, you may spend a little more)

a wagon. (use your family wagon, because you can take this all off when you’re done.) 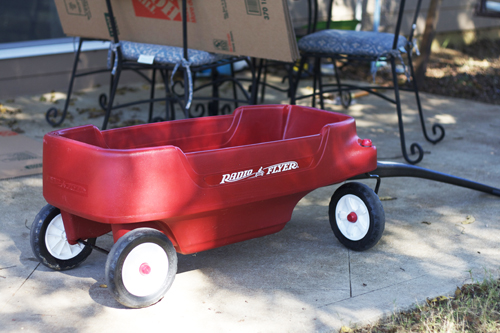 Two large cardboard boxes and a few smaller ones. We went a little overboard with the cardboard because we weren’t sure how many messups we’d need: 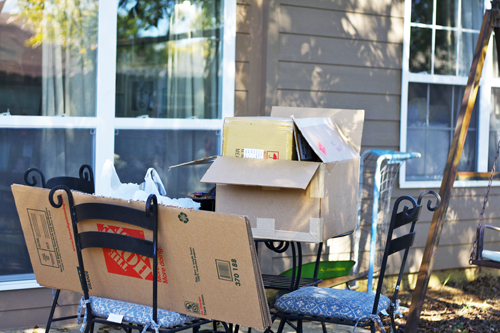 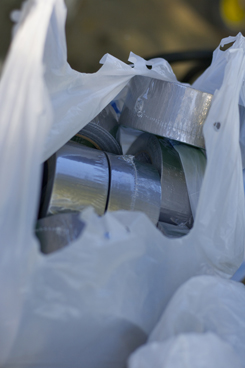 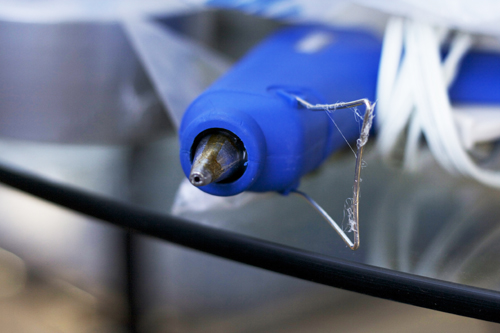 1. Duct tape. Lots and lots of duct tape. And save the receipt, cause you will be taking some back. 2. Old trusty: aka your fabulous glue gun. 3. A couple of Box cutters. 4. A tall narrow circular thingy for the mast (see below: I used the things that bolts of fabrics come on) you could also use a big plastic pipe. 5. half a yard of black fabric 6. Chalk 7. brown spray paint 8. silver paint, and any other paint of your choice. 9. 6 solo cups 10. two long dowels 11. drop cloths (3 large ones) 12. paint brushes 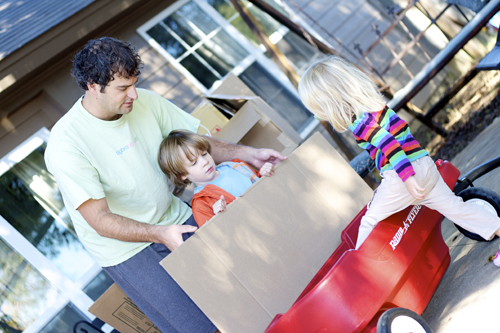 you’ll also need another adult to help you (or make your life easier. Feel free to do it youself, but it’ll take about a day and a half without a second person!) OH, and about three children ages five and under to make your life more of a challenge. So those two kind of cancel each other out. But hurray for fun filled family fridays! 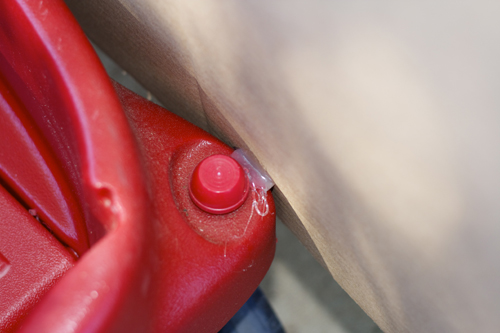 we cut two very long pieces of cardboard, and adhered them to the sides with a dabble of hot glue in three key places. Don’t cringe: the hot glue will pop right off later with a knife or screw driver. Just two long pieces, at a basic rectangular shape. 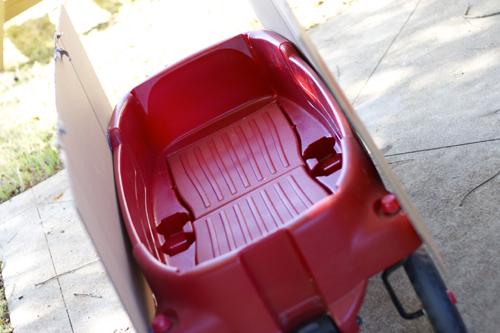 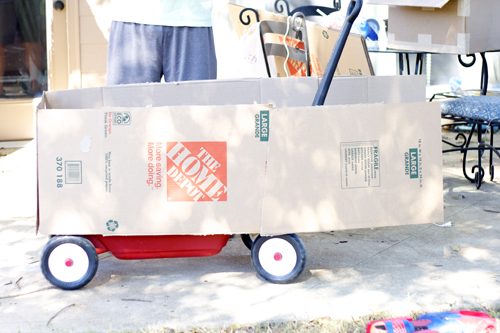 We then added the back piece, and an extension to the sides, with more glue gun. This is where your artistic flare comes in, because it’s just adding on to the longer pieces, to create the front of the ship. (the front ideally where the handle is) 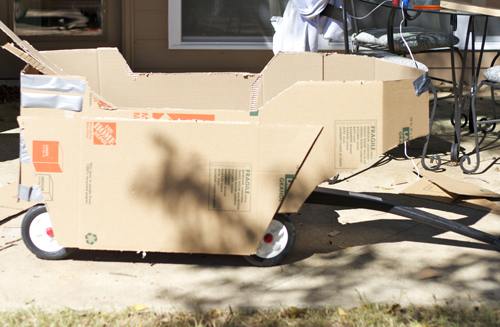 To these pieces, we added two more, at the base, to cover the bottom part of the wagon, and cut both at an angle, with the basic shape of a ship. We tried our best to make sure both sides were even as we went. They actually ended up a little wompy, but hey. It’s a halloween prop. (the perfectionist in me had to remind myself that) 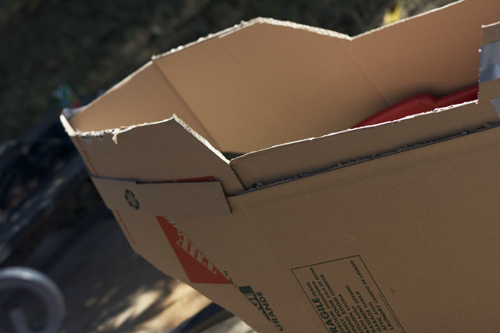 We then brought the two front pieces together to make the bow of the ship. We secured it with duct tape. Then, we decided to cut long strips of cardboard, and start positioning it on the boat, with every other space, to add dimension. We secured those, once again, with hot glue.

In the meantime, we tried to add a little more curvature to the back of the ship, and seal the crevices with duct tape.

At this point, I was starting to seriously doubt our attempt. It looked more like a little rascals boxcar derby than a pirate ship. But stay with it…I also trimmed up all the overhanging planks with a cutter (rather than cutting them beforehand, because that would be tedious. 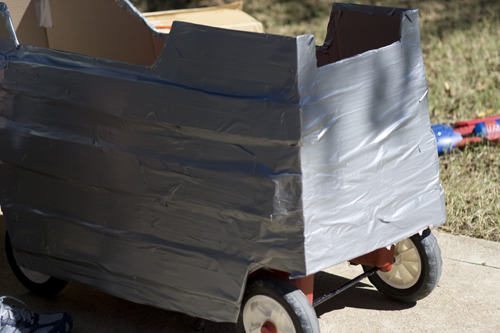 Here’s where the duct tape comes in. On top of all those layer’s you’ve built, bust out the duct tape, and coat it. Completely. It tends to join all those crazy particled parts into more of a uniform shape. 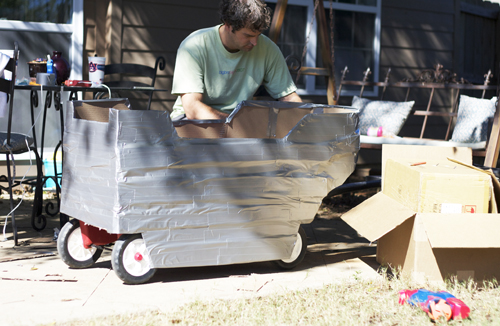 see how the top of the bow is still open? cut a piece, according to the shape of your ship, for the top, (where your chlidren will NOT be sitting. 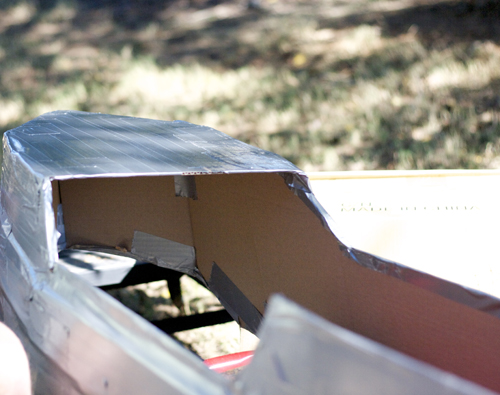 then add a piece that serves as a flap, that goes all the way down to the seating, so it looks more like a boat when looking down on it. 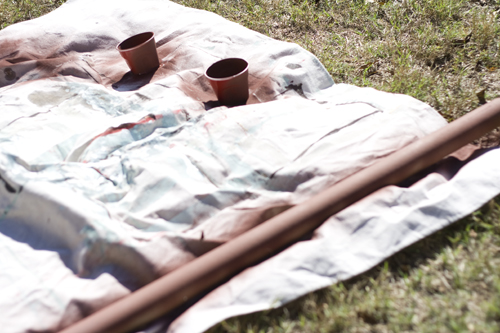 In the meantime, that giant pole that serves as a sail holder (I don’t know the correct term so stay with me) can be spray painted. Along with six solo cups with the bottoms (about two inches) cut off. The solo cups will be your cannons on each side. 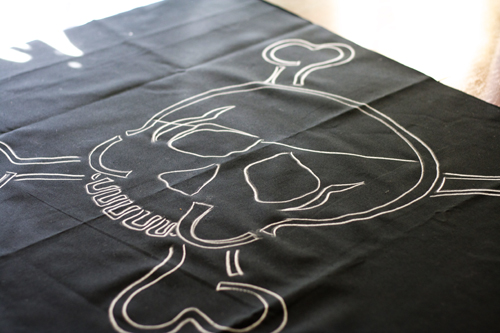 I looked up a scull and crossbones for reference on google, and freehanded this skull with some white chalk. I realize some of you may NOT be comfortable with freehanding, so tracing with paper, or even purchasing one at your local dollar tree, may also be an option. I might even try a projector, with a selected image shining on the fabric. The possibilities for this, are kinda endless. You could even sew a cute one with felt and black stitching.

This was my favorite part, so just get creative and have fun with it. 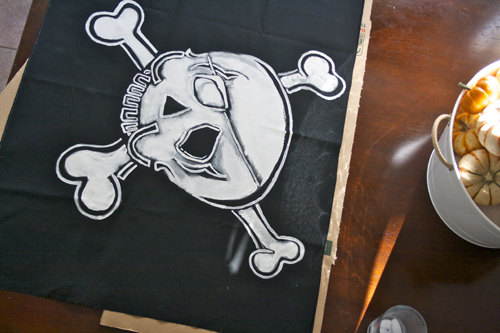 And while THIS was drying, I went back outside to my boat. I covered the areas that were exposed with drop cloths, and had at it with the brown spray paint. inside and out. (be sure to cover the inside with a drop cloth as well!-AND the wheels!)

I then went back over it with a brush dipped lightly in blue/grey paint, and then grey paint. I brushed lightly over it for an aged, dry brush kinda look. 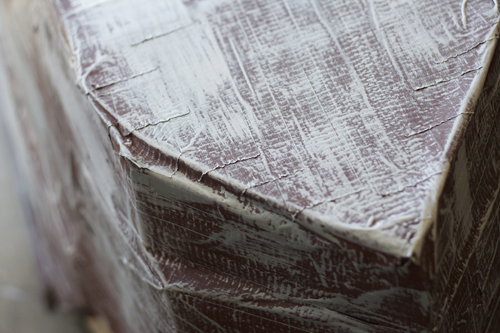 Adhere your “cannons” to each side, in threes, of your boat.

Take the two dowels and hot glue them to the top and bottom of two dowels, and then adhere them to your pole with hot glue. Take your pole, and place it anywhere in the wagon you think will work best. We stuck it to the back inside part of the ship, first securing it with hot glue, and then adding a generous amount of duct tape. If you’re not careful, the sail will blow over in a strong wind, so always have an adult standing nearby! 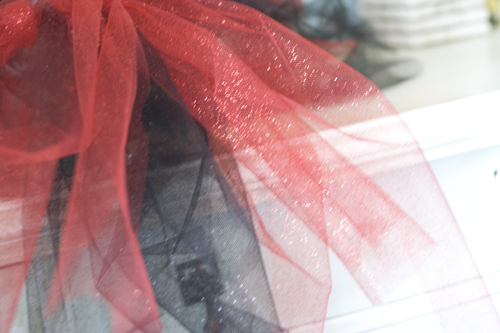 a sparkly tutu for emerson 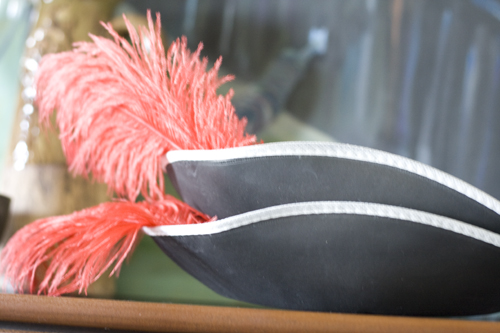 a couple of hats from the dollar tree, with red feathers glued to the top 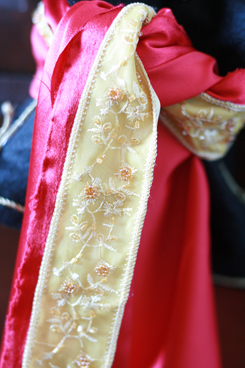 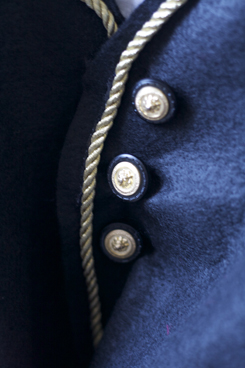 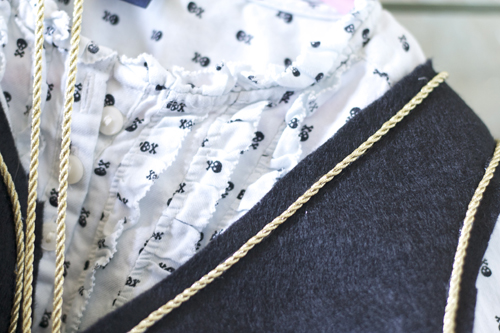 I sewed black vests in a simple made up pattern, for all three, trimmed in gold rope (adhered with a glue gun) and placed over leggings and a shirt for emmy, and jeans and white shirts for the boys. I had some gold buttons around the house, and added those, as well. I also cut strips of red fabric for belts and head decor. 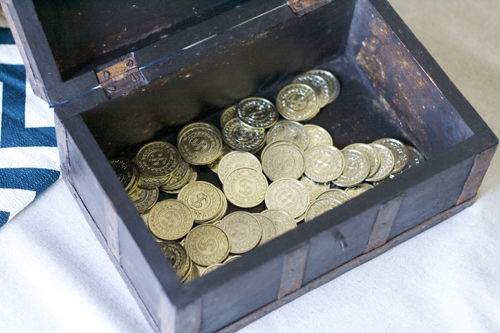 throw in some treasure (in an old box I had from Hobby Lobby) some eyepatches, earrings, swords, etc. and we have quite a crazy crew of pirates on our hands! 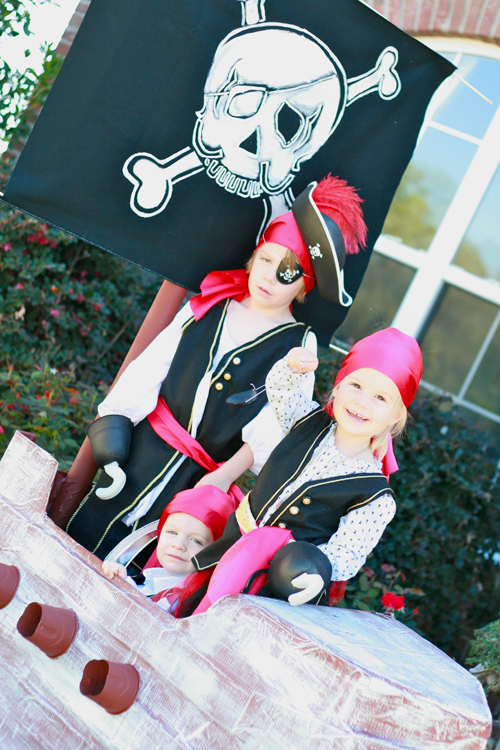 we had a blast. Happy Halloween!!!