It was the week of Thanksgiving, and we’d just begun to catch our breath.

If you’ve been reading for a while, then you may know that things have changed drastically around here for us via the website/business realm in the last few months. With the launch of our studio, there have been a lot of moving parts. We had everything up and running and somewhat organized, but we needed a better system. From bookkeeping to product storage… Sometimes, it can feel like there’s just a lot to figure out with the day to day stuff. It’s part of running a business. It’s life.

So we decided it was time to tackle our garage. I know, right? Because ’tis the season to organize garages! We make perfect sense.

Our makeshift workspace, we were {temporarily} storing everything there for now, until we established our system. And we decided it was time to reorganize for a streamlined process. Since our home is still on the market {Wheeeee!} we needed it quickly. So we were conquer and divide that day: The kids in the garage with dad, clearing out some things, while I worked on organizing the christmas decor. We could do this, we thought. We’ve totally got this.

Jamin had just taken the kiddos to run an errand, when I heard a noise in the front of our house. I assumed the dogs had disturbed something. This, of course, is not a rarity.

Have you ever been totally into something, so you just ignored whatever it was because at the time it didn’t seem important? I was all, Shhhh I gots to get my garlands on, despite the fact that the pups were in the kitchen, going bezerk. There could have been an escaped serial killer in the garage, lurking from his previous hiding place in the attic, but dangit, I was going to get the ornaments organized so at least the tree would be ready for the kids to decorate. I mean, DUH. Priorities. Figuring the pups heard a noise outside, I was in the zone. And when they wouldn’t hush, I finally entered the kitchen to calm them myself.

That was when I smelled it.

The unsettled feeling set in, when a horribly strong, yet vaguely familiar smell absolutely knocked me down as soon as I entered the room. It was the smell of stain. Or paint. Or something chemically that definitely didn’t belong/caused alarm. So, panic rising in my throat, first I did a quick check of the kitchen. And when I didn’t find a source for something so strong, because last I checked we didn’t have a hoard of paint cans in the corner of said kitchen, I braced myself and opened the door to the garage… which was right off the kitchen. 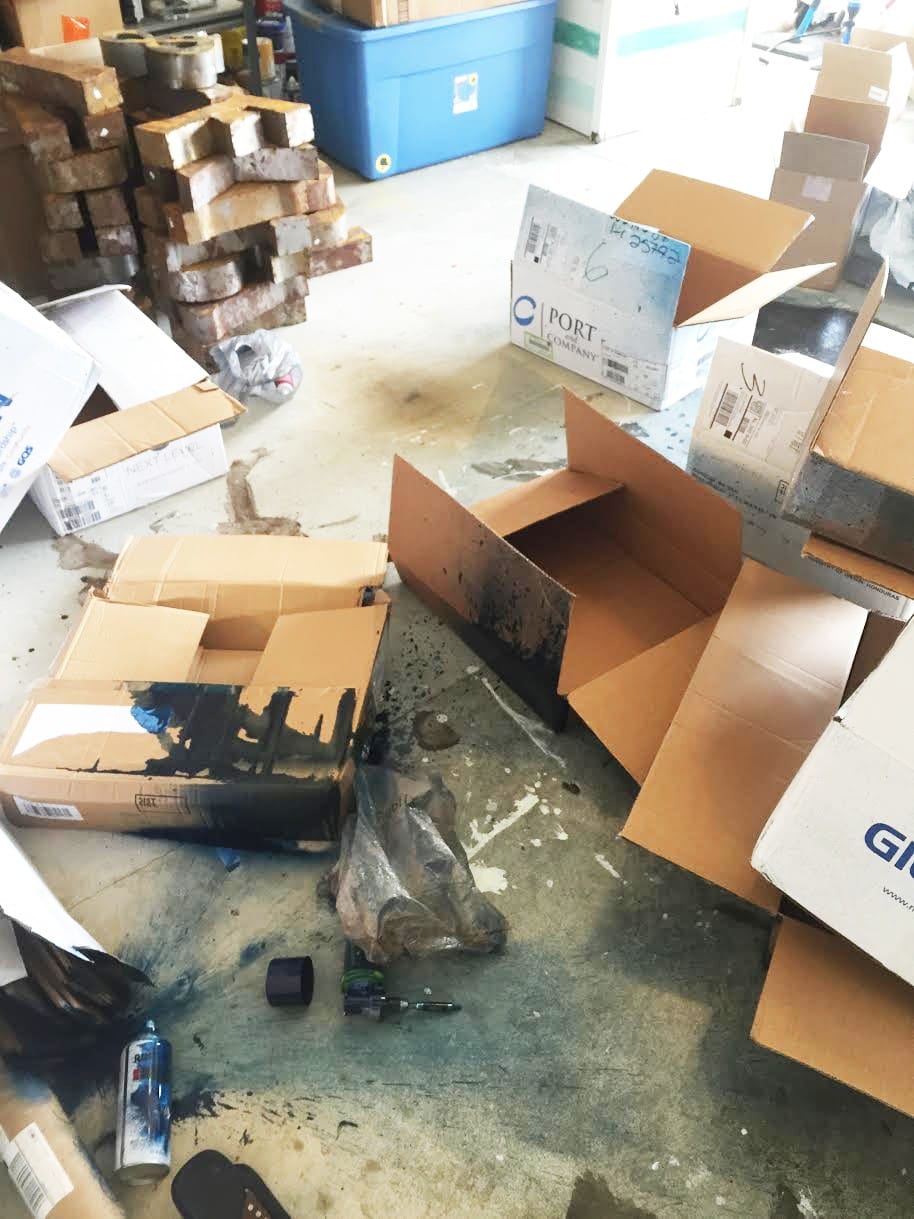 {This is a photo snapped with my phone, after I’d rescued what I could.}

But absolute carnage met my gaze, and I started to panic.

Box upon box of merchandise had been sprayed down by what we now refer to as the spray paint grenade.

This was our investment we’d made. Up front. As a {small. very small.} business. And it was covered in paint. Almost all of it. 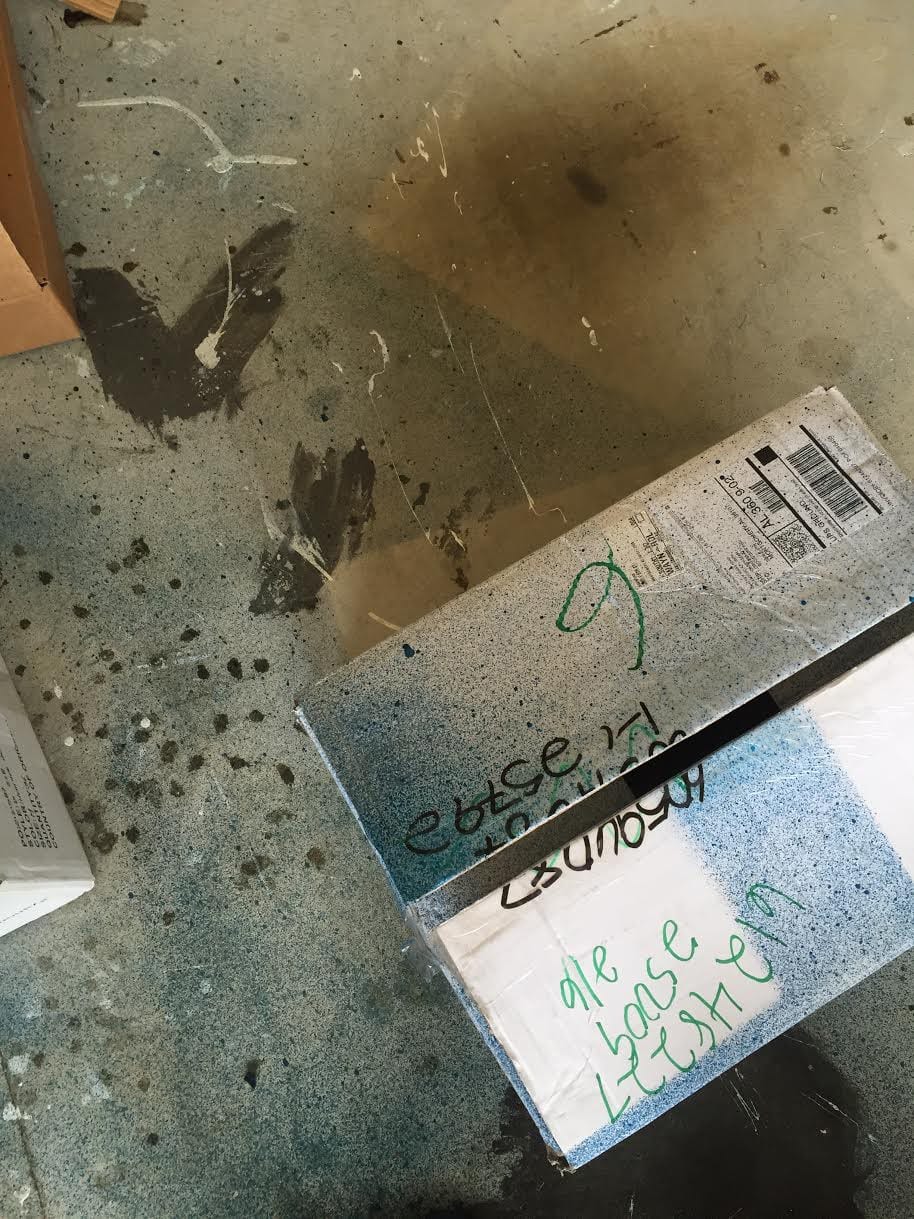 When Jamin closed the door and left with the kids, a screw driver had fallen off its storage space on the wall. {WHAT?} And it hit, of all things, a can of spray paint {which didn’t even belong there} on the floor below.

It, of course, burst right open. Spraying everything in its path.

I said later, that if I’d entered the room while said paint was being dispersed, I would have thrown myself on it. I would have been all, NOOOOOOOOOO! And FOOOOORRRRR THE MEEERRRRCCCHHHHAAAANNNNDDDIIISSSSEEEEE! as I threw myself heroically through the air and took one for the team.

Okay just kidding. We all know I would’ve run around like a screaming freak, picking the can up, and making an even bigger mess. That’s how I roll.

The paint was absolutely unbelievable. It sent a spray over half the garage.

So, I did what any sane person would do, and acted quickly. I carefully and quickly removed all that I could from the spots that were the worst. Some of the boxes had so much paint on them, I was afraid it would soak through from the bottom alone. Jamin had miraculously closed the boxes before he left, but between that and the smell, I knew we would take a loss, and wanted it to be minimal. 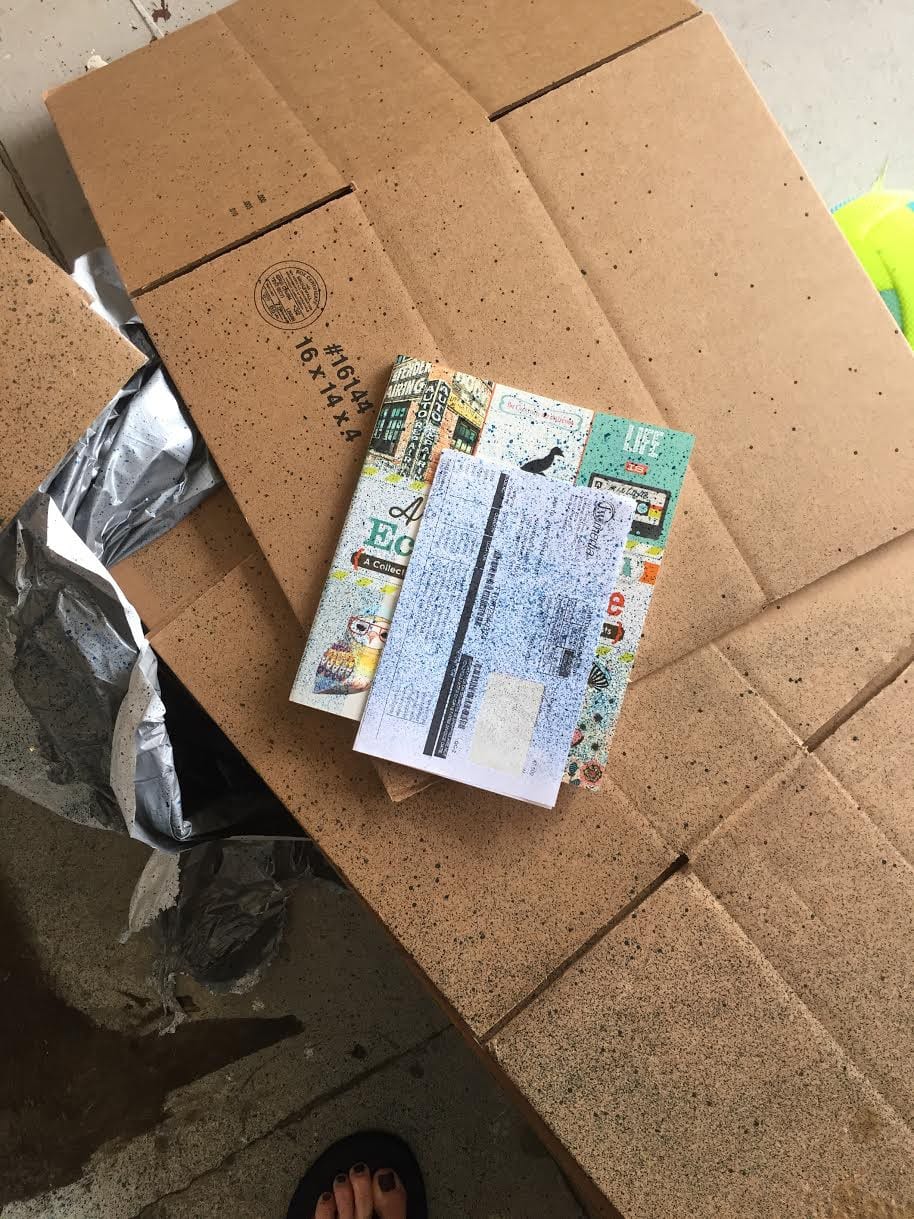 After a panicked phone call, Jamin quickly returning, and us salvaging what we could from the paint… we removed it all. But we lost a bit.

It was the most bizarre event, worthy of a Mills Household a-la Satan’s garden stool occurrence. Nowhere in the same caliber, but close in terms of random. I mean, seriously?

And when we stepped back to survey the damage to the floor, our garage, which we’d used for years as our workspace was looking even worse for wear. Did you know that once upon a time, we painted furniture in our garage? And built almost everything we’ve ever made right here? The floor showed it, and this was like icing on the we-were-trying-to-ignore this, cake. And while before, we just figured we wouldn’t bother until we sold our house or refinish once we’d moved everything out… we knew it was now or never. 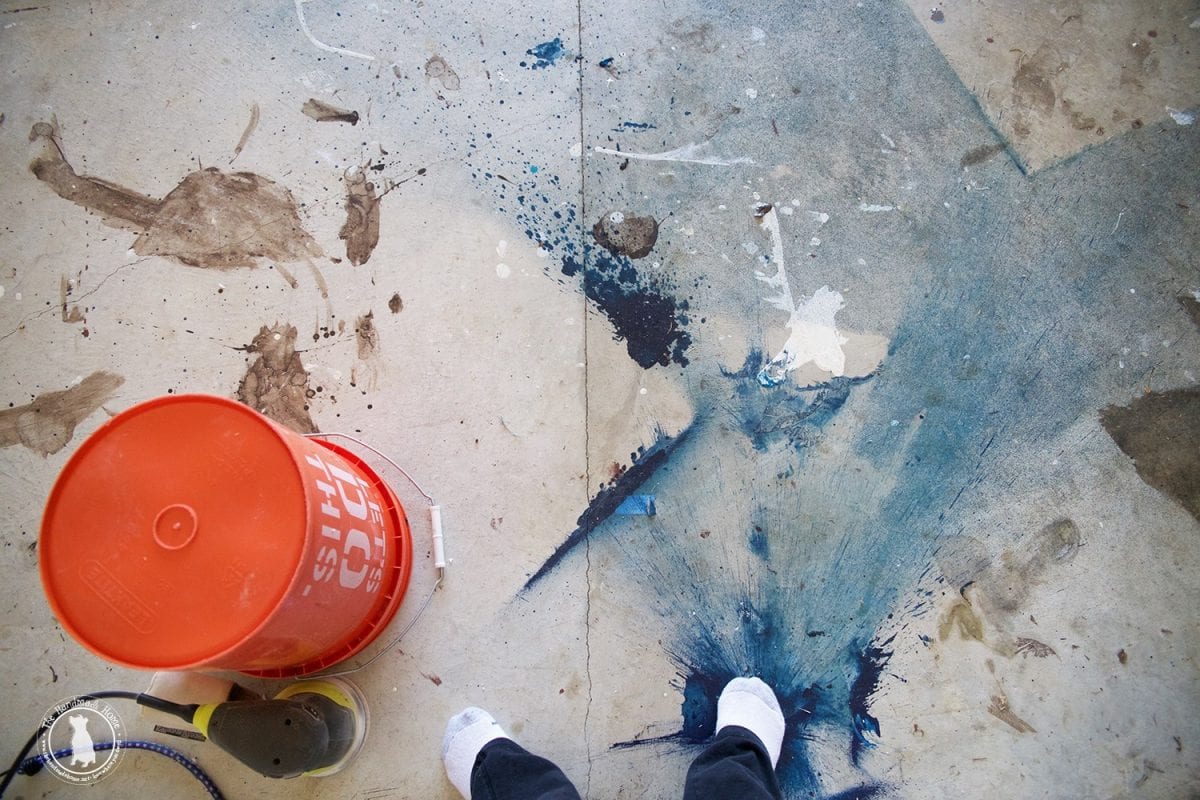 We refinished the outside last year, and just hadn’t touched the garage because we needed the inside to store all the creative things and tools. But it was now officially time for a redo. 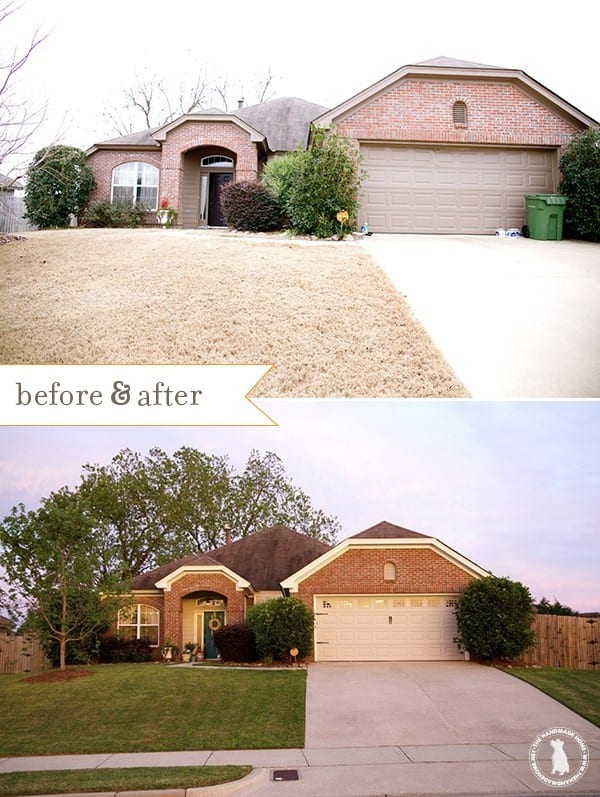 After being frustrated for about 2.5 seconds, we were thankful it wasn’t worse on the merchandise front beyond a few hundred dollars, and got to work. Between the spray paint and the old paint spills {shhhh no judging} it was time. So guess what?

Today, we’re going to share how to refinish your garage floor!

Which is surprisingly simple! 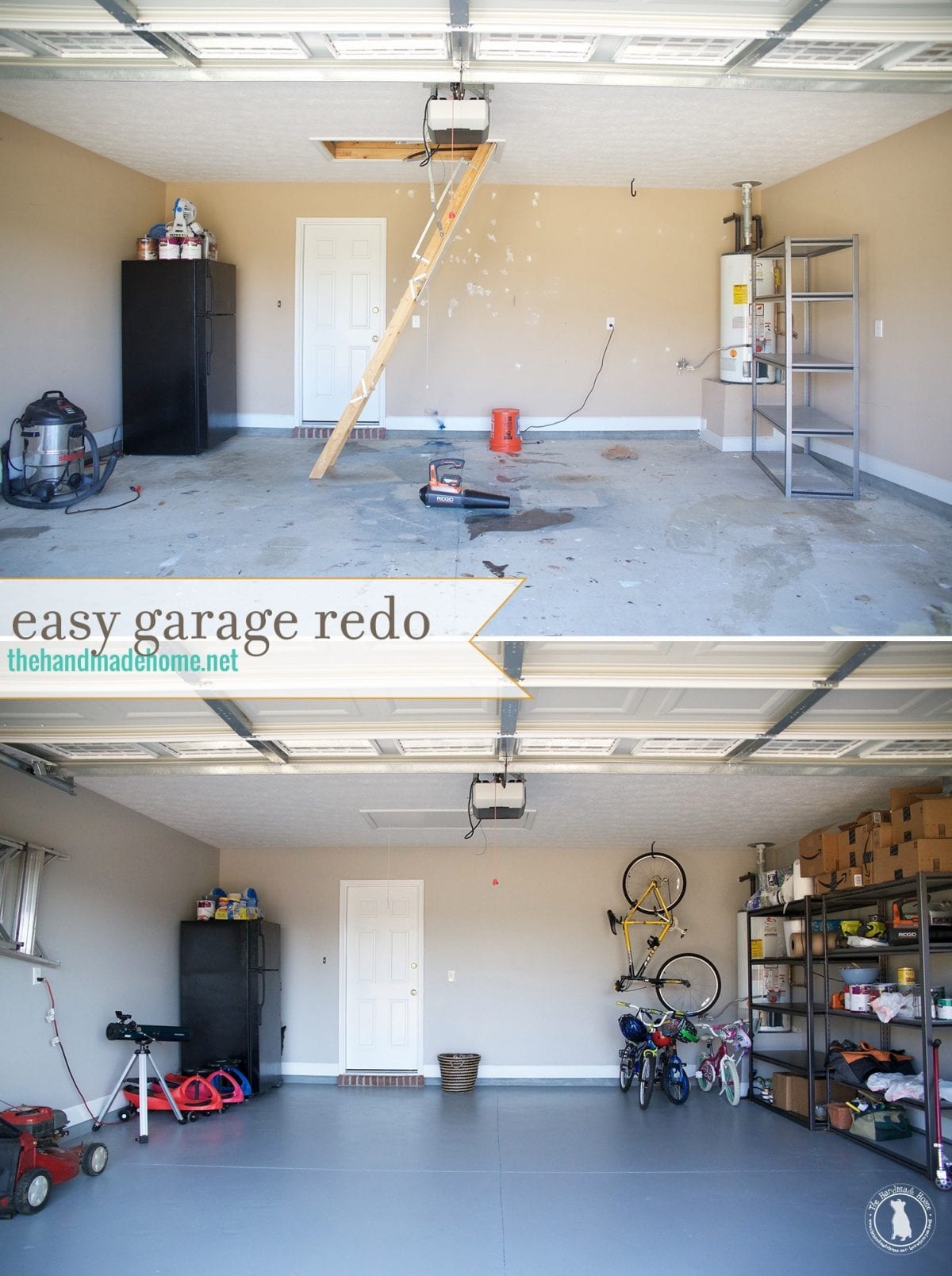 Via Jamin: There are a few options.

You can purchase one of the all inclusive kits, or you can purchase everything individually. In this case, we found that buying all the products individually was a little cheaper and easier for our space, but the kit might work better for your space… so explore both options. 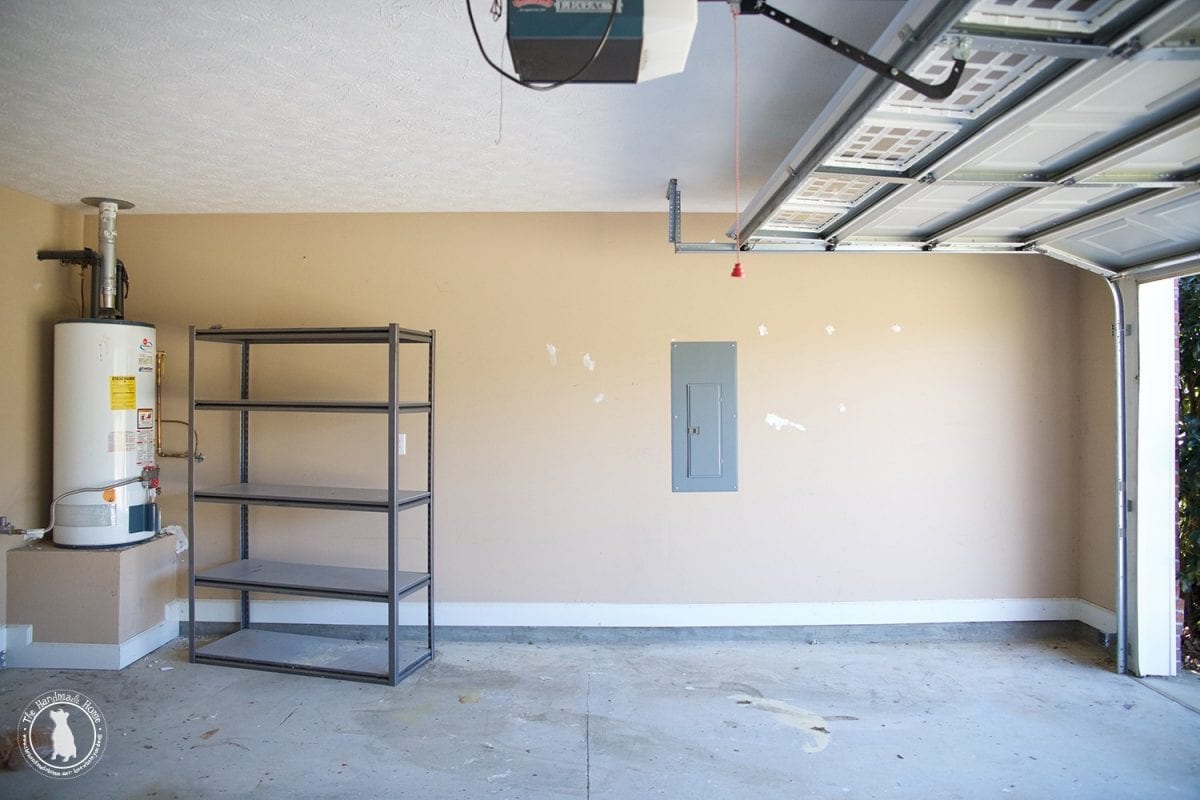 Once you decide on your colors, the first thing you will need to do is clean out the space. We really think this might be the hardest part of the entire project. We patched the walls once the space was cleaned out. We also sanded, swept and cleaned the walls. Then we swept and vacuumed the floor really well. We also recommend a good pressure washing. 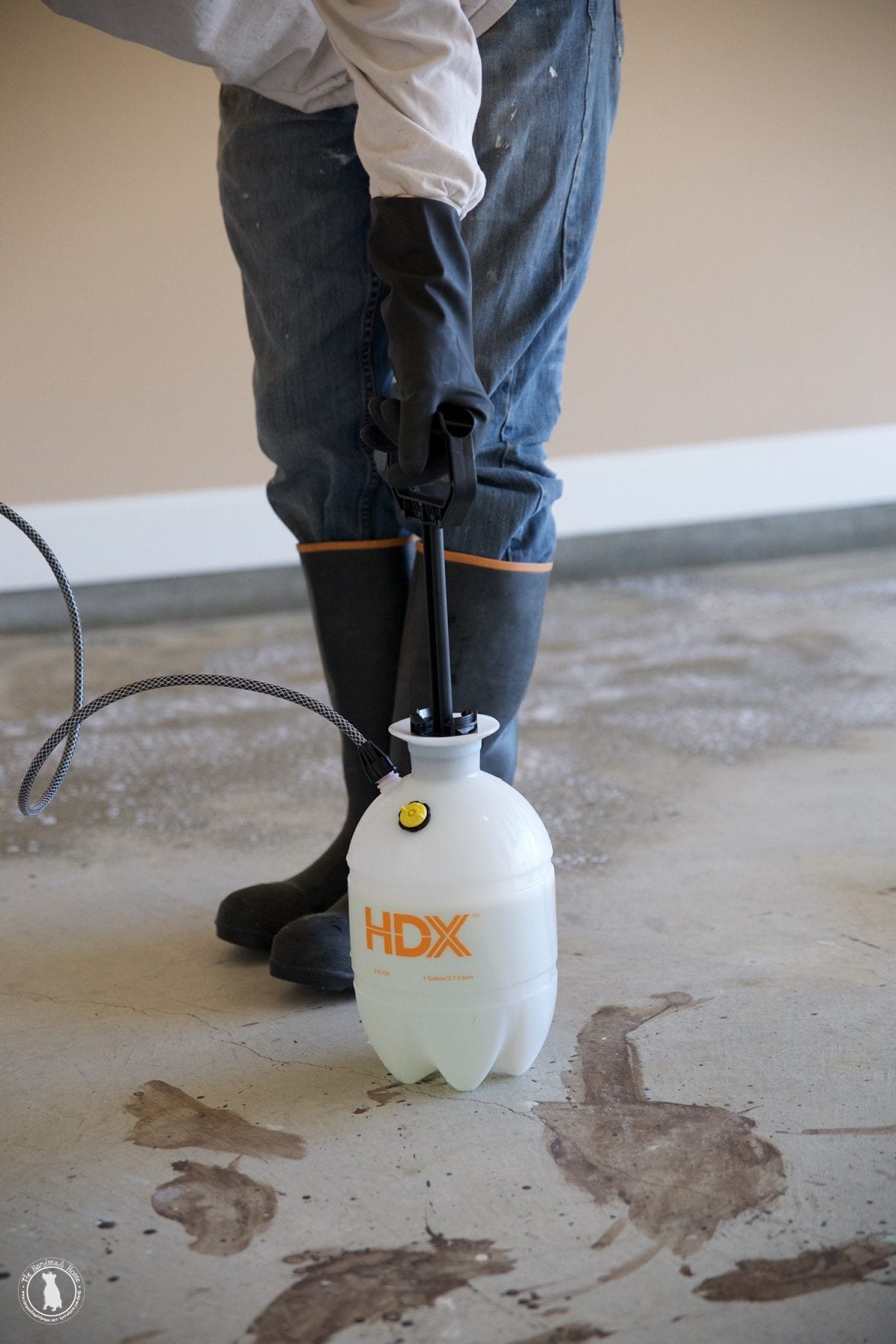 To etch the floor- which is essential in getting the paint to stick- follow all the directions on the packaging. Be sure to wear all recommended safety gear as well.

We suited up with our rubber boots, rubber gloves, eye protection, long pants and shirts. Using a sprayer, we mixed the solution according to the packaging, started in one corner and worked our way out of the garage in sections.

We also scrubbed ours with a heavy bristle brush to help the etching process.

Again follow the directions on the product and after waiting the appropriate time, wash it clean and let it dry. 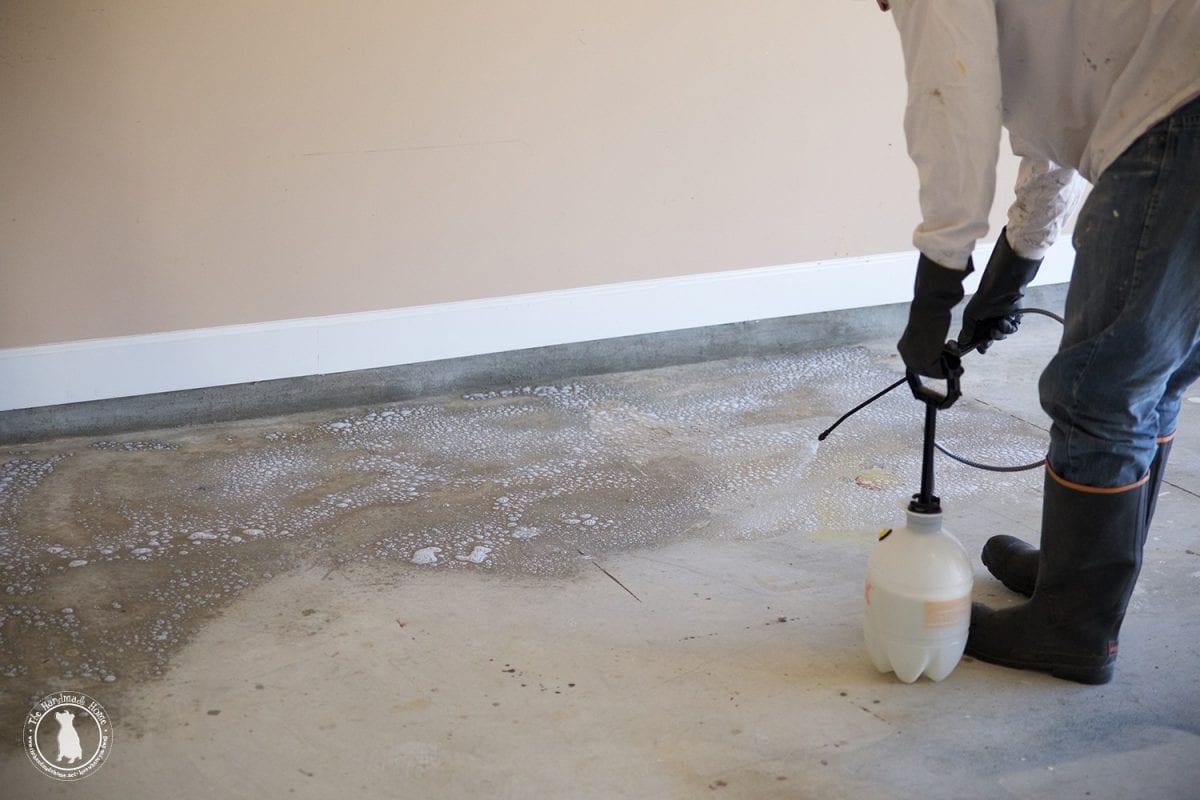 (Side note: We had a specific time frame that we need to get stuff back on the floor. And with the cure time for the product, we opted to do the floor first and paint the walls last. Bye builder’s beige. If you have the time, doing the walls first would save you time of having to touch up the floor or protect it.) 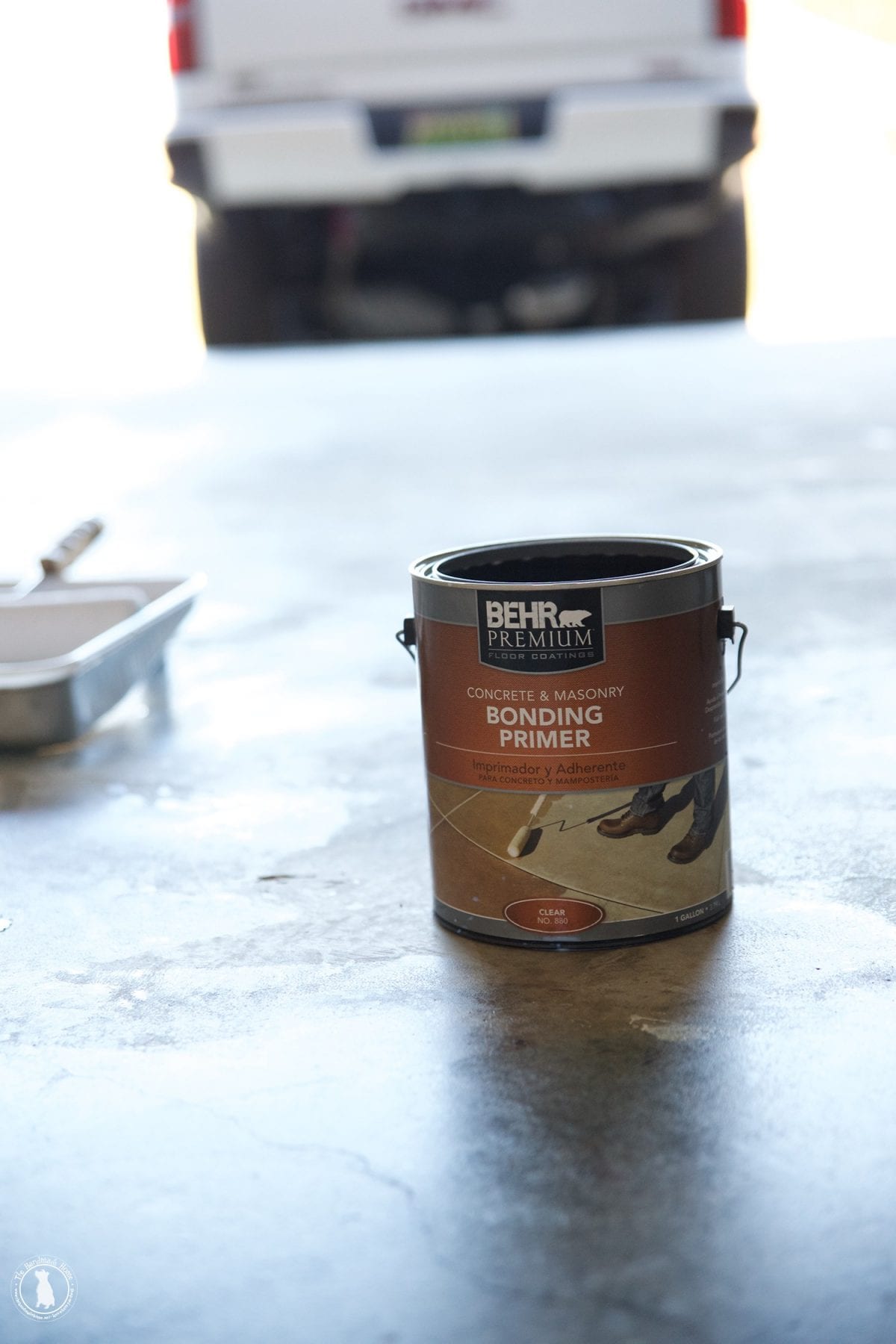 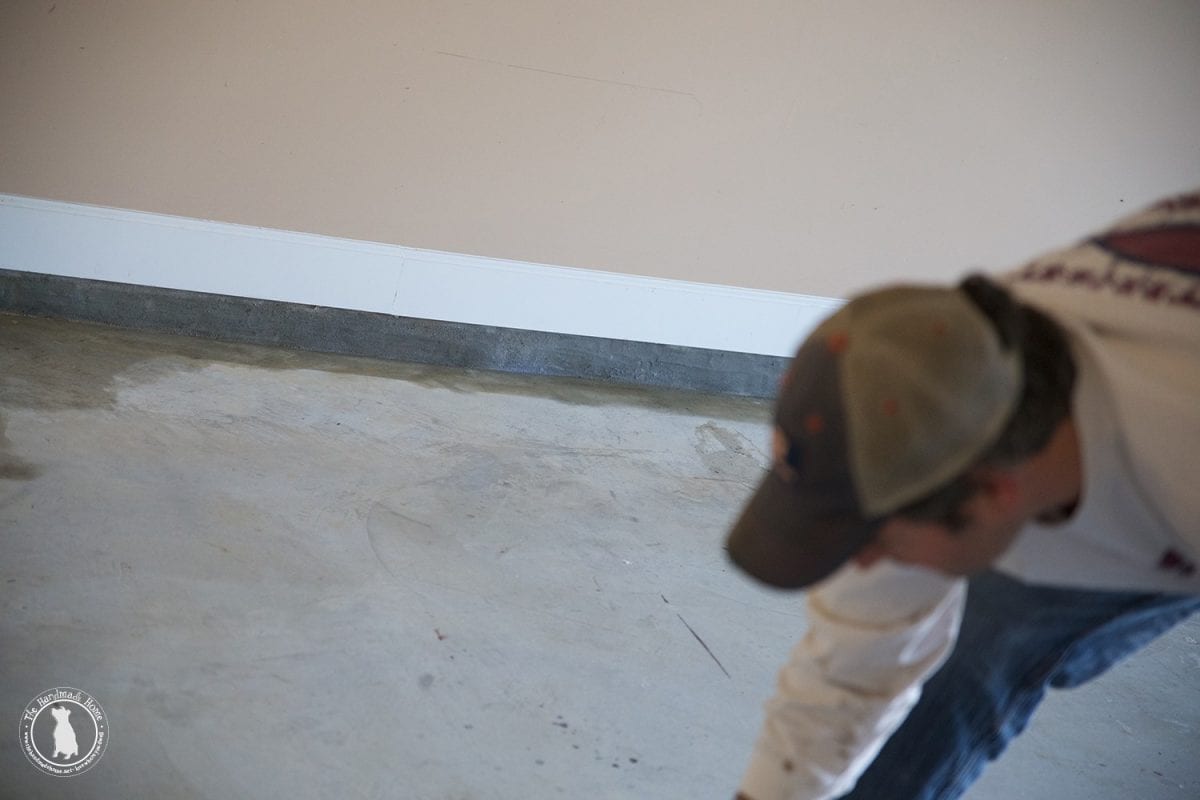 We started with the bonding primer by edging out the garage to make it easier to roll. We also decided to paint the concrete going up the wall to give a continued look. 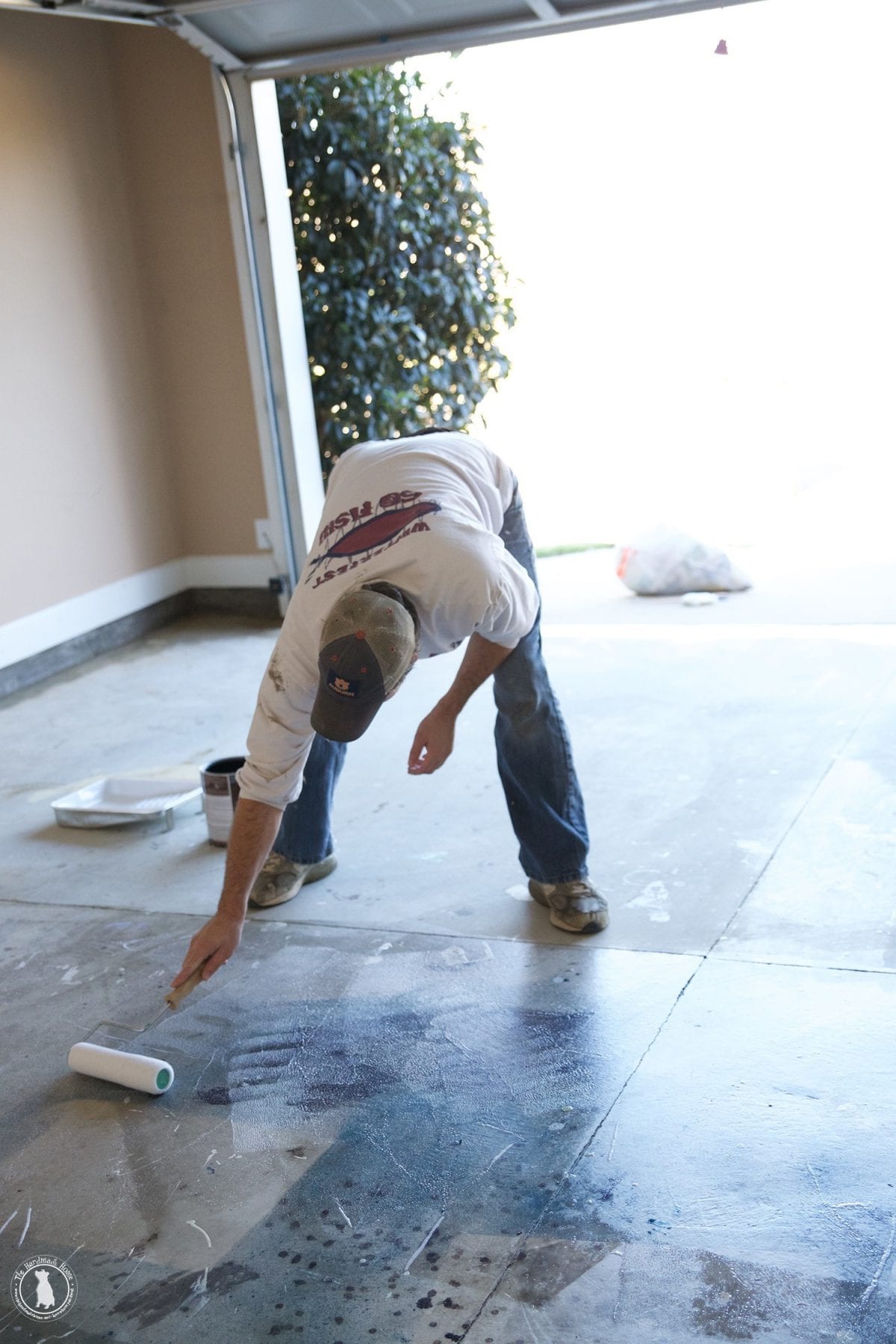 Then, using a pan and roller, simply roll out the bonding primer on to the floor and allow it to dry according to the directions. This is typically 4-8 hours depending on weather. We added two coats of primer for good measure. 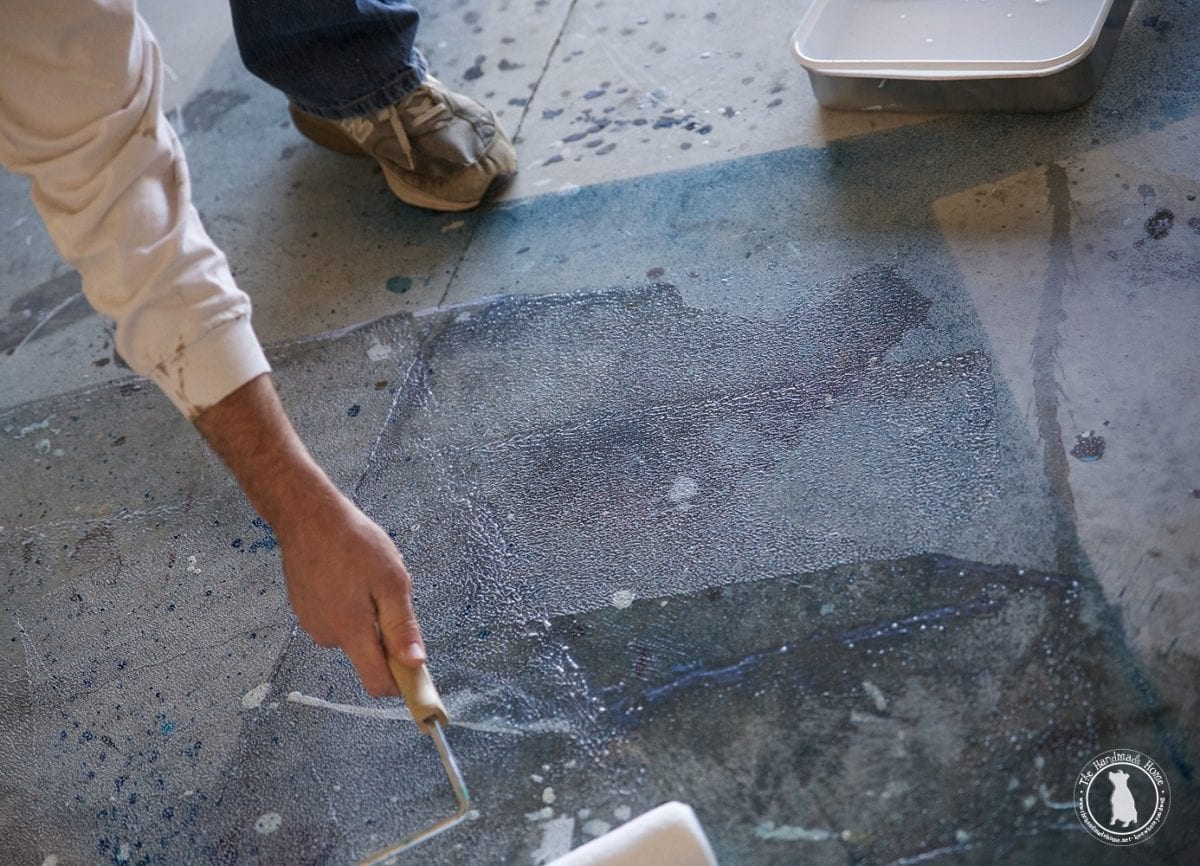 Once the bonding primer is dry, simply repeat the process with your concrete paint. I would suggest at least two coats here and it’s always a good idea to mix the cans together to make sure the paint is identical. 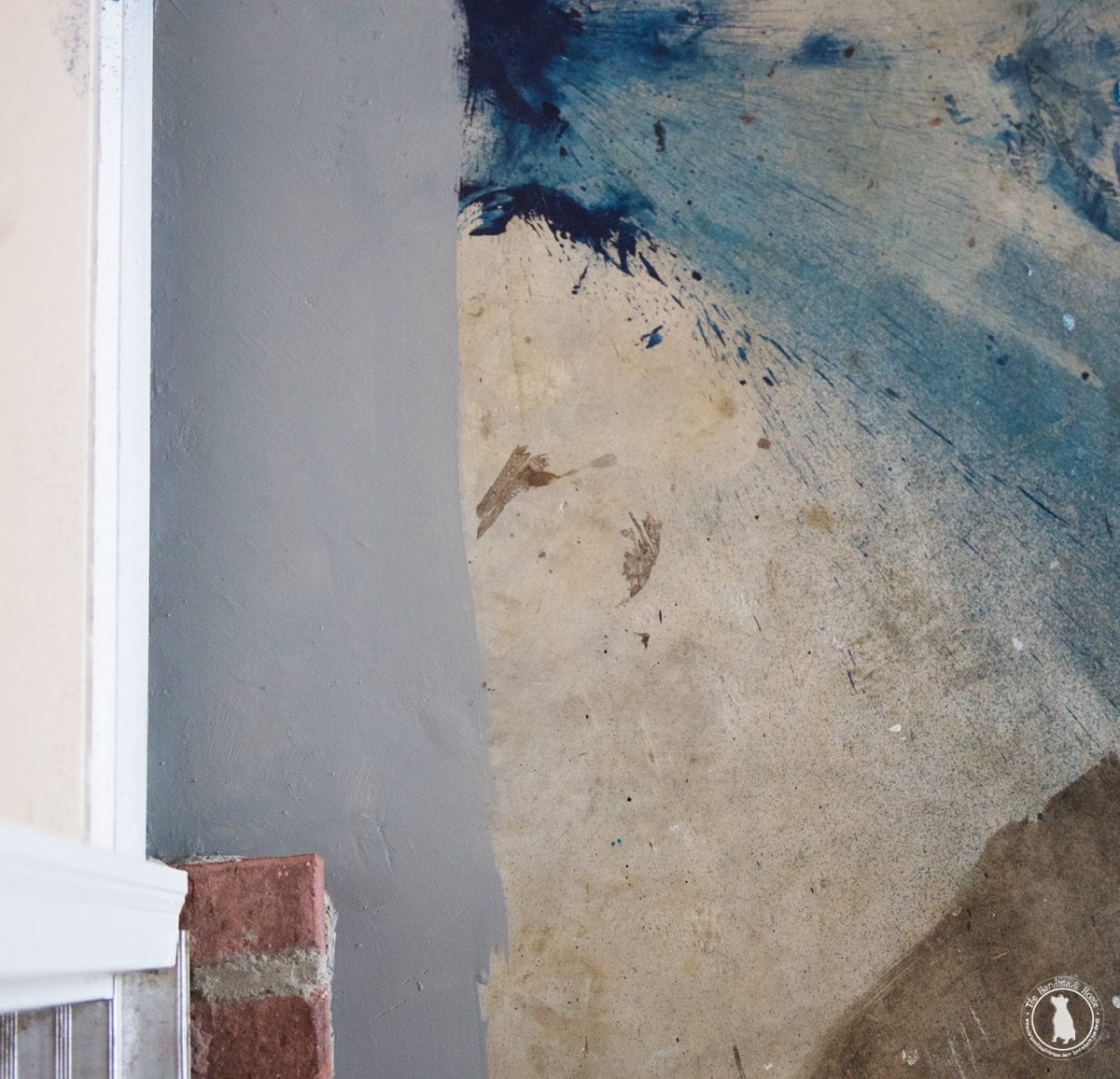 Don’t forget to start in a corner and work your way out of the garage, you don’t want to get stuck in there for 24 hours.

Most products suggest 72 hours before moving things back on the floor, but you’re safe to walk on it after 24 hours. 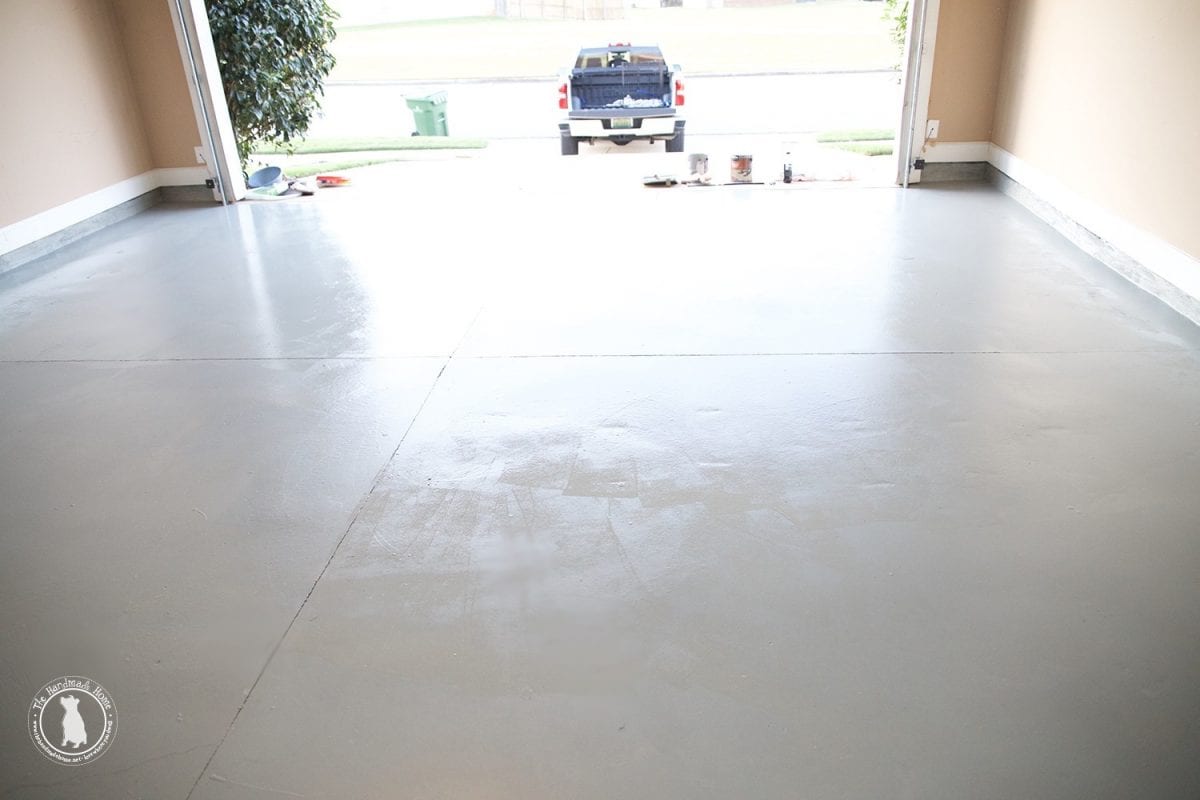 After our 24 hour period, we began painting the walls. Touching up any paint that got on the new floor was super simple. 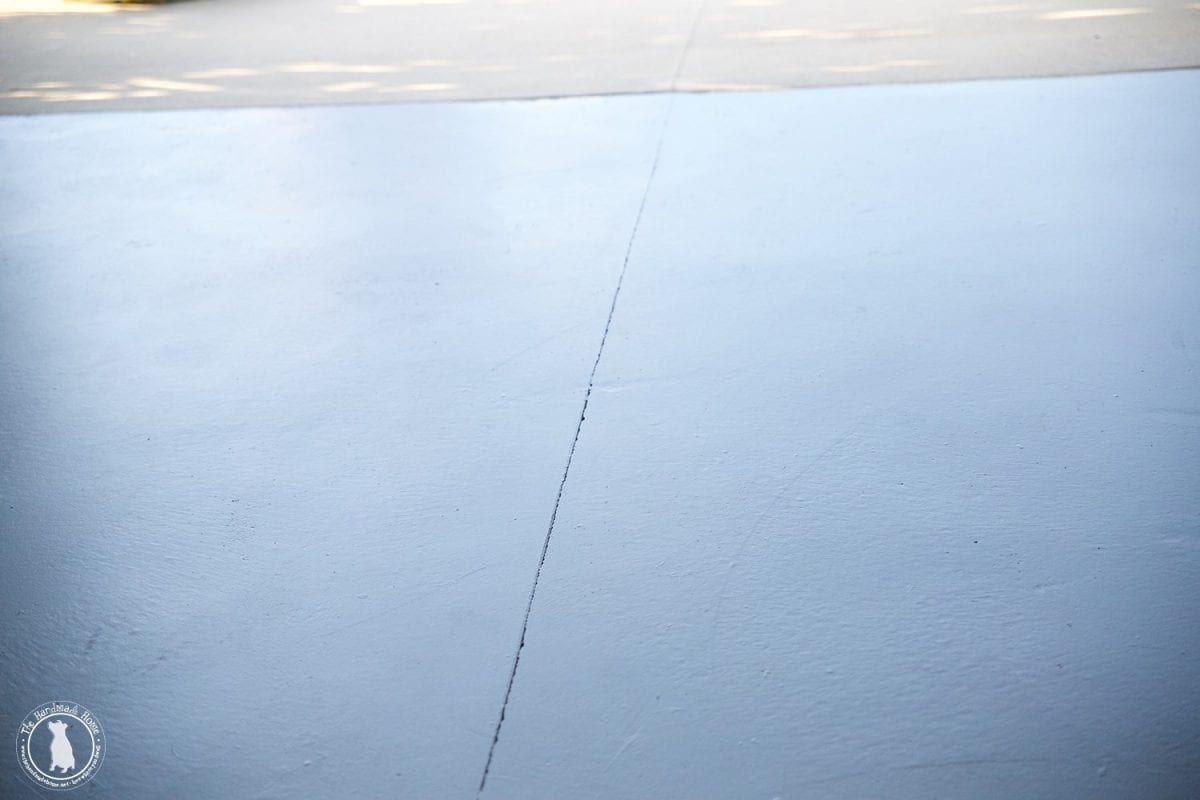 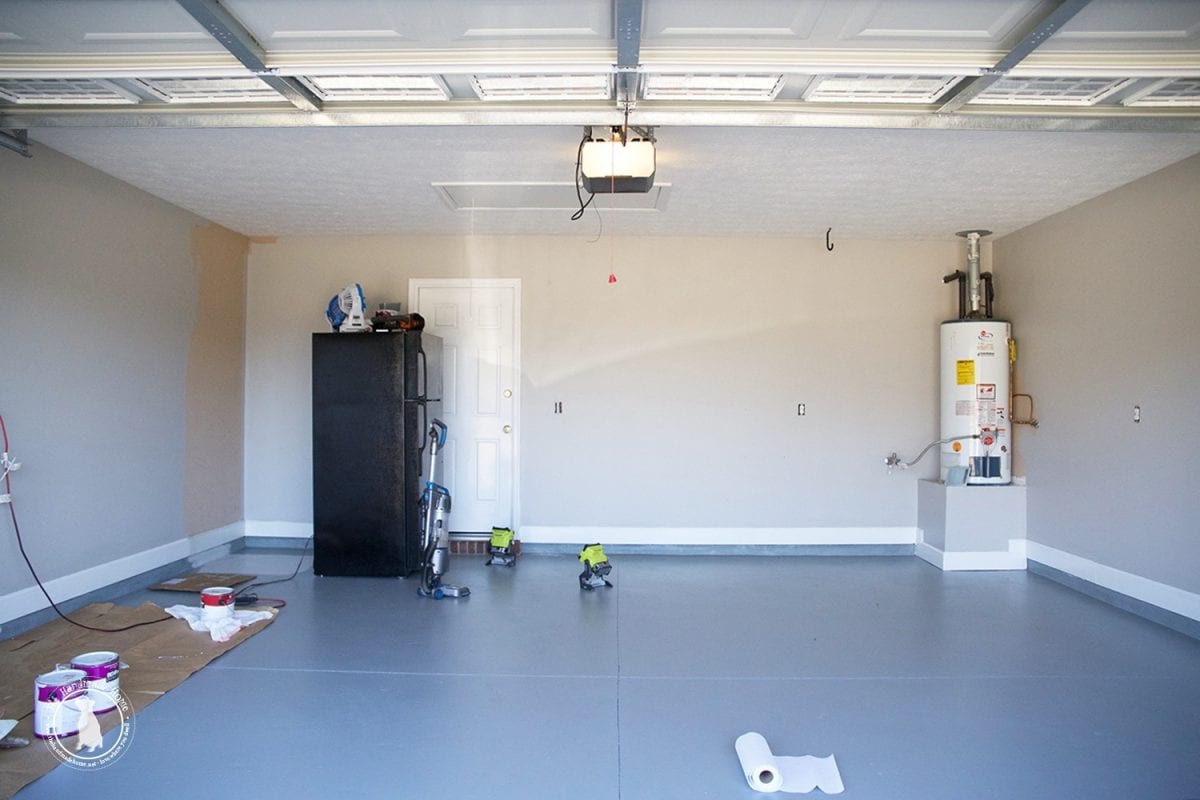 Which we didn’t do much of, since our house is on the market. {Cue hysterical face emoji} 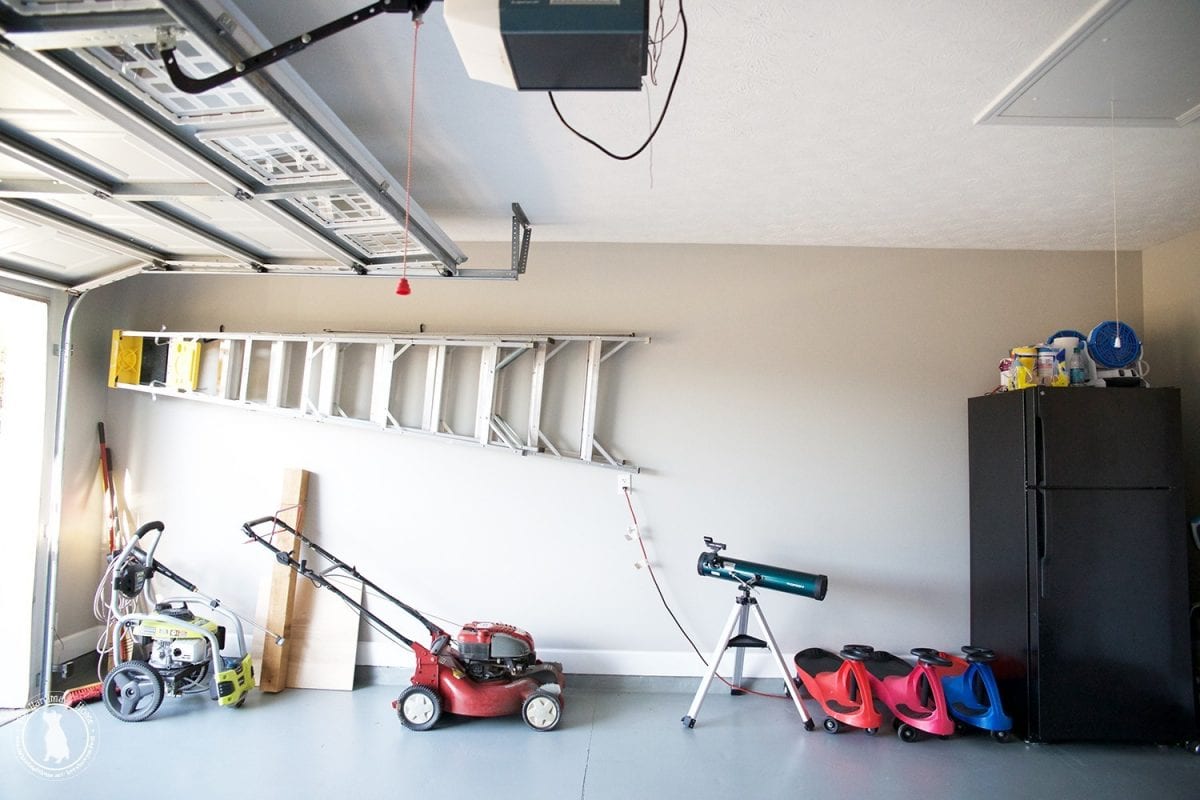 But dangit, our garage looks awesome. 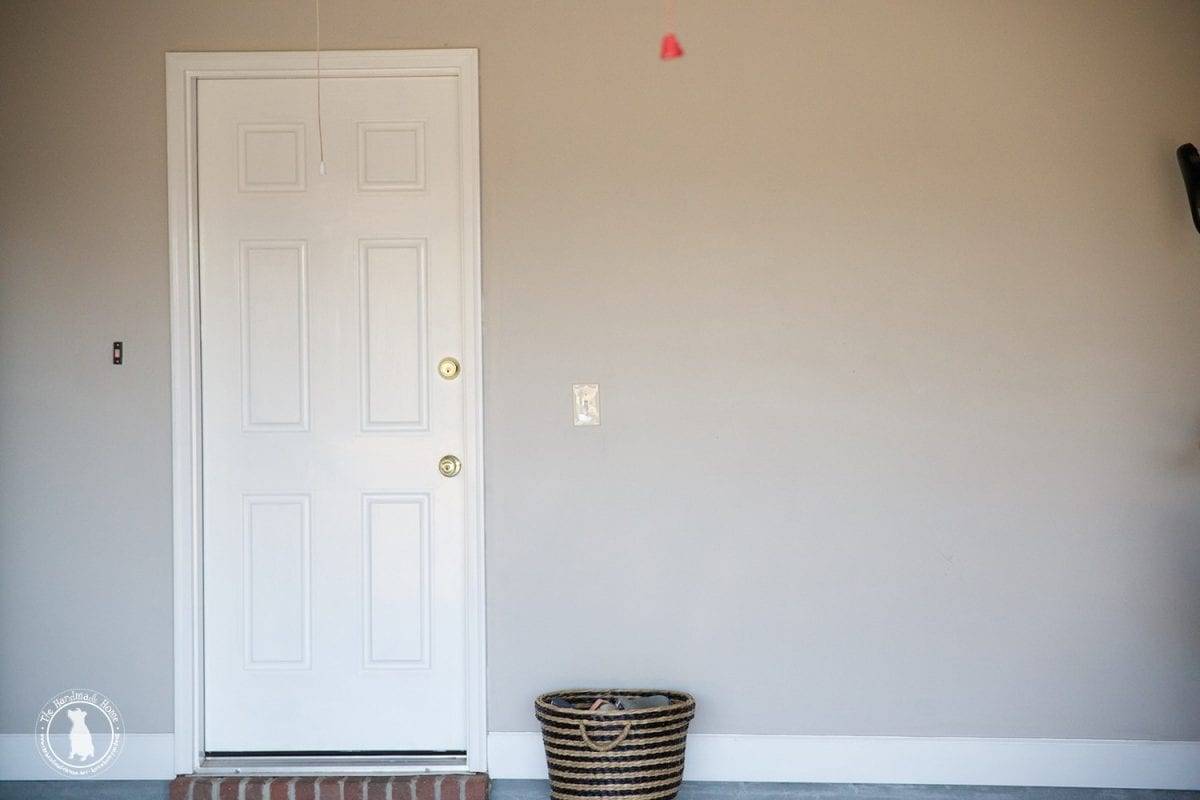 I know this isn’t really the season for outdoor stuff, or garage improvements… but ya gotta do what ya gotta do. And it was so worth it.

As always, let us know if you try it. Finally, our garage is super easy on the eyes!

Sometimes, catastrophes can have a happy ending. {See beercanmoldpocalypse}