You are here: Home / confessions / that’s not chocolate. 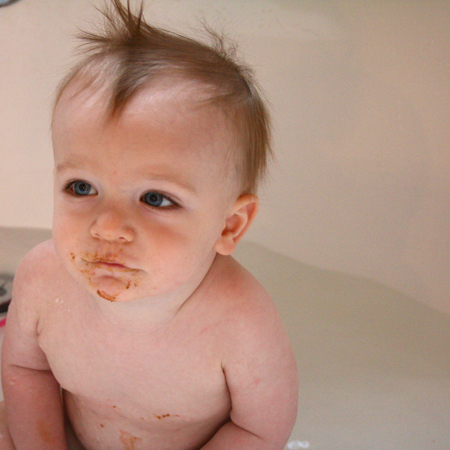 We scored a family-wide nap on Sunday afternoon. PURE. BLISS, I tell you. I NEVER get naps anymore.

I try with the whole daily coordinated-nap-afternoon-grand-event-of-heavenly-fabulousness, but they kinda really don’t happen much anymore. I lay all three down, and JUST when I think I’m on the home stretch, rounding the corner to my happy place of oblivion, I open my eyes with a start. Aiden is standing over me with a knife toy, making grand proclamations that he “can’t sleep” and he “doesn’t need a nap” and “he wants something to drink” or “has to go potty” or “wants to have a caring/loving/bonding conversation with me” and I’m all, resisting the urge to throw a pillow at his face so hard that he lands on his butt, and then pretend he’s not there, rolling over to pull the covers over my head after I hear him hit the floor.

Don’t judge me. I’m the victim here. It’s quite cruel, really, to get my hopes up. Don’t they know how badly I need this? I’m like a crack addict getting her fix. Once I get Aiden knocked out settled in, Emerson makes her grand appearance, asking if she can sleep in mommy’s bed, which usually results in standing on her head and bouncing up and down, snickers and giggles, trying to carry on conversations, and other ridiculous whatnots. {I don’t want a relationship right now, kid. I want to sleep.} They basically step on my face while I doze. So, I really don’t try anymore.

Not the ideal situation.

What is, in parenting?

But we ALL scored some mega nap time today. I woke, feeling quite refreshed. This topped off a wonderful weekend for me. AHHHH…

And then Aiden awoke, screaming bloody murder when he rose from his hibernative state. “MALONE HAD DIARRHEA ALL OVER THE PLACE!”

Aiden tends to be a bit dramatic. I’m not really sure WHERE on earth he could EVER have gotten THAT from. {He’s special like that.} But he isn’t too keen on waking up with someone who routinely poops his pants and stinks up his room. Poor kid’s a real trooper. So I took my time, still in my sleeping stupor, to check out the situation. I figured I just needed to change his diaper.

What lay before me, was a crime scene. From a horror movie. For germaphobes. I needed to burn down the entire room and start all over again and I wanted to return my poo covered child to the place from whenst (is that a word?) he came. I simply didn’t know where to begin. It was as if Malone had gone mudding. But he wasn’t covered in mud.  Hand prints. Smears. Piles. Mounds. MASSIVE AMOUNTS OF BODILY DEFECATION. Have you ever tried to clean POOP from a spindle bed? Do you KNOW how many CREVICES there ARE? And that crusted stuff around his mouth…was. not. chocolate.

I simply took Malone and held him at arm’s length. Carried him straight to the bathtub as I woke Jamin with a siren-esque public poo announcement. He jumped out of bed like an officer off duty. I found the pacie Malone had had in his mouth. And promptly threw it away.

And his DIAPER. His DIAPER was completely new. Untouched. As if he pulled it off and decided to play with whatever came out next. Oh the fun he must have had! {I’m going to go with the whole angle of the fact that he’s a curious child, therefore intelligent. And creative. Poo sculptures=Prodigy. (Not the unfortunate alternative of dim witted poo eater.)} You’ll see, world. You’ll see. Malone the artist will have his first showing at the Louvre. And I can include that picture as his profile pic underneath his life’s work.

As Jamin bathed Malone, and I took care of the carnage, Aiden and Emerson ventured curiously from the bathroom to the boy’s bedroom to witness the clean freak’s worst nightmare. Emmy asked what happened. Jamin explained the precarious situation to our little mama. She responded with an “Oh. My. GOODNESS.” {Pause} “You’re in BIG trouble, MISTER!” Malone burped, and Aiden announced {joyfully} that he was full from eating all his poo.