You are here: Home / for the home / the basement

So, this is basically part 4. {Backstory with more links into our crazy adventure/main living plans/the cesspool/upstairs plans}

pssst- to see the final reveal of it all, check it out here!

“The Basement” Could basically be a clever scary book turned movie in which I could make millions with a main character like Norman Bates from Psycho meets Annie Wilkes from Misery with that clown from It thrown in for good measure who comes out of the crawlspace at night. Because this is the scariest part of this entire house. The ending would end all weird and vague like the witch movie that I can no longer be bothered to google that I saw on an awkward date with a guy who I thought was ‘just my friend’ in college. Turns out, it was actually a date so thus the awkwardness. Anyway, if I remember correctly, they’re capturing it on their camera, and everyone is standing in the corner and sticks are hanging from the ceiling and that’s how it ends. Because duh, sequels.

Once upon a time, I watched scary movies like they were going out of style. And it hit me somewhere in my late twenties that I have real fears like laundry and stomach bugs where kids vomit everywhere alternating on schedule and sometimes simultaneously because that actually happens. And grammatical errors and hashtag aintnobodygottimeforfreddykrueger. Or the lost sleep that ensues from watching said movie. And instead of the casting call of psycho characters, it’s two unassuming dorks like us who see the potential past the weird floor stains and bad smell/totally sketch crawlspace.

End scene one, because we’re the suckers who purchased the house and clearly, I can’t get past the crawlspace. Because if there was ever an adequate before photo for the whole shindig, it’s this. This horribly dark photo pretty much captures what’s down there. The end. 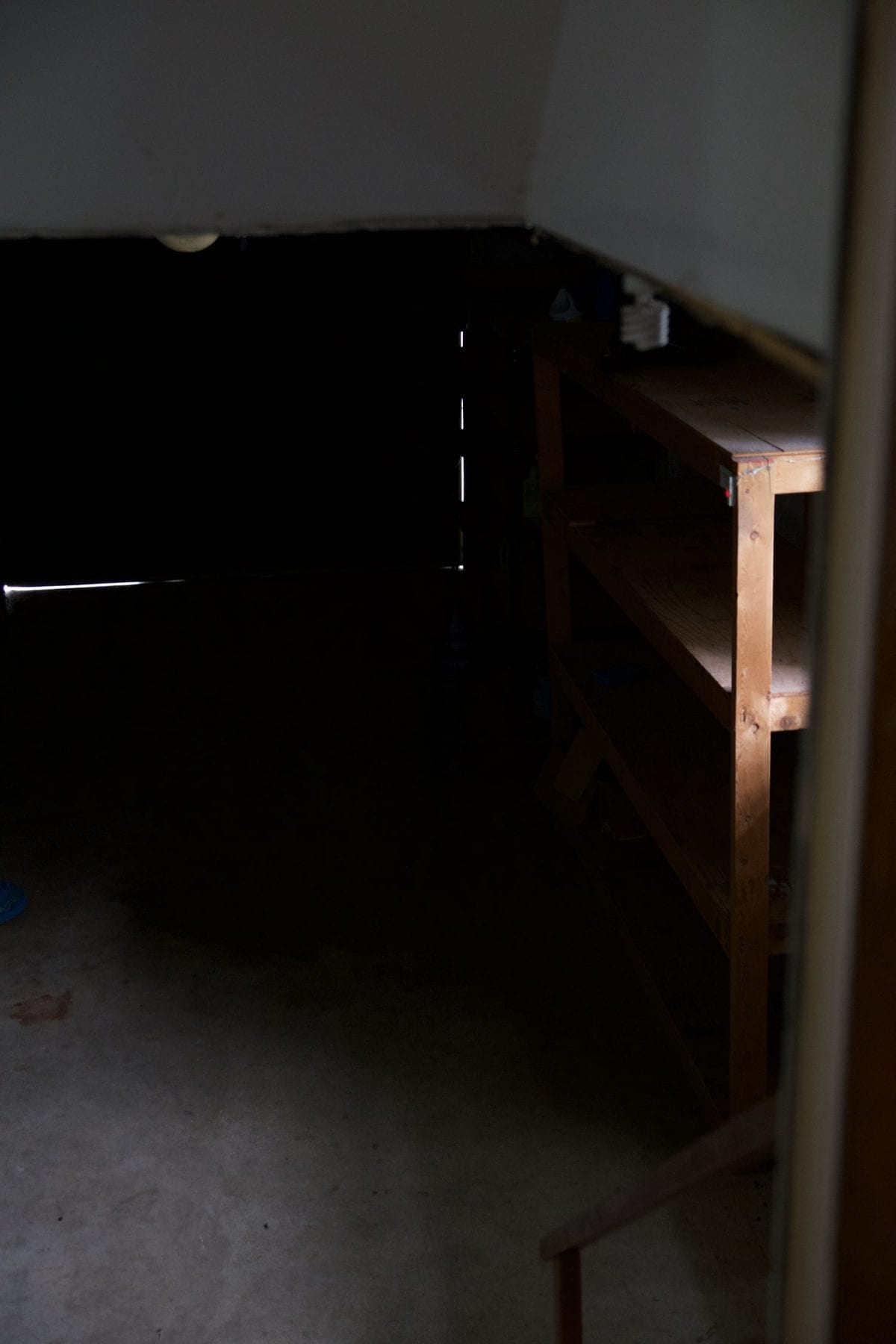 Can’t you see the potential?! Isn’t it gloriously surreal and other obnoxious I-bought-this-house now-watch-my-trainwreck phrases?

We’re so ‘all in’ at this point, that if when tearing down the walls a body fell out, I would keep going after calling the appropriate authorities. {And asking for a refund from previous owner} I know that’s not how it works, but it’s what I’m telling myself in case a skeleton really does pop out of the pool.

Luckily for my children I don’t tell them what I’m actually thinking because they inherited that overactive imagination from me and it’s one thing I won’t traumatize them with. Instead, I mutter things like, Just remember our old house and know that this will be past that level of things you love. I PROMISE. 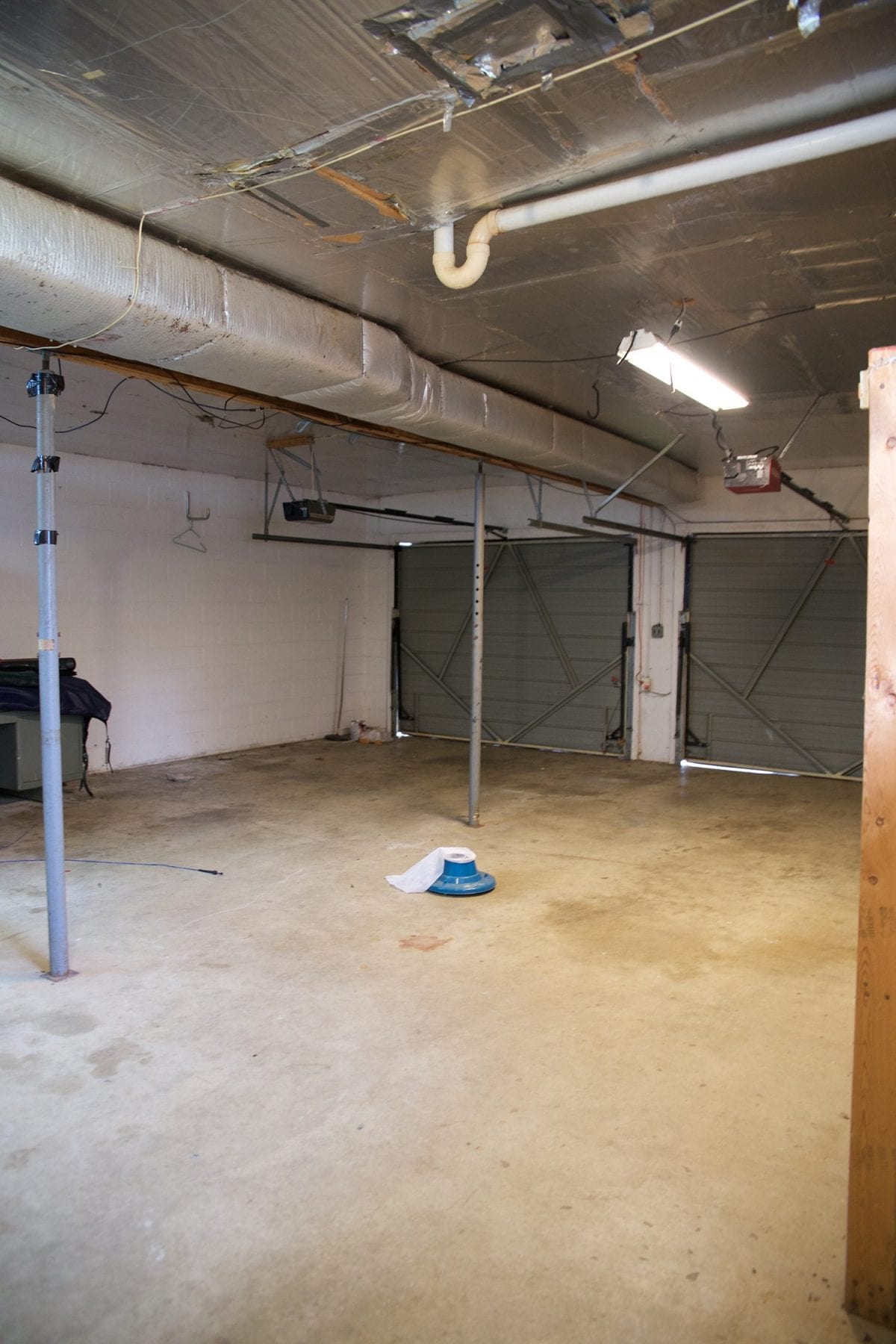 But we all know that basically, that’s for me because the other day we were cleaning out the storage shed and I looked at Jamin who had two dead brown recluse spiders hanging off his baseball cap from the fogging we’d just completed and said, “Did we really just buy this?” The psyche is affected when one is still waiting on inspections. Yes, we’re still waiting on that inspection before we begin. And for the brown recluses to die. Seriously.

So here it is when you actually turn on the lights. A barrage of bad lighting, wiring, and things we inherited not-so-willingly from a past owner who just couldn’t be bothered to move crap. 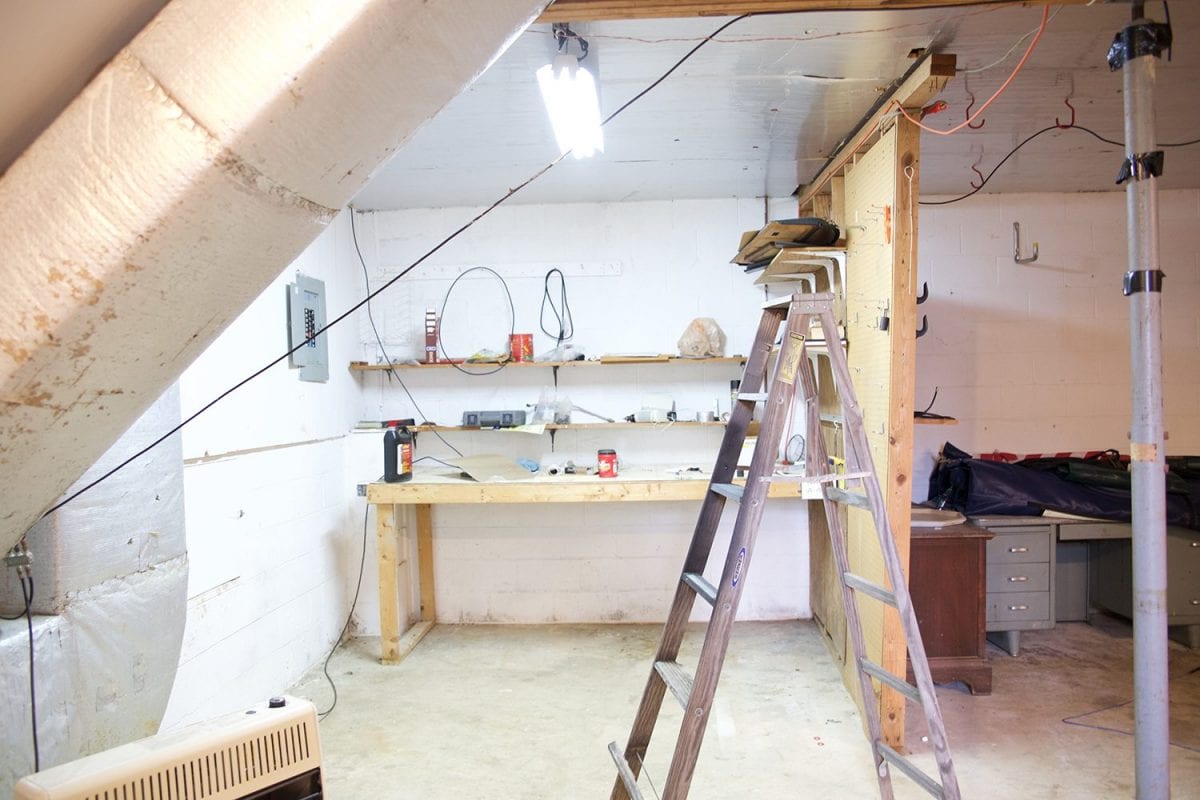 We’re basically waiting for the dumpster to show up so we can heave it all in there. But I am contemplating saving that giant metal desk because it has potential. But also aintnobodygottimeforthat either. No, I will never ever stop using that phrase, especially as one big run on word. Kimberly Wilkins is my hero.

But back to the desk: Anyone know what kind it is or what it’s called or where I might find a missing handle? This is what I do instead of googling. I ask you things because someone knows. Wait for it… 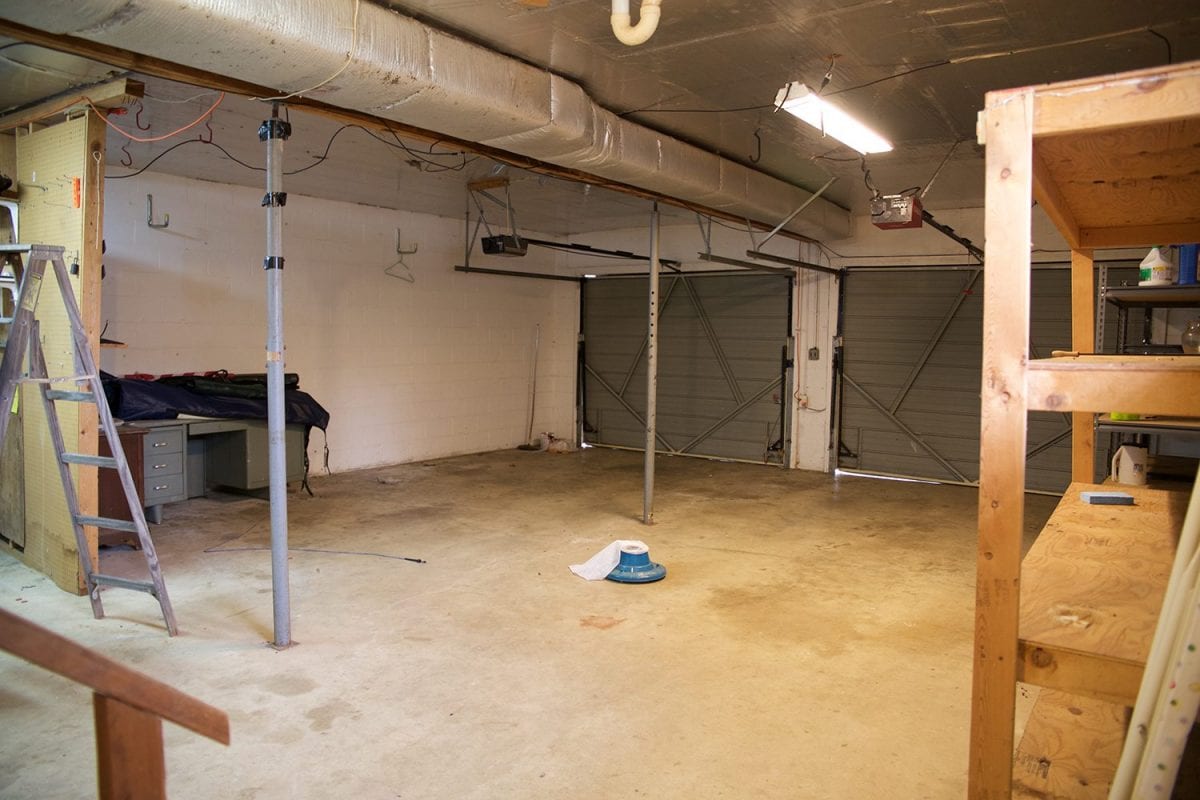 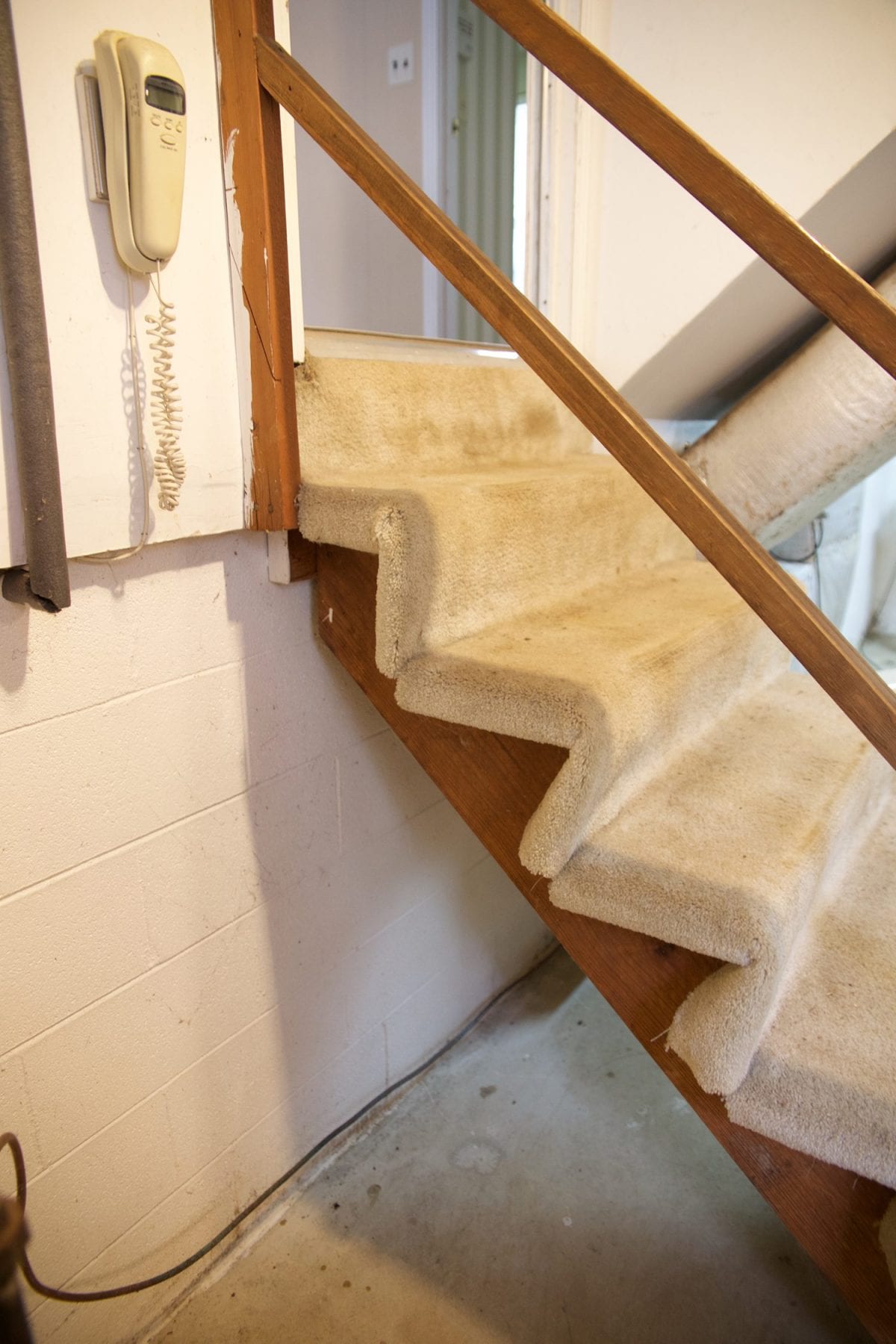 So as you can see, once completed, we will have plenty of square footage in this house. We plan to redo/clean out and reseal all the insulation, remove the bad wiring, and replace those garage doors which are total death traps. I’m pretty sure those were in Scream 6 or something where people are running and then smushed in the door. Because that makes us nervous with children. There is no safety reversal thingy on those doors. They’re all BAM you’re DEAD. Instead, they’ll be replaced with some big fat pretty windows to give the basement a not-so-scary feel. 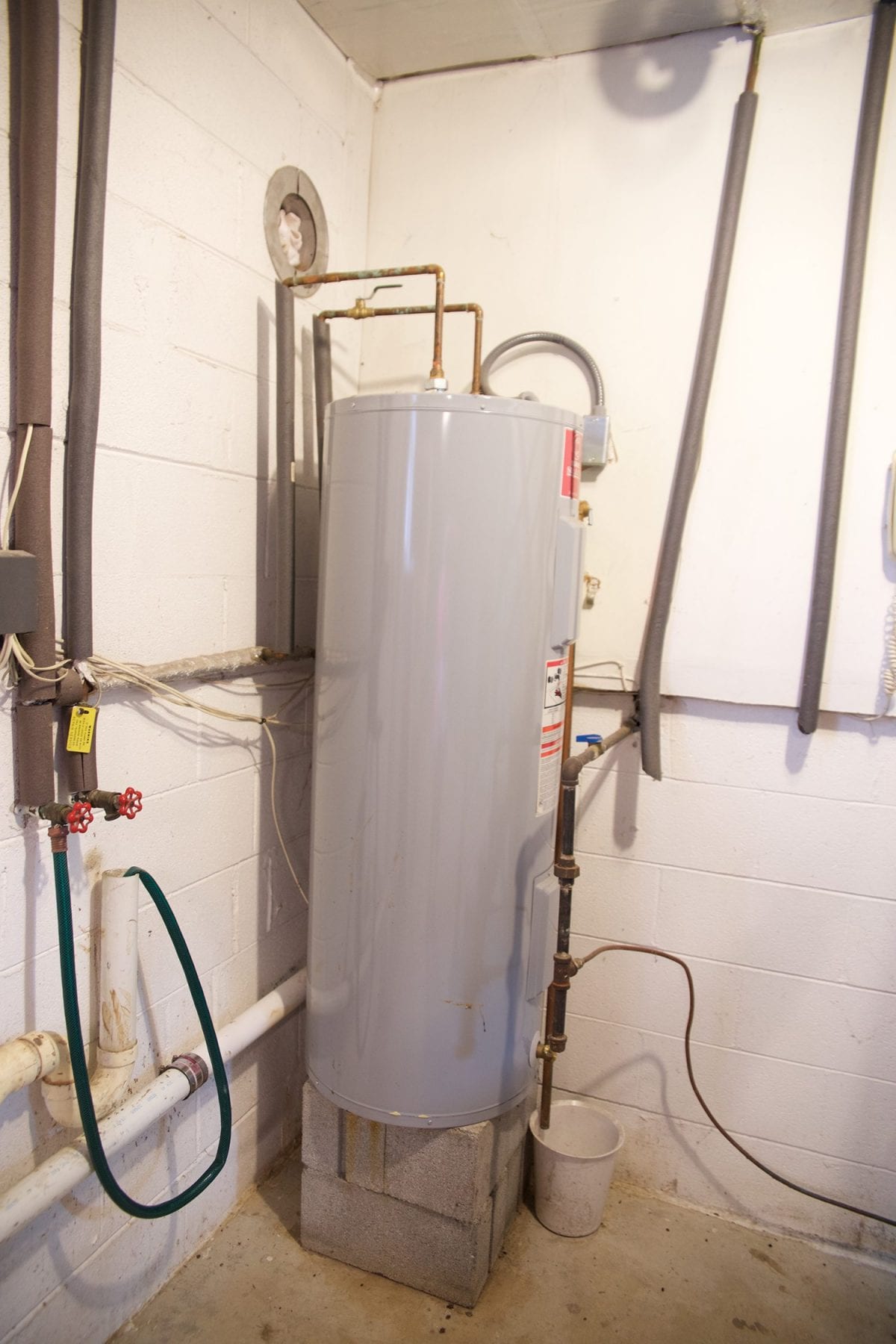 Also, things like the stairs will be brought up to code, and adequate lighting added. And I’m pretty sure more brown recluses will die. And those sketchy pipes have got to go.

Drywall and flooring, here we come. 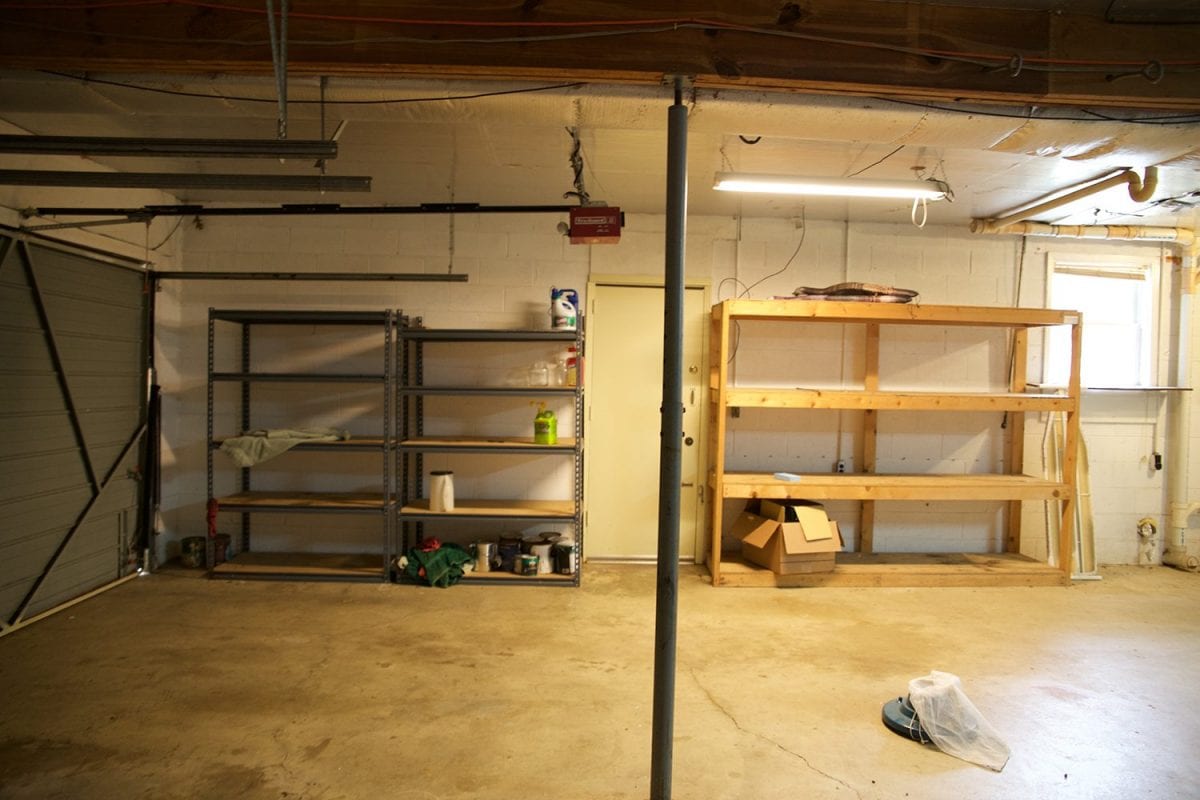 This particular door is also going, as one will be beside the windows for the main exit and entry into the house. We plan to add a separate garage {think modern carriage house style} down the line, since we do have some space on the land. We may be whipping this puppy into shape with our initial overhaul, but we have projects for years to come, y’all. So here’s what we have now… 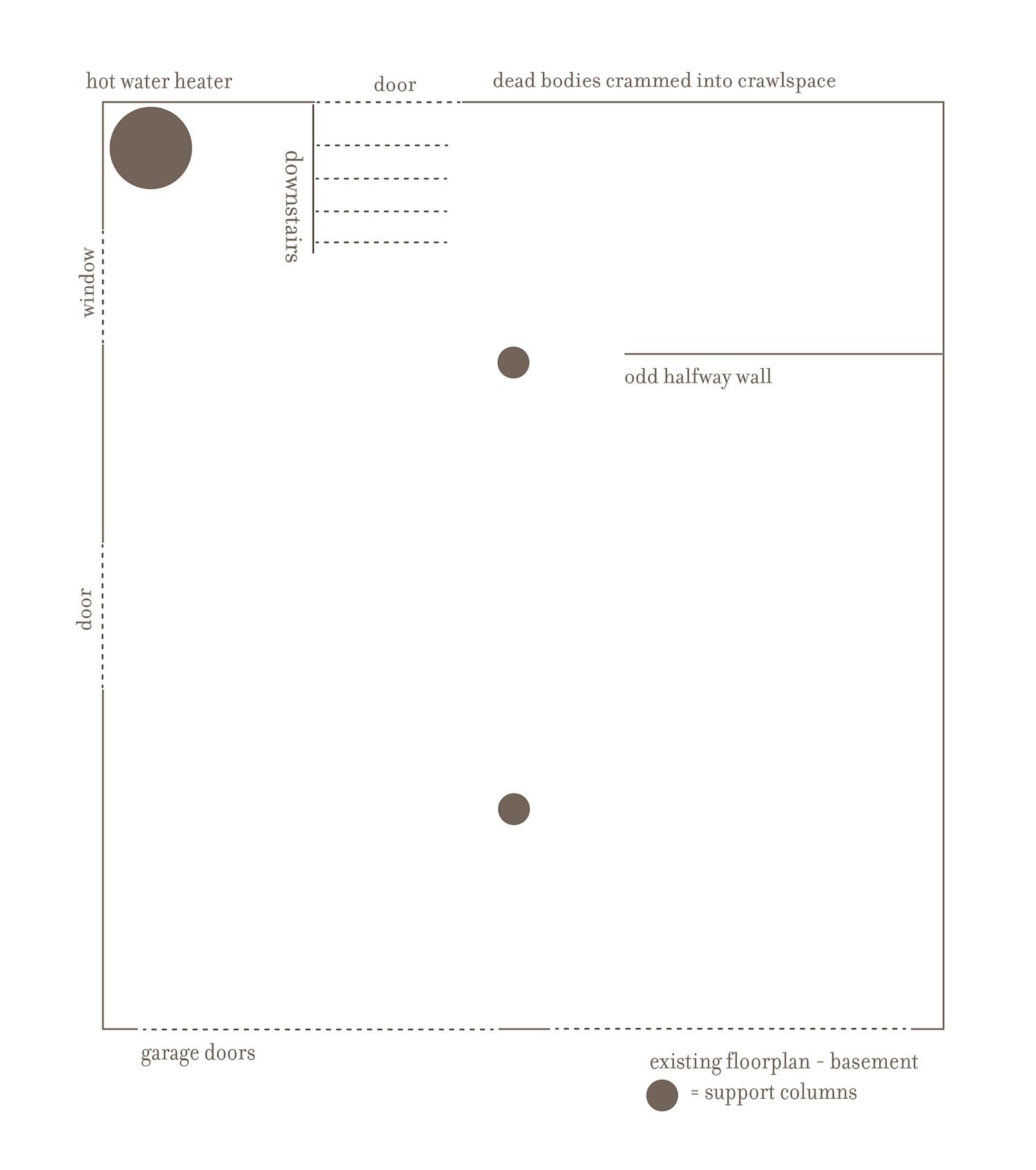 And here’s what we plan on doing:

This will probably be the hardest working space in the entire house.

As we mentioned in our upstairs post, between the pool and the basement, we want this to be an area where the kids will be when they’re teens. But this space also has a lot of jobs.

The entire space will need drywall, and flooring.

If you read our past posts {linked above} you probably realize there isn’t a laundry room, or much storage in the house. So, we plan on adding a wall to really meet our needs and build out, instead. We plan to go with a tankless heater to free up some much needed space in that corner. And we want to have our washer and dryer stacked this time, so that we can free up more space, as well.

We also hope to have more storage downstairs for odds and ends. And store our additional fridge for refreshments for the kids.

We hope to have a sliding door for that wall, so that we can make the space more open if we wish. And close it off when laundry is going and the kids want to watch a movie. Having the laundry and storage open aren’t an issue for us, as it was open in our last house as well. I’m a big believer in the whole know thyself mantra, this will keep me from stuffing all the things, while just keeping the essentials/making it attractive.

We hope for the space to also supply a built in area for entertainment and game storage. A study area for desks and homework where they may have a quiet retreat when needed. And a hall tree beside the main entry as this will be our main entrance in and out of the house.

This room will also probably be our main guest room when we have guests in town, so we hope to add a comfy sleeper sofa when needed.

Like we said, lots of jobs with a big list. But also, lots of potential. A bonus room on roids for all the elements the upper levels lack. 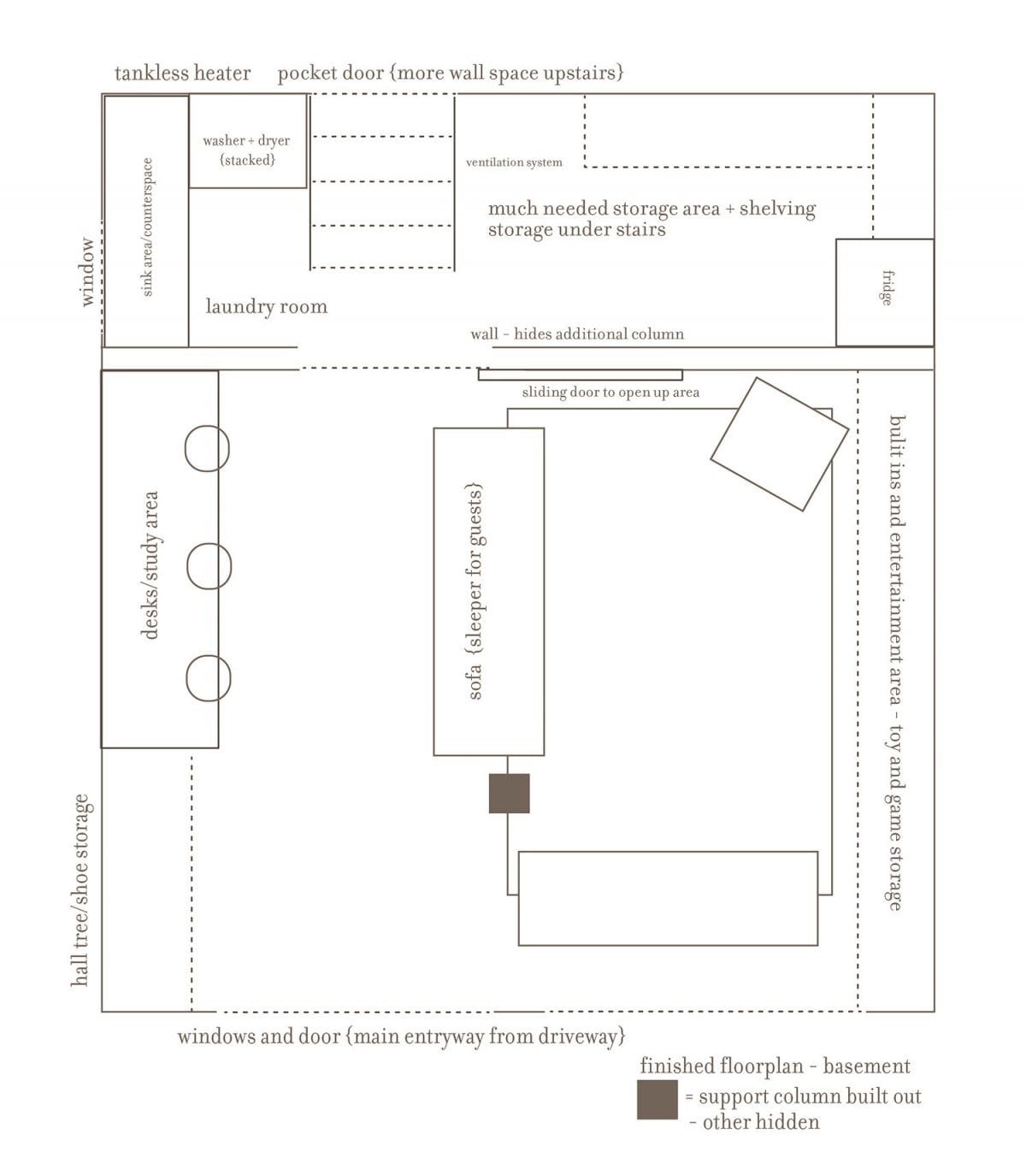 So these are our first set of initial plans for the basement area. We’re busy picking out finishes, and while we wrote that in the first post, we’re hoping demo actually starts THIS WEEK. FOR REAL THIS TIME. That’s me, yelling at the construction universe and all things code. And inspections. Let’s do this thing.

Have you guys ever gone through the rehab of a home? Hello projects and work and hello rewards! We love the idea of it all and infusing a little love into it as we go. What did you learn from it all? We’d love to hear from you!