You are here: Home / confessions / the curated life

I was on the phone with a very dear friend the other day, when she started telling me about this amazing woman she’d found on Instagram.

“This woman is incredible,” my friend went on to say. And she was truly awe-struck.

She went on, describing said woman as dressed to a T, with her beautiful children and seemingly incredible family life. Every photo is over-the-top perfection, her house is always amazingly styled and her dinners, I’m sure, are home-baked to gluten-free vegan perfection for her model husband. {No wait. I’ve got it all wrong… Her model husband cooks for HER. Even better – amirite?! …BTW he totes has a six pack.} They never fight, the laundry is always clean and there are never any crumbs on the floor. They’re at church every Sunday in matching clothes and their dog doesn’t shed. She never steps on a lego on her way to bed at night {because they only purchase small foam toys hand-whittled by elves from magical places like Denmark} and he never catches his little toe on the coffee table and says bad words.

This description was of course, totally ridiculous. And I, of course, am most definitely embellishing a little to make my point. 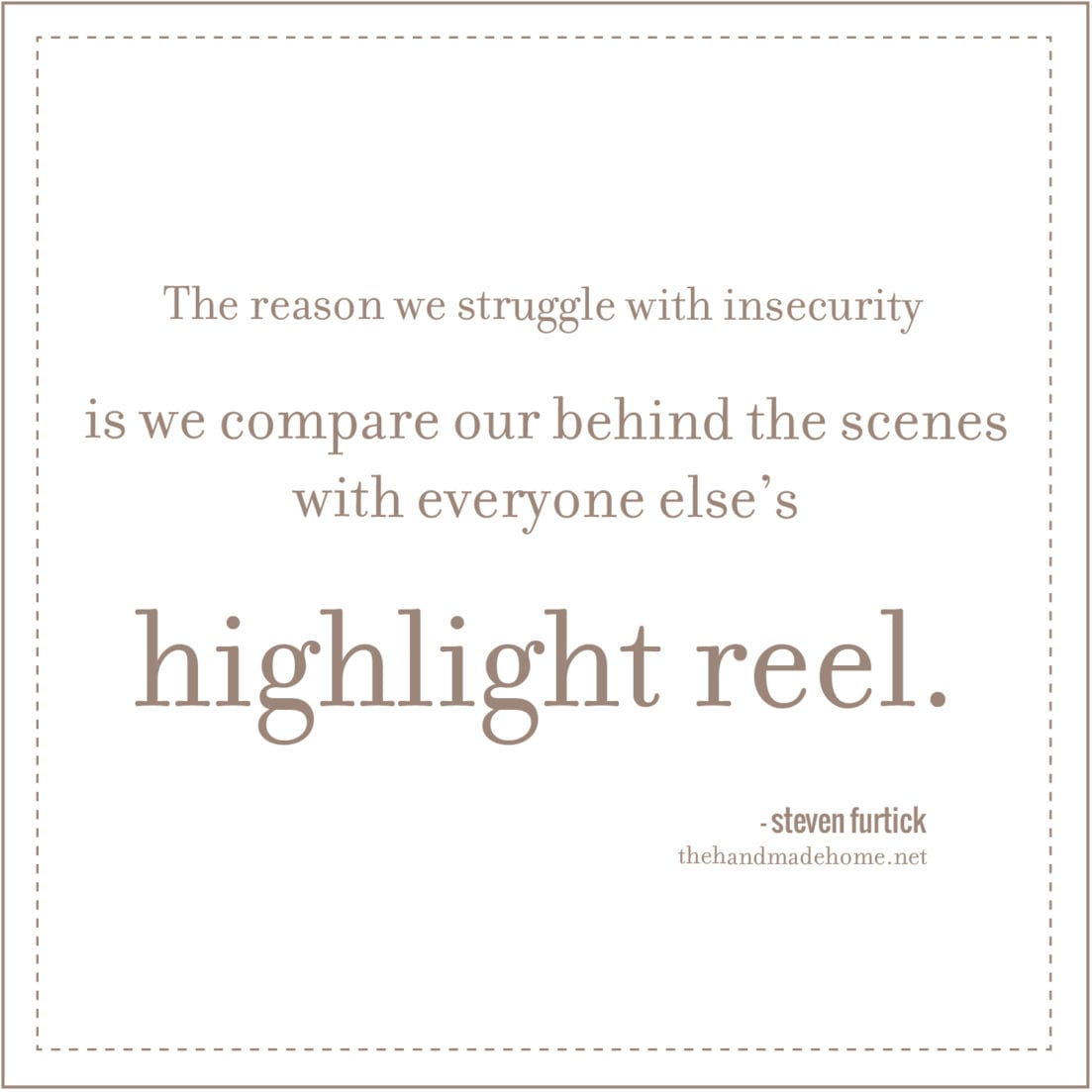 We shared this forever ago, and it’s still one of my very favorite quotes. Because in this world, we all need to be reminded.

I responded with, “And???” Because the most ridiculous part was that said friend who was describing this woman, can easily be described the exact same way, by someone else. I just wasn’t sure where she was going with it, but I got the feeling she was allowing herself to feel less than.

It’s so easy to A. perpetuate that and B. get absolutely caught up in it. It’s a cyclical trap. To the point where we’re scrolling through a screen, literally stuck in another world.

I went to a party last week where I was intimidated a little by the guest list. Because when in Nashville, and all those other cheesy mottos. But I think it can be easy to get caught up and perpetually lost in impressions. You see, a famous person was supposed to be there, and this person is a model. If I were to be a total nerd and make a Lord of the Rings analogy here, I’m a Frodo Baggins and she’s Arwen the angel fairy. She has gorgeous hair and is nothing short of amazing. But most importantly, she was killing it with her shoes.

Those shoes, y’all. And I was thinking, must be nice.

And then I actually felt silly. Because she was totally normal and I’d built up this persona in my head and all she was doing was being her. I should have celebrated that, and instead here I was, exposed by my own insecurities. I found myself reeling a little.

What had I been so caught up in? And why?

And more importantly, how much time do we spend in this state, without even realizing it?

We live in a world where social media is king, and news stories are the absolute truth. Questioning something is no longer the norm. I fear for my children as they grow up in this culture, and how they will perceive or be perceived. It’s becoming a nation-wide epidemic and it’s so easy to spend our energy caught up in it all.

All one has to do to get my point, is click over on a news story on Facebook, or check out someone with a large following sharing something seemingly-innocuous as sushi on Instagram, just to see the ratchet nature of all the comments…

People are so angry.

I think I’m just confused as to why they’d want to spend their energy on being angry. But if we’re not careful, we all do some version of that, in our own way.

We may not have rabies and leave comments to let people know how angry we are, but we can get caught up in the comparison game, and not even realize it. 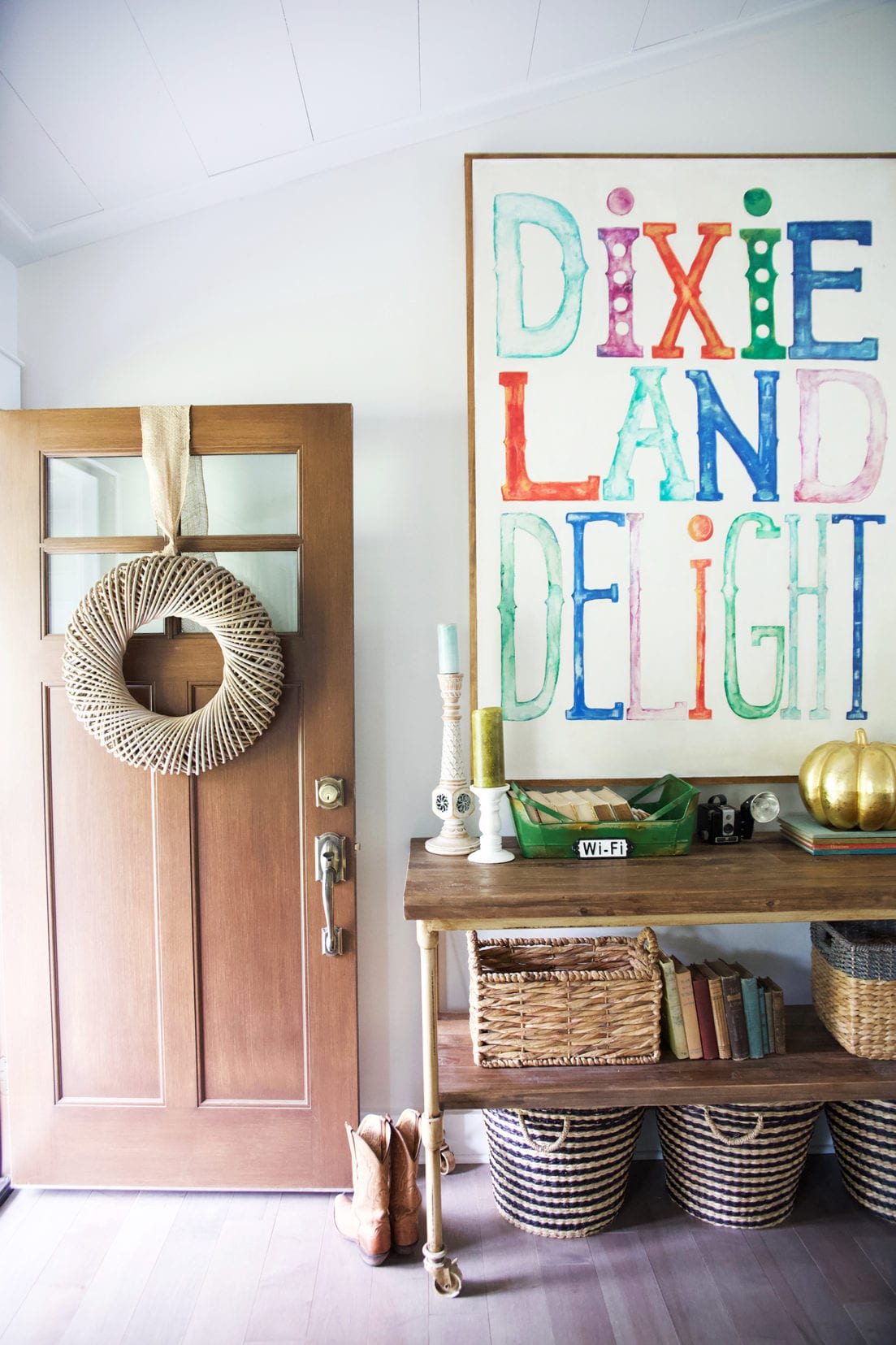 It’s so easy to blur the lines on what’s reality, and what’s not. It’s so easy to forget that this person we’re viewing with our own perception has probably worked really hard to achieve x, y, and z. Or they have so much more going on behind the scenes. I was listening to a great podcast the other day, and Kristen Bell basically made the point that we no longer live in smaller tribes any more. Where Jenny is the best singer, and Janet is the best athlete and you’re the best at fill-in-the-blank here.

We’re living in a curated world where there’s always going to be someone who is better at something than you. We have to let that go.

You can’t always win. You certainly can’t do it when you’re comparing yourself, and that little voice inside is beating you down. So it’s important to find your self-worth in better, more meaningful places.

I think I couldn’t agree more with her. I’m a perfectionist, which means I’m basically caught up in the highest form of self-torture. I think that it can be so easy to get lost in our own false realities and impressions, social media numbers and misconstrued perceptions, that we miss out on our own lives. It can be easy to lose touch with everything that we have to be thankful for.

To live, is a privilege.

How easily we forget. We forget that everyone on social media is showcasing their highlight reels. We forget about all the work that goes into that ‘perfect’ marriage or the ‘prettiest’ house or the ‘awesome’ outfit. And in that, we risk the danger of suddenly being lost in a comparison game, captured in a single image. Wasting our time on things that really don’t matter, when our energy could be put into so much more. Spreading kindness, doing good things for people that have less, and watering our own grass rather than being worried about what’s on the other side, are good places to start.

But it’s almost as if we’re so caught up in scrolling daily, that we’ve forgotten to remind ourselves how ridiculous it is to get caught up in it all. 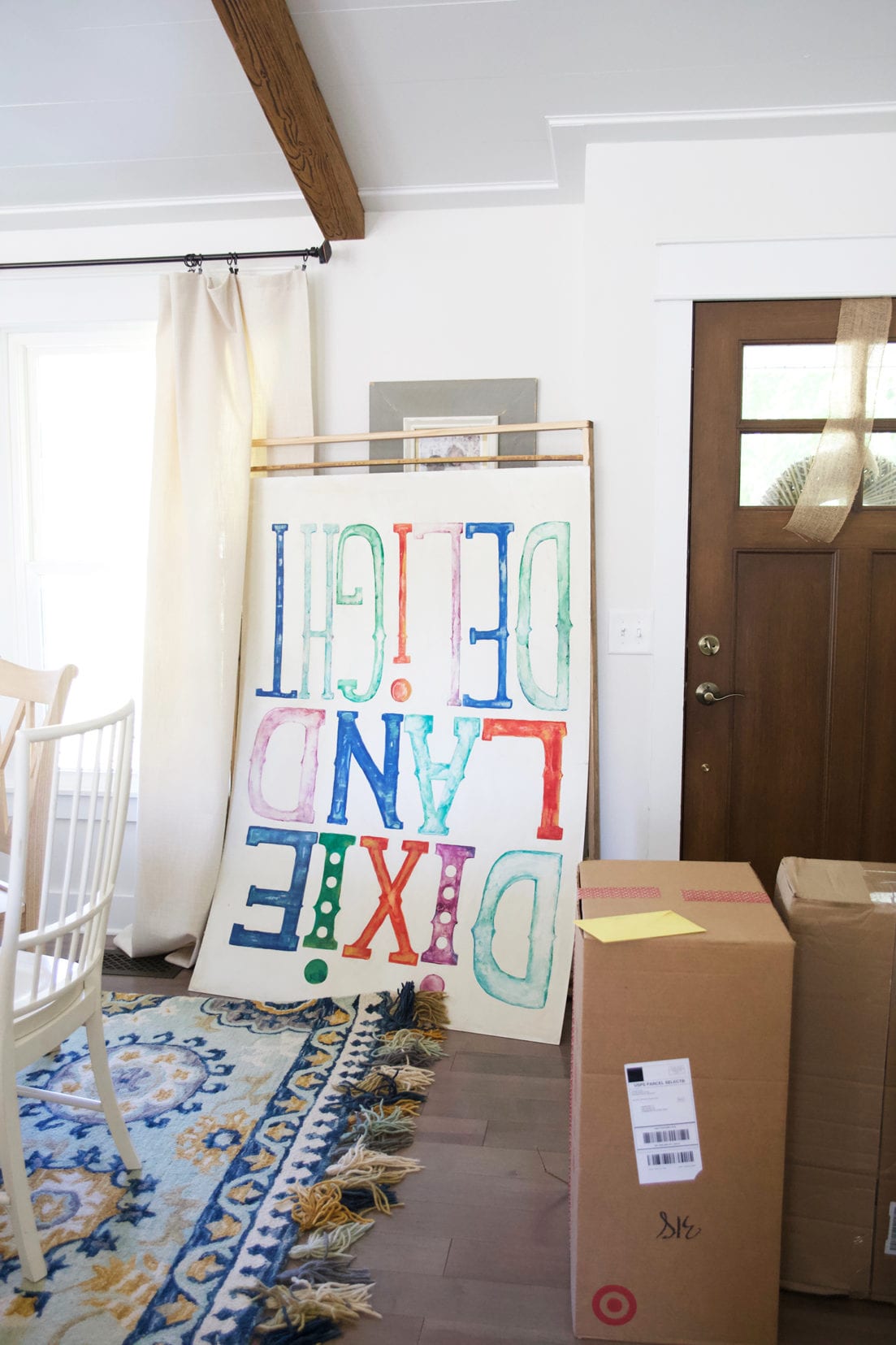 A few days after posting the first sign shown above, it fell off the wall, almost broke in half, and took a few candles out with it on the way down. Reality.

Because of that comparison trap, we also forget to cheer for others.

A little kindness, and a little less hate can go a long way.

On social media, we have a great marriage. But it’s because we’ve gone to therapy and we’ve worked really hard at it and it’s more than okay to work on your marriage. We have terrible days and we have amazing ones. We have more work to do, and it’s a daily choice. We’re working through things and it’s we’re stronger. We have three beautiful children who sometimes are amazingly hysterical, and sometimes make me want to wring their necks because parenthood. I have to work at being a proactive and thoughtful parent. No one warned us how hard parenting would be, but it makes us both better people. Jamin and I are creating a healthy space for them to be their own people. This is something we’ve had to learn on our own. On social media, I have a clean house. In reality, there’s still dog hair, or a piece of art has fallen off the wall, a bed is almost always unmade, or Jamin hit his head on a light for the fiftieth time and then it came right out of the ceiling {this was just last week}. There are always piles of laundry. And whenever you see a pretty shot on our own site, we had to prep it and work pretty darn hard to get it that way. On social media, we {Jamin and I} run our own business. But we are able to live and work together because we’ve made some big sacrifices along the way, and it’s not rainbows and unicorns and perfectly curated little squares on insanitygram. We deal with mean comments and crazy people just like everyone else. These past almost three years have been literal blood sweat and tears hard, in starting over again. But in that, we’ve grown as people and we love the journey and who we have become. 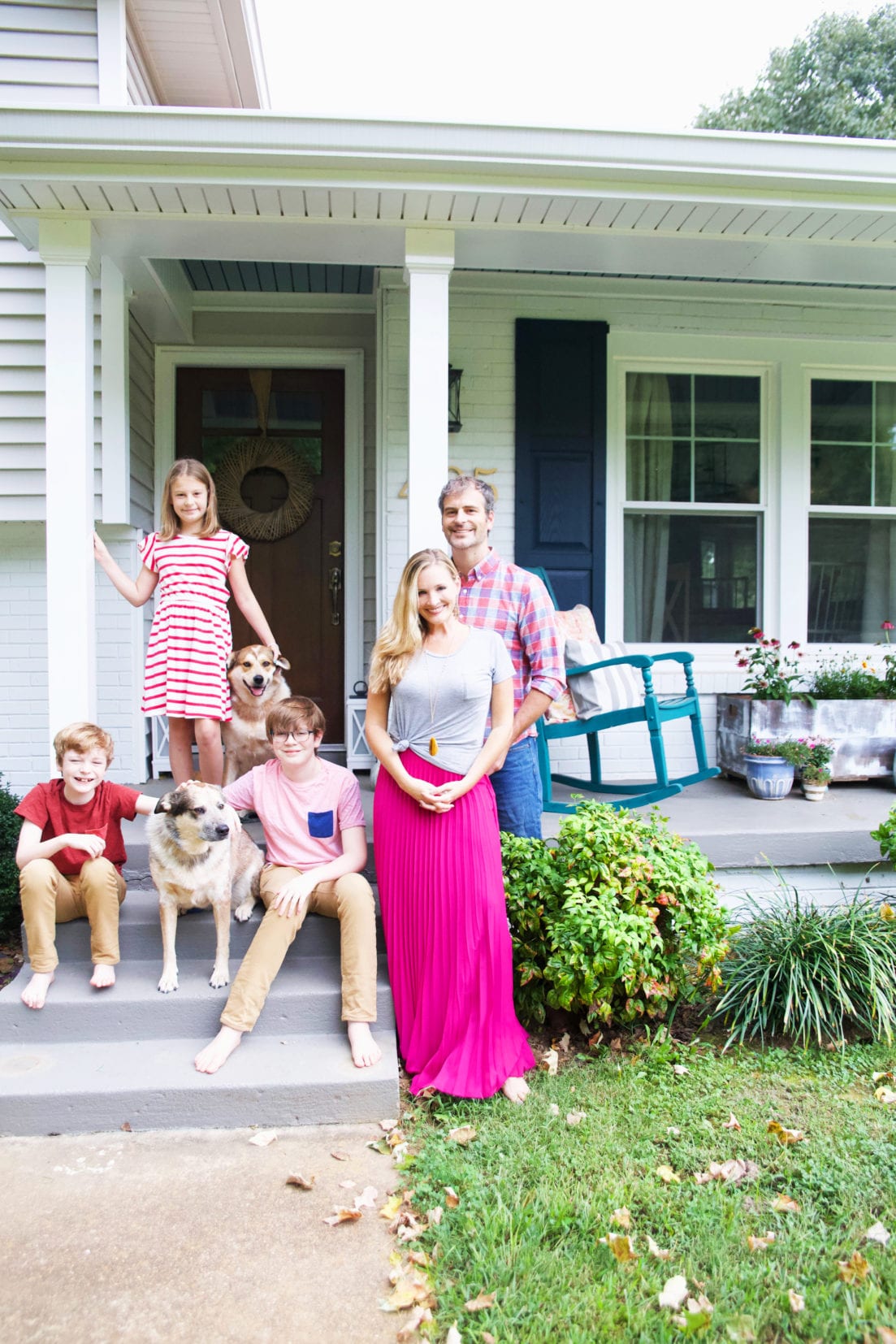 We begged our kids to take this picture with us, had to set the camera on auto, it started to rain and I stepped in mud right before a gust of wind almost blew the camera over. And this was take 2225 and I was mad at my hair. Good times.

On social media, we all smile big for the camera but there are so many behind the scenes struggles and processes that other people don’t see.

We all have complicated, multi-layered, less-than-perfect lives that mean more than just a tiny photo, captured in a colorful square. Everyone is fighting their battles. 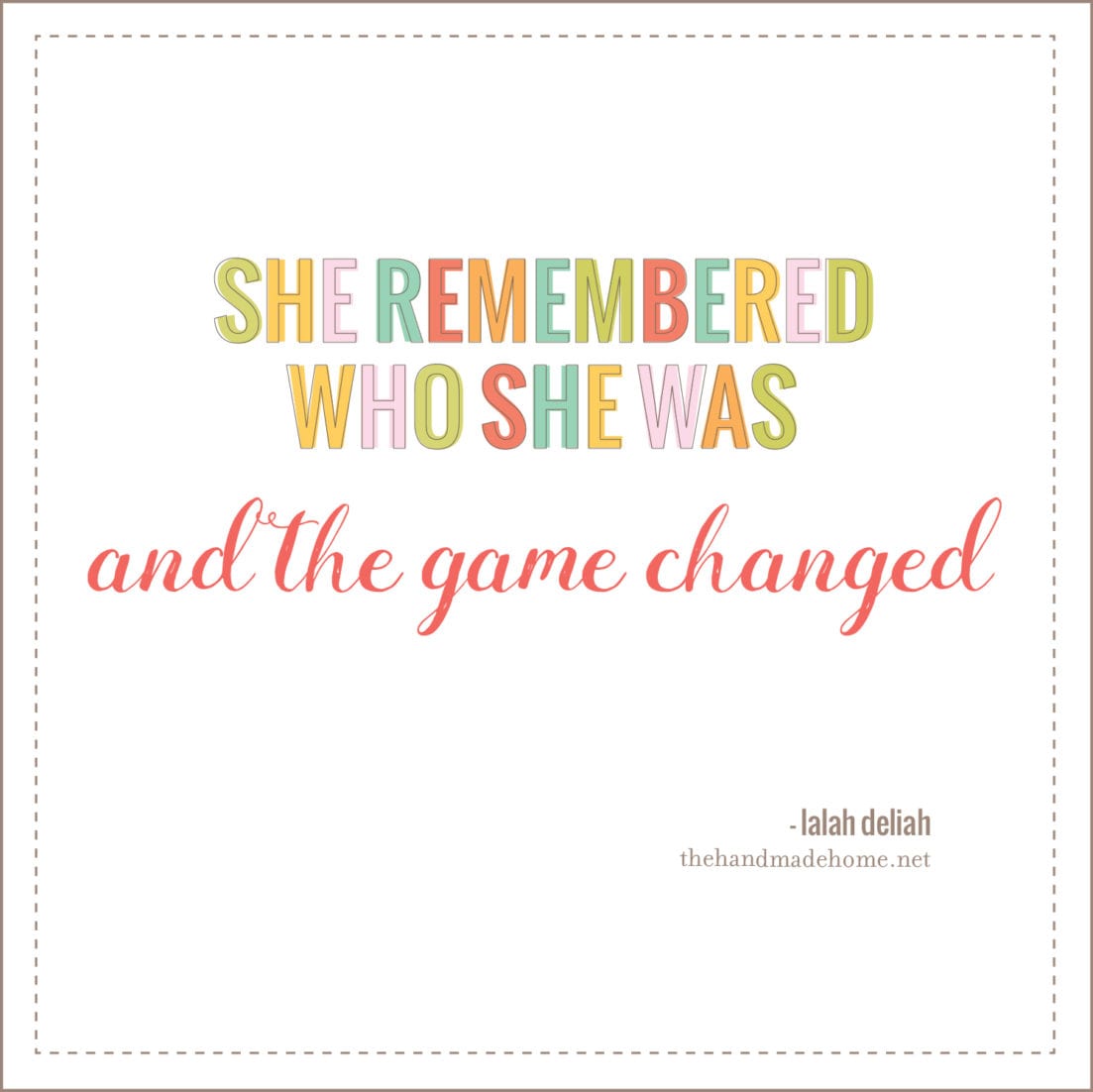 I think it’s important to take a step back and give those impressions that we have of other people, a healthy space.

And in that, check ourselves. We’re only human. It’s important to be thankful for our own lives, and what we have. For where we are on our journey and in our own story.

So just know that the next time you see a pretty image in your feed that makes you feel a little grumpy or ‘less than’, you’re not alone. Take a step back, and with a fresh perspective, know that there’s more to both their story, and yours. You’re more than kind of amazing at doing you, as no one else can.

Be grateful for your behind the scenes and where it’s brought you. Because we’re more than just a flat photo of a single, pretty image captured in a second of a moment. Don’t forget that we’re seeing a curated life when we scroll and don’t miss what you have, right in front of you. Because it’s in the behind the scenes parts, that make us real. We’re multilayered and dimensional on an ever-growing timeline… and I don’t know about you, but I wouldn’t want it any other way.