You are here: Home / confessions / a little humor / the one where I got into a fight with our van and lost

It’s probably no secret to any of you that I drive a minivan.

For those of you who have been reading for a while, you know my personal crusade to redefine its level of coolness, (even though I had a slight panic attack/meltdown in my pregnant state, the day we drove it off the lot and home to our soon-to-be family of four.) We are now, ever so unexpectedly, a family of five, so the whole “I’m a mom but refuse to drive a minivan” act wouldn’t have cut it. Yes. This was a hard transition for me, but a wise choice for us in the end. And I refused to drive just ANY minivan. I chose this particular mini because it was my fave design. In a few years, when the kids are older, I’ll probably have a “cool mom car,” so random people whose opinions don’t really matter can be excited for me. But for now, gigantic preface aside, I drive a minivan. And I pull it off quite well, if I do say so myself ::polishes fingernails::

It was Wednesday, the older two were at preschool, and I was out and about in search for some furniture for a client who’s space I am redoing. {More on that, later.} I had pulled the cool mobile up to the front to have it loaded with my new finds, Malone sitting quite happily in his car seat while I tried about twenty different seat positions in order to fit a monstrosity of a piece in the car. With the help of two burly employees, we finally wedged it into the right position {hello, future car = truck} and I was quite triumphant that I wouldn’t be making another thirty minute trip simply to pick up my finds.

What happened next was so fast, I’m still not even really sure exactly how it happened, or that I can articulate what it was. I hit the button on my keychain to close the back hatch. I turned around to manually close the side door, and turned to thank the guys who’d helped me load the car. But they had been all, “see ya, crazy van lady” and already headed inside out of the cold. I spun around to head to the back of the car, and to the drivers seat. Only apparently I cut it a little too close on the end, and the door, that had been coming down on it’s own, met me in the face.

It was one of those moments, where I just had to stop. I grabbed my injury and literally stopped myself from falling onto the concrete. The door, which I thought was ever so slowly closing, and which I always thought, until now, completely harmless, had the force of a mac truck catapulted by gail force winds, as if it had been planning it’s method of attack and the metal corner met me square in the face. I guess I had too much on my mind, because I hadn’t been thinking I would run right into the door I had just closed. Talk about feeling stupid.

And it was there, in the middle of the parking lot, in freezing weather, with my car cranked, and my child sitting in it, grabbing my face, that I felt like the biggest loser in all the world. Because I had just been attacked by the minivan.

I’m not really sure if anyone saw me, but I kind of wish I had some security footage of the fatal occurrence. {Because then after justifying calling Jamin and crying at the site of my horrific ordeal, I could share it all with you.} It doesn’t sound like a big deal, but it barely missed my eye, and holding the gash in my head, I made my way to the inside of the car. I’m sure people who were driving by at the time, thought I was completely inebriated. For a moment, I was THAT person, digging through my diaper bag, trying desperately to stop the bleeding. You all know that a gash in the head bleeds like an artery, so there I was, dripping all over myself, until I found, of all things, a diaper to press to my head to stop it. I glanced in the mirror and noticed my eye swelling to quasi motto proportions, and the underneath turning a lovely shade of purple. 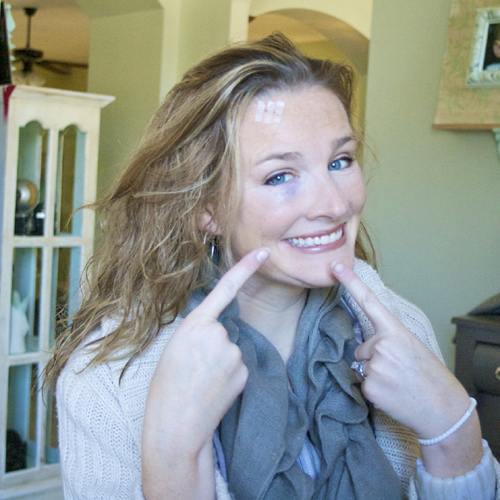 TADA! I am a complete dummy butt

SERIOUSLY? I thought to myself. Who does this? It’s such a classic Ashley move. And I think I was more angry than anything, so I just started crying, because I panic when it’s my blood. I finally stopped shaking long enough to move the car out of the loading zone, and called Jamin to tell him what happened. I think he thought I’d been in a serious wreck, and once I told him how my injuries occured, and once he’d shown an adequate amount of empathy, he started laughing.

The photo above doesn’t really do it justice. I tried covering it completely, but I figured a little purple was better than just a swollen morphed face. I just wish I had something heroic story to go with the injury. I was saving caterpillars from a burning doll factory, and fell and scored this injury. Where’s my trophy? Go me. Because tomorrow is Emerson’s birthday party. And for a good two weeks until this sucker goes away, any time I venture into public, I look like a bad halloween costume on the fly. I’m also the girl who looks like someone beats her. Hurray for me.

Ah. A day in the life for me and my two left feet.

when to go, where to stay, & how long: walt disney world

one year later: how we almost didn't make it

After 👌🏻+ Before - client space -with renter