Once upon a time, I found a puddle on the floor. 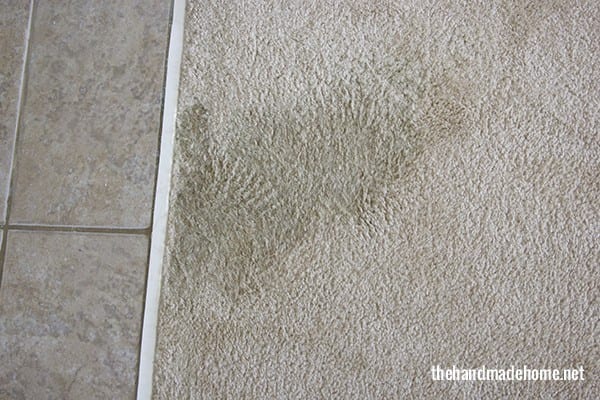 The puddle was magical. It would dry up, and reappear.

I ignored it for a while. I even thought it was the kids making a swimming pool with water bottles. I called them all in for a family powwow and asked what the heck was going on. They gazed at me with wide-eyed, glassy stares and said they had no idea.

But the puddle wasn’t magical in a good way. Like a unicorn.

It was magical like Satan. Because behind the walls, we found this: Our own personal Hell. Just kidding. 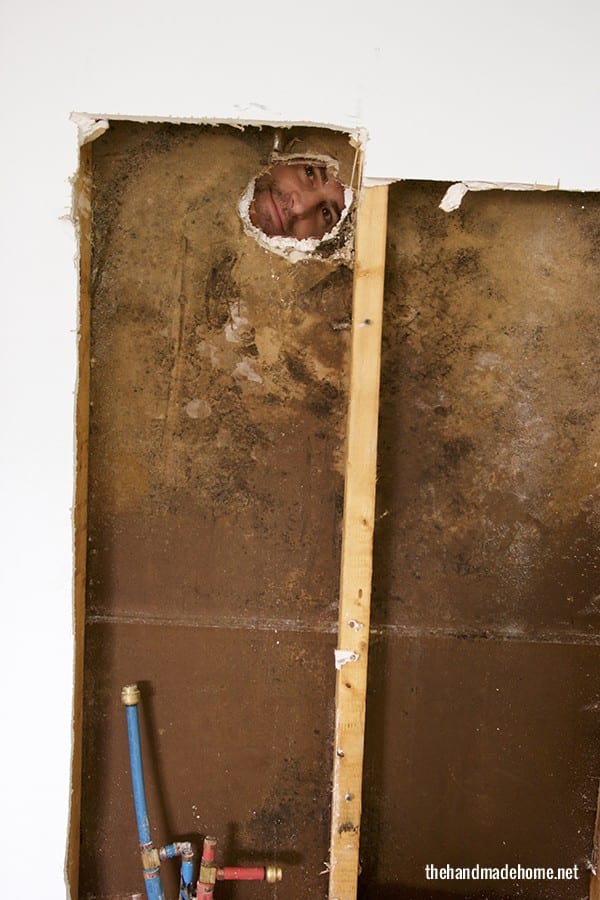 We never intended to replace the bathroom. We had no intentions whatsoever of gutting it out. It was never our fave, but it was what it was, and we fully intended to let it be.

But then there was a little bit of this.

Okay. A whole lot of this. 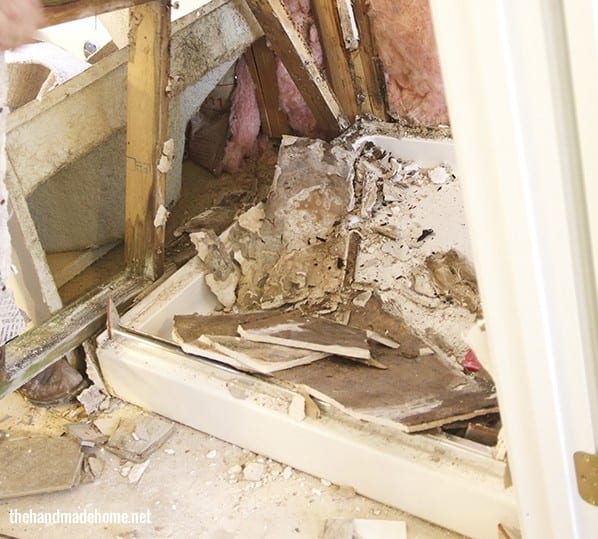 And it left us with this. I never thought I would feel clean again. In fact, you can read the whole not-so-intriguing story, here. Hashtag thespacethattookusforever.

For. Ev. Ver. Like, you’re probably tired of reading by now, forever. Because we never thought we’d finish. We were all Tom Hanks laughing hysterically a-la Money Pit up in here. 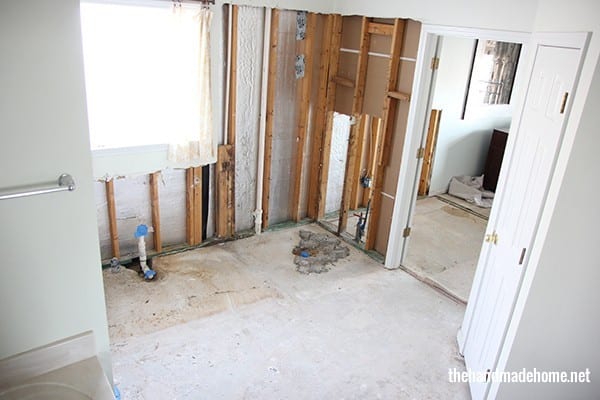 We tried to keep you entertained in the meantime, with closet redos, and home school revamps, job changes, and near murderous exchanges with hairnets. We even laid hardwoods. But it kind of felt like the cover band while we slowly but surely worked on this stuff behind the scenes. {Even though sometimes the cover band is better, you really want to see some other band that we don’t know about because the last time we went to a concert was pre-kids and we definitely need to get out more.}

But you know what they say. Lemons into lemonade, suckas.

So without further ado… Today is the day for the grand reveal. So sit back and relax with your choice cuppawhateva. Details to come very soon,  But we were just glad to get these photos out. We promise.

It’s amazing what a little tile change/color can do.

I had one requirement/request for this bathroom. Before the tile. Before the color. Before the design. It was the shower. In my own fantasy land, the doors would be frameless glass so that it felt like going to fancy shmancy hotel every time I stepped into my own bathroom. {And I wouldn’t have to clean hard water stains and mold.} I compromised a little because a maid wasn’t included, but dreams do come true. Ironically enough, it’s the last thing we installed yesterday, and by we, I mean the amazing glass people that it took us a while to find, because one dude showed up and basically wanted us to sacrifice our first born. {His glass was made of gold and included a set of magical leprechauns with a self clean button.}

Lesson learned that sometimes finding the right products take a while, and I’m now happy to report that I’m no longer crying a-la fetal position in the corner.

But more on that, later. 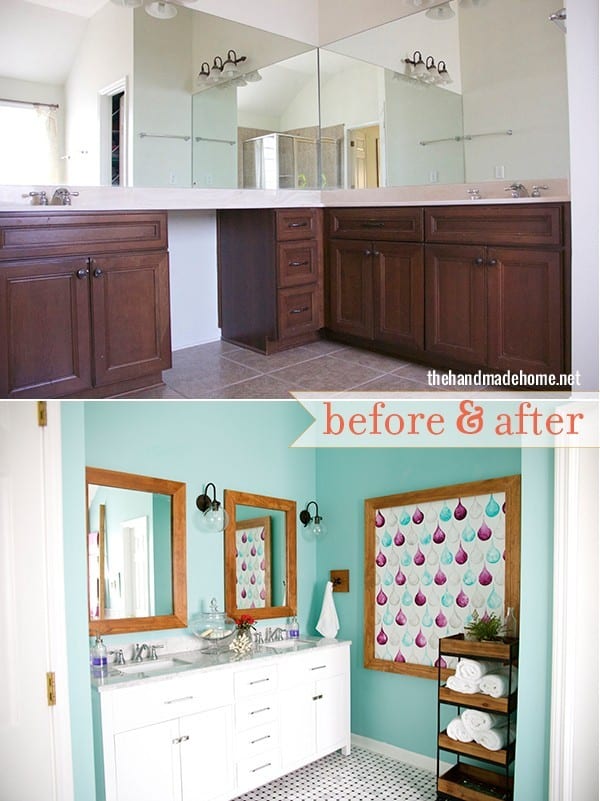 Everything but the vanity went… and we decided that now, if ever, was the time to go for it.

One of my favorite elements is this little toilet area. It’s a true game changer to have storage above your toilet, and a place to put your toilet paper. 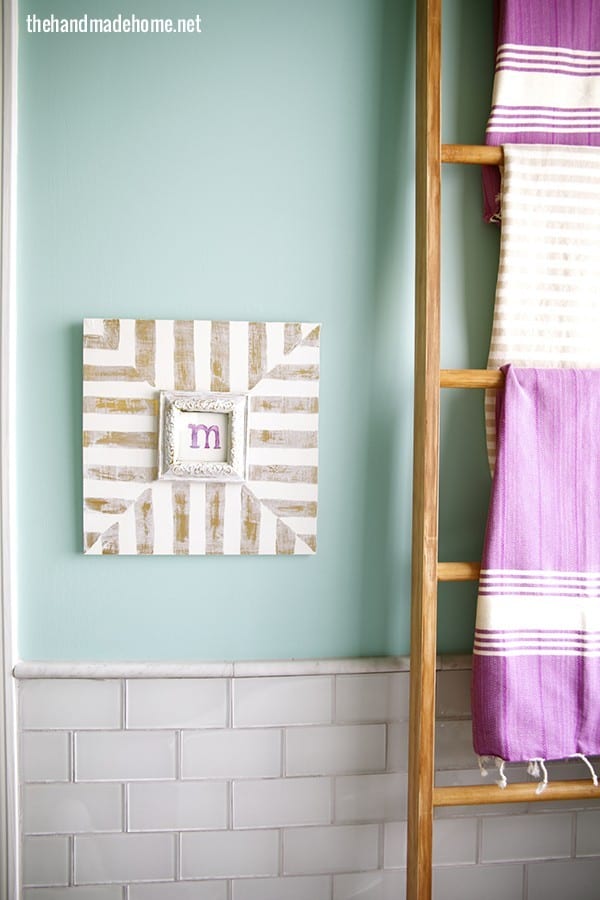 We decided to go bold with the walls, and take that beautiful glorious subway tile  all the way up on the far wall for some fun contrast. We love how it ended up unifying the space. 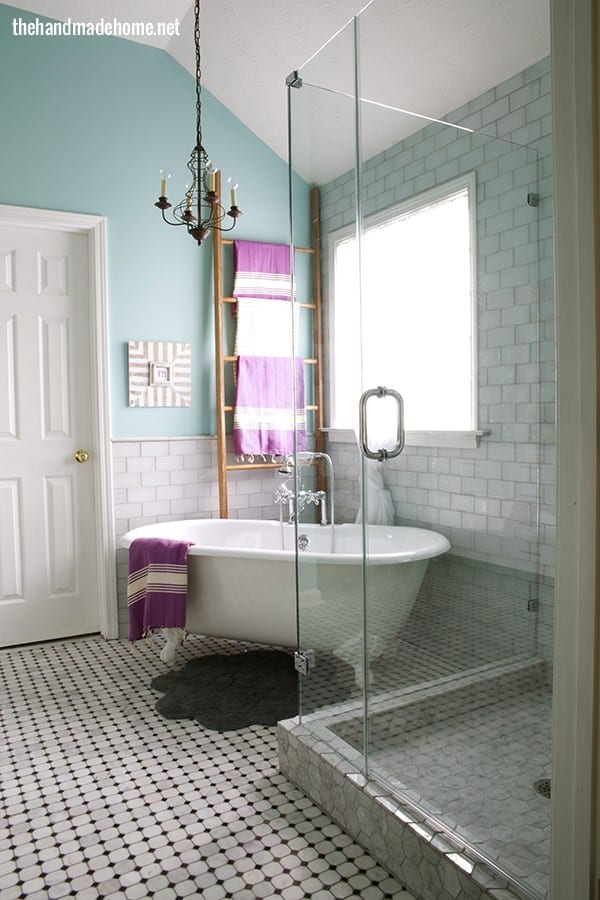 When we moved in, the only thing in the old bathroom was vanity lights. So we were thrilled to have an electrician add a fun swanky chandy over the tub. It makes me feel fancy when I take a bath. Just kidding, it’s really so I can see where I’m going at night, and avoid running into my glass shower.

We adore the three different tiles and the way they work oh so fabulously together. 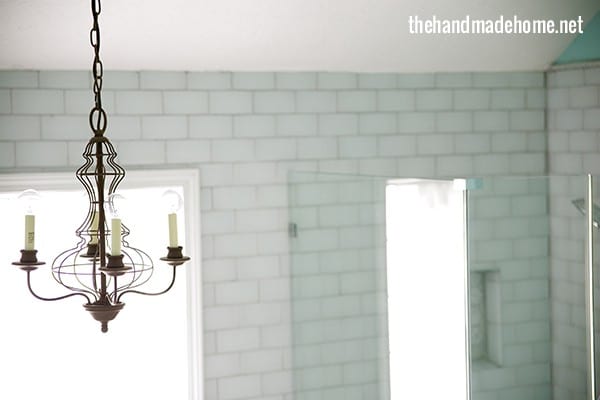 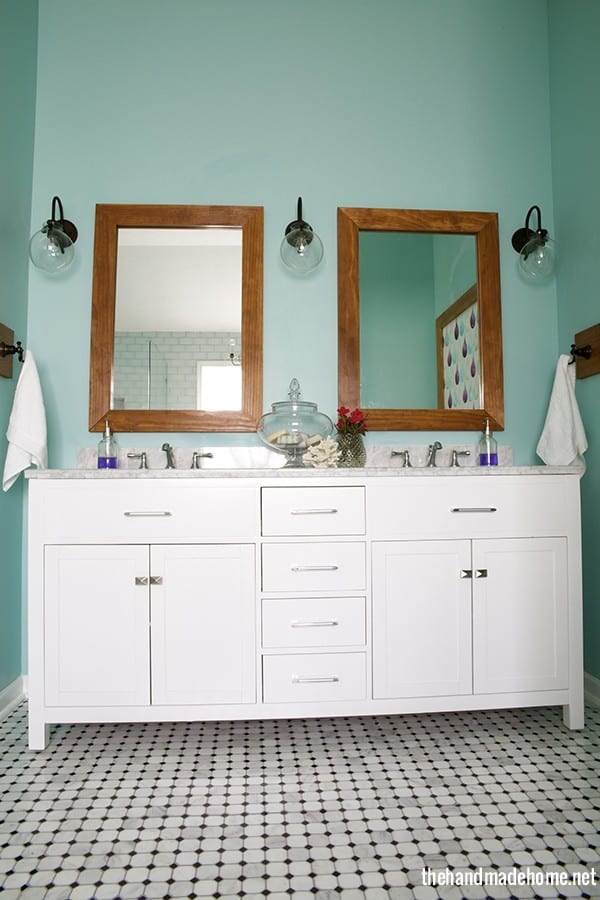 We’re debating getting a rug for this side, but to tell the truth, we really don’t want to cover up that tile. 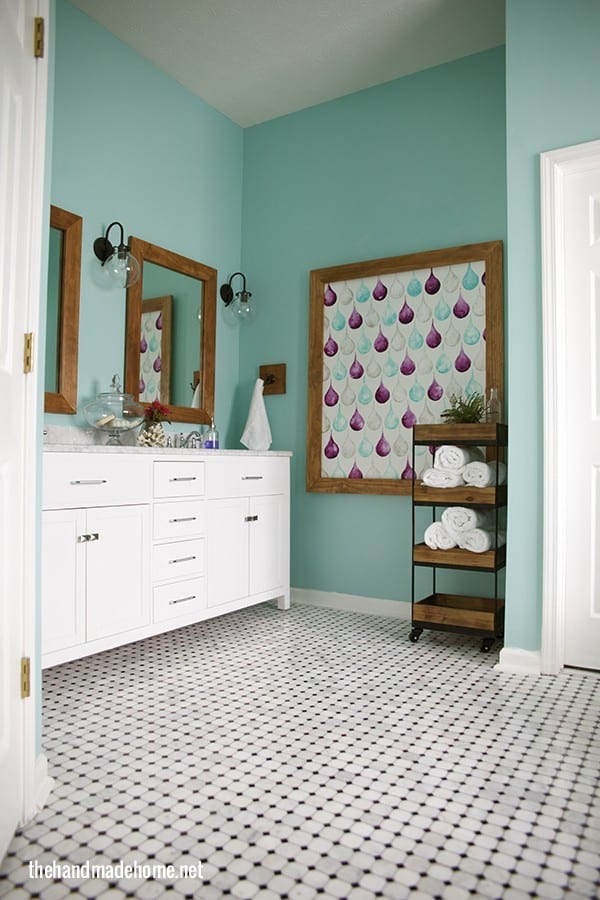 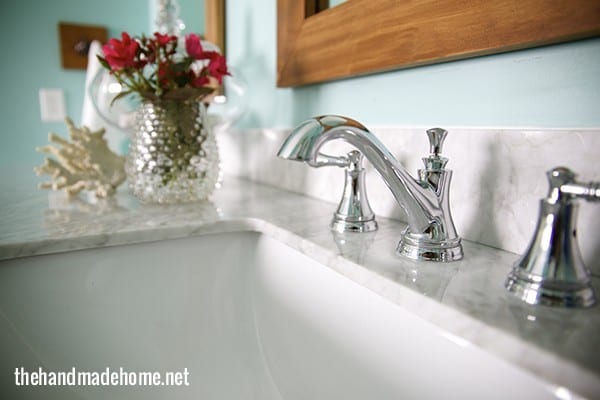 In the mornings I wake up, roll over, and oogle at the bathroom that took us an eternity, taught us a million lessons, and was well worth the wait in all things hard work and elbow grease.

I’ve never been much of a bath person. I’ve decided it was because I’ve had the wrong kind of bath. I ate pizza here the other night.

If you need me, you know where to find me. 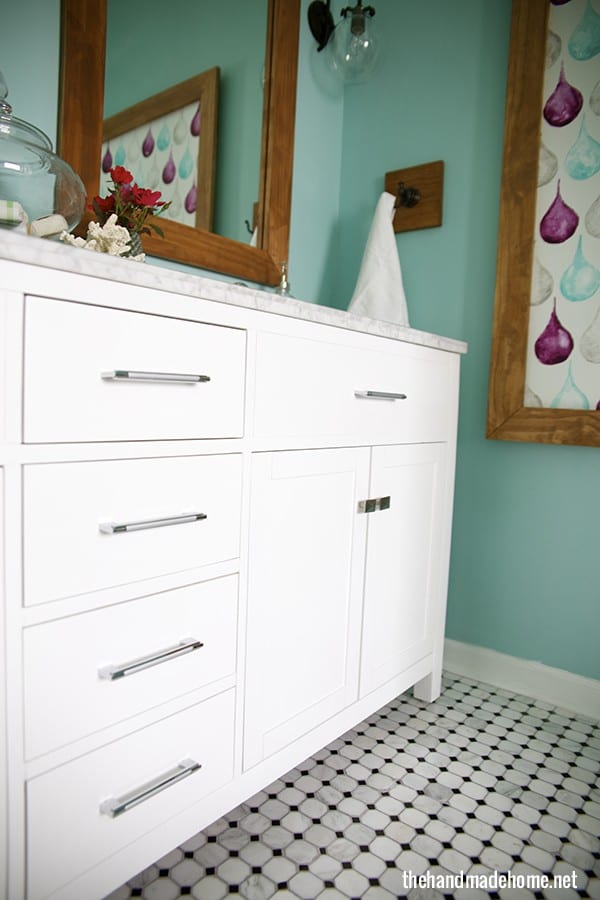 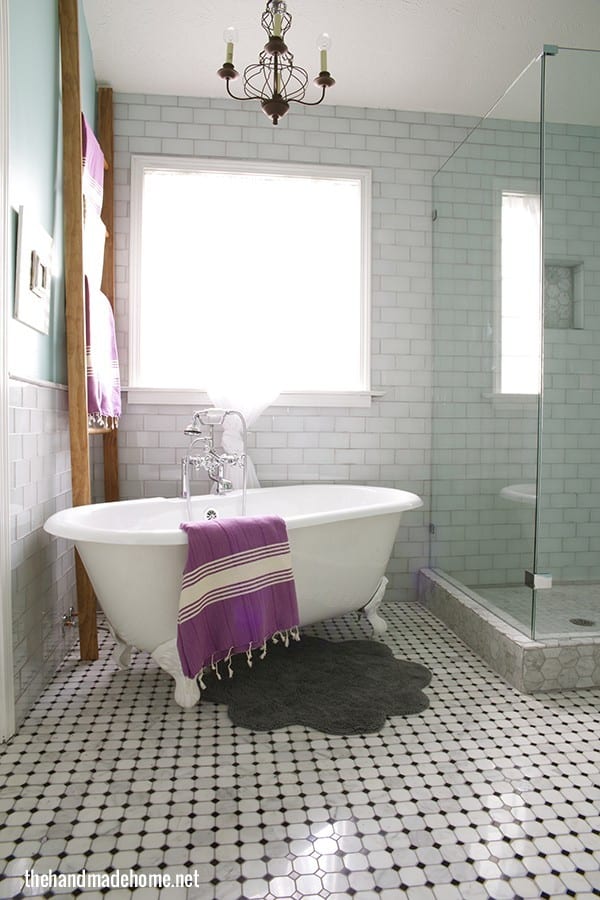 We put this big guy at an angle to make more space. It was a good call in the land of all things bathroom real estate. I think he needs a name. Any suggestions? 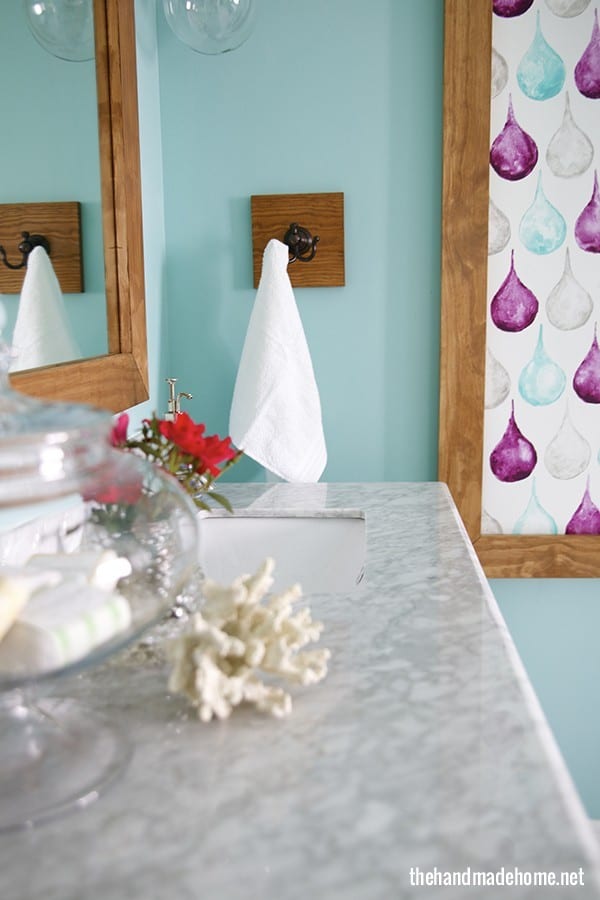 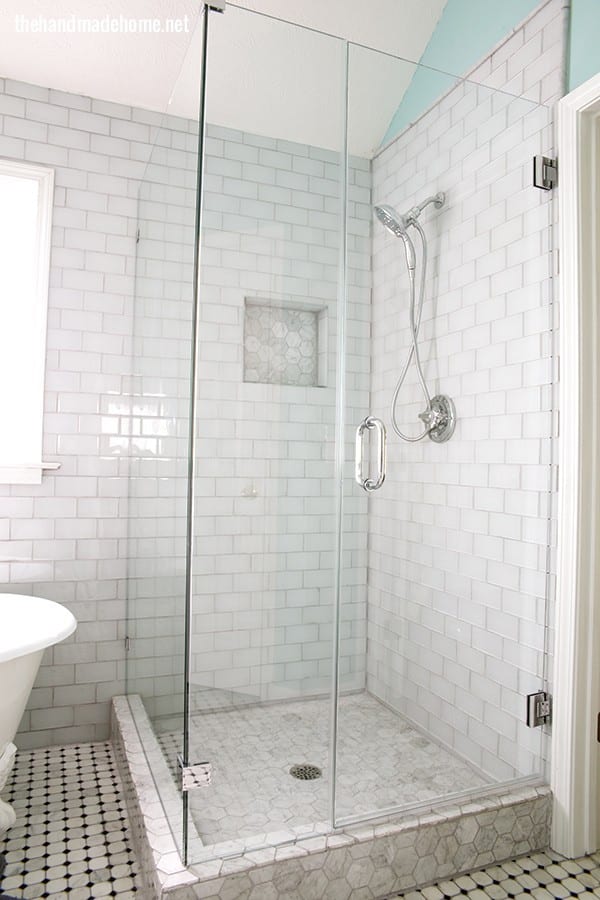 The previous shower had that wall, so it always felt more closed in. We extended it just a smidgeon, and lost the wall to enhance the open feeling. 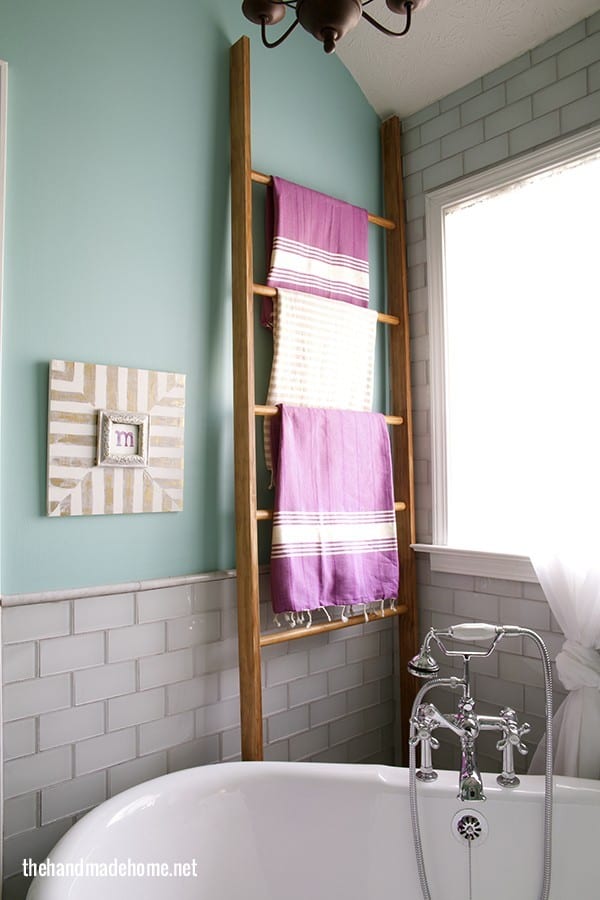 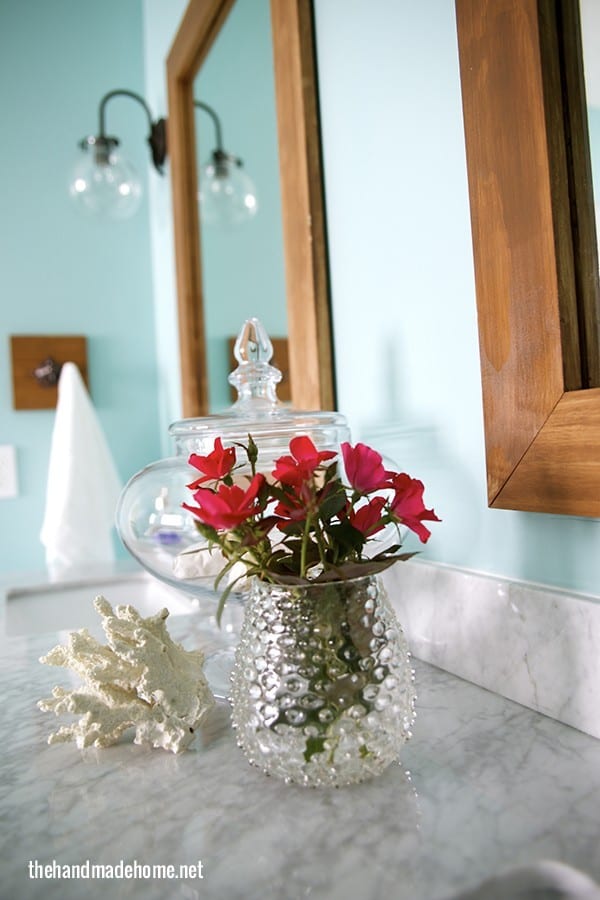 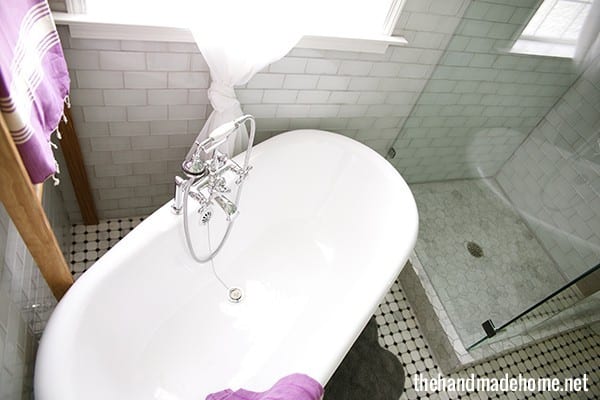 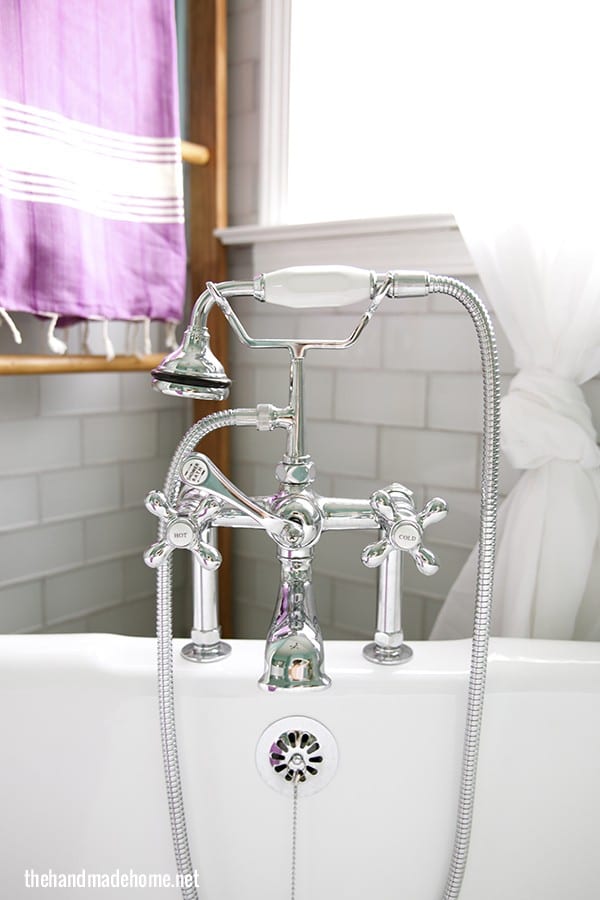 So details coming soon… as well as this bedroom completion! It was about time. Stay tuned!

It’s amazing what a little mold, uh, I mean patience can do! 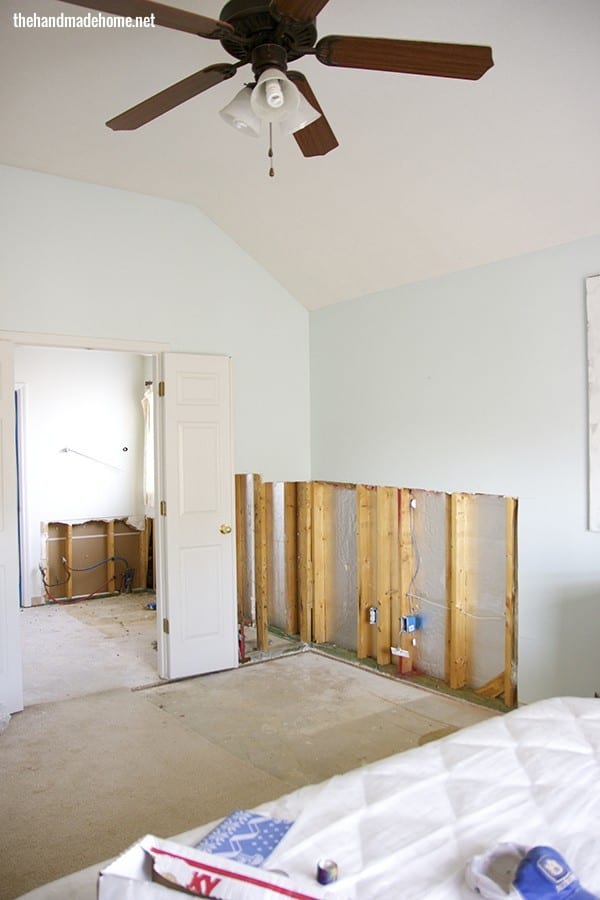 Thank you for being patient with us… and for hanging in with us on this little bathroom-adventure-extravaganza.

Have an inspired day, y’all!

PSSST – our sources are up! Check them out here! 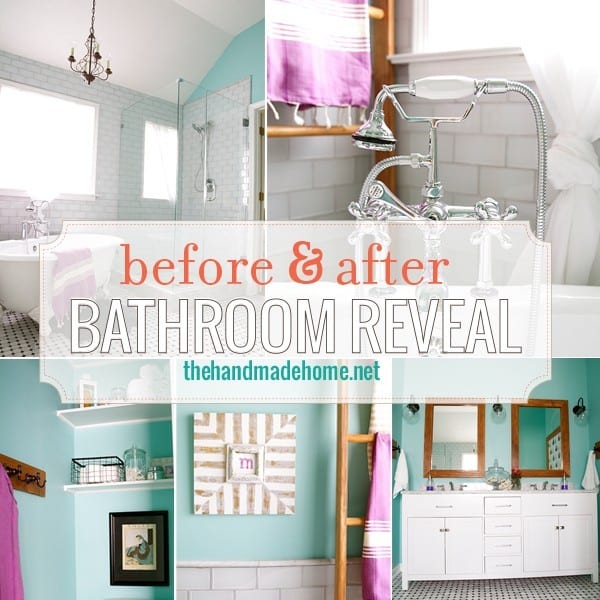