We’re home schooling again this year, but once upon a time, we sat in the carpool line. One day, we will probably sit in the carpool line, again. Because we’re parents and it’s what we do. This was circa 2013, but we’re sharing for those of you who find themselves in interesting carpool situations this year. Because I think we can all relate. ‘Tis the carpool lane season, and this one’s for you.

So far for this year (a whopping 8-day total at the time of writing this post) we can add, yet again, to our repertoire:

A. The experience that is a screaming hysterical kindergartener. Because that’s how we roll. She hasn’t quite adjusted, and ended up in the principal’s office with us on speakerphone proclaiming she’d stayed up all night roasting marshmallows – and the cherry on top? We could hear Aiden in the background telling her to run away. Mrs. J wanted to know why she wasn’t invited. Winning. {At least our principal has a great sense of humor.}

B. A stomach virus for my second grader involving the both-ends variety, in which I am now slathering all of us in Lysol and Clorox, praying we keep it contained. The boys were wrestling only hours before, in which case I’m pretty positive they spit into each others’ mouths, and sloshed it around like a petrie dish. Also, when Jamin gets the voms, he sounds like he’s strangling a small pony, so there’s that. Fingers crossed and it’s only August! So much to look forward to.

C. Yet another near death experience in the car pick up line.

D. All of the above.

Option D it is!

This is what the carpool line after school should feel like:

Because if I had my way, I wouldn’t even drive. And we could basically change this pic of me with coffee in the car, to me with coffee getting a pedi. 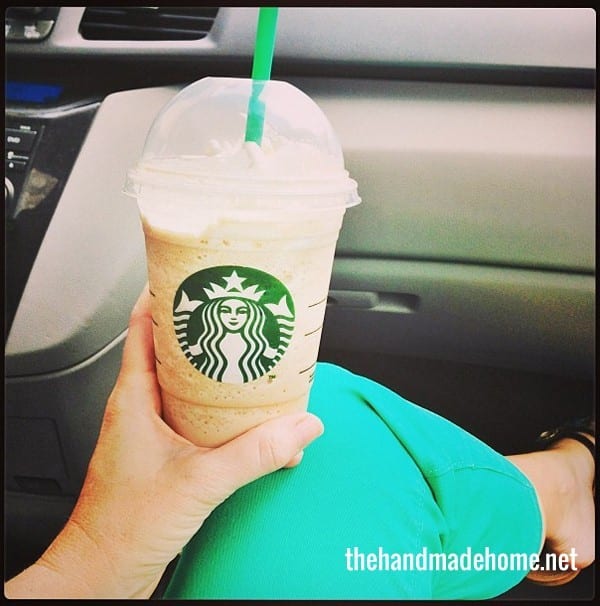 This is what it is, instead: 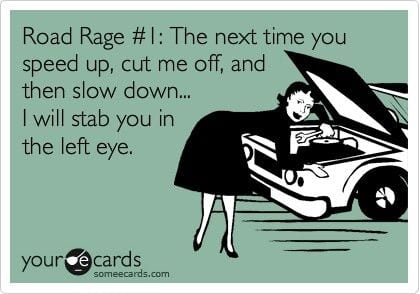 I’m a born rule follower. I can’t help it. It’s in my blood. Also, the proper procedure for car pickup at my children’s school isn’t rocket science.

This is how it works.

This is how it has always worked.

I tried to get my child to come to the car early once, before I knew. Before I learned the correct carpool lane procedure. A {very scary} teacher promptly corrected me and I cowered like a fourth grader who was just caught hiding her math grades, and will now be forced to skip space camp as punishment. I was afraid.

Uh, I mean, that didn’t happen to me… I would never hide my grades. And I always did well in math.

It was so bad, that when the other moms found out what happened, and who did the scolding, I got a little bit of a pity party. We were all afraid of that teacher. 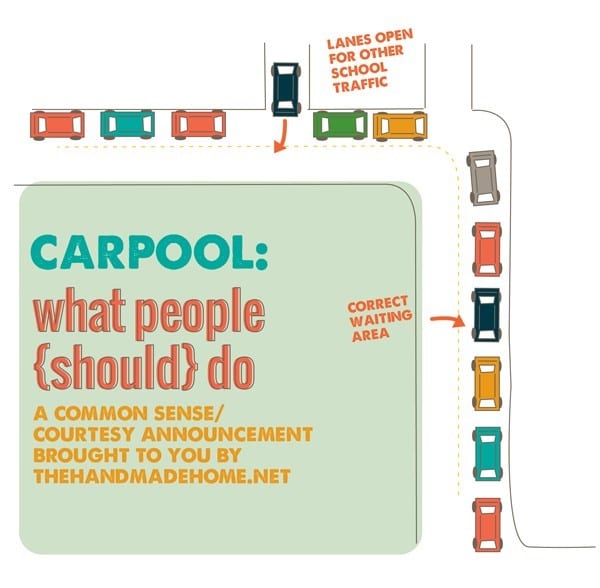 Did anyone see World War Z? Or those movies where a big catastrophe is on the way, and you can feel the insane pressure building because of the ominous background music? The main characters sit cluelessly, totally unaware that their lives are about to change in a chain of unfortunate events. A giant Sharknado chainsawmasscarefest is about to appear. The tension builds. We’re all, sitting in the car happily singing and then suddenly someone knocks off the side mirror but keeps going. Confused, we look out and there’s some crazed outbreak over who can get to the front of the line first. Someone flipped their minivan five times, there’s an airplane that just ripped through the parking lot in an emergency landing, and a shark falls from the sky. Cue the helicopters. People have rabies. They. Are. Flipping. Out.

There’s something special about the car rider line that causes people’s I.Q.’s to drop by oh, about fifty points.

They’re all, a line? NOT A LINE!? As if they’ve been brainwashed into general aversion by some psychopath mastermind, and it’s a free-for-all, hurricane/zombie apocalypse/black plague outbreak meets the Indy 500. People are screaming and running through the parking lot. Faces are melting off.

It’s pretty much like when the weatherman in Alabama predicts snow.

No one is safe. There is no milk to be found within a fifty mile radius of the grocery stores. You will starve to death if you don’t grab the last loaf of bread. Bonus points if you snatch the final Spaghettios from the hands of a screaming four year old while knocking that 90 year old woman out of the way on your way to the checkout counter. People are losing their ever loving minds, despite the fact that we will get a few flurries and then sit in our homes afraid to drive for the next three days. Someone just threw a brick into the local electronics store window. We’re lootin’ everybody up in here.

It’s coming: the ominous 3:00 PM hour in which the herd is released and we all just. May. Die. 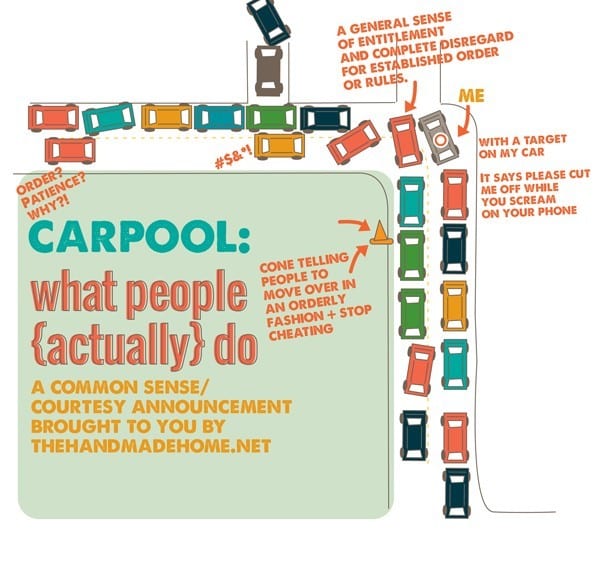 Y’all. We do this every day. It’s really not hard.

Get in line, and wait.

Let’s zoom in, shall we? 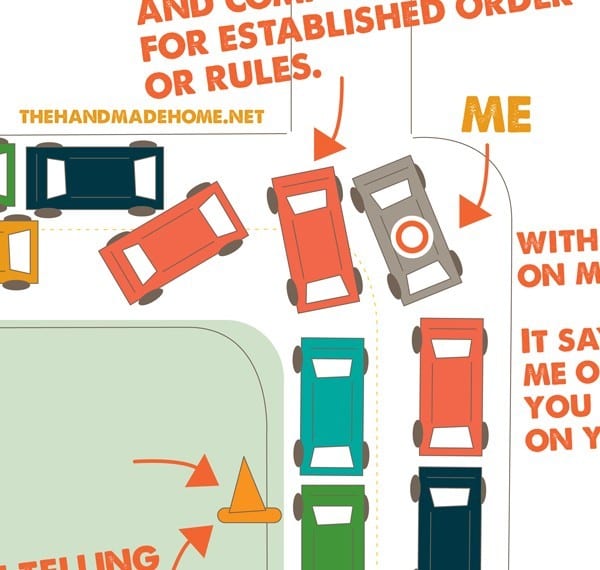 This, combined with the delicate combination of being a passive aggressive people pleaser… and I’m pretty much screwed. I may as well don a blue flashing light on my car and start screaming “Citizen’s Arrest!” in my best ultra-redneck/deep south voice when people cut me off.

I get really southern when I get mad. It’s in my blood.

I guess I deserve it for not wanting to maul someone with my tank of a van in a school parking lot with fifty children watching.

My bad. I forgot we’re supposed to act like adults. 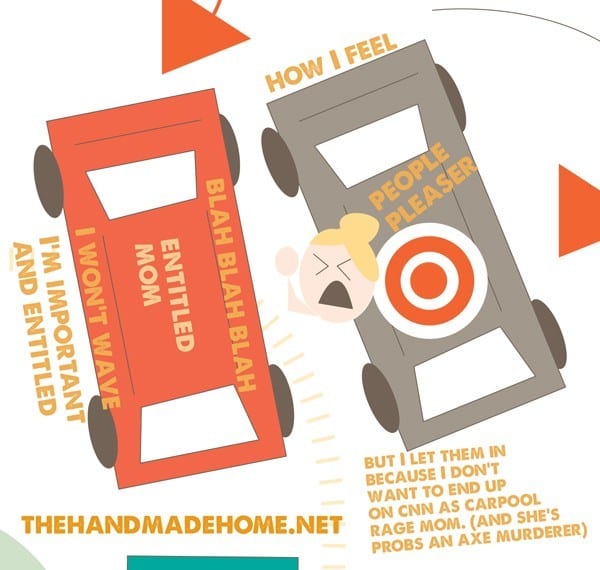 I’m pretty sure if I laid down in the wrong lane and used my body as a barricade, people would use it as a speed bump.

I’ve lost my final grain of hope for humanity.

The final straw came last Tuesday. I was waiting in line, in the predisposed orderly fashion we are to model. I’d held my spot for a solid thirty. And I was so proud of myself for getting there early. I felt like I needed a t-shirt or something to celebrate. I was contemplating starting a legit club for it all. Stay strong. Be patient. You an do this without killing someone.

It was T-minus ten. Ten whole minutes left before the children exited the building and it all began. So I cringed when Malone {three at the time} unbuckled his carseat. I couldn’t reach him from the front, so after contemplating for a few, I abandoned my remaining hopes for self-preservation, and quickly threw it into park and exited the car. I took a deep breath, and opened the back door to buckle him in.

It was a slow-motion noooooooooo fest when the line slowly crept up during my five second process. And said line crept about five whole feet. I only needed a moment to jump back in the front and throw it into drive. School wasn’t even out yet. But that was when the vehicle behind me promptly threw it into drive, revved their engine (as they nearly ran over me) and swooshed into the very narrow opening which had now formed in front. They were parked sideways. Just to butt me out.

There are some moments in my life where I wish I had laser beams that shot out of my eyes like those alien villains from the vintage 80’s Super Man movies. Or missile launchers on the front of my car. Or a giant, medieval catapult to lift and swoosh into oblivion. Or maybe even a giant container of cow poo, to dump on top of said offender.

I’ll take all of the above. This was definitely one of those moments.

Last week, Jamin witnessed someone pull past everyone in the (correct) lane (see: at least twenty cars) then back up in front of the first car waiting, just so they could go first.

Have we lost all sense of self-preservation, maturity, and common courtesy/sense?

Yes. Yes we have. Because I’m pretty sure some people never had it to begin with. 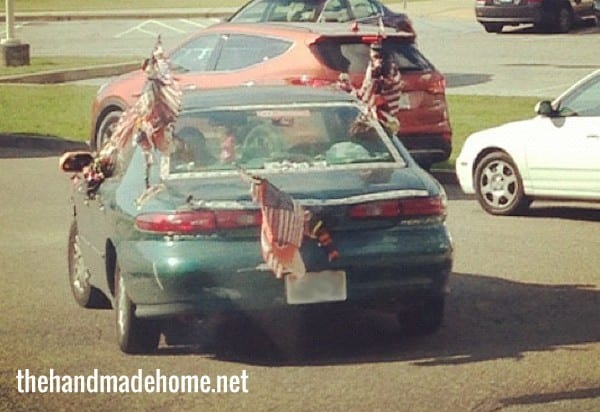 Also, on the way to school: See creepsters. Is this for real? 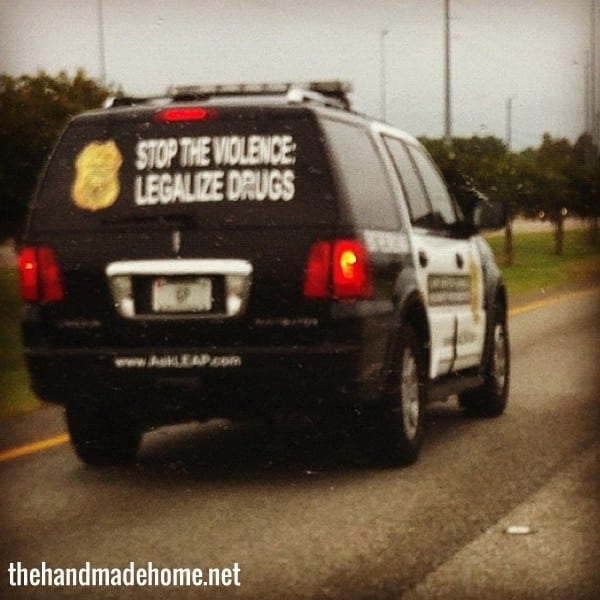 I need a taser. And a Xanax.

So here’s to you, carpool rage moms. May you take a deep breath, remember that it really is just a temporary line… and here’s to surviving the year. Without turning into the incredible hulk and hurling said offending car with entitled driver into a nearby lake. Because that would be fun. At least it is in my coping mechanism of a daydream. Shhhh. No judging.

Here’s to maintaining your patience, dignity, and all the fun things that come with picking up our children whilst modeling what normal, sane, healthy people do… minus the apocalypse infused catastrophes.