I don’t know if it’s A. Chloe, {we can’t even begin to thank you all for the sweet amazing wonderful comments and support we received – true heartfelt love and hugs to you all-they are priceless and we are so grateful}

B. the sheer exhaustion from traveling for Thanksgiving in an effort to get out of an empty house and do the whole family thing with crazy kiddos for a few days {let’s multiply points of merit x’s one trillion for that one alone as I’m sure those of you who also travel for the holidays can agree… is there some unwritten rule of no sleep?}

C. the fact that we decided to l rip out our pantry right before traveling for Thanksgiving… {we were asking for it}

But let’s just say we need a holiday from our holiday, y’all.

We arrived back in town last night just in time for two soccer games. We couldn’t even find our shinguards after frantic digging in the closet {see one quick trip to the local sports store to replace said shinguards reportedly eaten by the shinguard monster to be found later in the garage, so now we have about six pairs of shinguards. (I wonder how many more times I can write shinguard.) We’re starting a collection for which we will build a self-important wall frame with lighting to display prominently with chalkboard labels. Tutorial coming soon.} And, drum roll please, we totally forgot the snacks. Who forgets the snacks? See twelve pairs of forlorn eyes, in search of their well-earned goodies. See Jamin plowing down  innocent bystanders arguing over Gatorade prices in the local Walgreens with five minutes left on the clock, so he could slam into the doors just in time as the little players were exiting the arena…

Parental fail. Crackers and Capri Suns are of the utmost importance, and they were counting on us.

Our brains are gone.

Christmas isn’t even here yet. And there has been absolutely no decking of any halls whatsoever.

We just don’t have it in us.

But as it turns out, three little sprogs live here too, and we’ve decided to say to heck with school this week all in the name of sanity, all because we can. You can find us today, picking out a tree. Bring on the Christmas music, hot chocolate, and all the good intentions we had before the craziness hit. {Yoga pants foreva.} Sometimes, it’s important to do the little things when you need it.

So this little gem that we found again from last year, just felt fitting. Because we still feel the same way. We hope you find it… ummmm, relatable.

Somewhere between Thanksgiving and insert-a-million-other-reasons-to-ease-my-guilt-and-make-me-look-better-on-my-complete-disregard-for-the-socially-acceptable here…  I totally dropped the ball.

The level of suckage doesn’t begin to describe my slackerdom.

The other night, I got out of the house for the first time in a week, and went out with a few friends. They even drove because sometimes it’s fun to pretend we’re in high school again. It’s a mental health kinda rule with me. Must. Leave. The house.

I say it’s so I can be a better mom, but in the end, we all know that leaving the house for a few hours really can save lives. It’s a double win.

When they pulled up to the driveway they texted me because there were three small hugging zombie mutants in the foyer and I had to escape while they clawed at my body whilst trying not to slam any appendages in the door. It’s like a game they play because I’m so awesome. I left Jamin to deal with the ensuing carnage behind.

When I slid into the back seat, my friends were staring at my door.

Wanting to give me credit, at first they thought it was a super cool new wreath I came up with for Christmas. Accented with… pumpkins.

Then, they realized it looked like a spider web. A Halloween spider web.

“Yep.” I said as we drove down the glitter-laden street decked in dazzling bokeh lights. We were headed to a minimum of two hours of freedom in the form of dinner and seldomly-found adult conversation: “That would be our halloween wreath.” 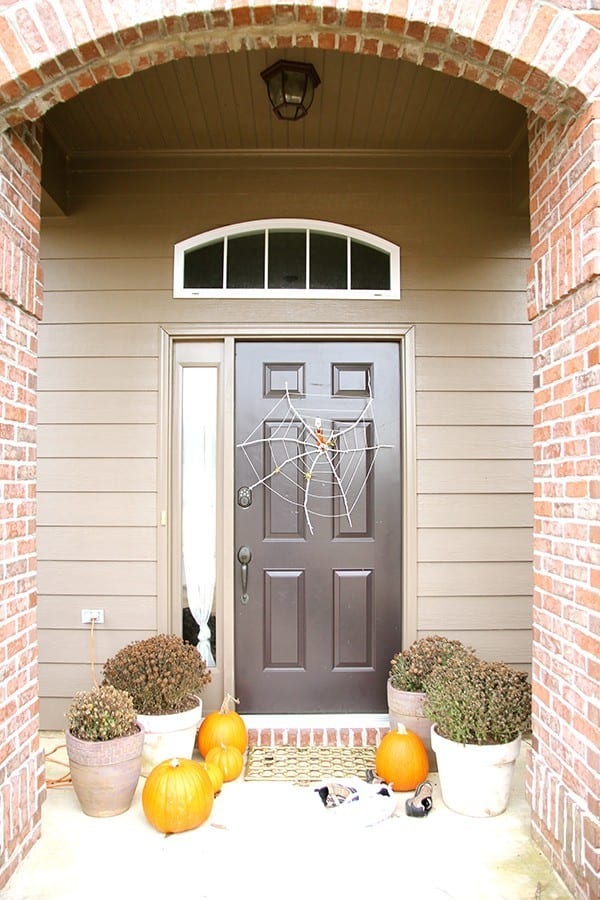 There is no christmas porch reveal this year.

My propensity for murdering mums is even more pronounced, making the Halloween door so cool, I kind of wanted to leave it. I was waiting for rotten spots to appear on those pumpkins to up the anté even further. This is me, raising my fist to the gods of Christmas marketing in absolute rebellion this year.

Usually we do it for the kids, but they haven’t even noticed. Then we realized we’d be struggling for three hours in windy weather for two mere weeks of electricity-infused gratification.

So, it is what it is. And while we’re on the topic of dropping the ball, who made up this calendar? Seriously. Who’s in charge? The Mayans? They were in charge of the end of the world a few years ago, right? Why did we only get three weeks this year?

Jamin claims it’s Lincoln. (See: Jamin is a major history nerd, so sometimes that’s hot, and sometimes I want to throw things at his head when he’s not looking.) Lincoln seems like a nice guy (Curses to you, 1863!) Plus he’s on the penny and stuff.

So I blame the ancestral Mayans and their loin cloths mixed in weirdly with apocalyptic spaceships. Seems legit. 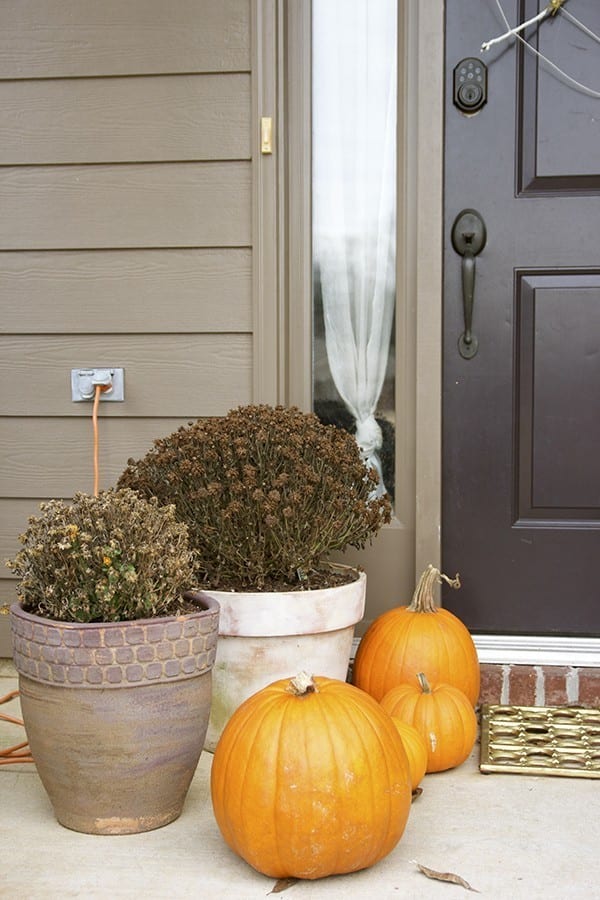 Our neighbors already think we’re crazy. Jamin is always cutting things, and I sometimes photograph them from the top of his shoulders. We don’t mind looking like a couple of weirdo acrobats all in the name of a great angle and better shot. That’s when we’re not squealing at wildlife, or super excited about shims.

So I’m basically just sealing the deal with said neighbors. 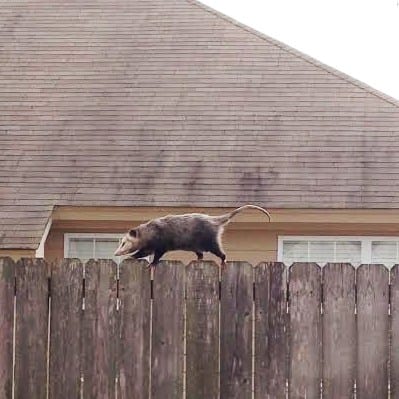 We’re officially those people. And I’m owning it this year. 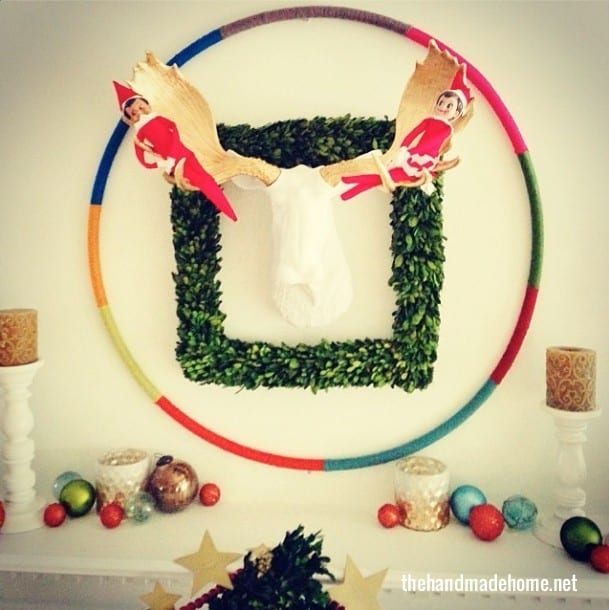 I want to punch the people who came up with this. In the throat. They’re basically the equivalent to the people who invented Fatheads, and stompeez and pillow pets and started marketing them to kids in between shows on Nickelodeon. There should be laws for common human decency and advertising to children, and those people should be made to live with their eyes taped open a-la clockwork orange while they listen to our children’s squeals of delight on repeat after the annoying theme songs.

But I take full responsibility for being a complete idiot and buying into it. (The elves. Not the Fatheads.) It’s like this weird mix of current regret and future sweet memories derived from absolute obligation… Parenthood in a nutshell. So here we are. Struggling to remember every day because we’re total slackers.

I keep forgetting. So much so, that I relinquished the job to Jamin this year. Which really just results in jumping out of bed in sheer panic nearly every morning, like that scene from Home Alone when the parents oversleep. And it’s a mad dash to find a new place, while we blame each other, our teeth clenched in hissing voices whilst tiptoeing around – elves stashed behind our backs.

Our elves are super tired with a vitamin deficiency, and the head elf doctor dude told them not to move too much this year. Or something like that. It worked when we were totally busted the other morning.

We will break up over this one. 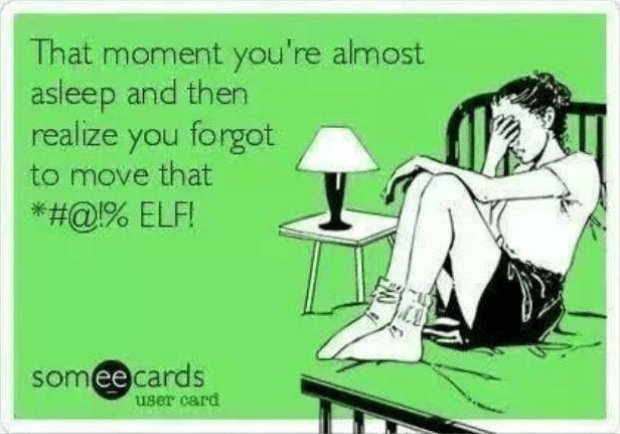 I tried to dig out the photos we had taken this last spring, and couldn’t find the CD after searching for a while. I looked for about ten minutes and decided to eat some chocolate instead. That just seemed like a better idea, not to mention it’s the one thing in our house that I can actually locate right now. In my world, not searching for three hours equals a win.

I would take a photo, but that would include getting everyone dressed and ready, and taking five hundred different versions of one shot. That also means finding one where the kids aren’t all gazing at me with confused faces while I hiss at them through gritted teeth within an inch of their life to smile. I don’t have the sheer determination to spend five hours photoshopping everyone’s distain from their expressions.

I love everyone who sent us one. I admire the fact that they have it together enough to send one. Please don’t scratch us from your list or defriend us, Christmas card friends. You know who you are. I figure our kids don’t really grow that much between each year, and most people probably open our card and then ask who we are.  {I’m looking at you, Aunt Linda twice removed by marriage.} So if we’re on an every-other-year kinda cycle, it gives everyone an adequate update and you’ll be super impressed by how big they’re getting and absence is fondness and other happy thoughts.

It also saves the trees. And postal workers. Or something. I’m a postal rights environmental activist.

I had good intentions. I really did. And that counts for something.

Let’s not forget about the time I did a little chalkboard art for our home tour, photographed, edited said photograph, published and… I didn’t see my miss until an awesome reader kindly pointed it out. Evidence may now be found all over the world wide internets through a little thing we call pinning.

The www equivalent to spinach in my teeth.

Photoshop is my friend, but only after I showed it to you. 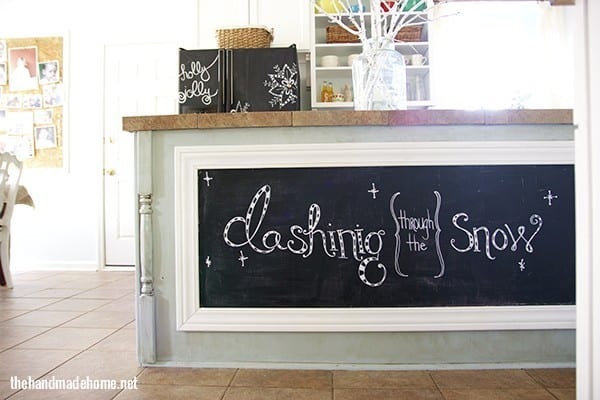 This year, it felt kinda good to just let a few things go.

I’m leaving up the Christmas ’til February. We’re having a dashinig good time. And that’s all that matters.