You are here: Home / the money pit / what we’ve got up our sleeves: main living area plans

We were thrilled to share an update of sorts yesterday, and we’re back today with our first round of plans for the main living area, and our general plans for our new abode in Franklin!

But first we thought we’d refresh the memory with a little tour of sorts. Because we didn’t really share in detail before, so much as telling the crazy story of how we found our house.

We’d like to start by saying that this is a total rehab. The house will be taken down to its studs, as it has a wonderful footprint that we can’t wait to make our own. This {the main living area} is the area that will be going through the most drastic changes. Oh wait… maybe that’s the basement? {Scary, y’all – seriously you should see the crawl space = hidden bodies} But we also want to preserve some of its original charm and vibe as we go. 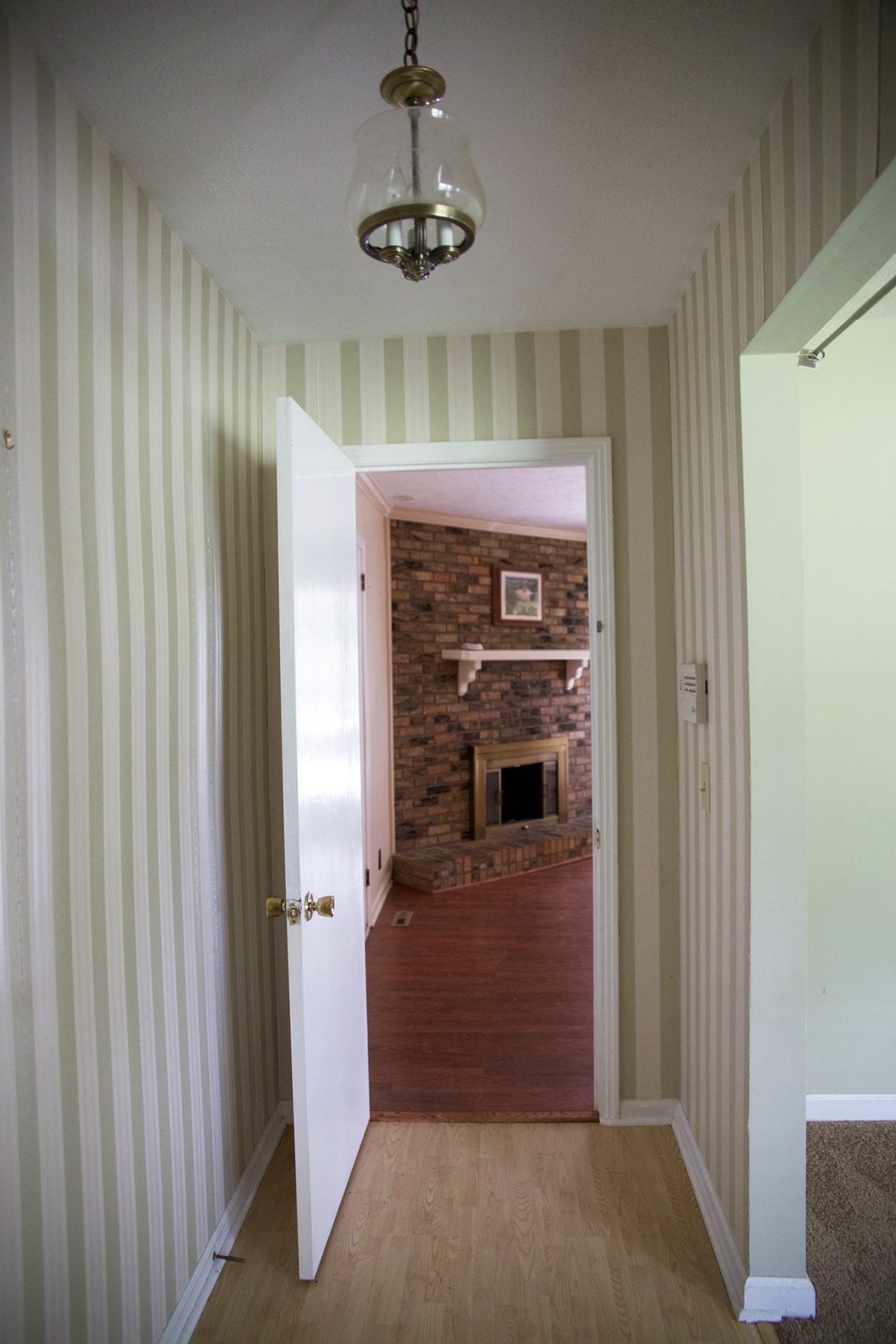 Our home was built in 1976, and according to the records, the last remodel took place in the early 80’s… though we can tell it’s received some fresh paint and flooring {carpet and linoleum-no, those hardwoods aren’t real, and they aren’t underneath} since then.

When you walk through the front door, there’s a small foyer area, and a formal living/dining room. 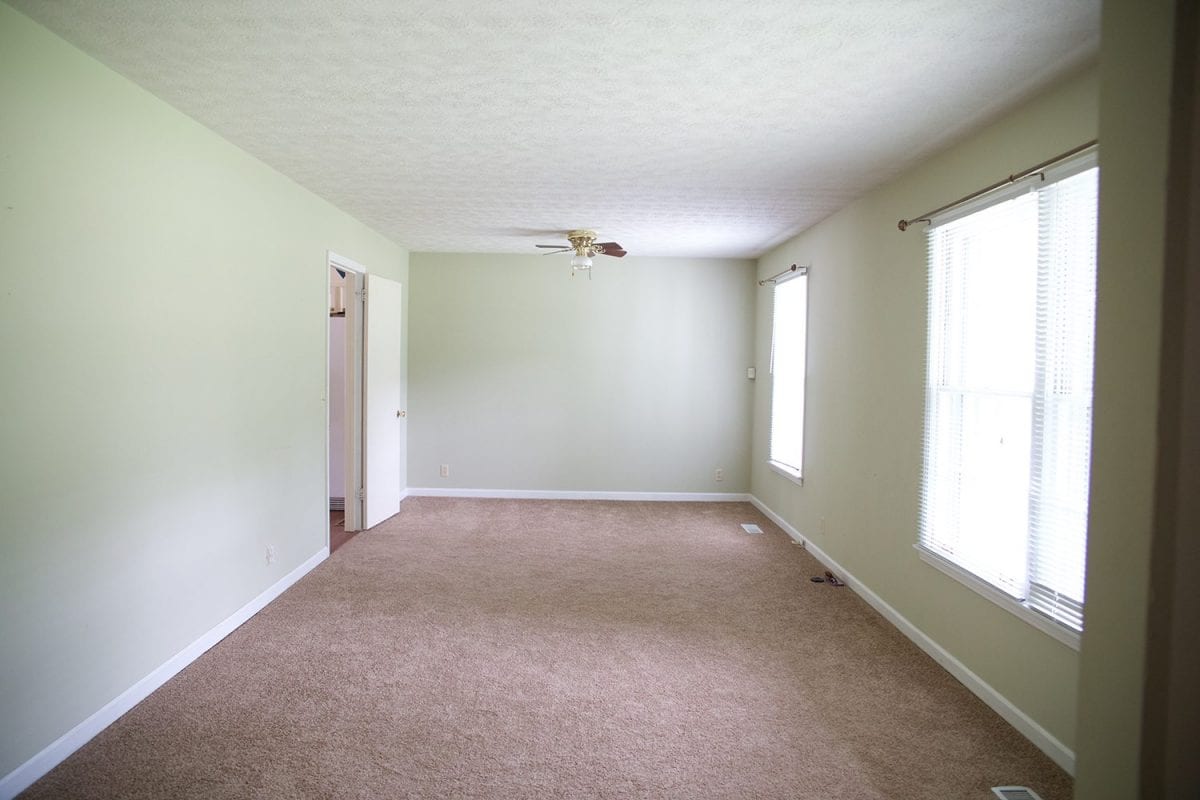 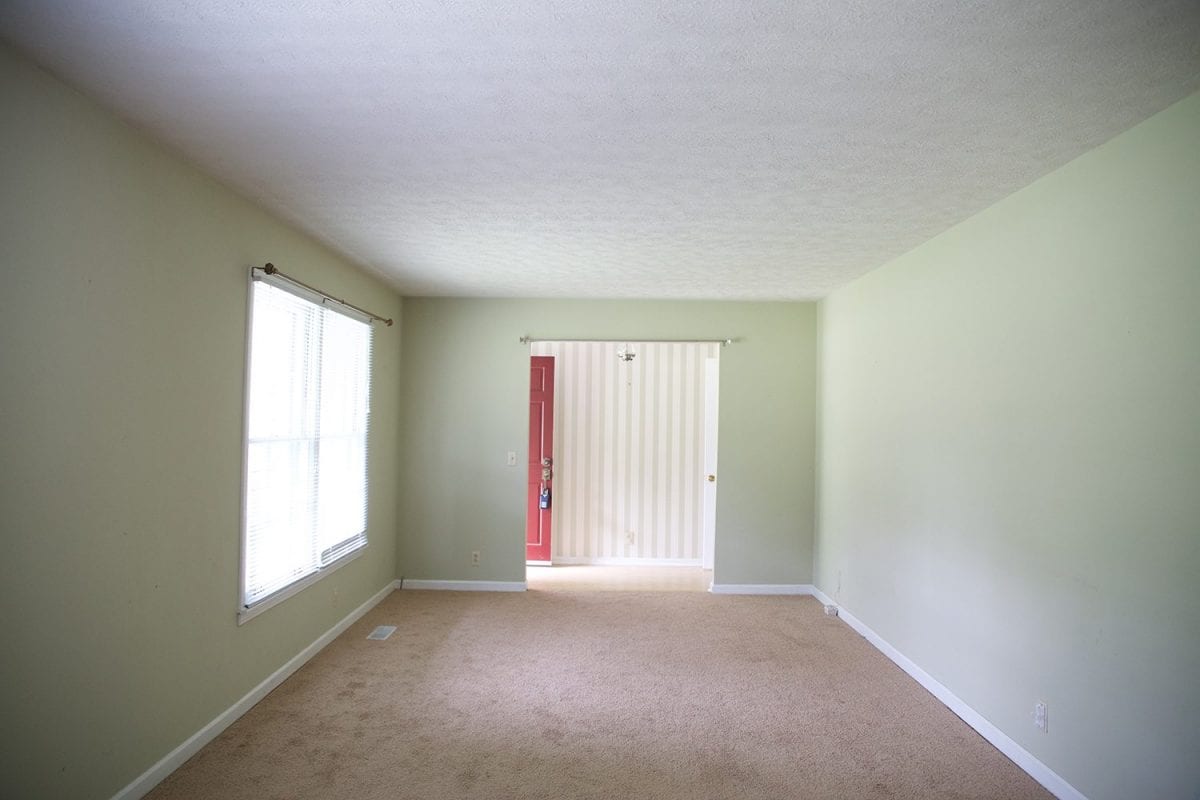 And off the now-existing formal living/dining room area, there’s a small kitchen.

At first glance {since photography tends to make everything look better and to each their own} some of you may be wondering why the great lengths. But the home is in need of a major update. {And basically, because we want to.} We took a big loss on our last house, but were able to get this house at a steal as it had been sitting on the market for some time which is unusual for Franklin since they basically have the opposite market. We were able to take out a rehab loan so that we can do the major stuff and get it taken care of, first. From old wiring and plumbing to faulty insulation and a sloping roof, it’s waaaaay overdue. And that’s not even touching cosmetic: The flooring isn’t really our style, and the walls bow in certain places, for starters.

The initial redo will include the main living area, basement {currently the garage} and upstairs.  It’s a true ranch/split level home, with a lot of potential. As it stands, it has 1700 existing square feet, so it’s a definite downsize for us. However, once we finish out the basement, we will have 2485 finished square feet. And we think that’s a nice size as we’re not the McMansion types. We’re anxious to get our hands on it and give it a fun new look that’s our very own.

We don’t plan on going anywhere after this, and we’re taking the time to do it right, from the bones up. This is something that matters to us, to get it fully up and running again, as unlike most of the homes in this neighborhood, our house has been through multiple owners and was neglected for some time.

I know, “this is our last house” – that’s what they all say. But we’re big nesters, and stayed in our former home for ten years. Only relocating completely rather than moving across town. We have big plans to keep the projects going for years a-la improvements, so this is just the beginning. We’re ready to make memories here, and really make it our home. 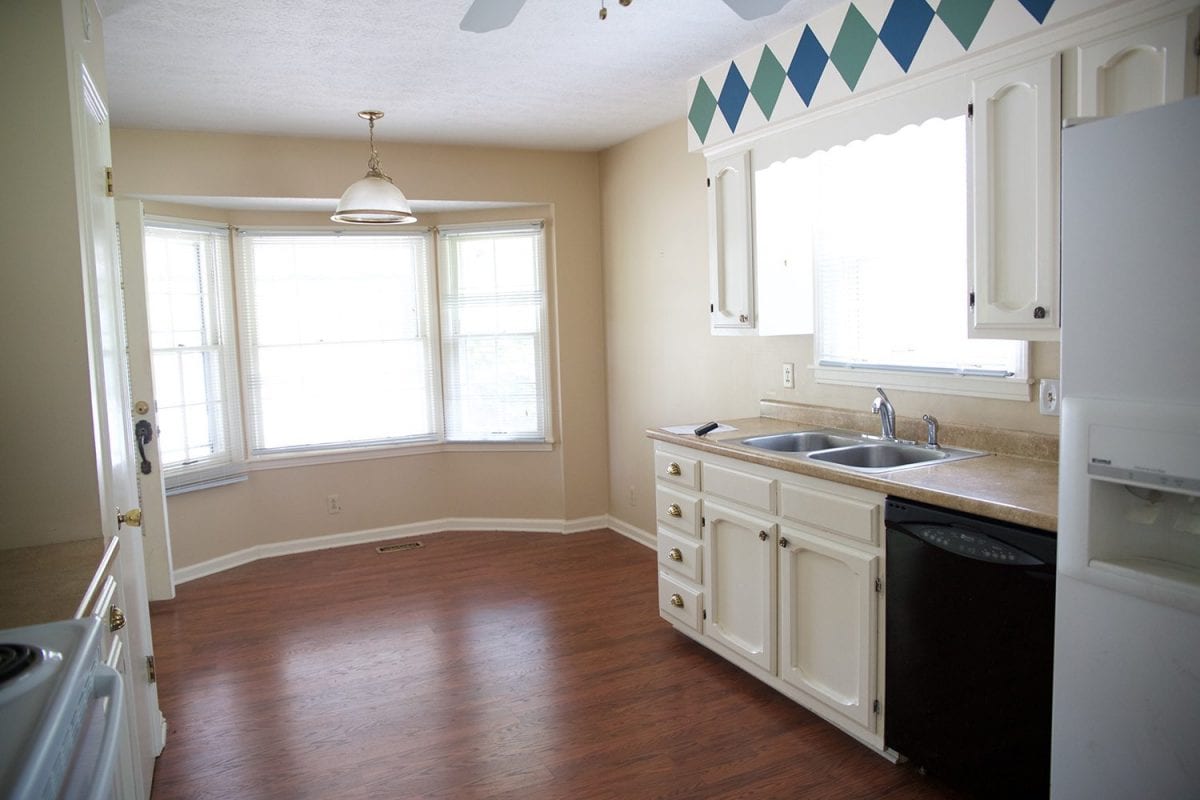 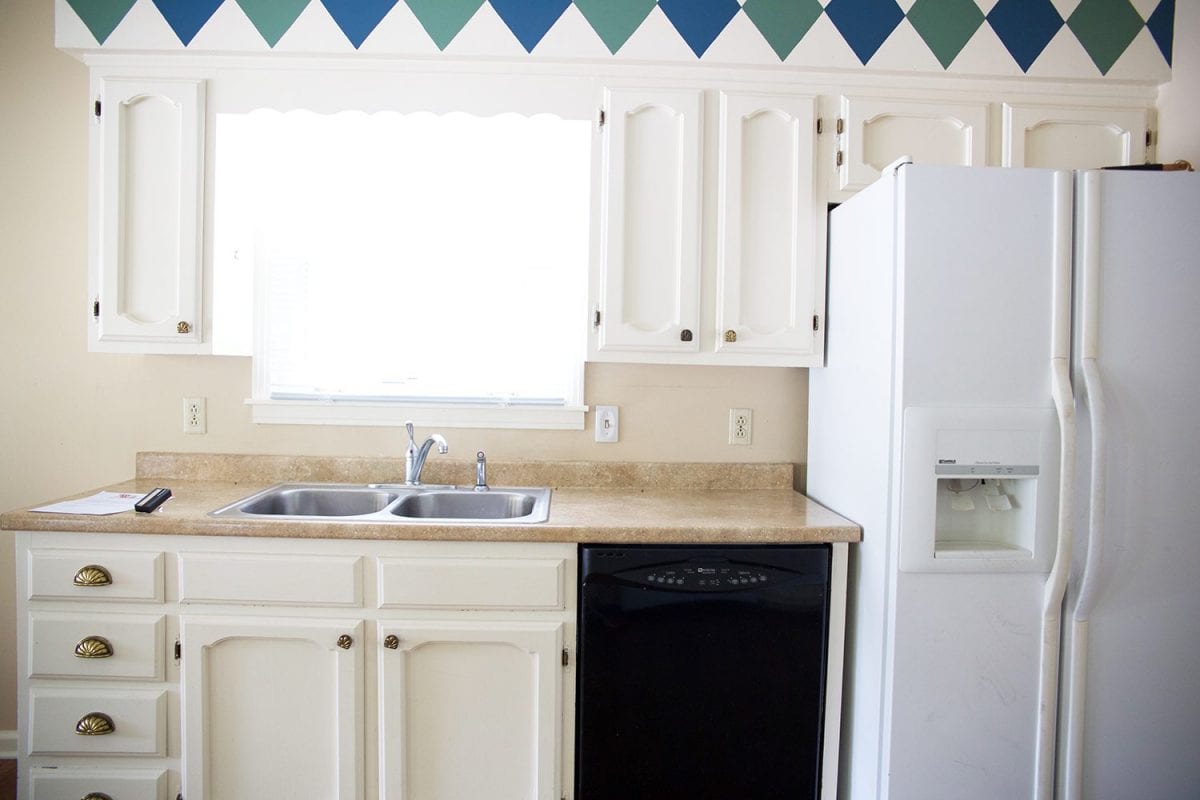 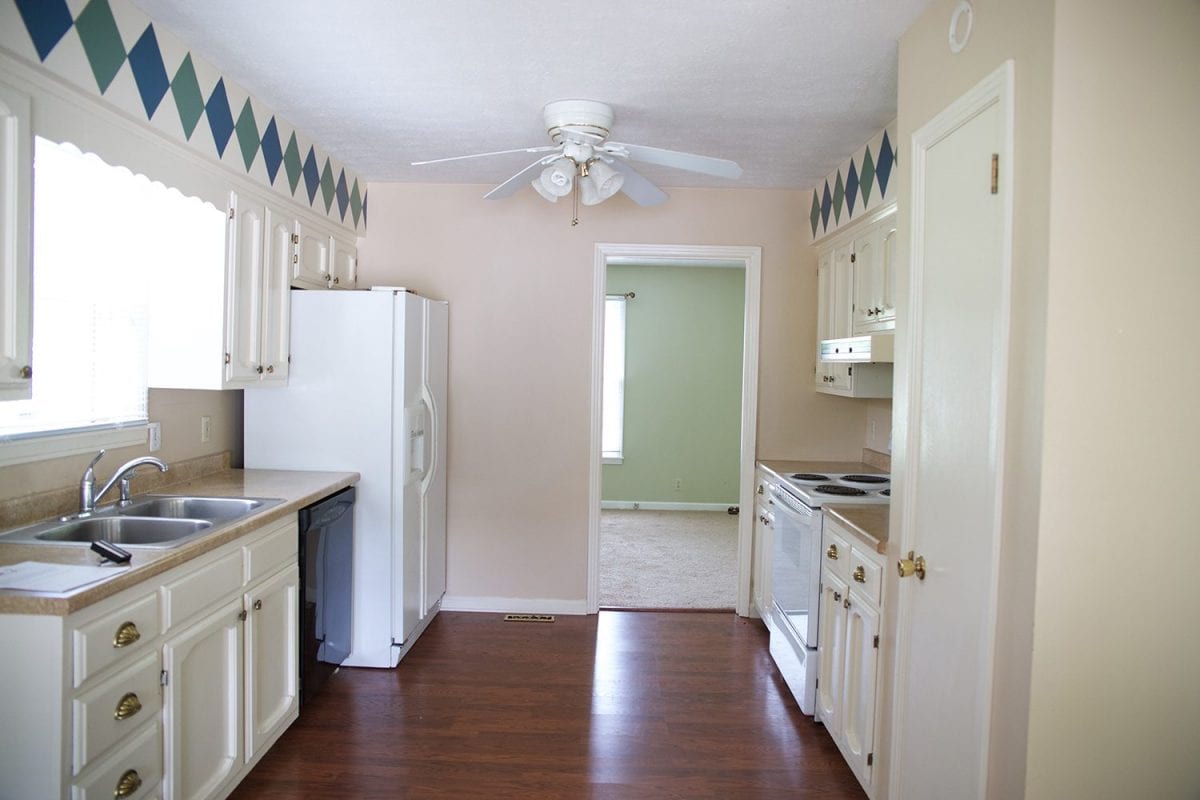 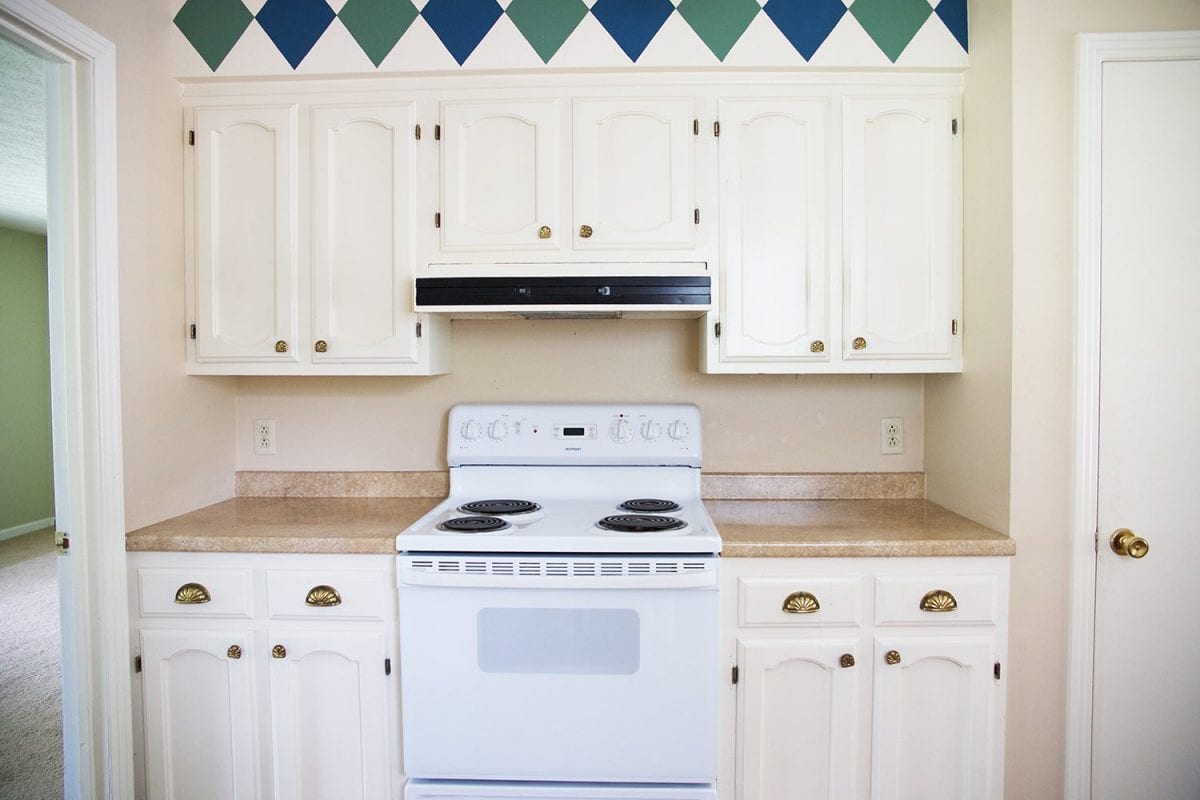 It’s a bit of a squeeze right now for a family of five, and there’s even a tiny pantry to the right, with our only access to the attic. On this part of the house, that is. 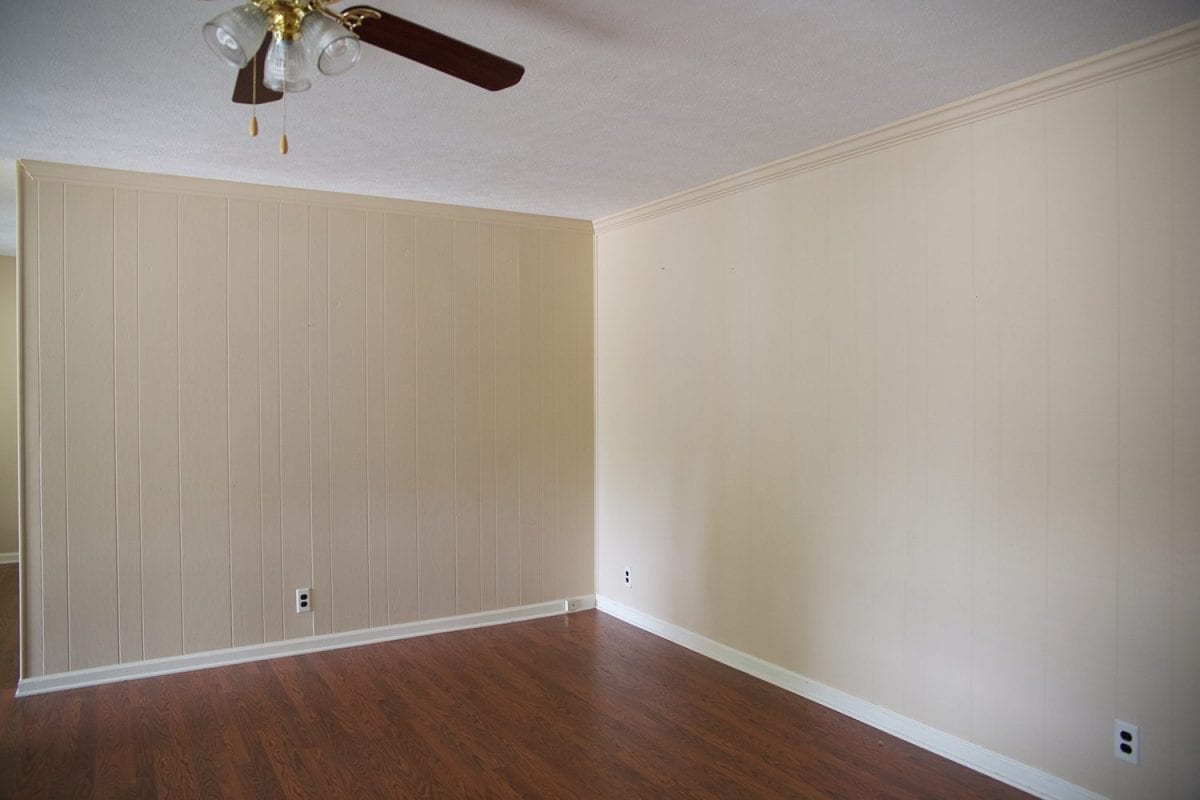 The “den” is on the other side of the formal living/dining area… where the paneling was painted at some point. 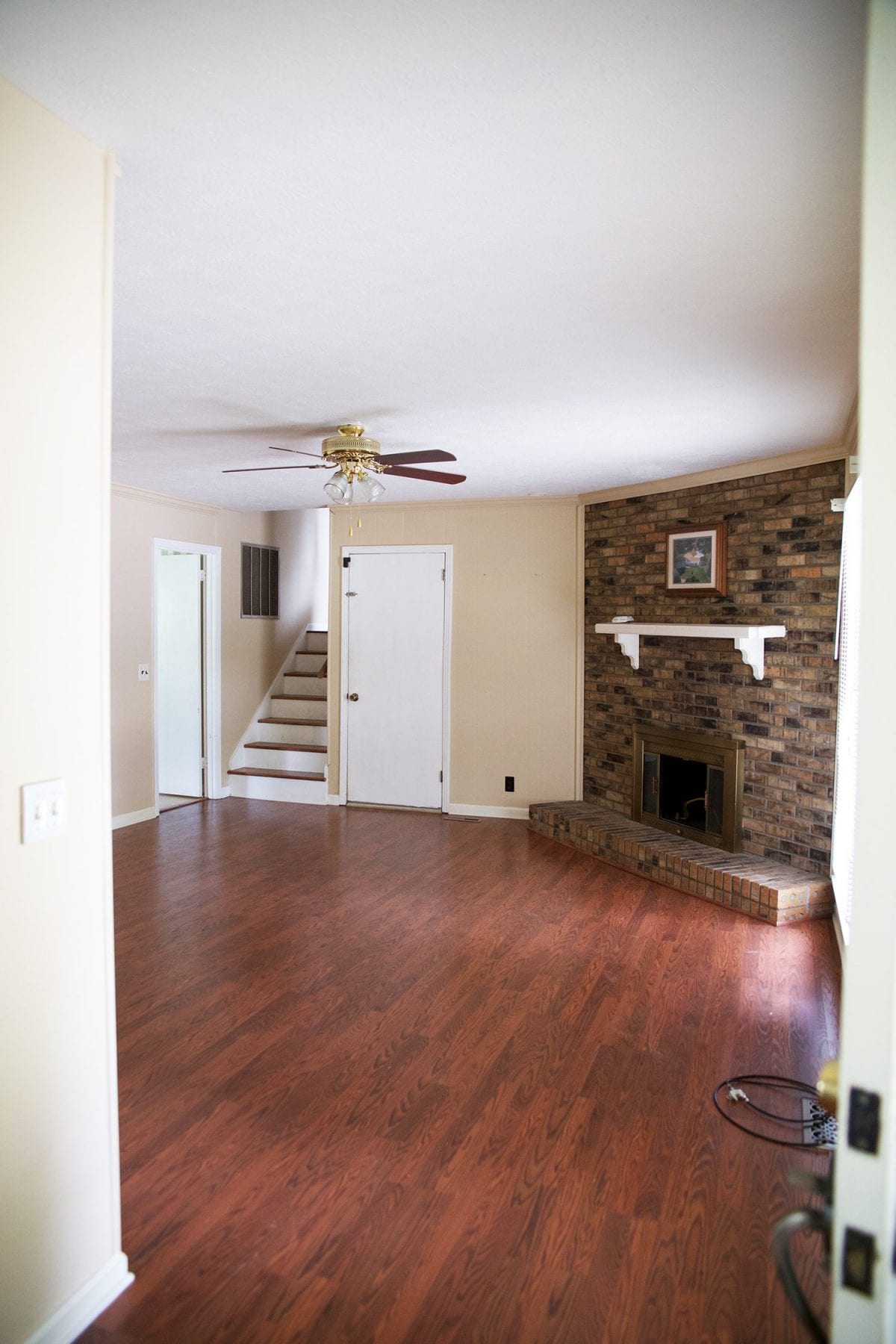 We hope to salvage most of the fireplace with a fresh look for the brick in a heavy mortar wash and new mantel. There’s something charming about that little fireplace we want to preserve. 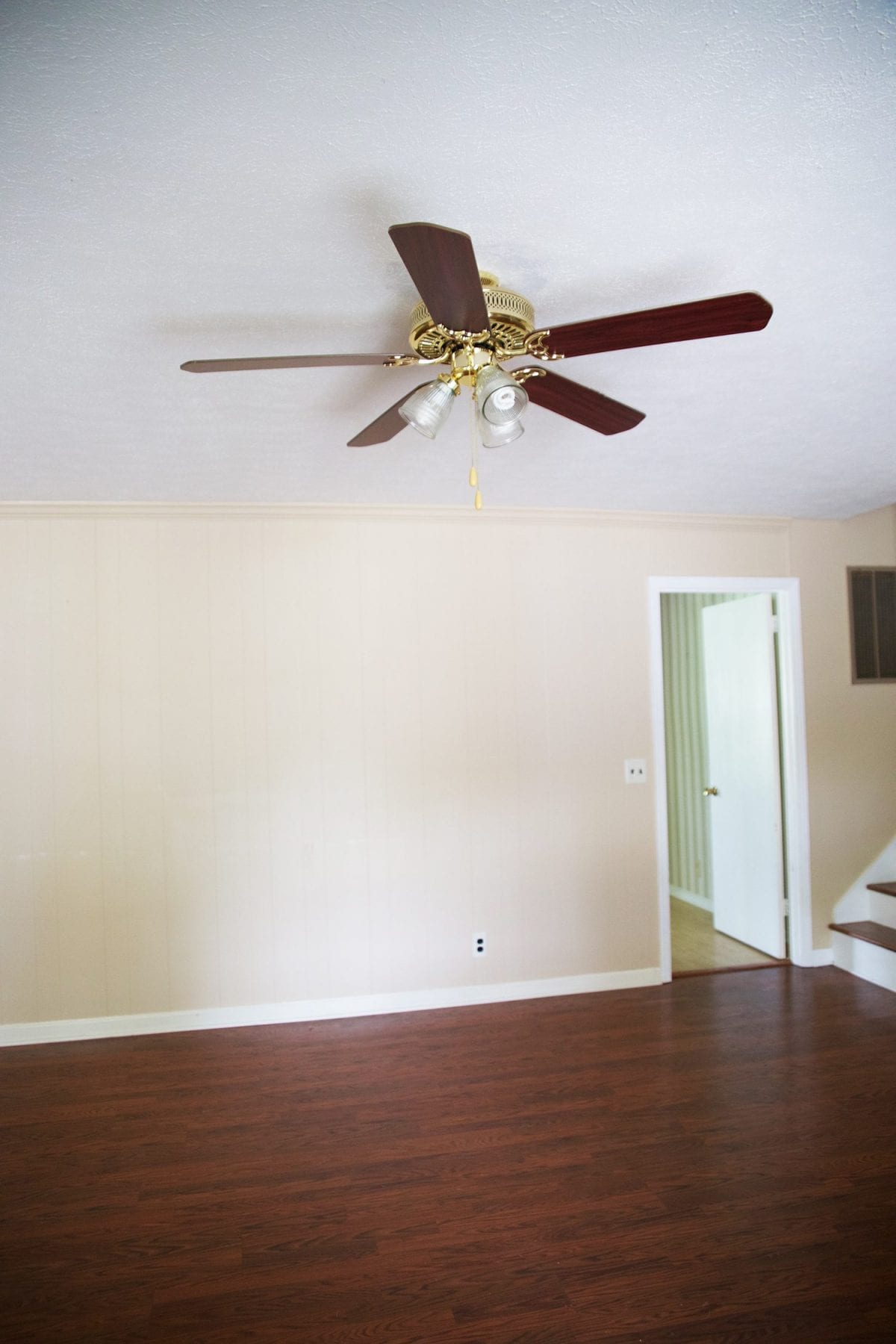 And here, the staircase that leads to the second part of the house. 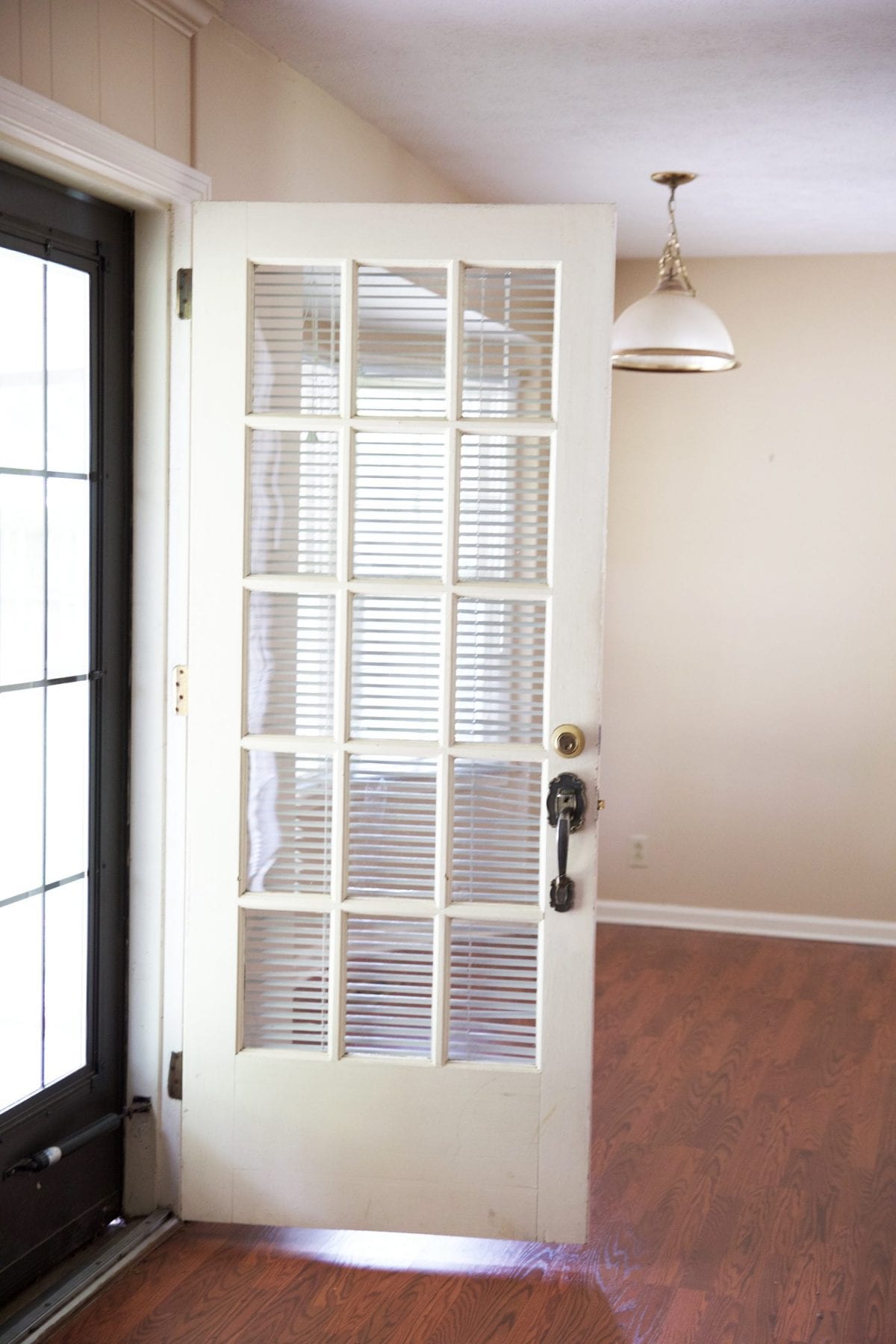 There are a lot of things we’d like to salvage for a hint of charm in the finished house, like this old door. It has sweet little touches in the handles, and I’m going to try my hand at stripping it down {with precautions taken toward the whole lead paint thing} We’d like to repurpose the quirky things that bring charm to this little house, and a nod to the past.

So here’s the existing floorplan in a quick mockup we put together: 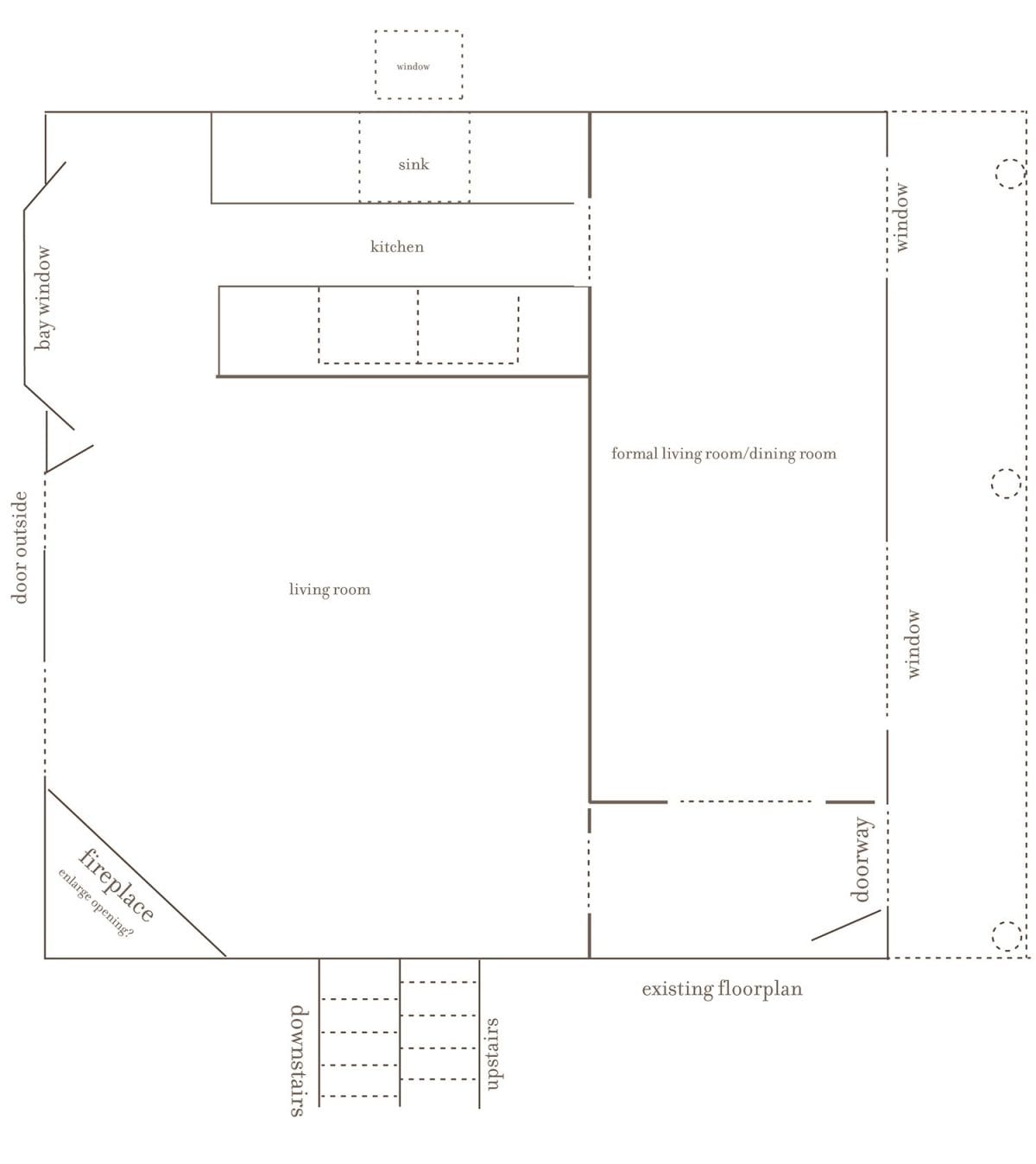 The walls will come down, for an open concept. The house is a classic a-frame, and we plan to raise the ceilings as well, so we’ll be running a false vault for support. This might be what we’re the most excited about, as it’s a major change that will give the home a whole new, not-so-dated feel. We hope to do hardwoods throughout, even in the upstairs area, for a nice, clean, classic feel and really unify the space visually.

We plan to stretch the kitchen all along that back wall, with the removal of the existing walls for a larger space.

In the center, we want a nice large island for a good gathering spot. We plan to do a lot of entertaining in this house, and as you can see, we will have ditched the dining room and separate living room completely, so we’d like to fully utilize this space.

Eventually, we plan to add a master suite off the kitchen, but that’s probably a year or two down the line because we wish we were millionaires and this is real life. So in the meantime, the kids will be in a shared space upstairs and we will be right next to them. They don’t mind {right now} as they have a big yard, pool and an entire basement that we’re finishing off so we’re milking it for all it’s worth before the oldest gets too old to want to roll with that anymore. We’ll be playing it aaaaalllll by ear. But more on that next week…

Of course this is just covering the basics: Both sets of staircases will be brought up to code as part of our initial redo, along with wiring, insulation, the entire nine yards. We also need new windows as the entire home is currently covered with storm windows and I’m terrified of fires and a plan for getting out because it’s how I’m wired and garden stools can and will kill you.

Tada! This is just the beginning.

We have big plans for the other areas, and can’t wait to share those as well, as we go! 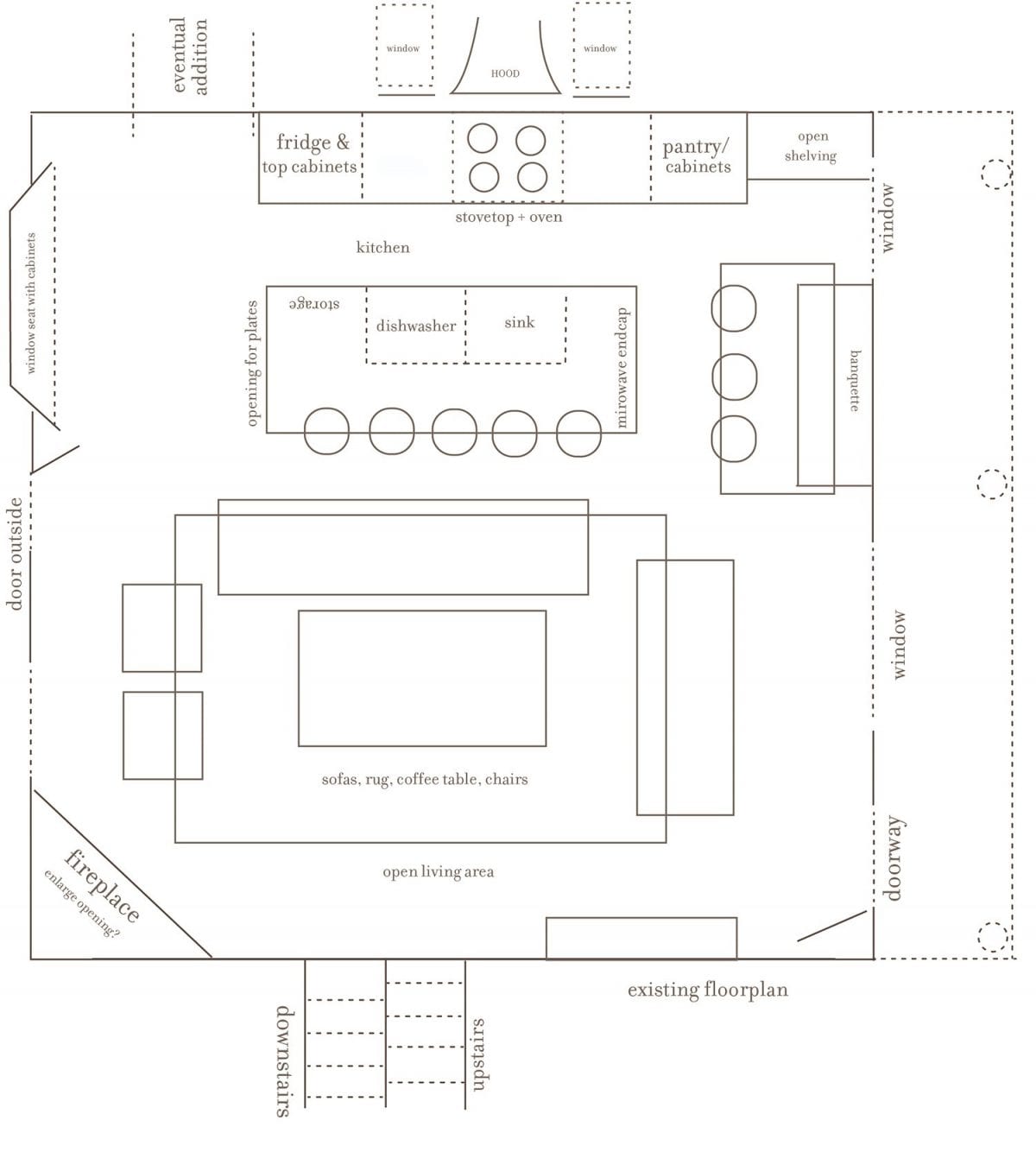 So these are our first set of initial plans for the main living area. We’re busy picking out finishes, and the DEMO STARTS THIS WEEK!

{Psst: to keep reading about the renovation and see all the amazing after photos go here and scroll tot he bottom.}