You are here: Home / the money pit / how to hide your tv over the fireplace

I’ve never really understood the phrase, “You can’t have your cake and eat it too.” I mean, I get it. No worries. It’s really not that hard. I just don’t like it. I think it was poorly worded – maybe just a badly chosen metaphor. Someone should notify the writer. When I was younger, I was all, isn’t eating your cake essentially having it? I mean, what other way is there to have a cake? GET in mah belly! DUH. 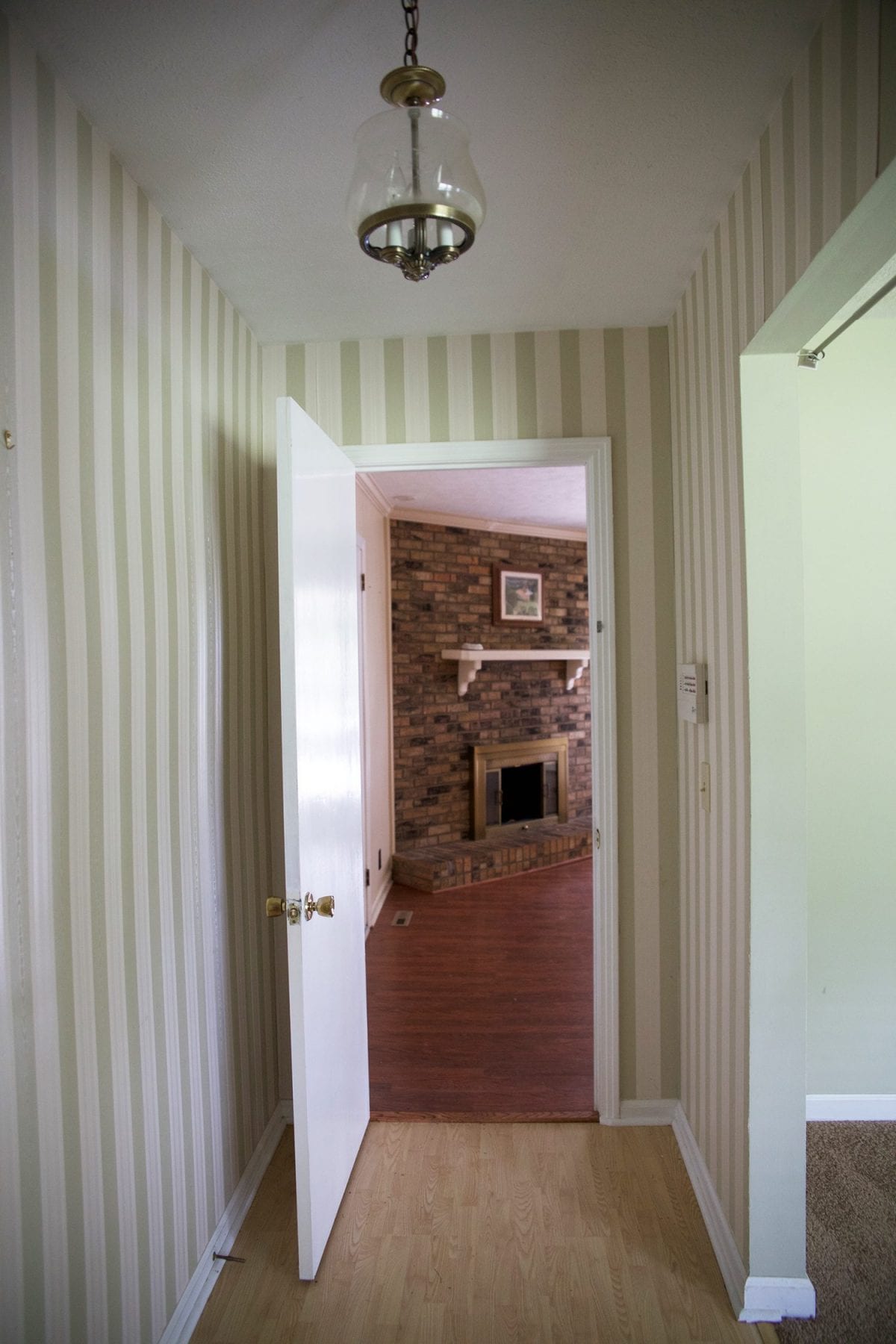 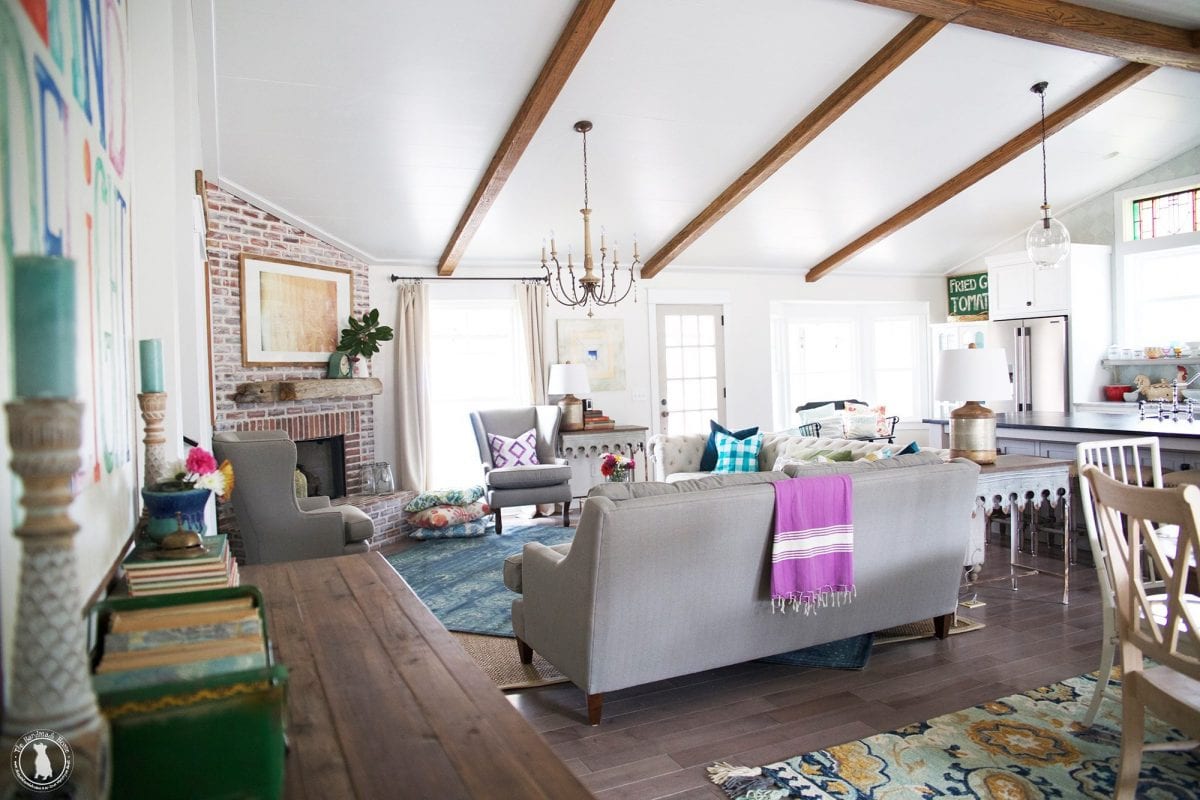 But this fireplace, kind of felt like that. Attempting to have my cake and eat it too. Because this was the conundrum of all conundrums when we found the house. I think we fussed over this little corner, the most.

First, we wanted to salvage it. Then, when we knocked down the drywall, we realized it really wasn’t that secure because I guess the standards for 1976 construction weren’t that high. And the proportions were off anyway, so whatevs. And we needed a new firebox.

Next, when we went in to knock it down, we found damage behind it in the roof from years of leakage. Jamin wanted wood burning, but I knew the only place to store the TV much to my dismay, was over the fireplace. And our concerns were that it would make it too hot. 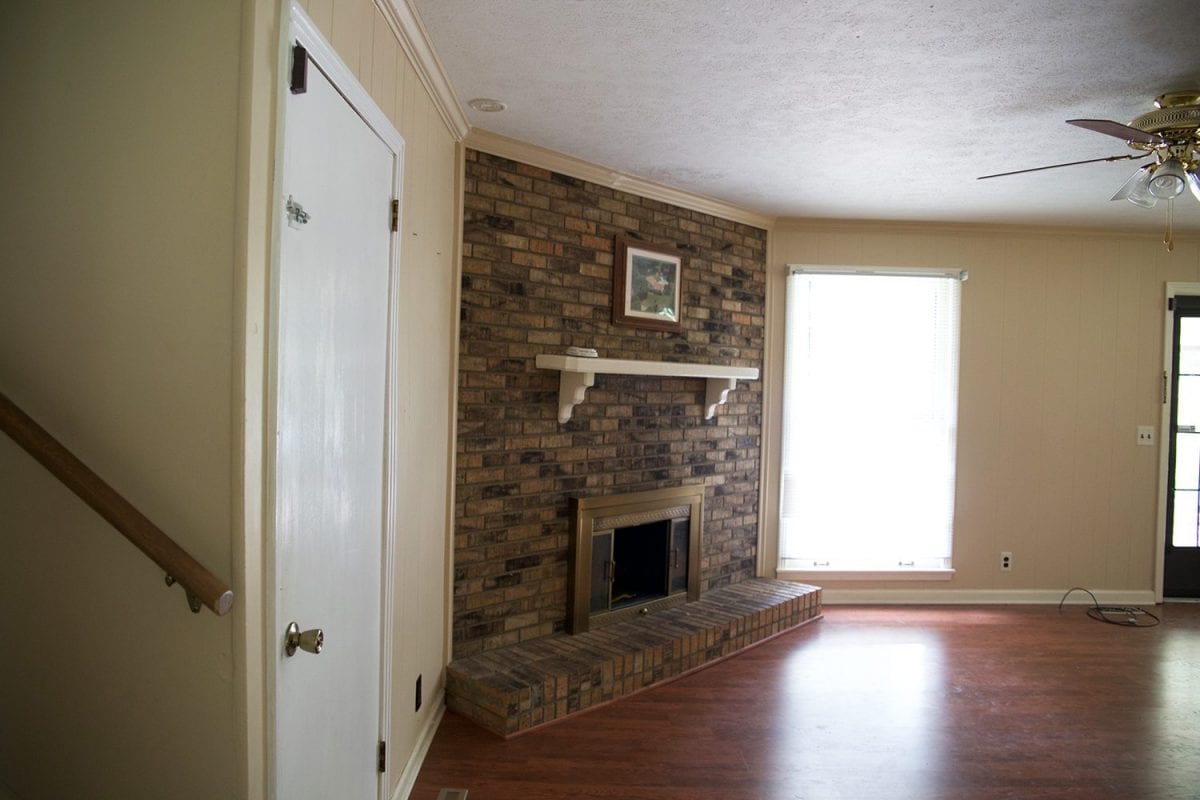 As it turns out, Jamin is not Paul Bunyan ’cause aintnobodygottimeforchoppingwood. And we would have to reconfigure the roof to work for a new chimney. And budgets are a thing. As is my tendency to go all If You Give a Mouse a Cookie when it comes to all the details. So here we were. Our happy compromise. We decided on a gas burning {PS, we’re SO glad we did, because with a flip of a switch we had a very warm house all winter}. Also, allergies. I know. To each their own. 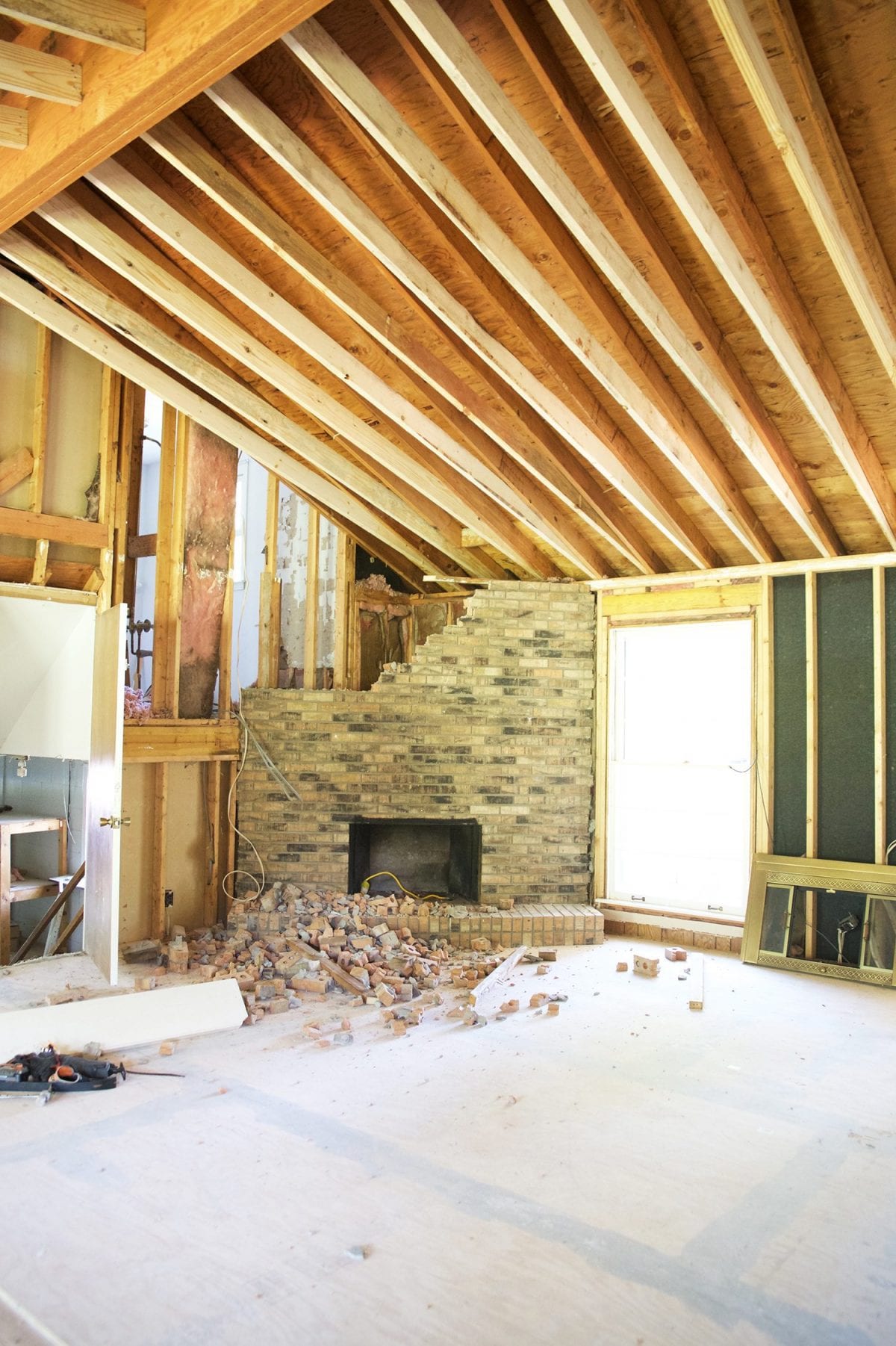 We also ended up going for a mortar rub brick for the entire fireplace area, along with some reclaimed barnwood for the actual mantel portion I salvaged at a local store. 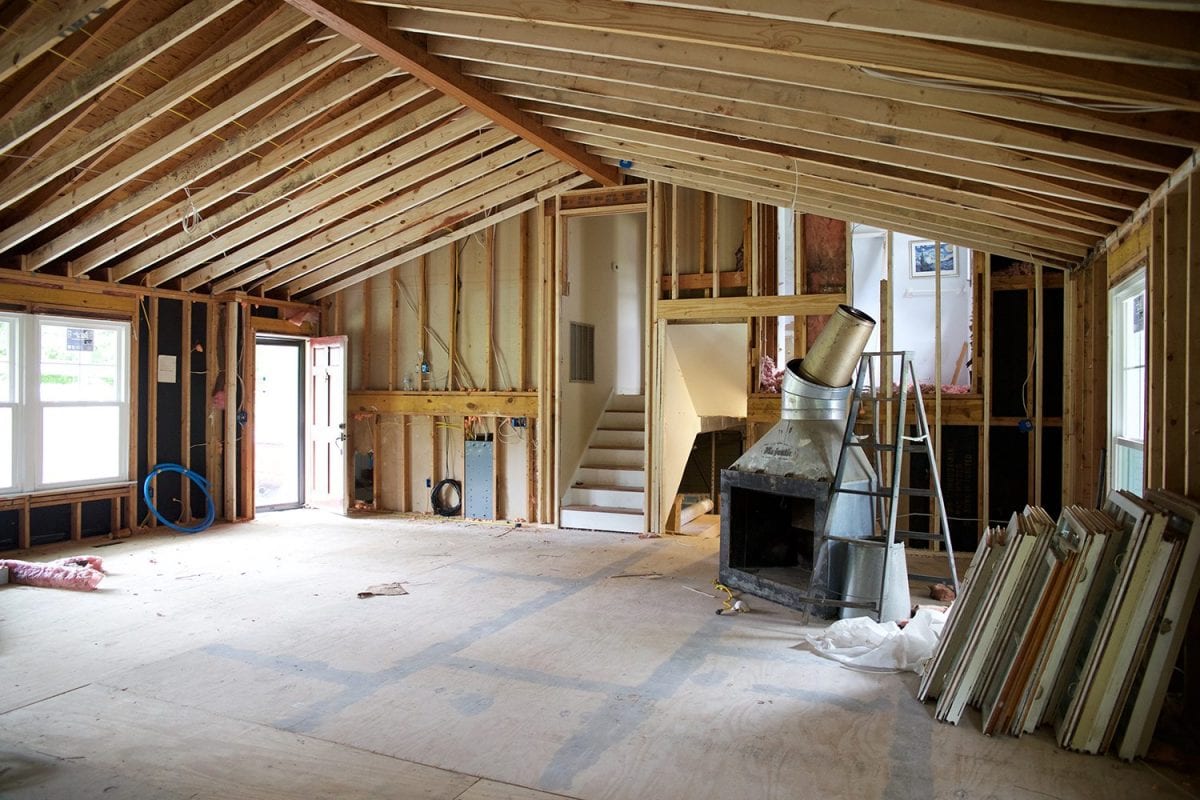 But, back to the TV part, because the only place one, was over the fireplace. DUN DUN DUN! Cue the sketch drama music.

We all have things about houses we don’t like. This rise in TVs over the fireplace trend has been mine for a while. It’s more function than form and stuff. I’m also an artist so I believe that the placement of things over the mantel should be reserved for the holiest of holies: good art or sentimental elements.

Imagine my dismay when we knocked out all our walls and I fought it for a while, because I knew the inevitable was coming: TV placement. The irony isn’t lost on me. 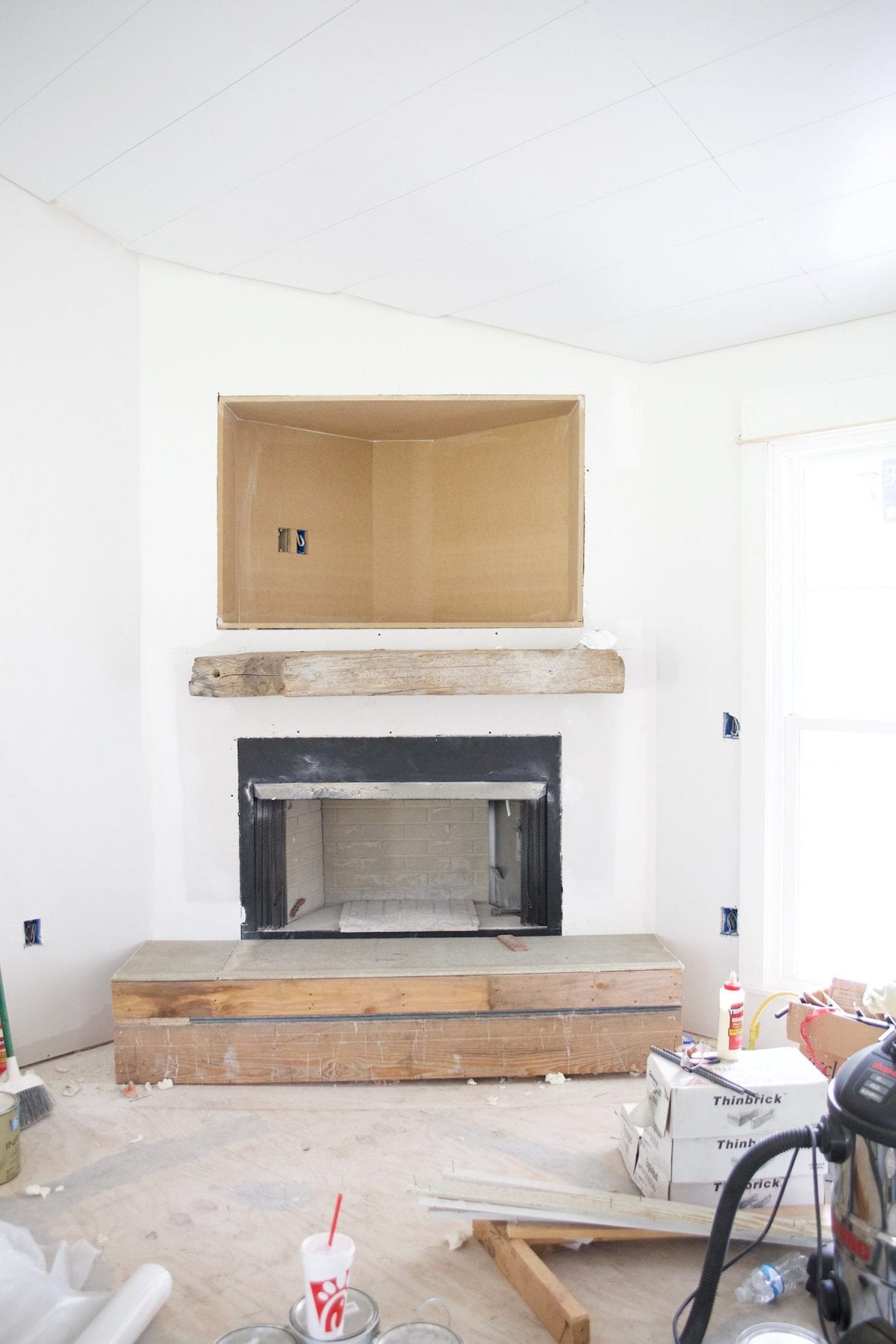 And the only place, was over the fireplace.

It was time to eat crow, I mean my cake. 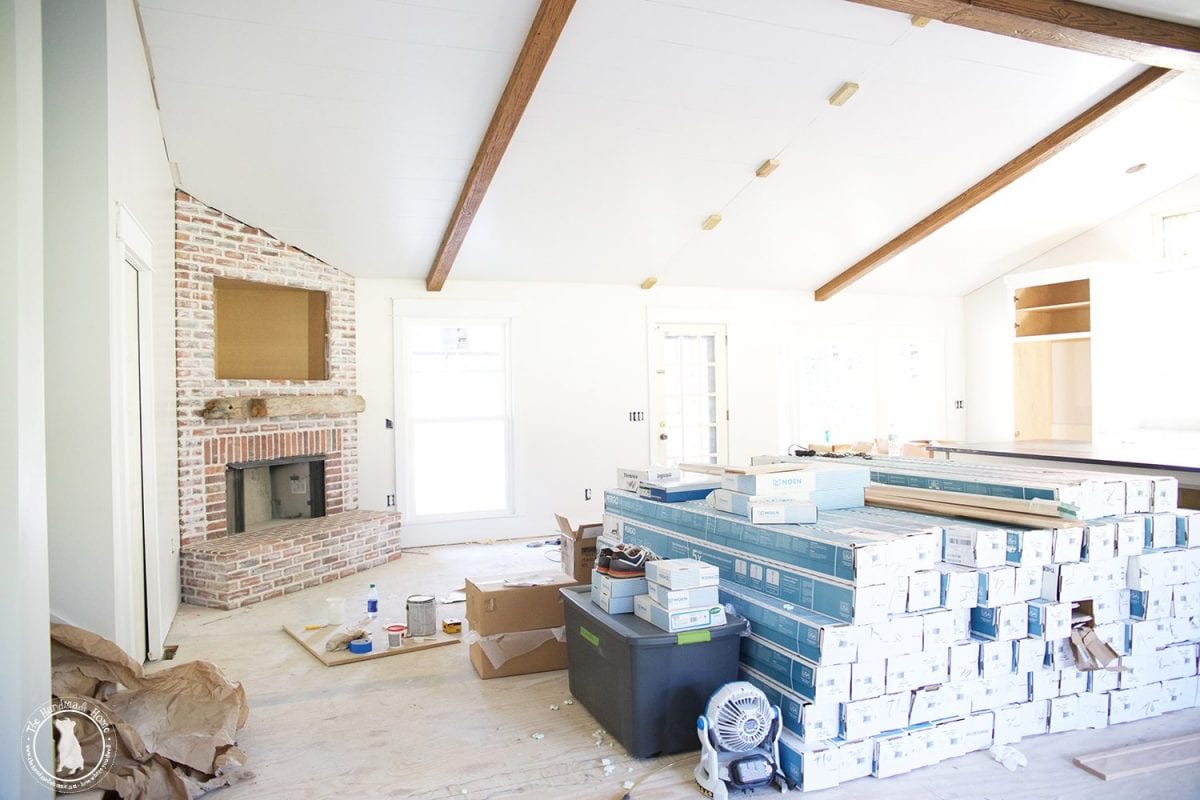 So we decided to recess the area over the fireplace, instead.

When we had our greatroom reveal, I think too much had been going on, because I didn’t accurately cover the whole TV thing. Someone asked if we just didn’t have one. And so today, I thought I’d go over what we did to conceal all the things, and still have a pretty mantel. OH MY WORD are you still with me? Longest rehash ever. 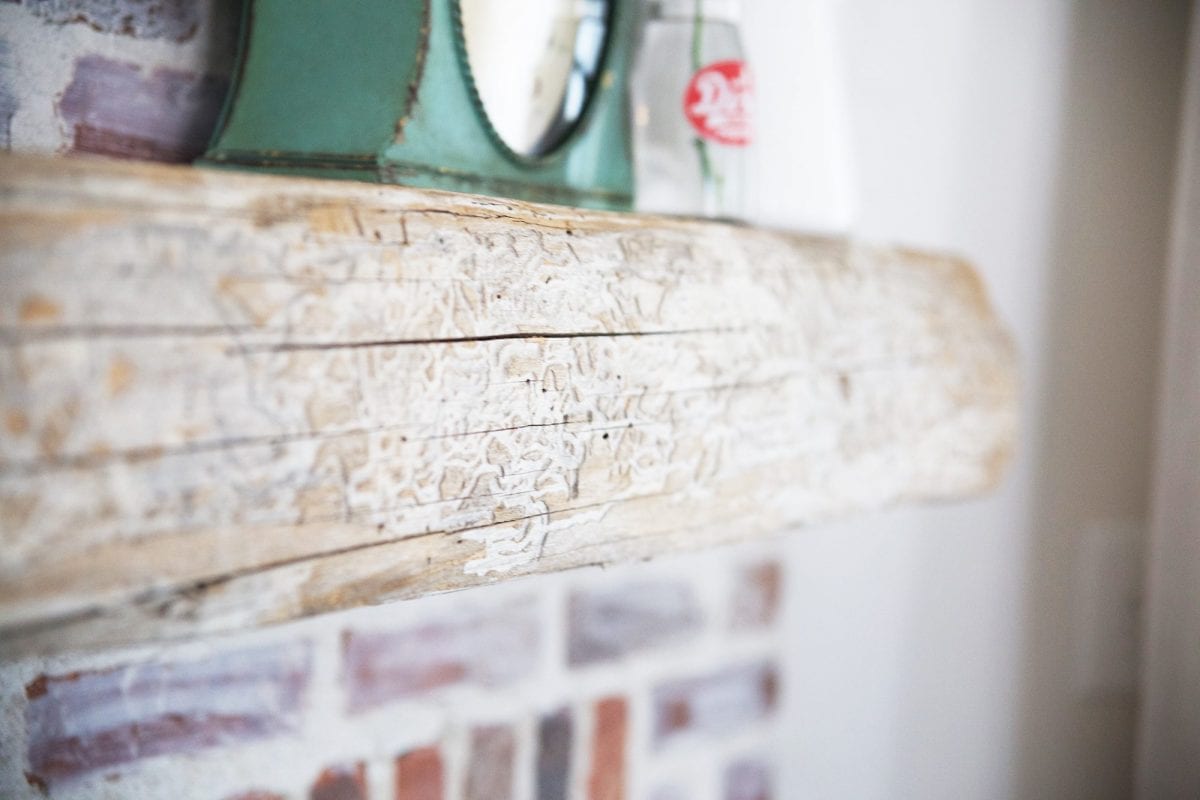 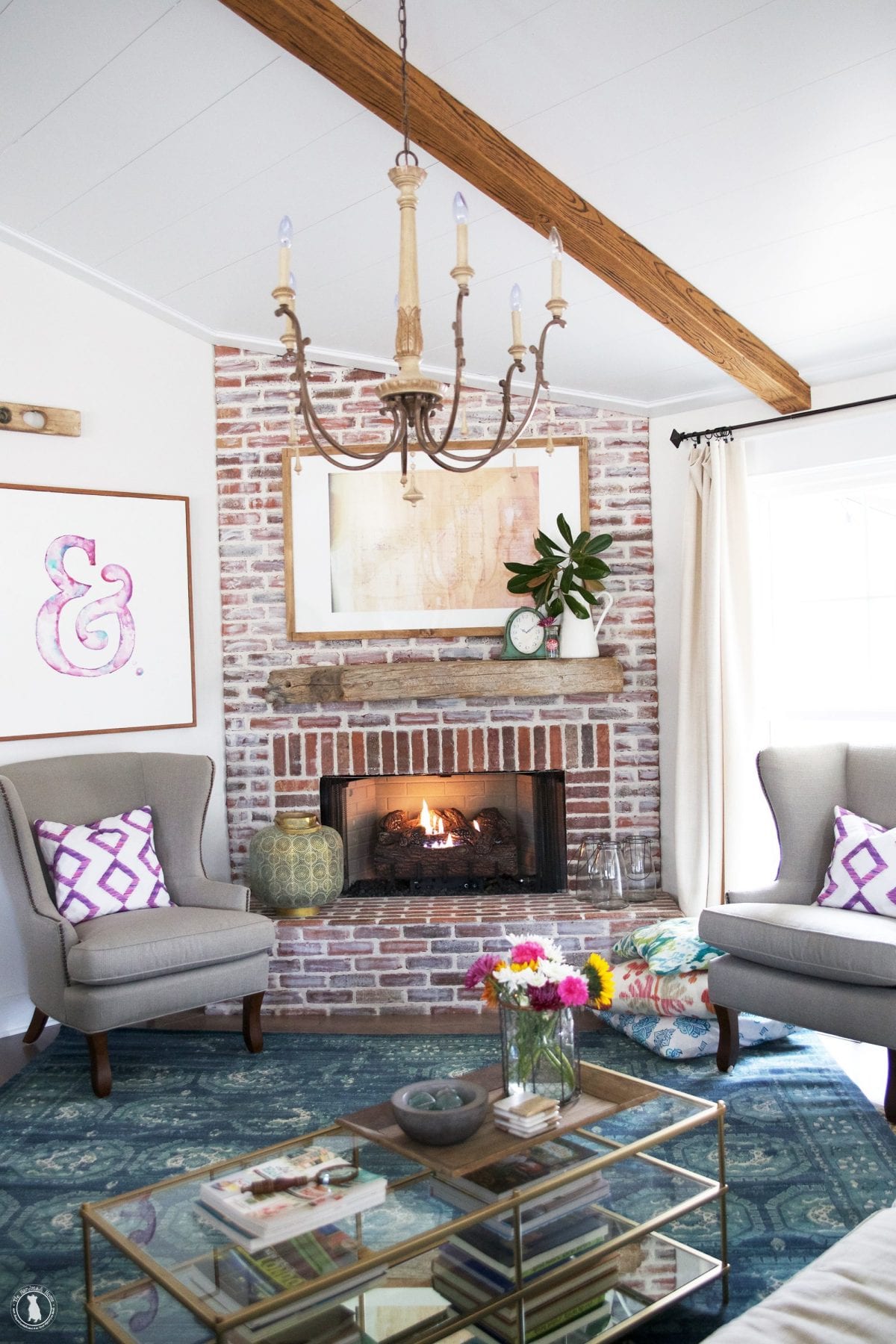 The TV is actually here. As much as I’d love to be a person who has the restraints to go without a tv in the house, I am not because I don’t care. Therefore, I have a tv. It’s just placed behind some sentimental art. {There’s more about all of that, and why we chose what we did, here. And how we built a frame for it {with lots more how-tos here}}.

We basically just recessed the TV when we rebuilt the mantel, and then made sure our art was big enough to sufficiently cover it.

It’s really so simple, we should be embarrassed that we’re writing about this. Here’s what it looks like when the art is removed {keepin’ it real} 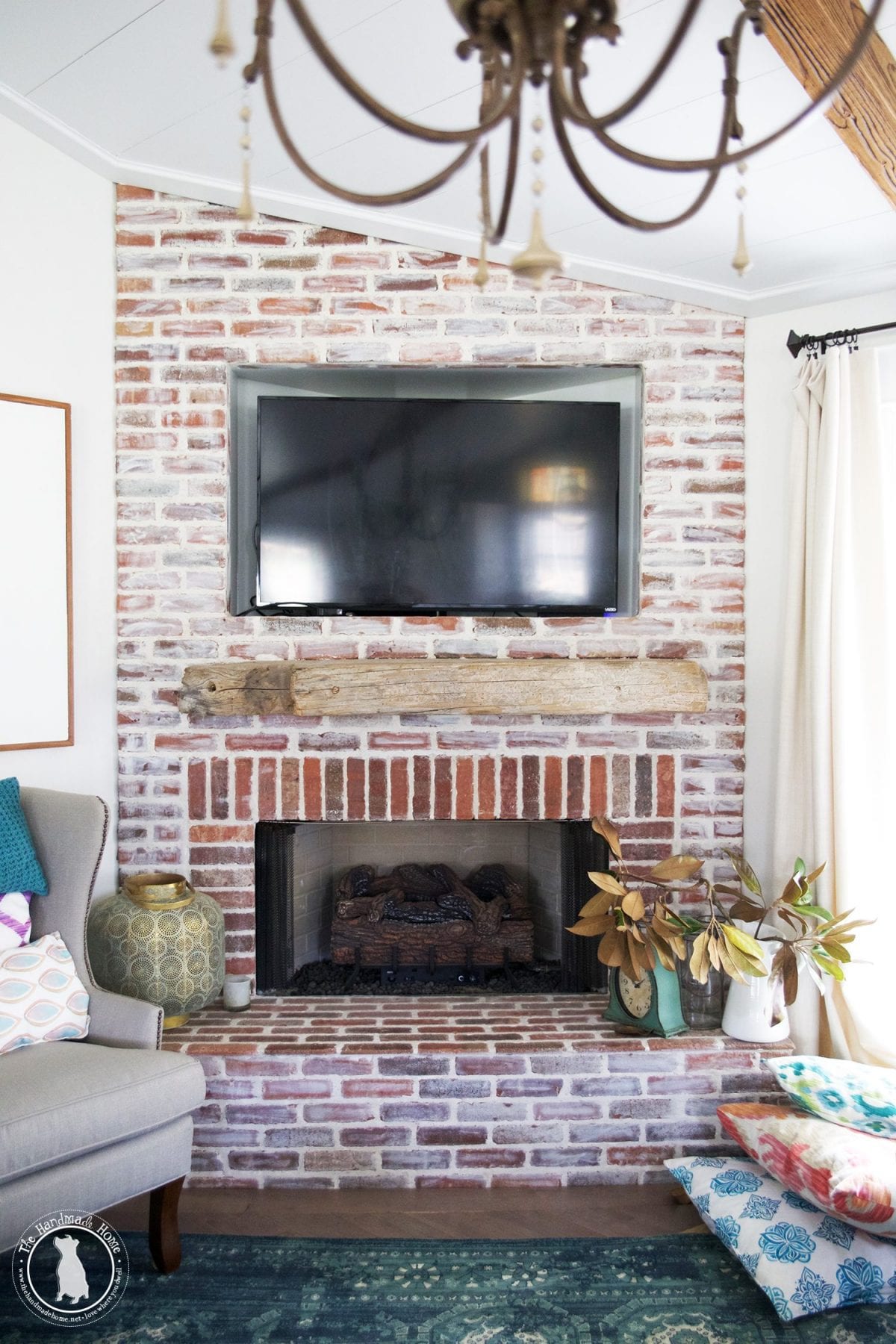 The recessed portion is large enough to hide our cable box, apple tv, etc. etc. And all the unsightly things. We’ve never enjoyed it more. 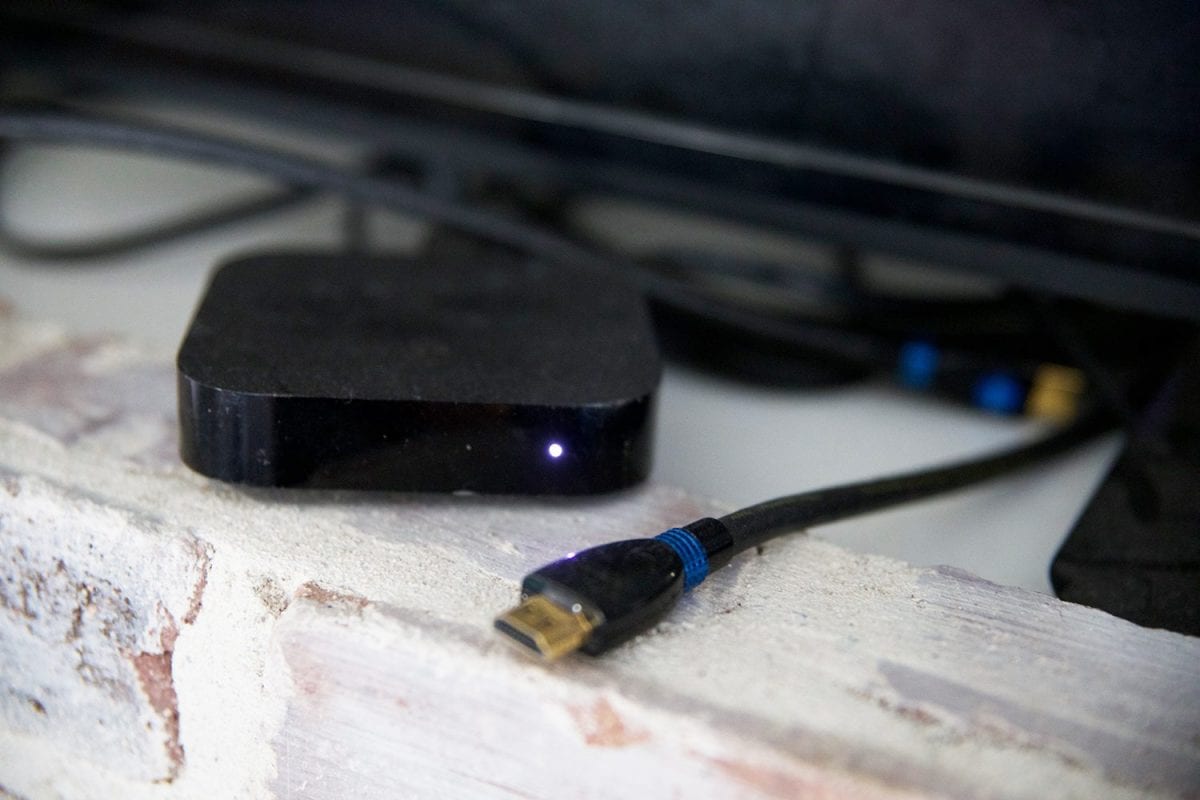 We just added two anchored screws discreetly in the brick on each side of the opening like so: 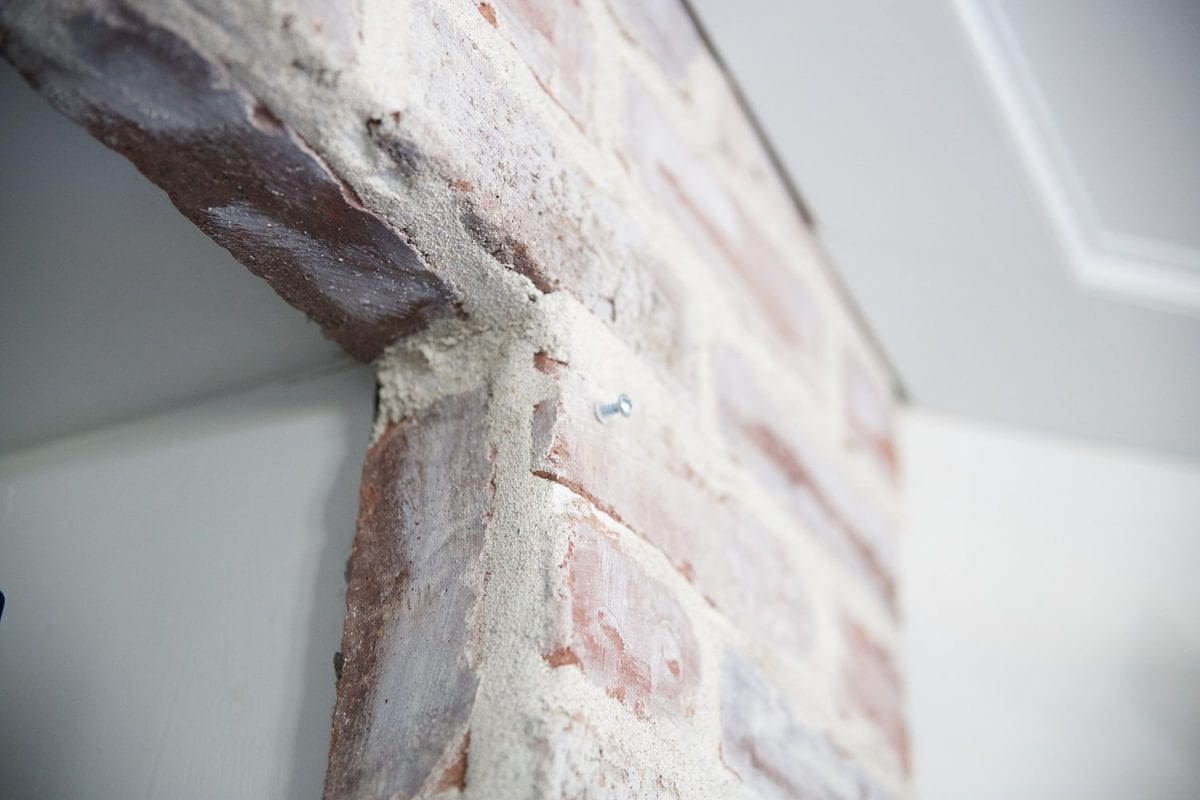 And hooks appropriately placed on the back of our frame.

So it goes right in place when we’re feeling kinda fancy and don’t want our TV showing. 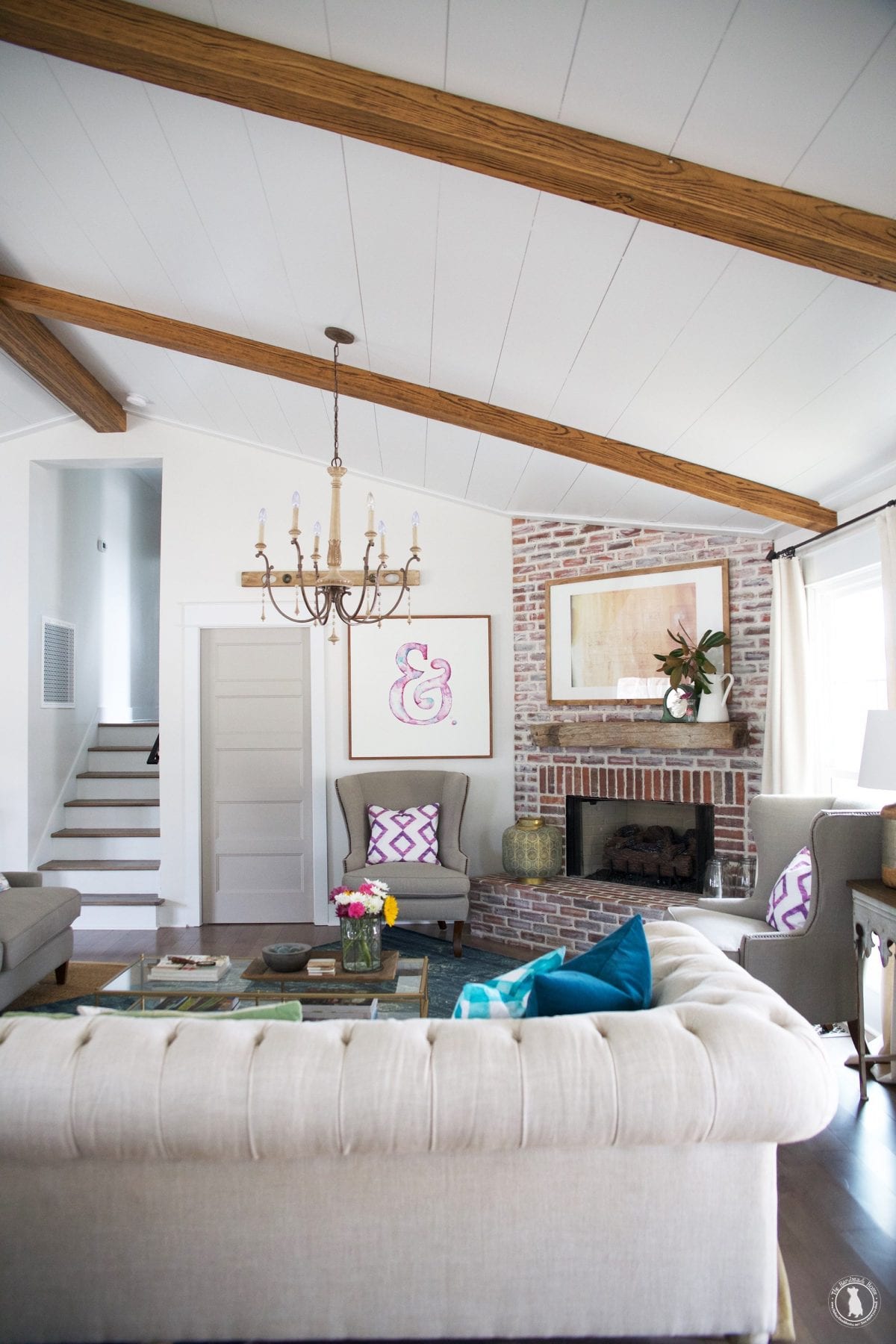 Originally, we wanted to hinge it so it just opens like a door. We may change it to that eventually, but we were concerned with the weight of the frame and preserving the brick with minimal damage. We don’t mind just removing it when we don’t have people over and watching the teli.

It’s really simple. But a nice compromise. Yes, it does require one going the extra mile to actually move it. But it’s worth it in my book because we have a lovely little area when it’s not in use. It takes two seconds to remove and place back. And helps not singe my corneas. I’d rather look at my sentimental art, instead. 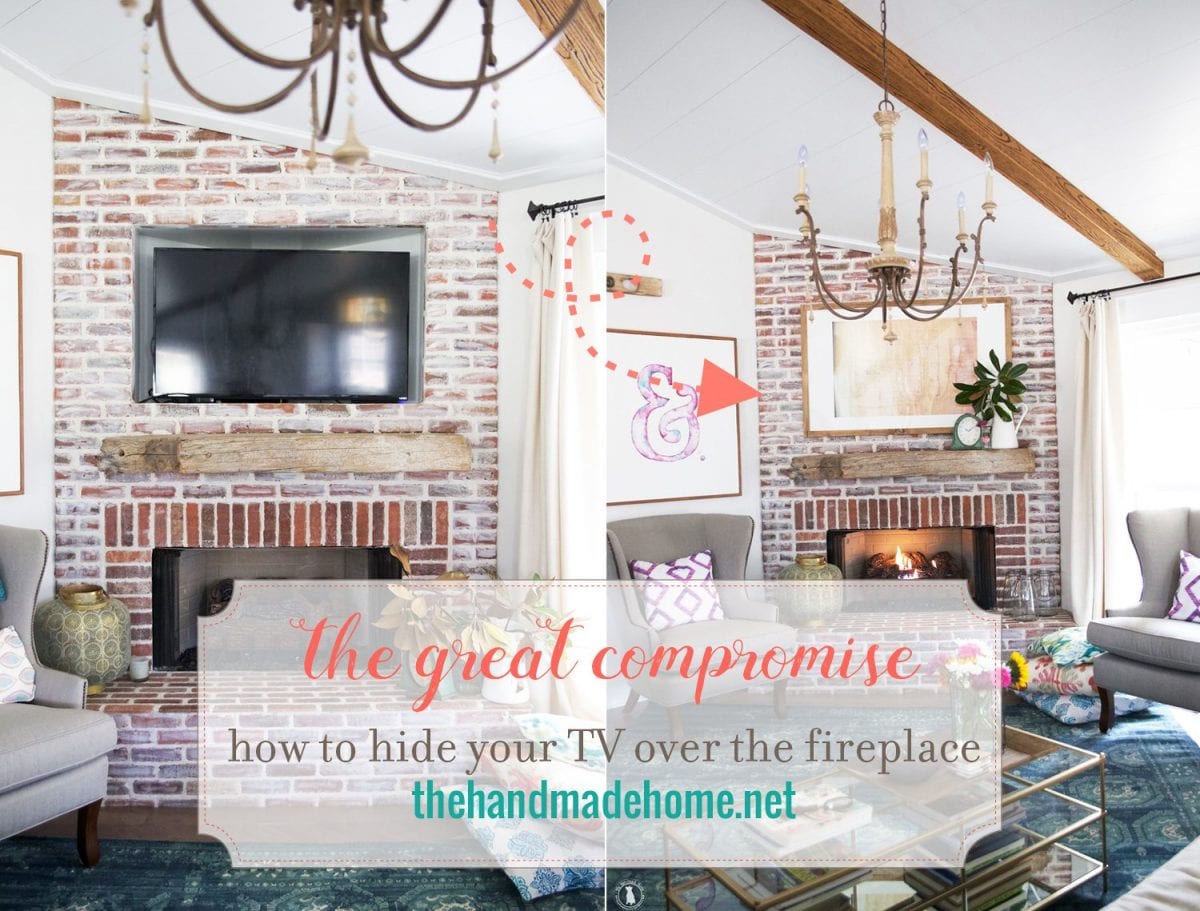 We hope that helps clear up the confusion. This is what we did!