You are here: Home / for the home / simple projects : a place to start.

I recently received a fun message recently from an awesome reader. It went a little something like this: Kelly said: “…what’s a good, simple, statement-making-starter project that you could recommend? I am feeling inspired, and looking for somewhere small to start. I want to go for it, but I’m not sure where to begin. Also, could you tell us more about your kitchen chairs? Love them. Thank you.”

I thought I would include two little projects in one post, because I think they’re both a good step by step kind of place to begin…and while one is small, and another is a smedium {that’s small to medium in my world} task to undertake: they’re both simple, easy ways to make a bigger bang with your buck, and bring major personality into your home.

Readers {Jamin would like to add, husbands} be forewarned: looking back, I realized that these two seemingly simple projects were the catalysts of bigger changes ahead…the first items to go in the living room and kitchen that made me press onward for bigger transformations. I loved them so much…it was like eating chocolate. I just couldn’t stop… 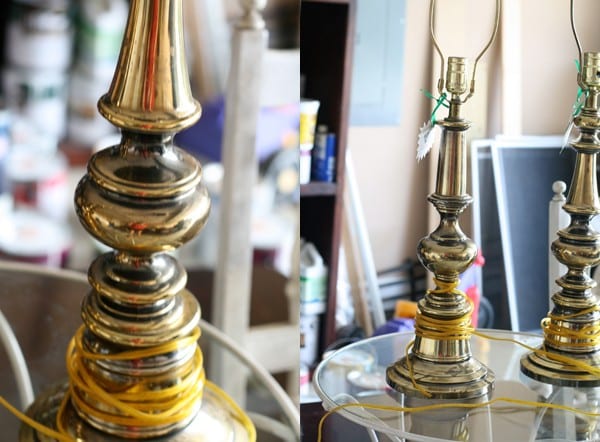 I scored these great 80’s-esque brass lamps at the flea market about a year ago for around 20 dollars. I wanted to bring symmetry to our living room space, as I thought it would be something easy to unify the room. The brass looks better in the photos. They were severe. {As mentioned above, this was before the big living room overhaul of 2011} But I refused to drop around 100 per lamp, for the unique look I wanted. I spied these at the local flea market, and decided that even though, if you look closely, these lamps are slightly different, I kind of liked that about them. 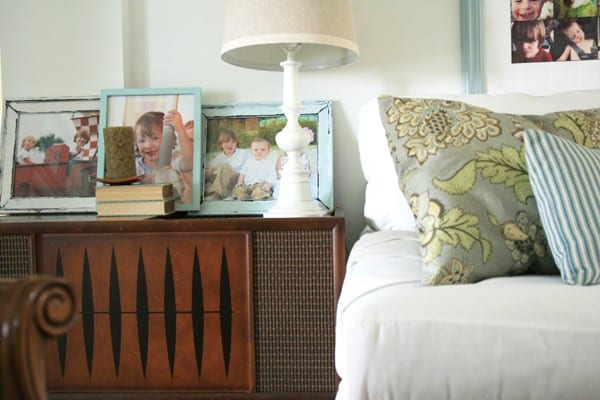 So I busted out the krylon…And went to work. If you’re an avid blogger/reader/DIYer, then you know how we lurve our spray paint. I simply taped off the top most part, making sure no paint entered the bulb socket…and the cords. This way the switch part was still painted white, right below the shade. I started with primer, and after testing out the spray paint on a separate surface, went to town. I always follow this rule of thumb: I’d rather do two coats of thin, than one coat of gloopy. It may take a little more effort, but its good to avoid drips.

Think in terms of operating like a crop duster when using spray paint. Simply let it dry in between, and you’ll know when you’re done. TADA! Topped with some simple shades from Target, this easy afternoon project spurred the rest of our living room redo. I was ready for lighter tones and a new aesthetic. 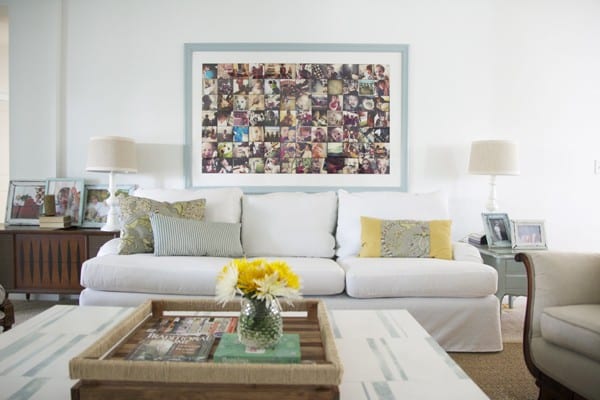 Project two: our kitchen chairs. Once upon a time, I had these banana bark puppies. 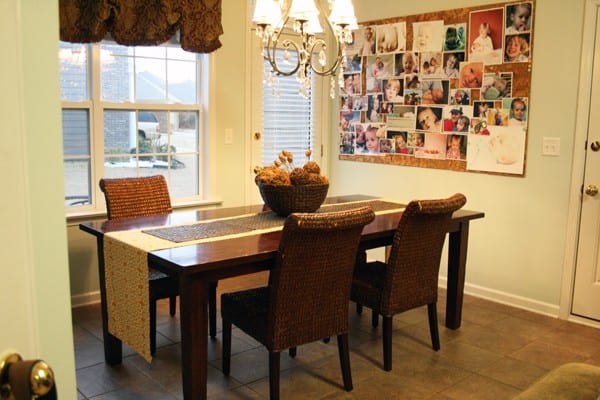 That was fun and all, but then we had two additional children, bringing the grand total up to three in the offspring arena. Hello…cracked chairs and nasty food morsels galore. Not only did I want something different, but if there’s one area in my home that’s going to get pummeled, it’s the eat in area of my kitchen. And I needed some chairs and surfaces that could take it like a boss. 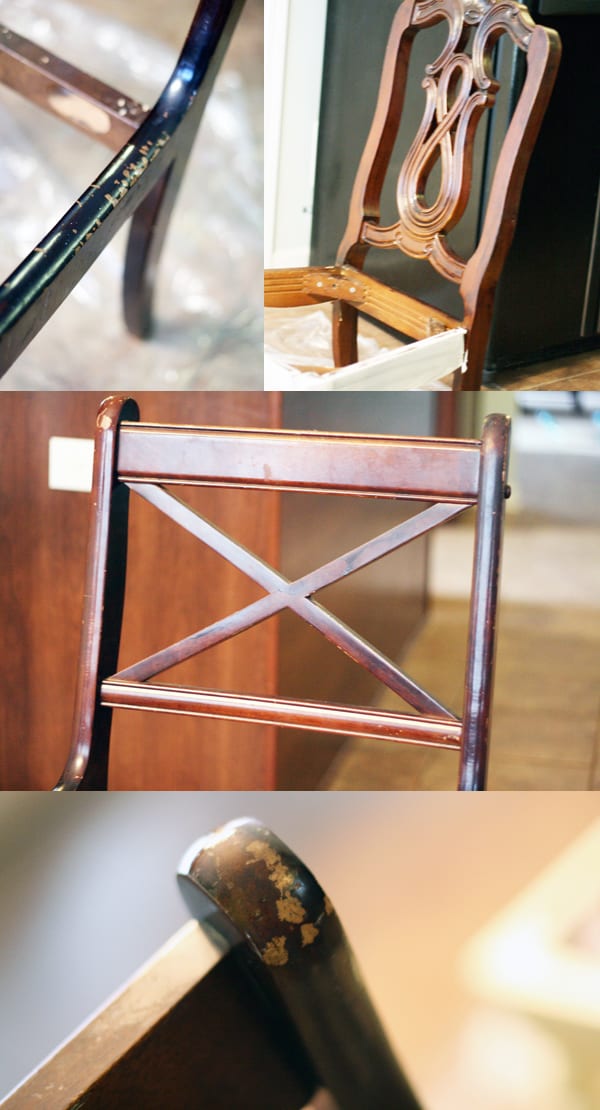 So I stalked the local flea markets, and for some reason, single chairs that people were willing to break up from a group, that were actually sturdy, and had interesting shapes…and didn’t cost 60 bucks a piece…were kind of hard to find. So I searched…and searched…and searched…and came up with these. At around 15 dollars each. Sweetlemonadescore. 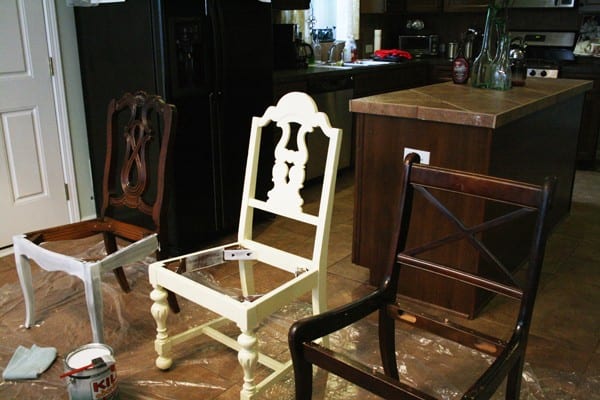 I started with some killz oil based primer. If it hadn’t been February and cold outside, I would have knocked it out with spray primer. But I was lazy, and preferred not to catch pneumonia, so I went for this. When it was dry, I topped it with some spare paint I had in the garage, but it’s very close to my usual Chantilly Lace. PS. Latex can totally go over the oil based primer. I prefer oil based for less brush strokes. Just FYI. I then topped them with a subtle tea stain, to give it an older look using this technique, here. 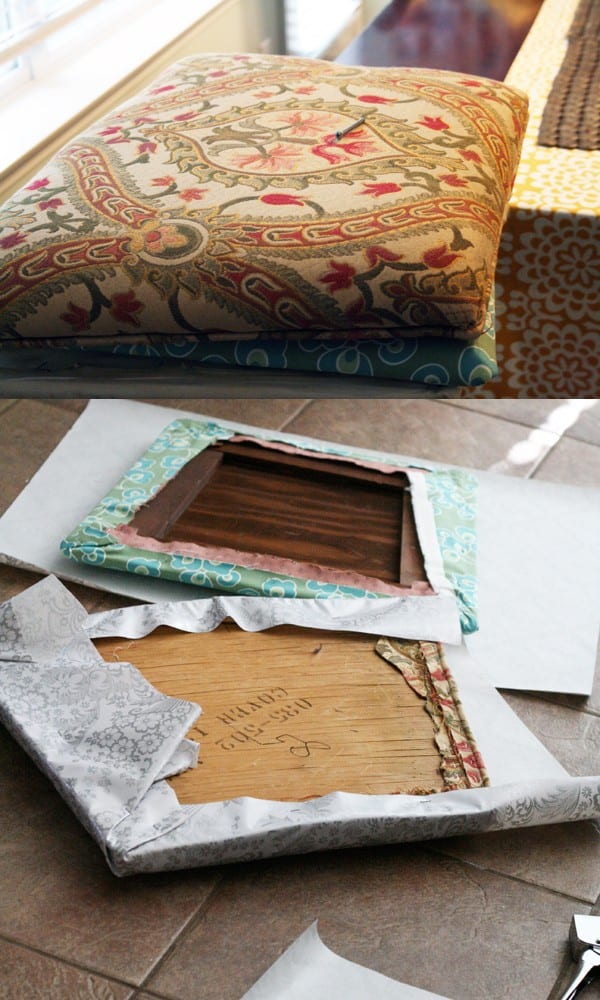 In between coats, I decided to reupholster the chairs in none other but some tried and true oil cloth. I didn’t even remove the old fabric, because, well, why bother. I actually scored the oil cloth at this little etsy store: a great source for such. But I loved the subtle, quiet, different look in the design, and its metallic sheen. I may change the look one day, but these guys have most definitely made clean up so. much. easier.  To reupholster, simply lay the cusion face down on a generous piece, and equally staple around each side. 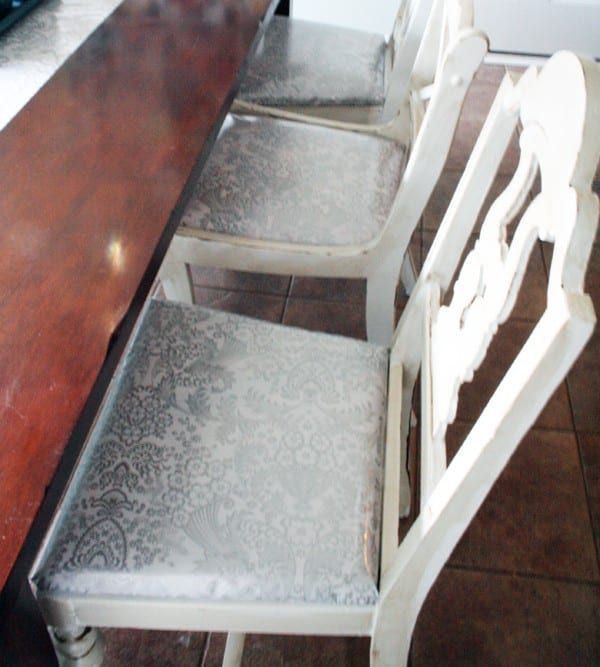 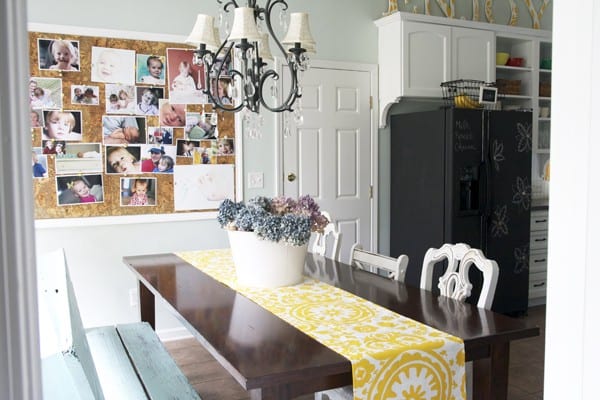 We added an old park bench we literally stumbled upon, from white house antiques for a completely super cheap price…and it was perfect for the kids. They actually dance on it. Frequently. And…my kitchen now, in fact, takes it like a boss. 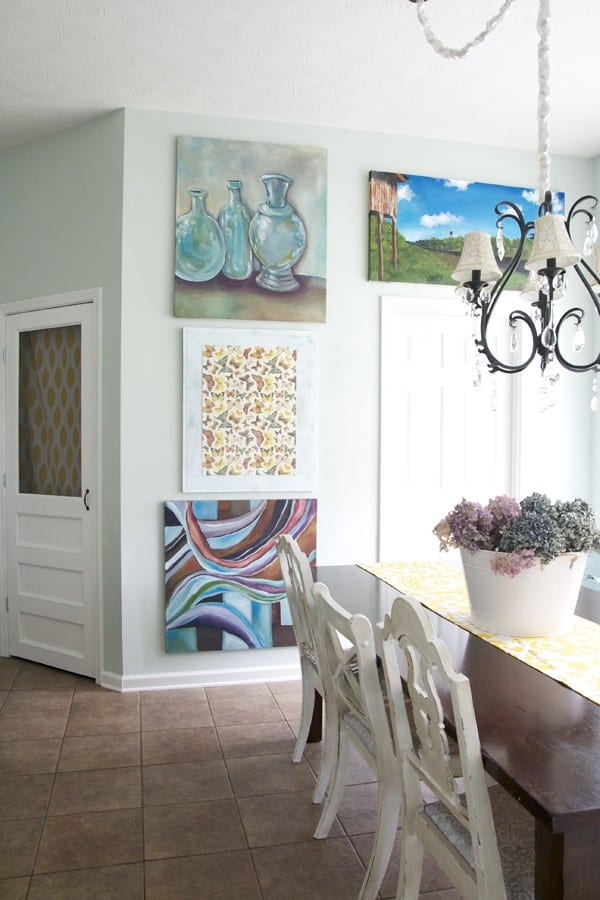 That was the beginning of the great kitchen changeover of 2011. Read more about that, here and here. 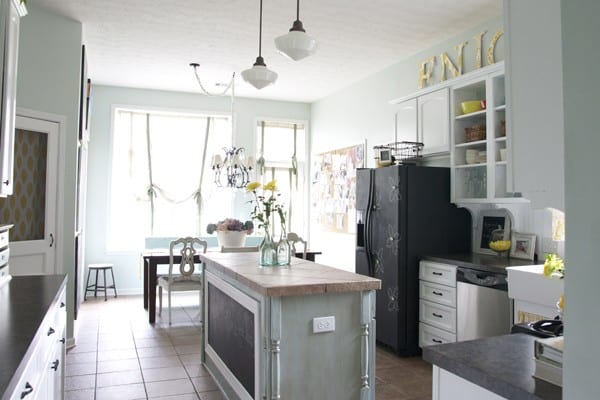 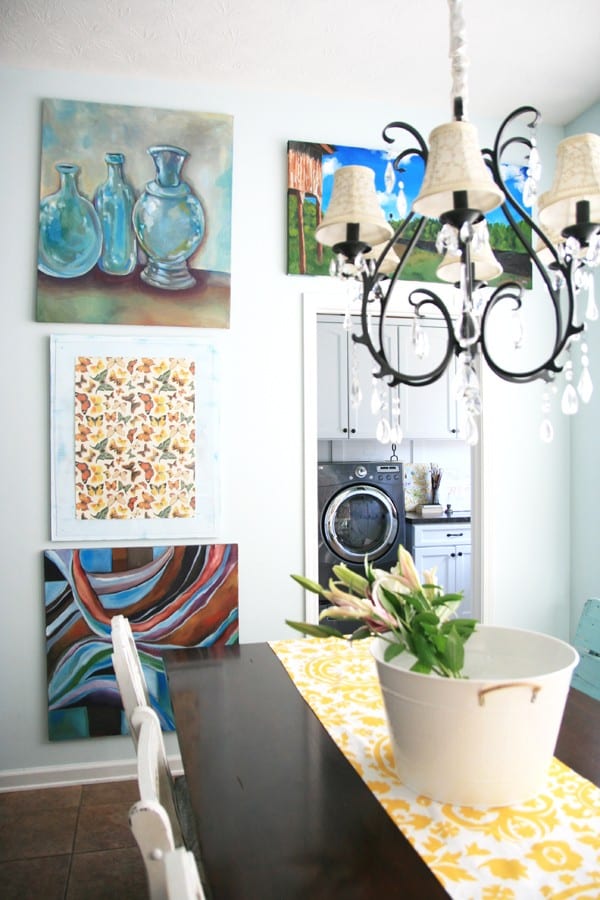 So there we have it. Two simple projects, that require a little elbow grease, but can make a big difference in a space…I hope that helps, Kelly. For those of you who are looking for somewhere small to start, you’d be amazed at how good you’ll feel after painting something simple. ;} Remember, it certainly doesn’t have to be big…for a start. As a college professor once bestowed her wisdom upon me: “Paint is the most forgiving medium. You don’t have to be afraid. Just do it. And if you don’t like it…just do it again.”

Here’s to starting simple, and just going for it. What’s something simple you’ve started on, that upped your confidence factor? We’d love to hear your suggestions. Happy Monday, everyone!