You are here: Home / confessions / a little humor / the slipcover grief cycle.

A few of you guys recently asked us how our slipcover has been holding up with three small children. After all that we’ve been through together, the following story is so ridiculous, it literally pains me to tell you what happened.

But let me rewind.

Once upon a time, I decided to redo our living room. 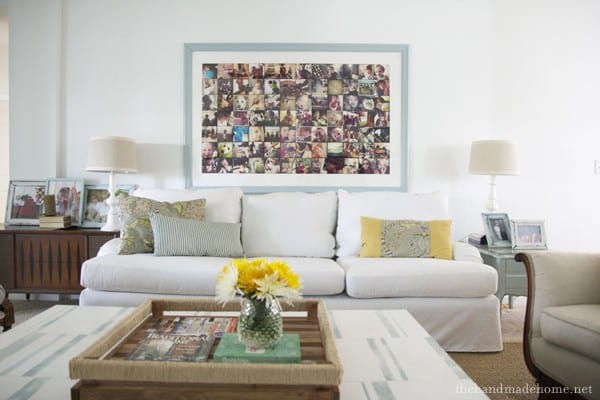 And just like any room overhaul, it was no small task.

Those of you who have been with us for a while, know I suffered from acute dark sofa remorse, and I rambled about it for months while I searched {and even took a few tough losses} for the perfect slipcover-potential-shape. It literally took me all summer to find the perfect sofa for which I’d scoured the southern hemisphere. The other additions {duncan and the masterpiece theater twins} were lucky, and fabulously easy finds, but that last crowning touch would be that slipcovered perfection.

My amazing super duper talented friend Tiffany is the entire reason I was even able to think about pulling that entire room off, and just in time for a few insanely crazy deadlines. 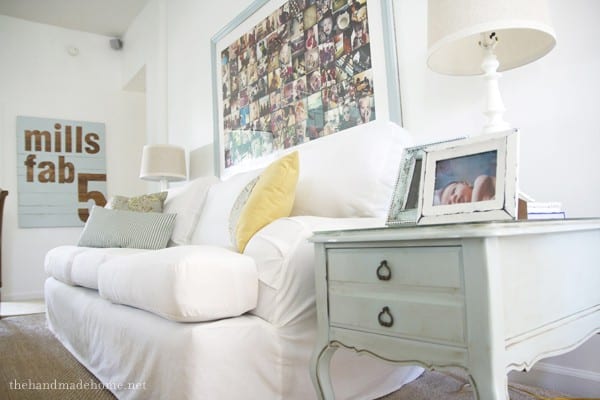 When we were finished, I was all, YEAH! WE beat the MAN!

So, now that you’re caught up: I’d resisted washing my little treasure for a few months until I had time to have Tiffany {oh so graciously again dedicate time to this project} and serge the edges for me. Seven whole months of no washing with three small children is the equivalent to an eternity in smudges, nervous living, and mini scrub sessions to make do in the meantime.

Since our house is officially off the market, I took it to her, and despite her crazy schedule, within two days she was finished. On Monday, I washed my slipcover. I didn’t dry it, because I didn’t want it to shrink. I’d remembered reading that you didn’t necessarily have to pre-wash your slipcover fabric from numerous sources, before the slipcover was actually made. So, you guessed it, there had been no pre-washing seven months prior. I was kind of on a crunch for time, and just didn’t think it was necessary. All would be rainbows and unicorns in the world of fabric karma. I just assumed that if I just didn’t tumble dry my slip, it would be fine.

You know what they say about assuming.

I was so excited when we slipped the back on late yesterday afternoon. It smelled like fresh laundry, and I was looking forward to a like-new cover. Only, something was wrong. It wasn’t quite the smooth fit I’d experienced before from Tiffany’s brilliant handiwork. Nope. In fact, I think I popped a seam trying to squeeze it over. I stopped, and looked at Jamin. “Should I panic now, or later?” I asked him, from the other end. Usually, he keeps me calm. Maybe it was backwards. Inside out. Upside down.

He had no answer, so the panic crept in. 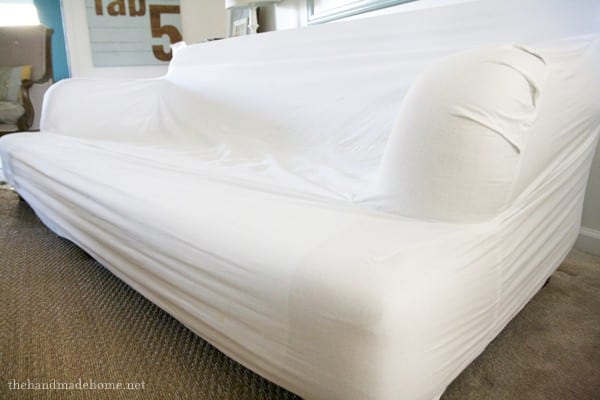 Where the fit had been perfectly generous before, this felt a bit like stuffing potatoes into infant pantyhose. It took us a good ten minutes to get it to the point you see, above. Here’s a little before and after for you… 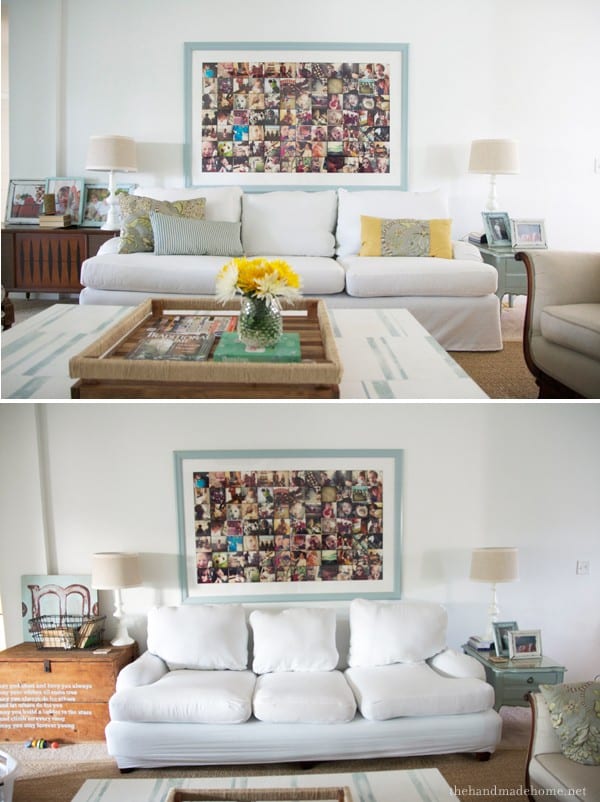 I’ve never taken such a loss on a project before. I think I literally stomped my feet and there was much gnashing of teeth. I felt like my two year old when we tell him no more Bubble Guppies for the night. This one was a real blow.

I ate a little too much chocolate. 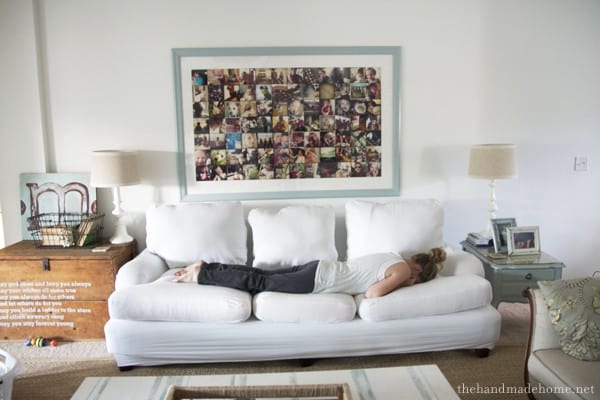 I’m in a slipcover grief cycle. And I can honestly say I have no idea what to do.

Even if it were salvageable, by, say, beating the crap out of those pillows, stretching it with a steamer and adding a ruffle at the bottom…I’m not sure it’s worth the non practicality of it all. I have a family of drooling, food wearing, messy kids to care for. I don’t want to add a needy eccentric sofa to the list. Not to mention, it’s officially uncomfortable and lumpy.

I’m not kidding when I say I wanted to throw up a little in my mouth. Jamin finally broke the tension with a “Bless our hearts. It looks like we’re in college.” And then I began the scary laugh. At least I can say that the lumpy, uneven, salvaged furniture was, in fact, paired with the same bad decision making skills I sometimes suffered from circa 1999. If only I’d pre-washed my fabric.

At what point do you draw the line at what you really want, all for the sake of practicality? And sanity?

When I texted a friend, she put a positive spin on it. At least now, you can get your dream sofa.

Can I get my dream sofa? I thought I had it. Do I still secretly want that chesterfield I’d dreamed of? Is that a temporary craving or is that forever? I don’t even know who I am anymore! I didn’t even prewash my fabric! WAH!

I know. First world problems. But this one hurts a little in that deep regrets, hindsight is 20/20, this is so unnecessary and I hate to tell my amazing friend Tiffany what I did… kinda place. 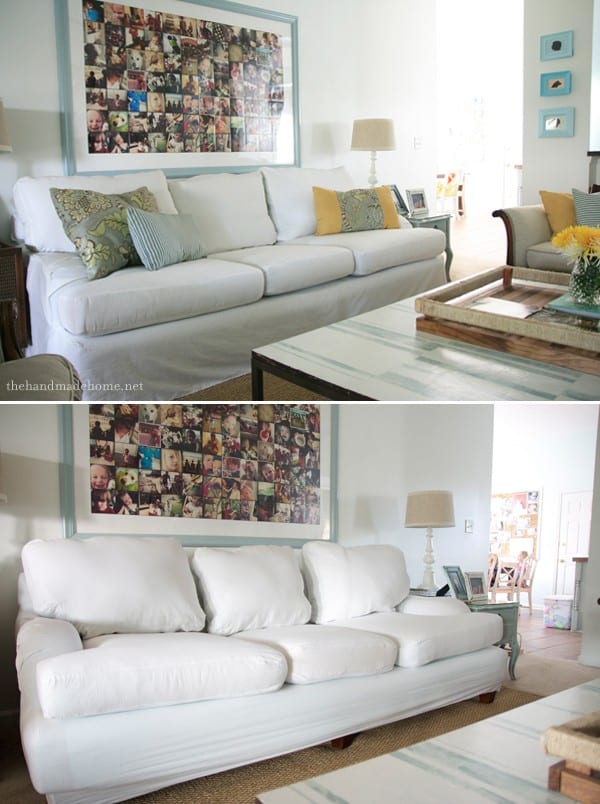 Let this be a lesson to us all. Always pre-wash your fabric? Research what you’re buying? {I’m thinking I also had some bad fabric.} Dry clean your slipcovers? I’m just not sure where it all went south. All I know is that I can’t look at my living room for a while. At least not until I know exactly what I’m doing, right after I pull myself back up by my boot straps. 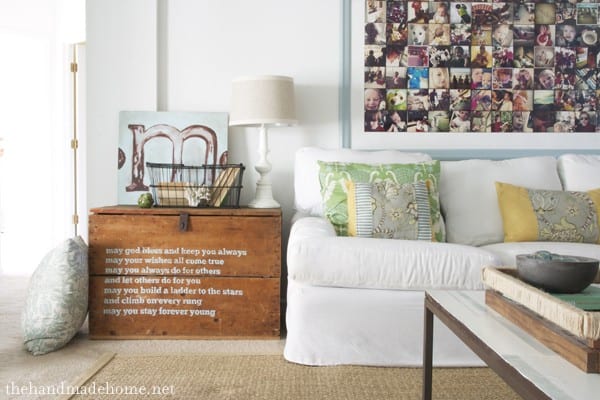