I adore summer. It’s by far, my favorite season. I love the fireflies and the sunshine on my skin and sparklers over wet, fresh cut grass on slower nights. I love the mindless summer movies and fun activities with the kids and a chance to breathe and sleep in just a little. Really, I think it’s a gentle reminder. A chance for relishing these slower days. Afternoons at the library, thumbing through delicious books with their signature smell. Popsicles melting onto your hand and the scent of rain on hot concrete. But there’s just something about summer.

It’s no secret around here, that as a result, I kind of resent fall. I’m all “Slow your roll, Tina!” when people break out their pumpkins in August. It’s offensive when I’m still relishing the moment, and culture is ready to leap forward. I just want to freeze time. Bottle it all up and soak it in, forever. It’s a chance to cherish the present with just a little less distraction. I think it doesn’t help matters, that we celebrate the boys’ birthdays and our anniversary in the summer months so the passing of time and my propensity to wax nostalgic, intensifies.

I was reminded, oh so poignantly the other day, that we have three summers. Three more summers until our oldest graduates. Time is a deceptive thief.  So its existence is not only a gift, but a luxury. 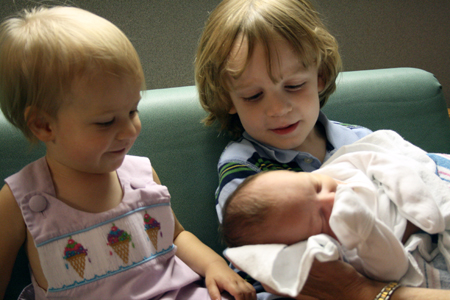 I know my days as a mother are not automatically over once they graduate. I know it’s really only the beginning and if I’m doing it right, it just gets better. Can I throw an obligatory “blah blah blah” in there?

Because I also know that I want to cherish where we are now. This season is just a reminder to me, of how much time we really have left.

It only seems to go by a little faster each year. But I want more time with them.

Never ending brunches and cheap pizza while we binge watch Stranger Things and pool days in the back yard, with laughter until my stomach hurts and I can’t breathe anymore… forever.

My youngest {almost thirteen} still doles out hugs and affection as if he’s three. I know one day it may stop. The middle tells me everything, down to the last conversation with her friend on the phone. I hope she still feels this way in five years. And the oldest sends me funny memes and has the brightest sense of humor that constantly has me in fits of laughter, in the most unexpected moments. {I’m pretty sure this is just the beginning.} We love creating space and watching them grow as their own people, while they evolve into who they’re meant to be.

I went for an appointment this past week at the local imaging center, but I’m fortunate to say I got the all clear on suspicious spot{s} they’d found earlier last year. I took a deep breath {and a deep plunge into the unpleasant world of medical bills} but at the end of the day, I’m grateful.

I found that I was emotional about it that night, and I was surprised by that. I thought I’d processed it all, but I was shocked by how much it actually affected me.

It was a poignant reminder that living life as we do now, is a real privilege. To think about anything else beyond the basics, is colorful icing on top of my currently obsessed-with-stained-glass cake.

I’ve been so caught up in our business and stressing over the little things in our personal lives and finishing out our house to get our kiddos settled, that I never want to miss that in-the-meantime phase. The whats-happening-now phase. I was fortunate enough to get the all clear. Life isn’t always smooth sailing with clear skies, and it doesn’t always work out the way we think it should. Oh, I can list the ways it didn’t work out, if I’m focused on all the wrong things. I think that’s why we’re taught to embrace life as we currently have it with all the imperfections.

We all take out blows and wrestle our demons. But I need to appreciate where I am now with the imperfect parts, too.

I need to cherish those belly laughs, and notice the little things. It’s not lost on me that the younger two are still hanging out together, in their room every night, despite the fact that they’re “split up” in their own rooms. Last night, all three of them were connected together on the same game with numerous friends via Minecraft. That the oldest, for now, prefers to spend his days and nights at home and around us despite the fact that he has his license and essentially, his freedom.

These are all photos from summers’ past. When they’re shown to document the passing of time, it becomes a little more poignant how quickly time flies.

The sparkling fireflies I adore so much and see as a little reminder of hope each year, because of their symbolism for me, only last for this season.

So that I appreciate every moment.

This last week with that appointment, was a pause in the middle of our chaos and a reminder to take a moment. Work will always be there. The never-ending piles of laundry and mundane cycle of the dishwasher will be too. The to-do lists and the stress and anxiety of life and what makes adulting feel oh so hard, will never go away.

So off to Sonic we go to try out the latest Sour Patch Slushie, because it looks deliciously awful. We blast Lizzo in our living room for the family dance parties that will always remind us of this summer. Bring on the pool days {even though it’s still currently green} and family tournaments of aqua hockey until my knuckles are bruised. Because it won’t be here forever.

I don’t know what tomorrow holds, but I do know that for now, I can enjoy this moment and what we have right now.

fabulous photography by light by iris

Here’s to soaking up every. single. one.

cheers to the little moments